With alleged good weather in store and some holidays due at work had me poring over the maps to fit in some new hillwalking routes late on last week.

I travelled up on the Friday and stayed at Ballater’s hostel having already done the duo of Driesh and Mayar earlier that morning before heading out to do Mount Keen later that afternoon.

Where I stay in Ayrshire is out on a geographical limb in terms of Munros - they’re all north, considerably - so I took the view for travelling such distance (420miles travelled that weekend) that I would be as well doing some others in an overnighter while in that general part of the country.

The alarm went off at 0445 that Saturday morning in the appositely named Glen Muick dorm. I started gathering up my belongings and getting ready with the aid of my cell phone light to try and minimise disruption to the apparent four other lone users of the facility. Leg-weary, I made my way downstairs and got one last look at the Cairngorms portrait that dominates the landing in the stairwell which I found alluring the handful of times I past it. I then had breakfast and finished getting ready before taking the short drive to Glen Muick car park.

It was five pounds for cars and double that for campervans for the day. Signs nearby have been published on behalf of the Balmoral Estate assuring that all costs are reinvested in the 100km+ of pathwork maintenance alongside biodiversity programs. I remember reading a lengthy thread on the cost of parking on this website for here and ensured I had plenty of change should they not take a card payment.

I then embarked on an almost three hour walk to get to the summit of Lochnagar, Cac Carn Beag. It is a long walk in and having studied the main walkhighlands report, I admit by going the main path route rather than the recommended ‘ladder route’. The ladder certainly sounds more fun and enjoyable but being on my own and the mist being down from below the 800m mark, the views probably weren’t visible anyway. I still had some boulders to clamber over as well so care is still needed if you choose to go this way too. Once that is out of the way, it is “cairn city” as a line of cairns keep you away from the steep Corrie of Lochnagar at your right hand side. I then past Cac Carn Mor before having a look by the West Buttress & Pinnacle marked on the map. As impressive as these cliff features are, the views were non existent on this day as seen below. I then went onto the Cac Carn Beag summit to which there is a trig pillar and viewpoint locator which was of no real use on this day. The rest of the walk if you are choosing to do the quintet is predominantly a broad ridge walk and most of the elevation for the day is gained. From looking at my timestamps from my photos, between each munro from herein was just under and hour and that was including taking a few minutes on top of each one for drinks and refreshments. Although, if you commit to completing the loop, it’s worth noting that to the car park from the final Munro of Broad Cairn it’s over six miles and that part had taken me just over two and a half hours.

I then retraced my steps to Cac Carn Mor and forked right onto the path to the where there is a cairn at the 1083 point on the map which is an easy task to Carn a’Choire Bhoidheach. The sun was really trying at this point to break through but to no avail. For the rest of the day on the plateau the weather ranged from mist to light rain throughout. 
I headed back to point 1083 and made my way onto the halfway point, theoretically, of Carn an t-Sagairt Mor. There was a couple of streams to cross over and kept to the path. There are two cairns and the southern one is reported to be the true summit. I went to them both and carried northwards anyway as I wanted a look at the aircraft wreckage which was only a minute away. There are several crash sites I have visited on the smaller hills of Clyde Muirsheil Park (Blaeloch, Irish Law & Box Law hills) which is not far from me and I have visited at times so I am accustomed to seeing such things. It was surprisingly in good enough condition, but, disappointingly, someone has moved some of the parts and started decorating the northern cairn with some of the smaller fragments as posted in photo below. So it was onto the pentad’s penultimate peak as I headed off in a southeasterly direction into the light rain being overtaken by the occasional fell runner heading in the same direction. The landscape was pretty bleak and I just soldiered on at this point. Cairn Bannoch came into view and I climbed atop and got a very brief visit to the summit. The approach to Cairn Bannoch 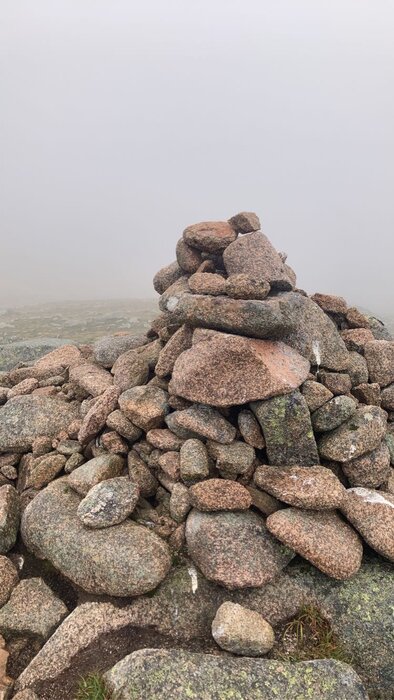 It was 1130 now as I made my way back down and onto Broad Cairn. With it being later in the day people were heading from here now possibly doing the loop in a clockwise direction as I picked them out in the distance through the mist. The path was still visible enough though and this made for one of the shortest legs of the circuit. 
The path to complete the circular route at this point needed care. It requires climbing down a couple of boulder fields to begin with and I had to keep looking ahead, surveying and picking out the path as it came and went over the said boulders. I then took a left and the path skirts the southern side of Loch Muick and was satisfied at being out of the mist and having good views of the area from higher above. As mentioned, it is a long walk back to the carpark from Broad Cairn and I started to take in the views from the lower levels of the slopes now things were clearer.

By Munro standard, my hillwalking forays will be getting scaled back now with winter around the corner and the short days that it brings. It’s maybe not quite over til 2022 but certainly epic weekends like that may need to wait til the spring now!