Hadn't been on the hill for a fortnight as we'd been to a funeral in Skipton with the Bradshaws and had stayed for a few days - so an easy day planned.
It was due to be hot as well, so we had to pace ourselves.
GordonC had toyed with the idea of knocking off the last of the Grey corries from Glen Nevis, but saw the forecast temperatures and decided this mostly tree-covered route was a better option. As it turned out, it was a gey sweaty day, as there was no breeze whatsoever.
Picked up Harvey and headed for the Cabrach.

Clayshot Hill
Managed to park in a layby a wee bit up the turbine access track. Couldn't spot the firebreak initially, so plunged into the forest to explore...... 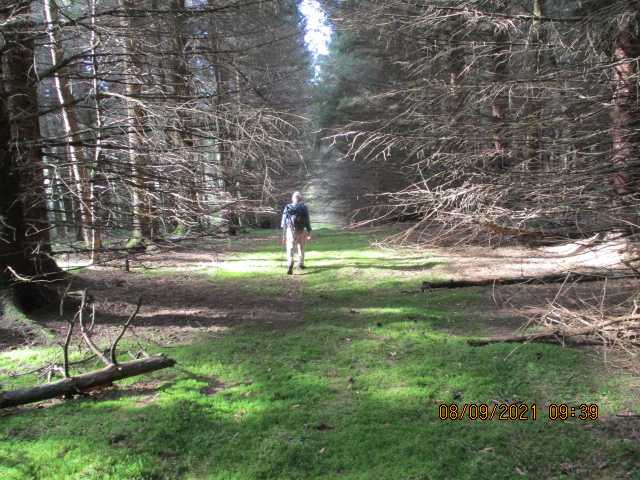 
Soon stumbled on the firebreak and found it easy to plot a route up through the trees. A bit of moose-stepping up the heather to the wee tor at the top. Returned the same way. 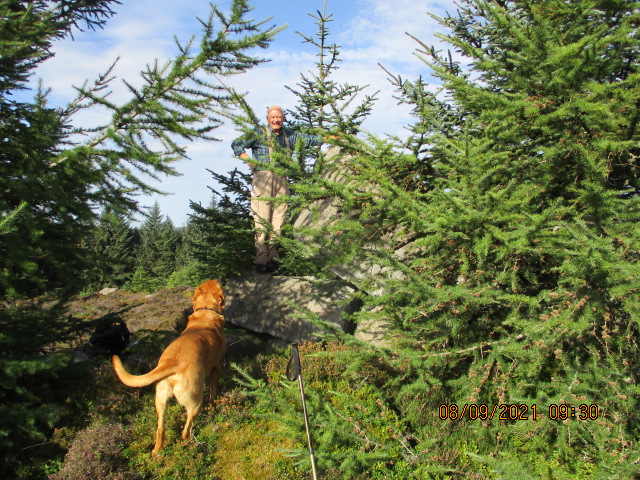 GordonB at the top of Clayshot's tor - H mystified

Drove up the tarmac road to just before Oldmerdrum and parked beside a couple caravans and a poly tunnel. A grass path had been mown around the caravans and steadings to the track up the side of the forest.
The top of the hill had been clear-felled so we followed some forwarder tracks across to the top.
Just as we were starting to wander around to establish which bit of ground was highest, a person appeared from nowhere, so we started to chat. She was a forest ranger for the estate and let us know that the area was about to be re-planted next day - so we escaped the machinery ! GordonB chatting to Jackie the ranger at the top of Oldmerdrum

Jackie was also a Bennachie Baillie too. She graciously took our photo then we parted to our different destinations. I think she was marking out planting pitches with a handfull of bamboo canes and a pocketfull of yellow tape. We walked over to a cane with a piece of white tape attached, which looked like the highest point. Top of Oldmerdrum with Tap o Noth behind

A wee driving faux pas when we overshot the road end for the Clashindarroch glen and went down the the next glen.
The mystery places were soon identified when we hit the end of the road and all was revealed! A wee backtrack round to the next turnoff - this time paying attention instead of chatting ! ( We'd both printed off our paper maps which excluded the turnoff - but no excuse - doh )

Parked up at the bottom of the hill where the track was marked by a pile of gravel and a bull warning notice which adorned the gate. 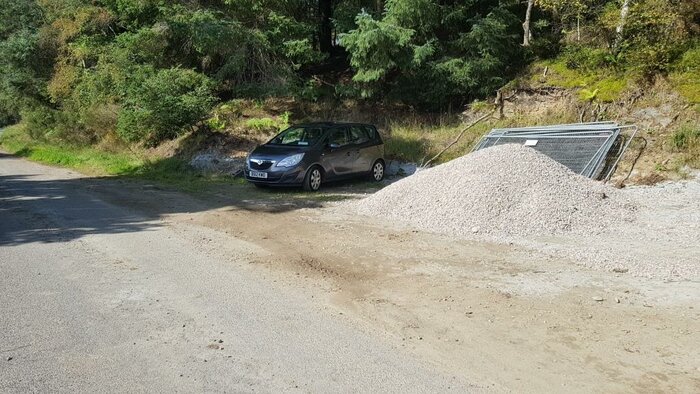 Way-markers at the start of the track up Kemps Hill

Followed the track past a comms mast (which we assumed the gravel was for ) and into the field. Above us we could see a mixture of kye and sheep grazing - among them the bull that was advertised on the gate below. The beasts ignored us, as it was too hot to do anything but graze. The track ended at a feeding station, but it was easy going up the grass field.
At the top of the field was a steaming heap of dung which we passed until level with the highest point.
We hopped over the BWF and established where the spot was - marginally higher than the dung heap. The forest beyond had been clearfelled, leaving a narrow band of trees at the spot. GordonC performing BWF gymnastics to get to the spot of Kemps 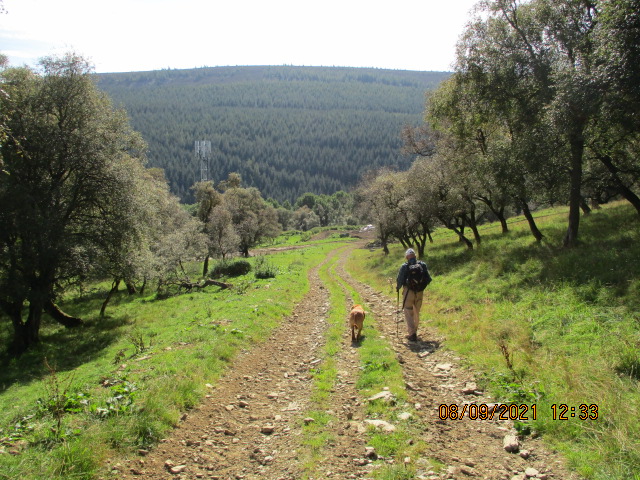 Descending the track on Kemps Hill near the comms mast

Parked up at the edge of a passing place, as we didn't like to park at th end of the lodge drive. Walked back along the road then up the grass at the side of Clashindarroch lodge. There was a van and car parked by the lodge which turned out to be workies, so the lodge wasn't currently occupied.
Negotiated the two fences encompasing the glebe at the back of the lodge and then up through the forest to gain the track going in our direction with a bit of a zig zag. Plunged through the wood again to gain the highest track contouring round Quarry Hill. The contouring tracks of Qharry Hill

Near the W top of Quarry, we headed once more into the trees up a break and emerged onto the top area.
The heather moose-stepping up to the top wasn't too bad and was ameliorated by the occasional waft of breeze, thank goodness.
No cairn at the top, but an old fence strainer over the way a wee bit. Top of Quarry Hill with Tap o Noth behind Harvey by the strainer near the top of Quarry Hill

Took our pics with Tap o Noth behind then headed down - driven by the Clashindarroch flies who had found us again.......
Glad to get back into the shade. We took the track loop down instead of ploughing back down through the trees.
Lower down, we spotted a path emanating from the lodge that skirted the fences round the glebe we had crossed on the way up, which we headed for. Emboldened by the lack of occupancy at the lodge we walked round the back yard, then back down to the wee style at the bottom of the garden and along the road to the car.
Had to keep feeding Harvey water, as the puir soul was still wearing his fur overcoat on the hottest day of the year !