4 Munros of The Grey Corries

4 Munros of The Grey Corries


MWIS had said 80% chance of cloud free munros, staying dry and very little wind. The latter points were correct, though unfortunately I managed to pick munros that were in the 20% of not being cloud free, at least until the latter part of the walk. Still an enjoyable day though. I'd thought I might do the 3 munros on the full ridge walk one day then Stob Ban the second day, but got there and realised I could do all 4 in one walk (so did the 2 corbetts the second day instead). Saves my tyres having to drive all the way along the rough track again doing all 6 hills from there in one trip.
(Route map is right, just with the slightly wrong start/end point, as I was parked at the track junction) 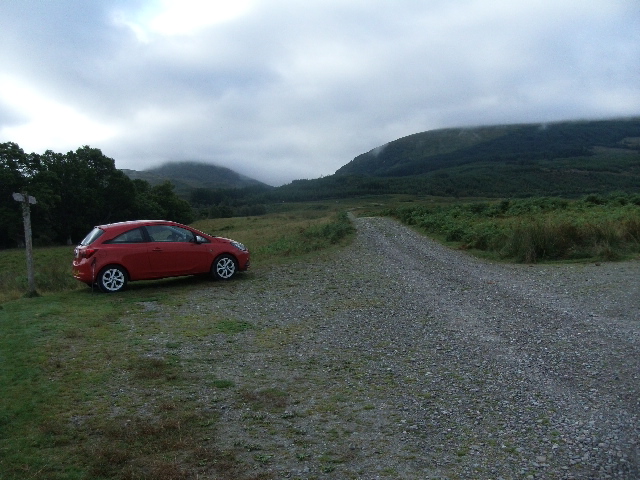 Parked at the track junction, though there's room for more vehicles further along the track 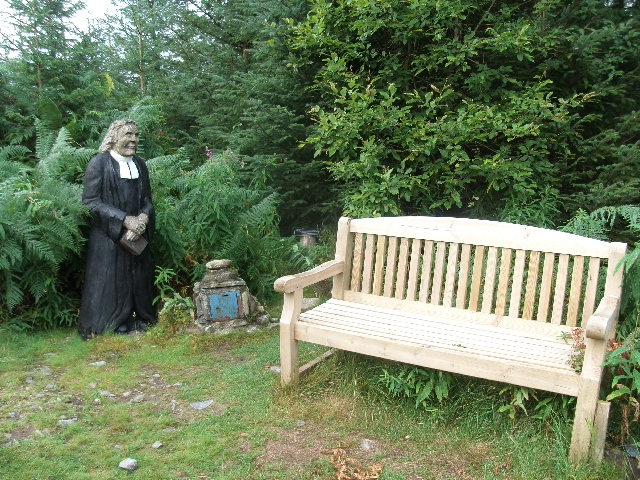 Got a bit of jump when I saw the slightly creepy looking Wee Minister. Same the next morning too when I walked past it again! 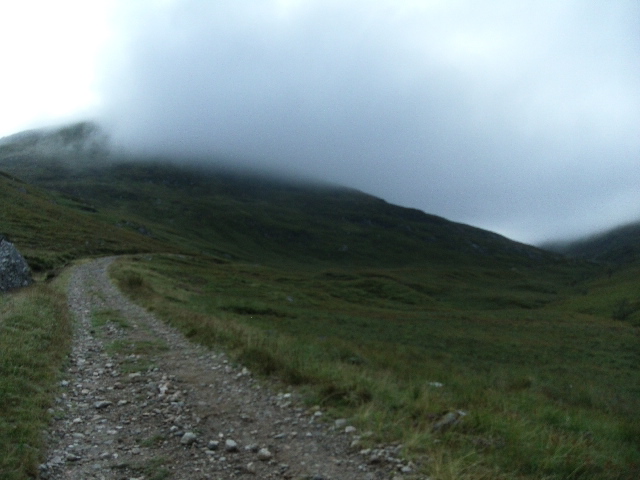 Corbett of Cruach Innse in the clag on the left of the Lairig Leagach, the munros on the right were never visible today as I headed up the pass. Fortunately I was back to do the corbetts the next morning in beautiful weather to get the views I'd missed today. 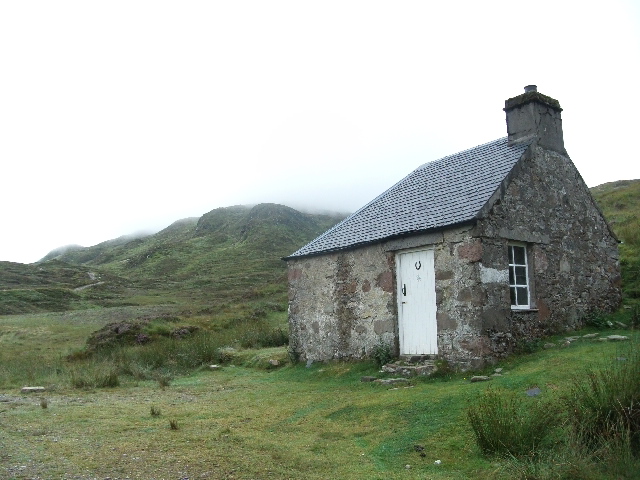 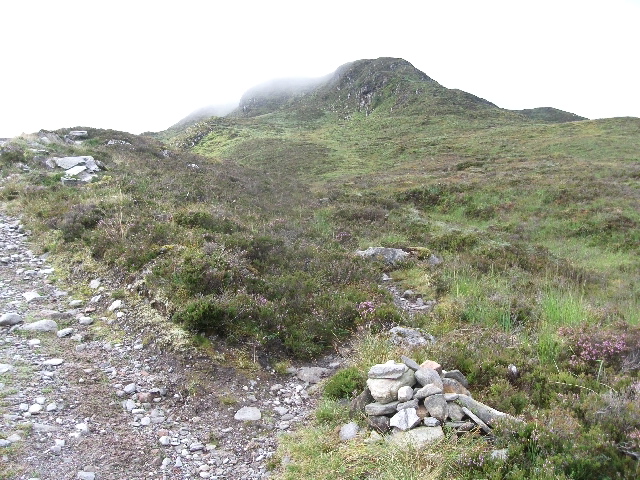 Wasn't sure if I should have taken a boggier path off to the right very soon after crossing the burn, but then a short distance later came across the drier, clearly marked path leaving the track to head up Stob Ban 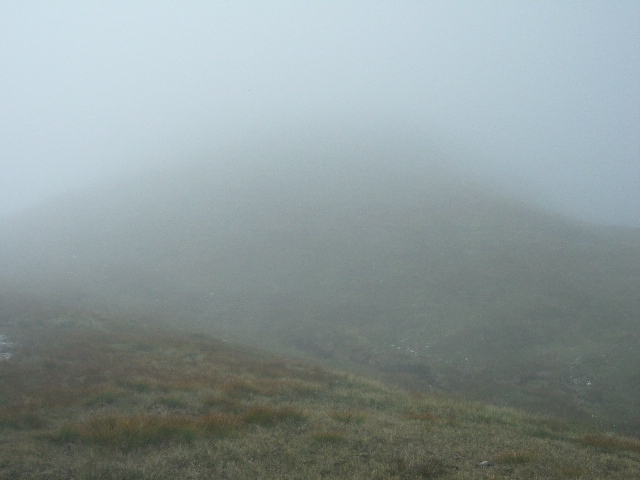 Plodded up the ridge with no views to distract me... 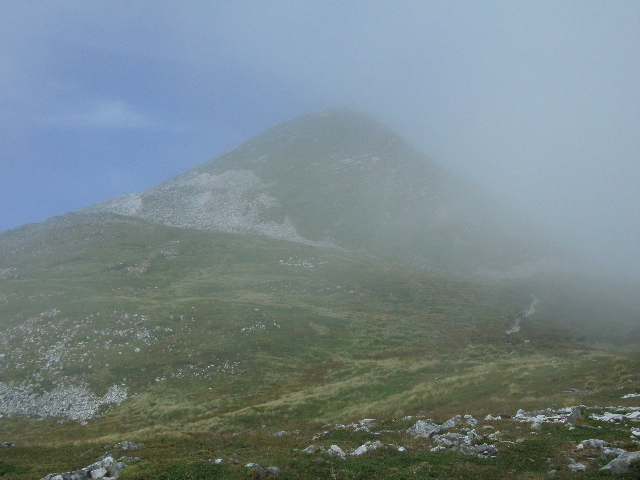 The cloud cleared briefly at one point, nice to see what I was heading for. I thought this was the start of the clouds completely lifting for the rest of the walk, but alas, no. 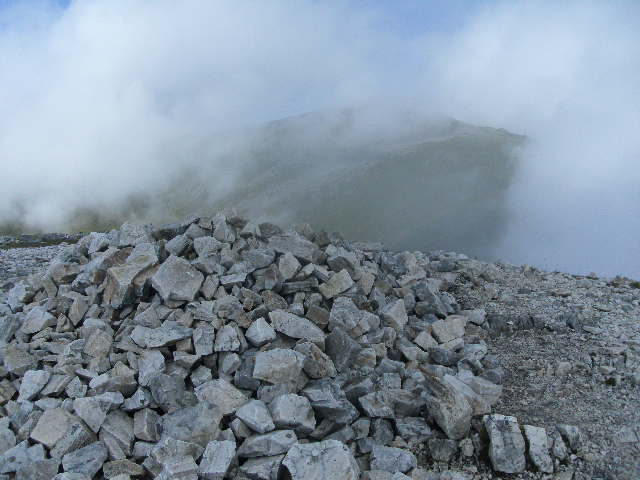 The best view I managed to get from Stob Ban's summit. I did wonder whether to do this hill on its own and then do the other 3 munros the next day, but thought I'd at least have a look at the steep scree path down the other side to see just how bad it was. 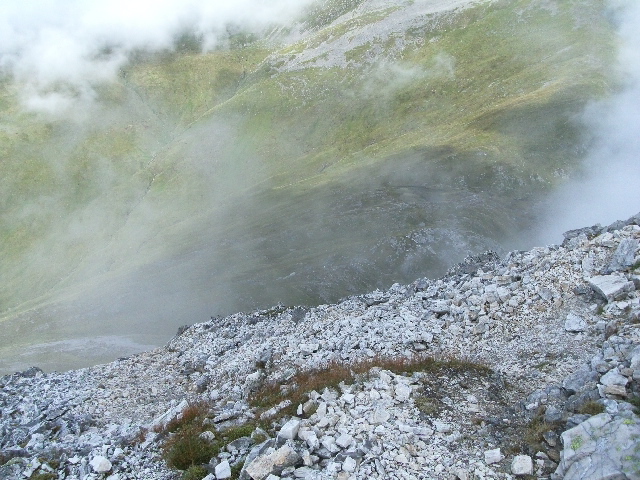 Had a look down the scree, and the path(s) zig zagging down looked okay, I've managed worse...so I continued the walk, heading down towards the small lochan on the bealach between Stob Ban and the next target, Stob Choire Claurigh 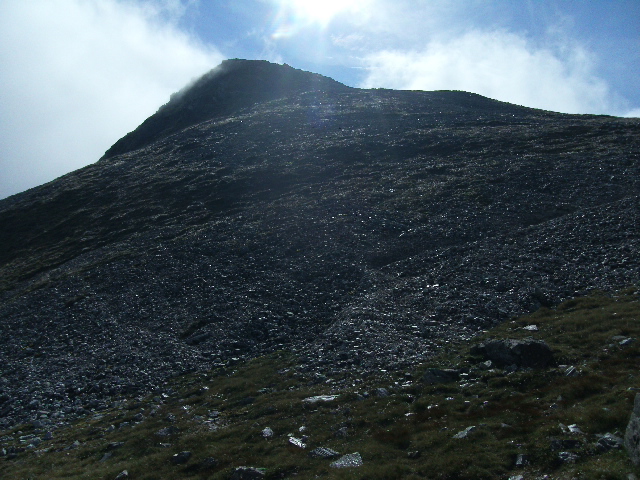 View back up the scree to Stob Ban's summit having made it down without any problems surprisingly. I have a healthy dislike of scree descents since falling on one in Skye and being very lucky to get away with ruined trousers and a leg wound I glued closed to be able to continue down. Stob Ban's scree descent was nowhere near as vicious! 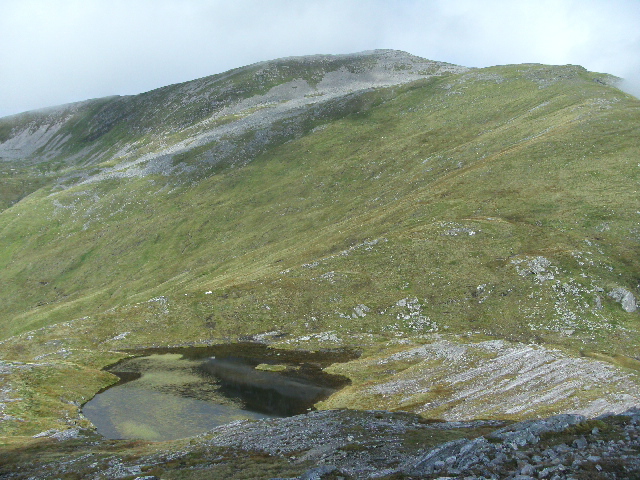 Continuing down to the bealach and lochan, the ascent up Stob Choire Claurigh ahead was grassy, then boulders higher up, but all starightforward 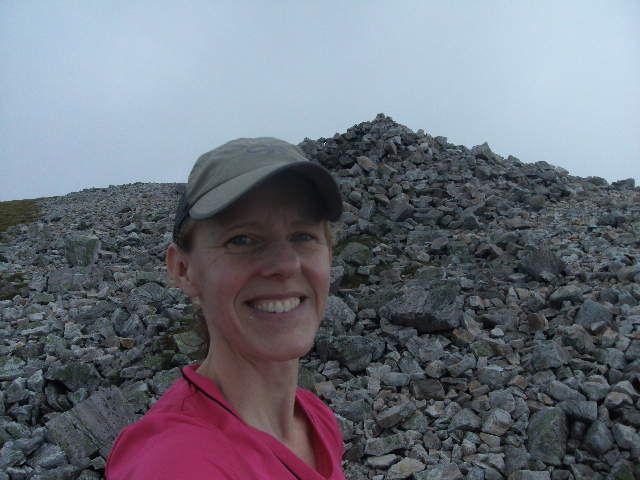 No views from Stob Choire Claurigh's summit cairn, so I'll chuck in a rare summit selfie instead 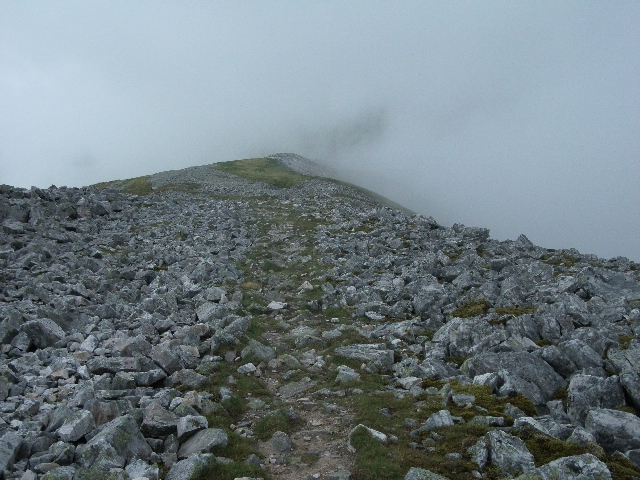 At least on a narrow, well trodden ridge walk, it's generally fairly obvious which way to go 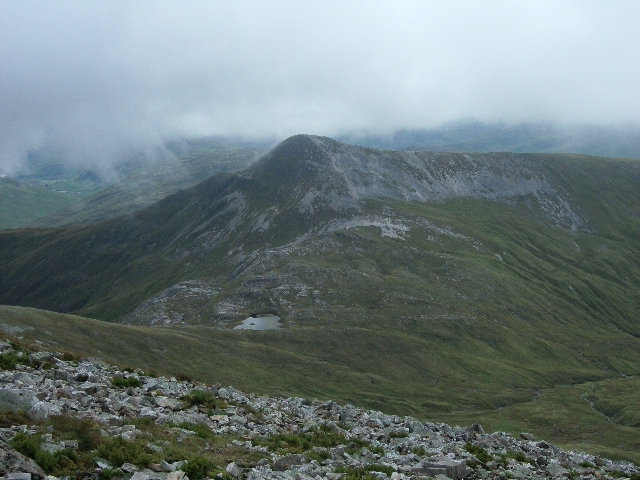 Once on the main ridge, Stob Ban looked small in comparison any time the cloud cleared, I wouldn't have looked over and thought "that's a munro" 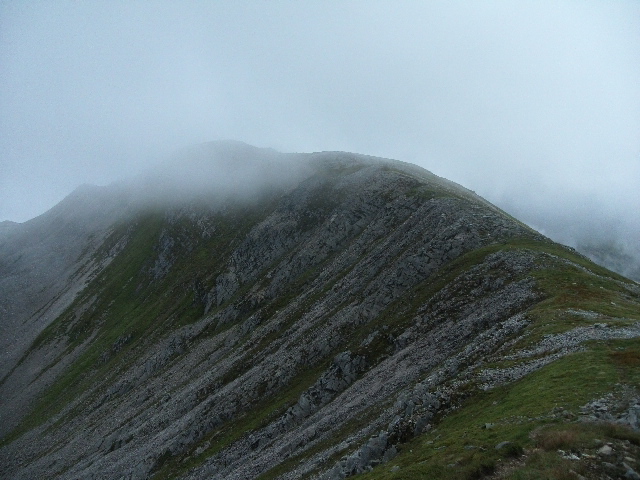 Tried to take a photo whenever cloud lifted - this the view back to Stob Choire Claurigh. 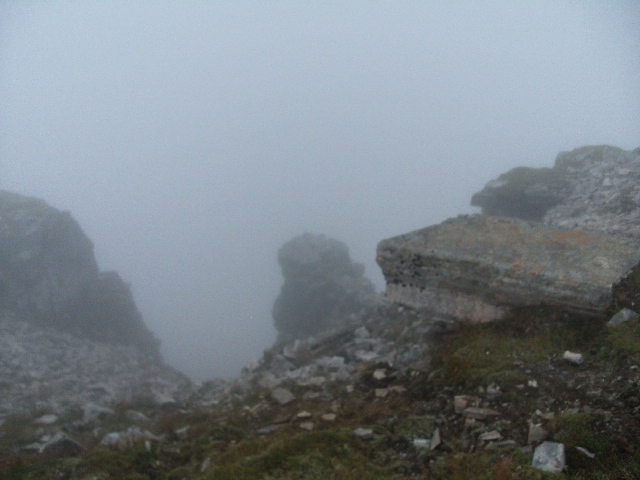 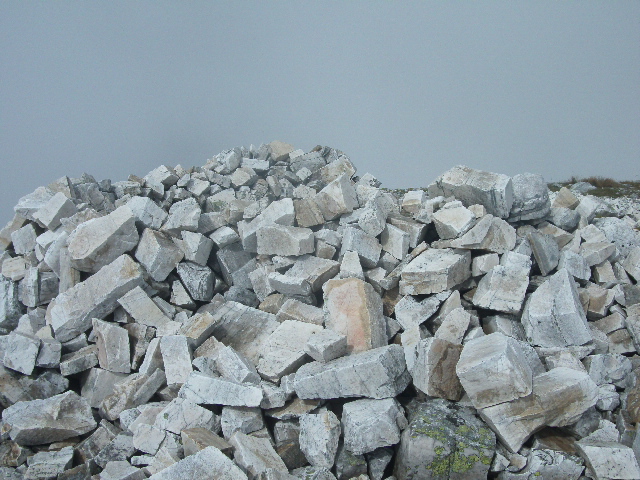 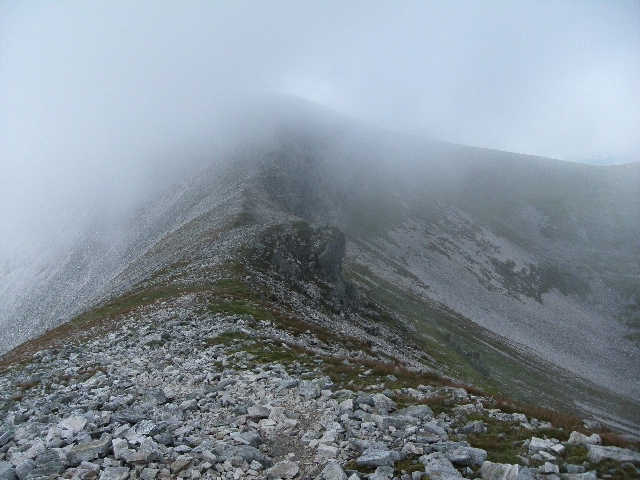 The glimpses of the ridge were impressive when they came, but it was a shame not to have unbroken views throughout. Still, it stayed dry, warm and with little wind throughout the day, so I can't complain too much 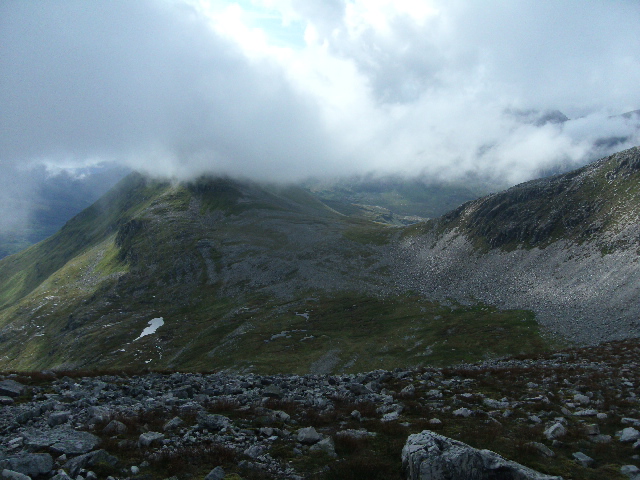 Heading up to Stob Coire Easain on the right (not one of the munros on the ridge), it was looking like the fourth of the munro of the day, Sgurr Choinnich Mor, on the left, would have its summit in cloud for me too 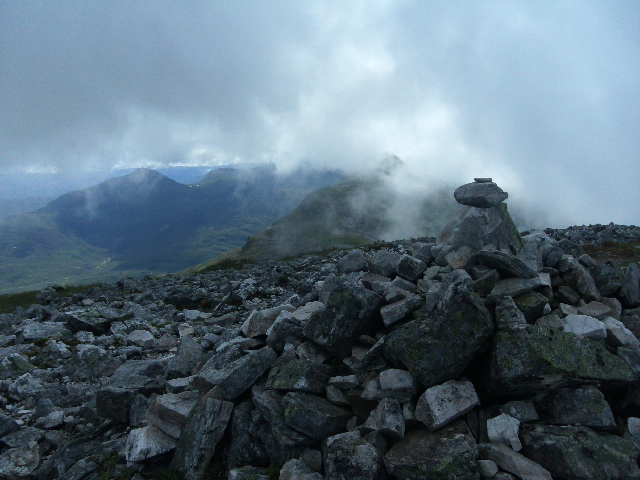 ...but the cloud started lifting a bit higher as I got to the top of Stob Coire Easain and at last I started to get some views. Better late than never! 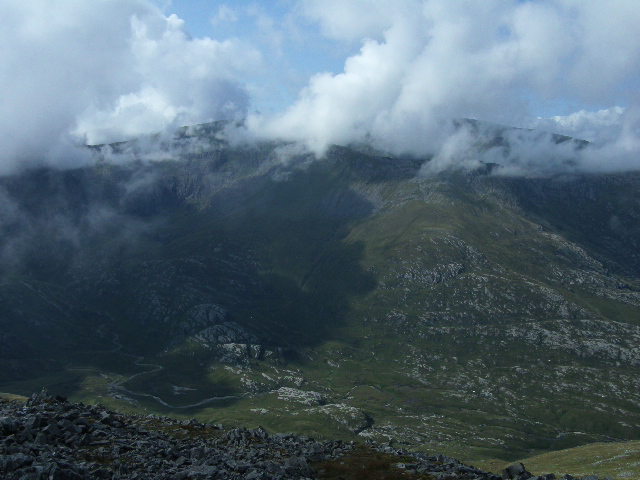 Aonach Beag and Aonach Mor started to make an appearance 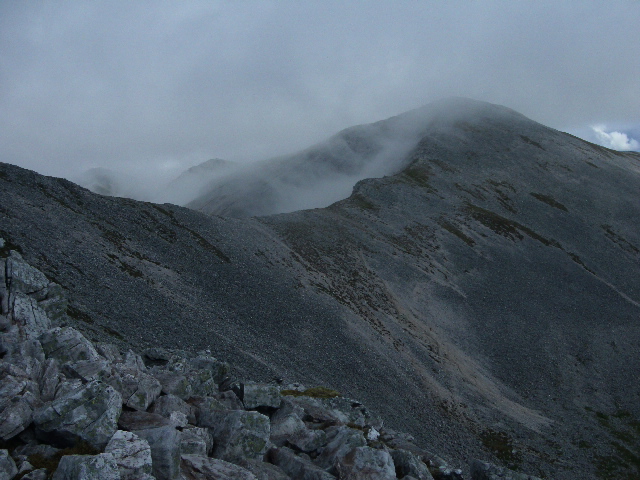 When I'd been walking along the ridge in the clag, I'd had no idea it looked like that! 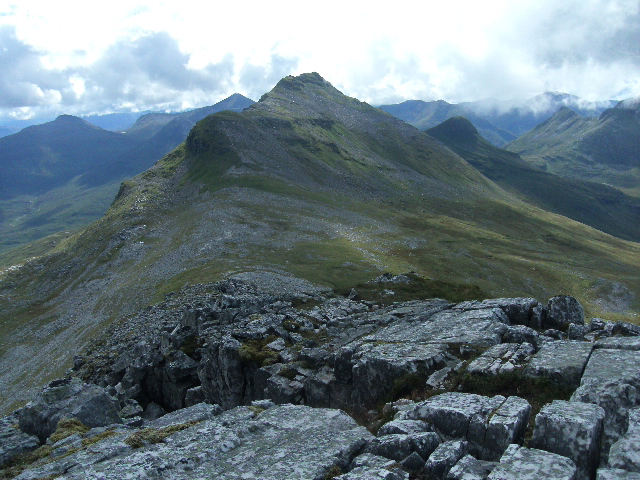 Heading down the slabby, rocky ridge towards the now-clear Sgurr Choinich Mor ahead. On the way down this section, twice I veered too far off to the right, once on a good path which went too far off direction, then when I got back on the ridge, I went right again down a small gap/chute, which was okay but not as good as just sticking to the centre of the ridge on the rocks and slabs all the way. I did that on the way back up and it was a really enjoyable semi-scramble. 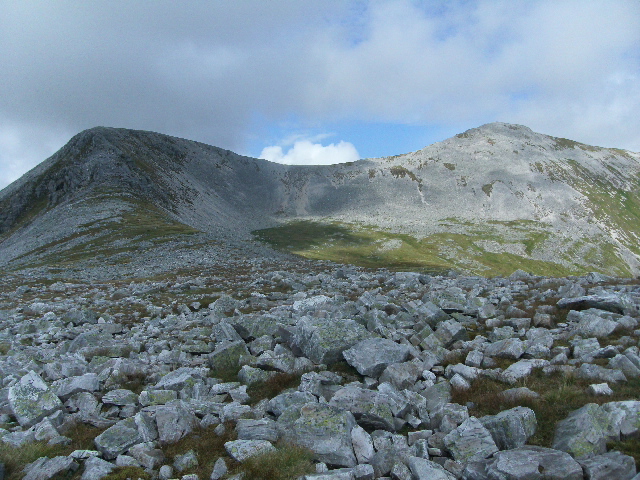 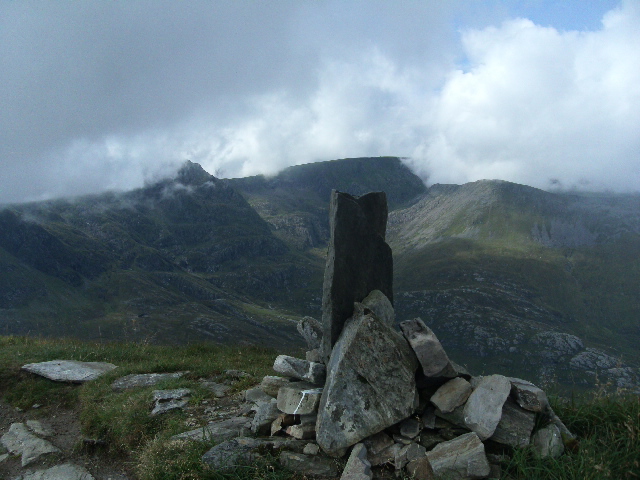 At last, a munro summit not in the cloud I returned down and back up to Sgurr Choinnich Mor, then took the descent down NNE. Once on the grassy section, I got to look back at the west side of the Grey Corries ridge, summits still in and out of the clouds 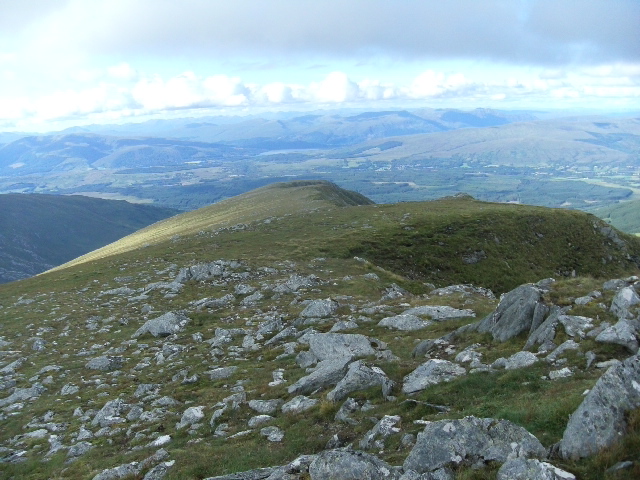 Nice easy descent down the grassy ridge, which then dropped down towards a forestry area with a gate to aim for

So I didn't get the spectacular views people get in perfect weather, but I stayed the night, and got great weather for the 2 corbetts the next day at least

Re: 4 Munros of The Grey Corries

Great report with excellent information for those of us planning this (someday 😃).

Sorry you didn't get the views that your efforts deserved.