8.30am on a Monday morning and I find myself sat in the Vauxhall garage again...... Now the summer is here I have gone back to working weekends and only having Mondays off..... And as this was the only day I could get my car in the garage I took the car in first thing and told them I would wait. I'm not gonna waste my only day off without a car so I planned this walk knowing even if I didn't start till noon there should be enough time to get at least one summit done before it got dark.
Finally got my car back at 9.30, back home to pick up my kit and wife and headed north.
We got to the parking area on the A832 just before 11am and noticed how quiet it was, We were here a few weeks ago on a Sunday and the parking area was full by 9am (So having a weekday off isn't always bad). We set off up the track toward Loch a Bhraoin. After about a km we crossed a small bridge on our left which took us on a track through the plantation. This is before you reach the boathouse and I highly recommend you take this route as the path which takes you to the boathouse and beside the side of the loch is very boggy. We then reached a much bigger bridge over the loch. 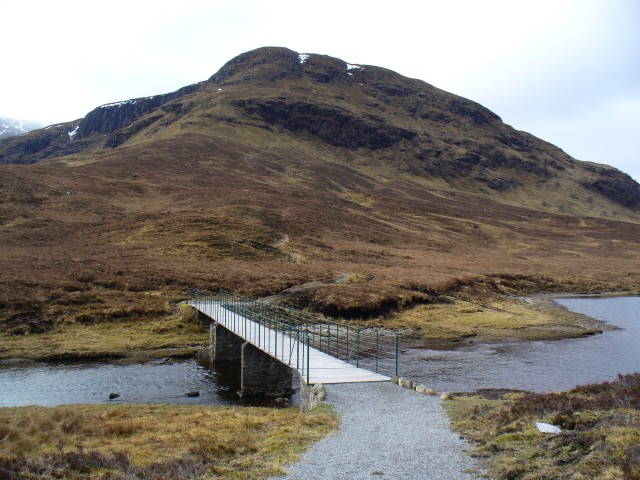 We followed the stalkers path for about 100m knowing that there was supposed to be a track leading us up to Leitir Fhearna. We didn't see this on the way up and ended up going over rough ground as we could see the path higher up and realised that we had missed the turn off. 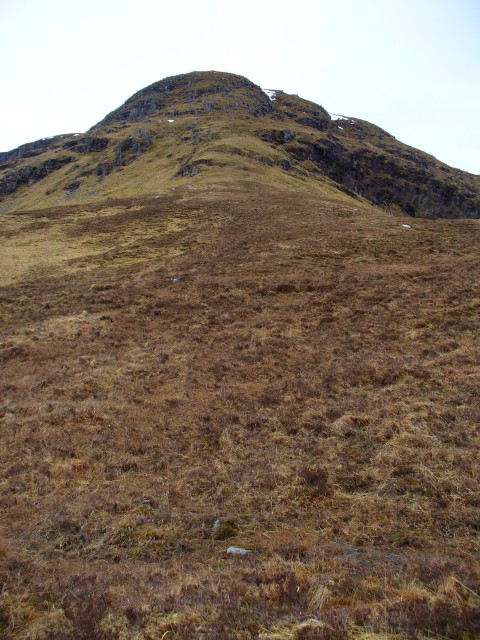 Looking up it seemed like there may have been a bit of scrambling ahead but the path went straight through this section, though it was quite slippy in places. It wasn't long before we reached Leitir Fhearna and were given our only real view of the day and were privileged to see a Golden Eagle soaring overhead. 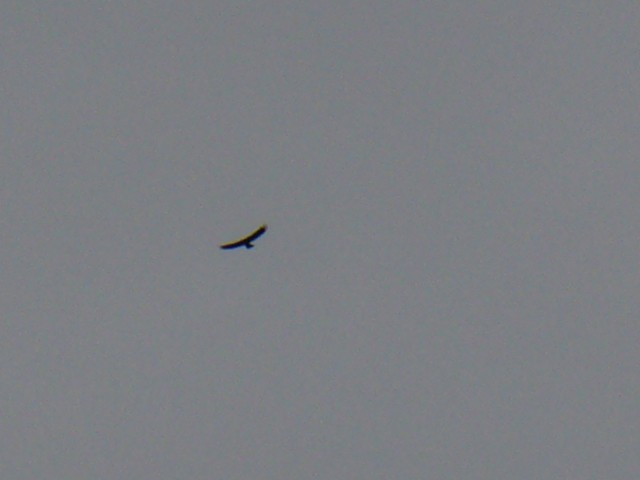 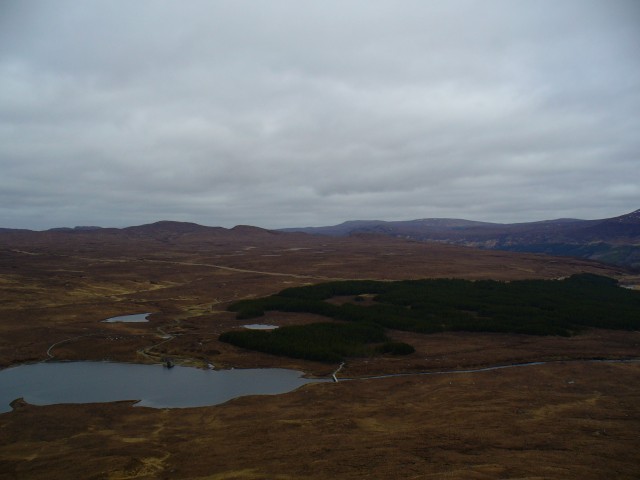 View after only 45 mins

It was at this point that I realised that A' Chailleach isn't actually on the OS map 436. Luckily I had printed the route off this website before we left. We made our way over the plateau in front of us which was covered in deep peat gullies. We decided that we would go for A' Chailleach first and if we had time we would go over to Sgurr Breac. Remembering the walk report on here we decided to follow the track to the right of the ridge which was supposed to lead us to the col between Tomain Coinich and A Chailleach. 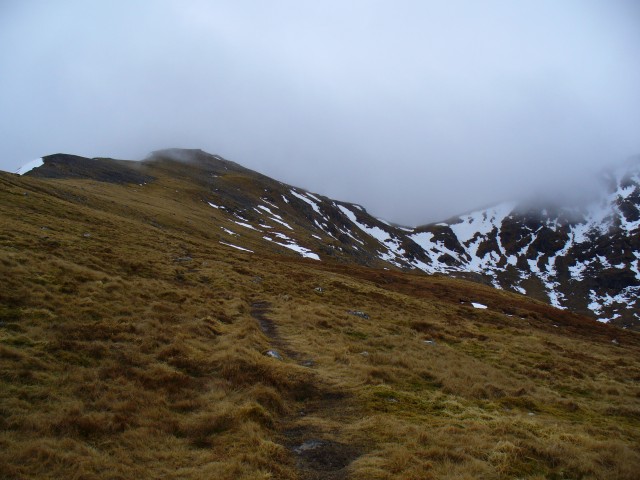 It doesn't.....
The path just seemed to go down toward Loch Toll an Lochain and into a rocky area that the wife was not happy in traversing, especially with snow and ice covering a fair bit of it, so we headed straight up until the ground levelled out a little and then made our way over to the col. We had hit the cloud base by this time so views were non existent, but the wind had died down to almost nothing so was still quite pleasant. It was only about 1pm by this time so we decided we would get both summits done. We should be able to reach A' Chailleach by 2pm and Sgurr Breac by 3pm and back to the car for 5ish...
There path up to A' Chailleach was partly covered in snow and with poor visibility could've been a little daunting for the novice map reader, but we eventually reached the summit just after 2pm. 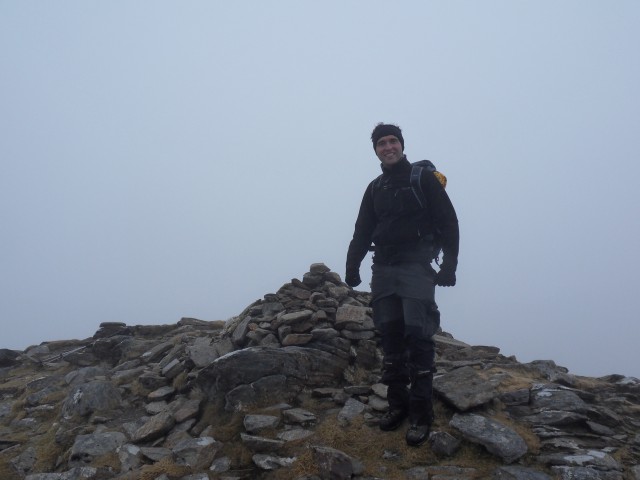 We stopped for a photo and decided to head back to the col for lunch. I imagine there are probably nice views from here on a clear day but we saw nothing but cloud. 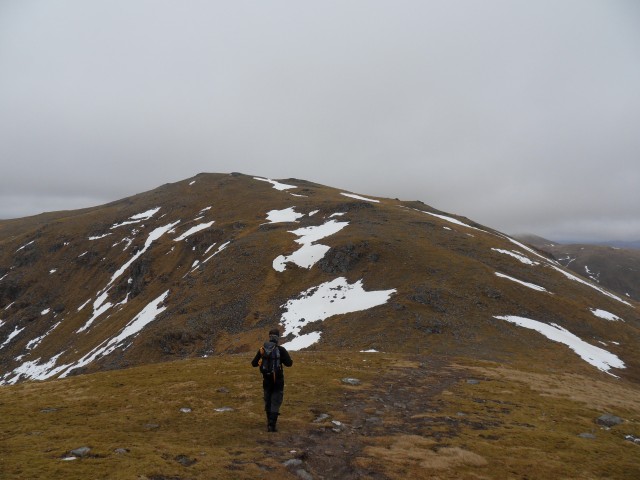 After lunch we made our way over to Tomain Coinich. The path we were on just disappeared so we made our own way round the side of it and soon Sgurr Breac was in sight. We found the path again and headed up to the summit. The cloud base was getting higher by this time but as we reached the summit of Sgurr Breac we still didn't get any views. The summit of Sgurr beac is totally uninspiring and I walked on for another 100m to make sure I was actually at the summit. As visibility was down to 100m or so it was hard to tell whether we at the top or not. There are 2 cairns up there but neither looked like they were there to announce the highest point of this hill.... 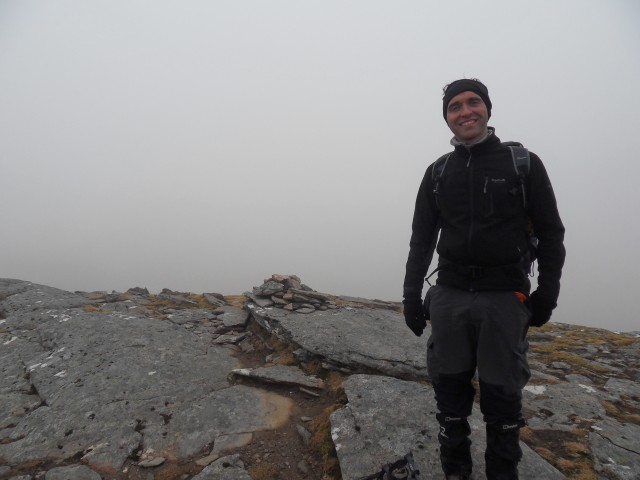 After deciding that we had actually reached the top we decided to head back to the car. We made our way back to the summit of Tomain Coinich where there is a substantial cairn at the summit. At the cairn we turned right and headed back down the ridge to Leitir Fhearna. There was a path that took us back to the top of the climb we had done earlier. We took the same path down which led us all the way to the stalkers path. Looking back up the path we realised how we missed the turn off on the way up as there is no trace of it looking up...!!! 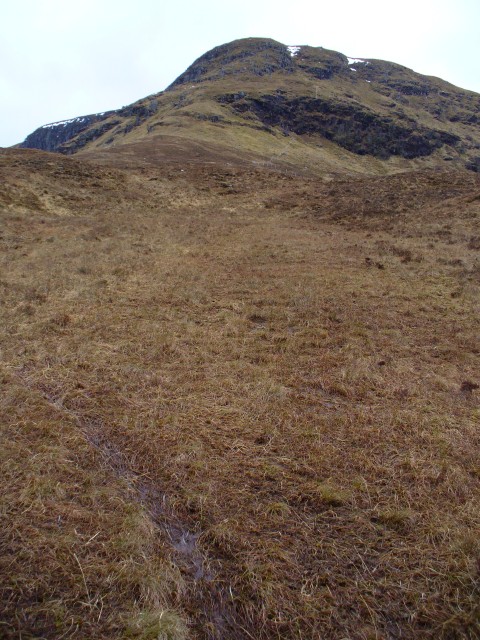 Track on the way up which we missed..!!!

We washed our boots and gaiters off in the loch and eventually got back to the car about 5.45 having enjoyed the day but a feeling a little uninspired and don't think I'll be returning to these hills anytime soon.....

You mentioned track leading to col, it doesn't. Actually it does and through stony area. Looking at photo must have been covered in snow. You can see the track when you look back in that direction when on the col.
Not a pleasant ridge to walk along, and remember from last September when I climbed those 2 that the track could be easily missed near bottom of the 1st ascent after the bridge. Climbed the 3 Munros immediately to east of these 2 in rain and mist and got no views so hope you get a better day for those 3 and fine views to be had.

FestinaLente wrote:You mentioned track leading to col, it doesn't. Actually it does and through stony area. Looking at photo must have been covered in snow.

The track did go into the snow but at that point we were actually lower than the col. And your right there was a stony area ahead of us that the wife was just not comfortable even attempting. We did try looking back when we reached the col but couldn't actually see the track anywhere. I'm sure it's visible when all the snows gone but don't think I'll be going that route again.
Did Sgurr Mor a few weeks ago and that was a much more pleasant walk. Still got 2 more munros to do up there so I will be back....

Thanks for your report. These are still on our list so I have made a mental note - only do these hills on a clear day!

You didn't have a great day weatherwise - when it is clear, you have great views over to An Teallach and the rest of the Fannaichs.
Perhaps it just wasn't a good hillday.