A previous look at Loch Mullardoch was abandoned as the weather and Jaf's back were playing up, but with a decent window opening up, I decided to go for a couple of nights away despite growing pain from frozen shoulders. Although Lawrence couldn't join me for Mullardoch, we planned a meet up the following day, to do a trek into the Alder hills. Between shoulder pains, excitement of a big hike to come and severe desire not to miss the ferry, I didn't sleep well that night, so just got up and on my way at ridiculous o'clock. At least that meant a relaxing 4 hour trip north. I don't know if I would have been so relaxed if I had come across the herd of cattle being walked along Mullardoch glen, if I was tight for time, but as it was I was able to enjoy a blether with the farmer and make some enquiries about the hills and ferry. Who pays the ferryman? I certainly wasn't going to refuse, Angus! 🙂

Despite the good forecast, it was disappointingly dreich as I parked up at the dam, with well over 45 minutes till my ferry. I had pushed on a bit, in the hope that I might be able to join an earlier sailing at 8am. Just as I was getting the boots on I got a cheery wave from a passing wagon, heading onwards. Mmmh, that might be the ferryman, thought I. Better get skates on. Sure enough it was and in typical style, he was already aware of my impending enquiry about taking an extra passenger. The jungle drums work well in the remotest of glens, at any time of day

Yes, room for an extra passenger despite reduction in capacity due to the damned Covid. Heading for the drop-off. Cloud low on An Socach, at the back.

The other 2 passengers were just a bit late, but then we were soon scudding our way down the flat calm loch. I was wondering if there was a passing front, carrying sand from the Sahara our way, till Angus explained it was debris from the loading ramp that was being propelled in my direction. Duh!

In less then 20 mins we were well down the loch and the engine was cut back, allowing us to gently glide into our landing spot toward the far end of Glen Cannich, where another chap was waiting to make the return journey. Come back!! I guess we're walking it, then 🙂

All of a sudden I became aware of the remoteness and isolation of my situation, despite the other pair, who had quickly shot ahead. With the hills being shrouded in low cloud, I was keen to properly get my bearings. There was a bit of path and these guys were doing the same round as me, so I gingerly followed behind, trying to get a grid reference from OS Locate. Unfortunately, the app wasn't working for some reason, so I had to take more time to ensure I was on track. Looking back to drop-off point. Gradually more confident of where I was heading, I overtook the other pair, following occasional bits of track toward the bottom of the ridge coming off An Socach. Had a bit of guesswork here crossing some peat bogs, before turning uphill, into thick cloud. Ridge round to An Socach.

Again, I was aided by odd bits of trail, compass and lots of crossed fingers I was on the right hill. It was already very warm, but it took a long time, till finally the cloud brightened up, as sunlight began to penetrate and then I emerged above the cloud, to the sight of a beautiful inversion. Relief..... and disbelief

Pano round some of ridge.

Before long I was able to see round the ridge to the summit and just about pick out Beinn Fhionnlaidh, Carn Eige and Mam Sodhail. Well, at least I had made my way up the right hill! The route ahead looked spectacular....... and long

Stopped at summit for quite a while taking in the views, usual 101 pics and topping up refreshments. Along the ridge to No.2, An Riabhachan. Back round An Socach. Glen Affric hills at the back. On No.1 and feeling the heat. Little did I realise how hot it was to become! A guy who had taken a later boat trip caught up with me, but after a few words, I moved on, following pretty clear track along the cracking ridge, popping in and out of cloud and the occasional bit of scrambling here and there, as I made my way onto the flatter plateau of An Riabhachan. Even then, it was still a fair hike to the far off summit, but aside from the heat, I was in my element, enjoying the remoteness and stunning views. 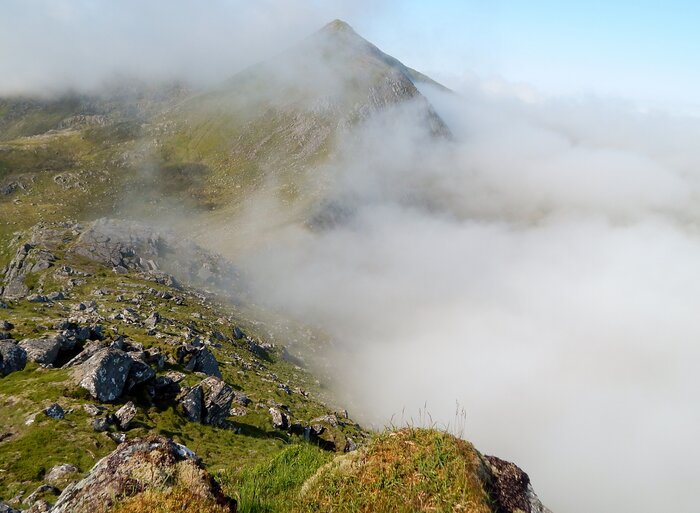 Look back to An Socach. South across the loch to Tom a' Chòinich. Looking down to ferry terminal, on way to An Riabhachan :)

Again, there is some cracking ridge walk to traverse down to the Bealach Toll an Lochan. En route, I could hear animal sounds off to my left, but couldn't see anything, till the mist revealed deer taking a paddle in the lochan's below. By now Sgùrr na Lapaich, was beginning to look like a serious slog, as I descended and it ascended!

The other chap, had caught up with me again and I was pleased to see he was sweating as much as me. How I would love a dip in that lochan, myself Carn nan Gobhar, relatively easy compared to the other 3.

It was hard work making it to the summit, where a young family had arrived from the other direction, carrying a wean, in one of these child carrier thingy's! That must have been seriously hard work. Were they going to carry on round the ridge

Didn't find out, as I took in the views of the cliffs round to Loch Tuill Bhearnach, finished another feed and got on my way, down the steep, awkward, bouldery descent, trying to pick an easy route. Look back up Sgurr na Lapaich.

No.4, Càrn nan Gobhar, didn't look just as intimidating as the others, for which I was quite grateful, as the legs were beginning to tire. Met up with the other chap at the summit, however he seemed intent on making different way down, so soon parted company. I was basically sticking to the WH's route, but he branched off at the bealach, to head for the Allt Mullardoch, where there appears to be fairly new road put into to a hydro-dam scheme. Mmmmhhh, why didn't I think of that? Anyway, progress from the bealach to Mullach na Maoile was quite pleasant and also made for good progress beyond ...... for a while

Then it gradually changes into a steep, roughty, toughty, heather tussocky, mish mash, which I didn't enjoy one bit, other than being able to see the dam and dream of the end being not too far away. Thank goodness I didn't have to ascend this way, or for me the walk might have ended right here! Heading for the none too, pleasant, final descent off, Carn nan Gobhar.

It seemed to take ages, but eventually I stumbled over the footbridge at Mullardoch and back onto the road at the hydro powerhouse. Thank bleep for that! Job done, or so I thought, but not quite so! Even from there the trek up and down wee humps, was draining in this heat and seemed to go on for much longer than it should, before I was finally heading past the dam and back to the car. Look back to Carn nan Gobhar and Sgurr na Lapaich, further beyond. Looking down on Mullardoch dam and the hydro powerhouse. Worst bit of walk awaits.

Oh how I enjoyed that bottle of boiling coca cola, which had been steadily cooking through the day. I cared not one bit, as it was almost guzzled in a oner. Just as I was leaving the other chap arrived back at his car. He seemed surprised that I was there before him. I didn't have the nerve to tell him I had really been running down the hill just to be sure

Ah, well, great day. Next on to Dingwall for the night, then down to Dalwhinnie to tackle Ben Alder, all being well.

Brilliant day you had - these are seriously stunning hills in these conditions, great photos, brought back lots of fond memories. We managed similar conditions here a few years ago, but in May we had the joys of added snow

Nice one - brought back a lot of wonderful memories, albeit I walked the round anti-clockwise, starting at Carn nan Gobhar.

I also had the most wonderful cloud inversion - it really does put the icing on the cake.

Huff_n_Puff wrote:Brilliant day you had - these are seriously stunning hills in these conditions, great photos, brought back lots of fond memories. We managed similar conditions here a few years ago, but in May we had the joys of added snow

Thank you, H&P. Yes, I was lucky with weather. Wouldn't want to be going round there on a poor day, but some snow would only add to the beauty of the place.

Alteknacker wrote:Nice one - brought back a lot of wonderful memories, albeit I walked the round anti-clockwise, starting at Carn nan Gobhar.

I also had the most wonderful cloud inversion - it really does put the icing on the cake.

Thanks, Altenacker, well done. That must have been a tough ascent to the first one. I really did not enjoy the last stretch down to the road. Maybe I'll try it that way next time....... nah

That was a warm day, I was definitely sweating! It was fine having someone to walk with. Stuart

Stuart84 wrote:That was a warm day, I was definitely sweating! It was fine having someone to walk with. Stuart

So, you were "the other chap?" Sorry, couldn't remember your name, Stuart. I've had a few hot days on the hills and that is up there with the hottest. It was hard just trying to hang onto your coat tails

Aye, enjoyed a bit of company along the way. Nice to meet you and enjoy your walking. Maybe bump into you again, someday when your older and going at a more leisurely pace

Great looking day, nicely described and some great photos. Being dropped off somewhere in the middle of nowhere definitely makes you pause for thought for a moment.

Mal Grey wrote:Great looking day, nicely described and some great photos. Being dropped off somewhere in the middle of nowhere definitely makes you pause for thought for a moment.

Thank you, Mal Grey. You are right! I felt very lonely for a while, even though there were two chaps left the boat at same time. It was a bit worrying when they moved ahead, but in truth, the feeling of isolation and remoteness added to the excitement of the day, especially navigating in the cloud for some time. The Mullardoch trip is something special, getting dropped off at the far end.