Corbetts included on this walk: An Sìdhean

Sub 2000' hills included on this walk: Meall Innis an Loichel


A Monday in September with good weather - I decided it was a good time to return to do the corbett at the far end of Glen Strathfarrar, An Sidhean. Got there a few minutes before 9am, only car waiting until one more arrived just as the gatekeeper came out to let me through (in both directions she was perfectly pleasant, it's only the second time I've been through by car and neither time had any issues). About a 14 mile drive down the glen to get to the Monar Dam and parked up. For the first 30 seconds or so all was fine ...then word got out to the midges that a new victim was in town. Cue me trying to drink coffee and eat a sandwich with a midge net on. Just before reaching the dam, there were a couple of areas for cars to park Set off towards Monar Lodge on the continuation of the track, passing an estate worker repairing a gate who was similarly adorned to me (legs and arms covered, midge headnet over a hat). Followed the WH description so won't repeat in any detail here. Really seemed to be lacking energy though despite plenty sleep and food ...a sign my anaemia is rearing its head I think, so made a mental note to increase my iron tablets again for the next few days. Enough energy to continue on though, just not with an enthusiastic spring in my step, and any thoughts I'd had of adding the nearby graham of Beinn na Muice onto the day were already being shelved. The midge net eventually came off as I walked along the stalkers path, a slight breeze and beautiful views down and across Loch Monar. An Sidhean not in sight yet, it's set back on the right Burns were all crossed on footbridges Good stalkers path to follow, this the longer, flat-ish section of walk with lovely views down Loch Monar

Eventually turned right to go uphill on another stalkers path, a short distance up that I took this pano shot - Mullardoch munros on the left, Strathcarron munros on the right Eventually I took the path going off uphill on the right and then left it when it faded out, heading north straight up the hill in front. I knew the summit wasn't at this end, but it was a bit of a disappointment to get to the top of that initial climb and see the wide, bumpy, 'plateau' stretching ahead so far with the actual summit of An Sidhean still not in sight. Thankfully although it was a longer walk to the summit than I felt like doing that day, at least it was a lovely clear day and I could see from the map I just had to head north in as straight a line as the bumpy, rocky, boggy terrain would let me. ...and onwards and upwards to An Sidhean. It was shortly after this that the stalkers path faded out and I just continued north up the slopes ahead. Got to the 'top' of the climb only to be faced with this ...no sign of the summit yet, I had a few bumps to go over or around first. Glad I wasn't in cloud. 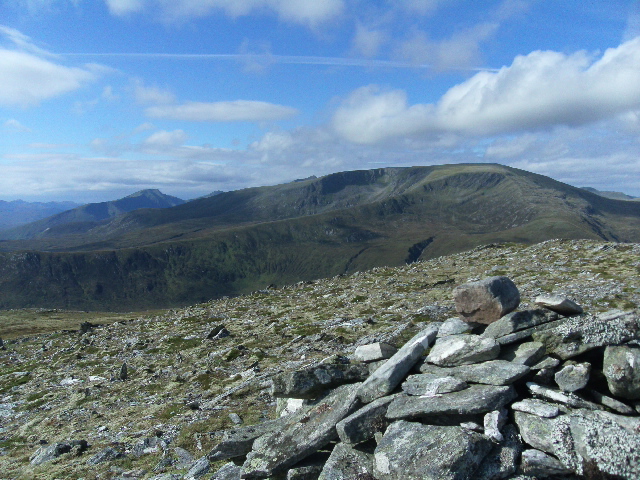 Summit cairn at last - I barely gave this hill a glance when I was over there on Maoile Lunndaidh a few days ago, not realising I'd be doing this one so soon after

Got to the summit cairn and enjoyed the views; Maoile Lunndaidh next door looked stunning, though when I was up it 2 weeks ago, I don't recall even noticing An Sidhean then! The Strathfarrar munros lie to the east Headed back the same way to the car, but as I was just getting back to the dam, I had this view of Meall Innis an Loichel. Decided it was an easy enough addition to the day, being so close.

I'd planned to do the circular route, but feeling a bit lethargic and knowing the way I'd come was tiring enough, I returned the same way. Of course with it being descent and then the nice flat-ish walk out, I actually felt okay when I arrived back at the car. Not okay enough to do Beinn na Muice as well - and having seen it, it warrants a traverse on its own rather than an up-down as a tag on to today's hill - but energetic enough to do the small hill of Meall Innis an Lochiel (a marilyn/sub-2000) immediately over the dam. My out and back route for An Sidhean: View from the dam while walking across - there's a tiny blob of red (my car) in the centre showing where the parking area is, below Beinn na Muice

So after finishing the flask of coffee without the company of the morning's midge army, I walked across the dam, continued a short distance along the road/track and then headed up the grassy slope to the summit. It was steep, but short enough for me to be at the 391m summit cairn within half an hour. Got the map out for a couple of minutes to look at possible ways up a couple of other hills I was getting good views of (a bigger marilyn, Beinn Dubh an Iaruinn, just across the track which looked like I could go up from this east side of it, plus the towering munro of Sgurr na Lapaich,usually done as the 4 Mullardoch munros but which looks accessible from its N/NE side with the view I had from Meall Innis an Lochiel...). With hindsight, I should have explored a bit further the start points for these hills as I had time, but I ended up just going back to the car and heading home after getting these couple of new hills done. The view down Glen Strathfarrar from Meall Innis an Loichel I'll need to check my shifts now, I fancy heading back to do Beinn na Muice soon having seen it now

I've only just seen this report but by coincidence I did the exact same two hills today. I didn't get such good weather though; it was breezy, the cloud base was at about 800-850m so none of the large surrounding hills were out, and there was a 30 minute squally spell of rain coming off the top. The only route difference was that for the sub-2000 Marilyn I drove over the dam and went up and down from the high point of the road between the dams.

I got to the gate at 9.15 and I was told I was the fourth car to be let through.

Very keen to get to these hills before too much longer and this report gives a great impression of what awaits.