Conic Hill, and a stairway through the clouds.

Conic Hill, and a stairway through the clouds.

Conic Hill route.gpx Open full screen  NB: Walkhighlands is not responsible for the accuracy of gpx files in users posts
Conic Hill, a small hill and seemingly of no consequence whatsoever, but nevertheless it is one of those hills – like Cat Bells and Latrigg in the Lake District – that seems to draw large numbers of walkers to its modest heights, no doubt for its famed views of Loch Lomond’s south islands, views that we were not privy to on this occasion due to awakening to another day of fog and low cloud that only cleared once we had left its busy heights behind.

Conic Hill seems to be a long ridge of ever heightening humps and bumps the third one Tom nan Oisgean being the first one to indicate its height at 187 metres, the fourth at 257 metres then another bump with what appears to be the most popular and titled with its name, Conic Hill, although not the highest at 358 metres this honour going to the most northerly of the humps at 361 metres a mere 3 higher than its best used partner just one small hump further to the south.

We turned up at the large and fairly quiet Balmaha Car Park with its Visitor Centre and rows of Portaloo’s and proceeded to don up for the walk that would see us following the WHW clockwise back to the start. We started the walk by going north towards the back corner of the car park and entering the beautiful Balmaha Plantation with its splendid and mature variety of trees and bushes walking first along a well made track through the trees with them seemingly holding back the misty atmosphere with their overhanging branches. 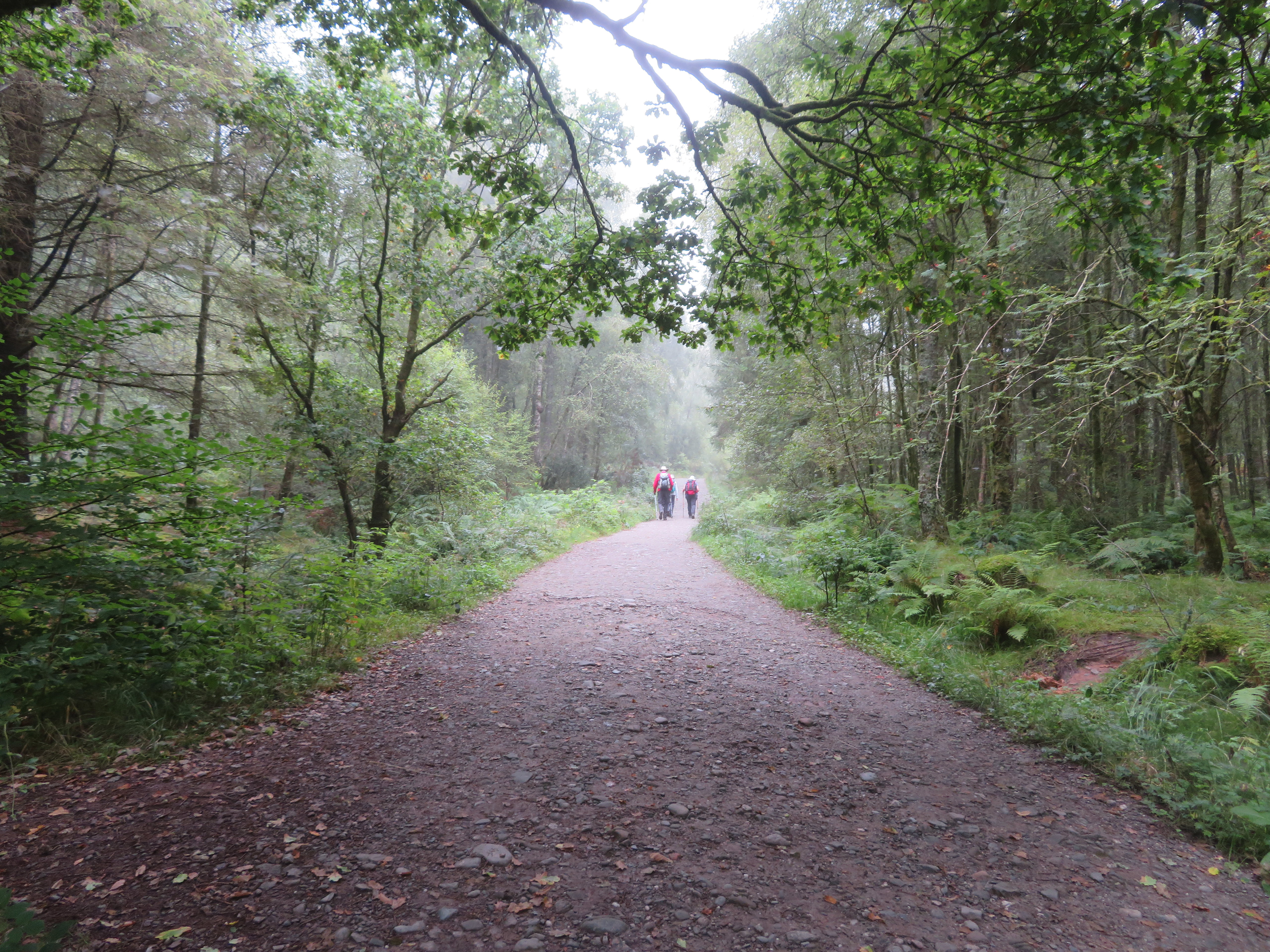 A foggy day but easy walking

Due to the fog there was nothing to see on the way up so the commentary will be sparse you may be pleased to hear.

A few metres into the woodland and we came into an area of everything shrouded in cobwebs showing up beautifully as they held the moisture from the fog. Very worthy of a part in any Harry Potter film and Hogwarts. They were everywhere, even up in the higher branches of the trees. 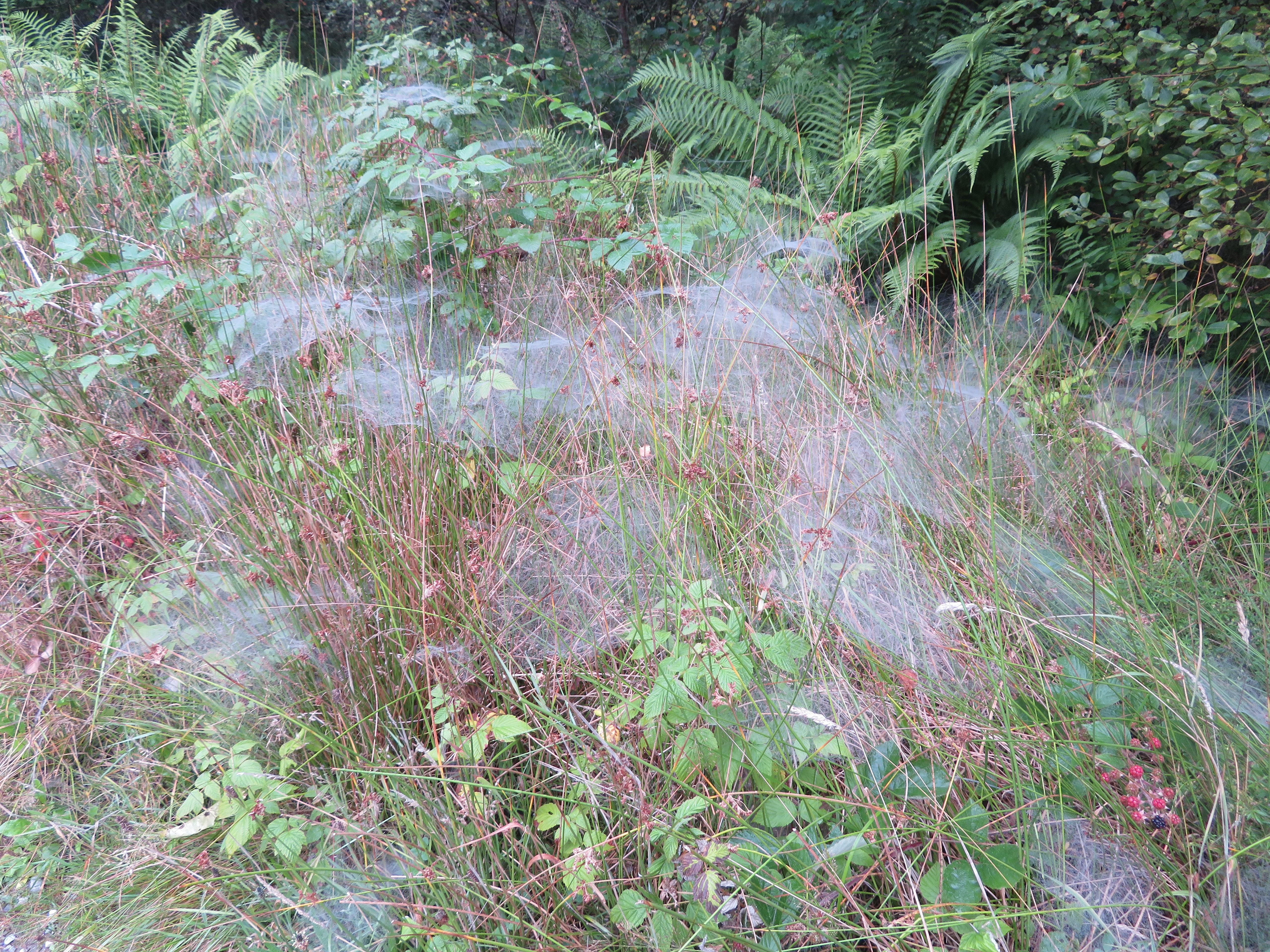 A gossamer net of spiders webs in Balmaha Plantation 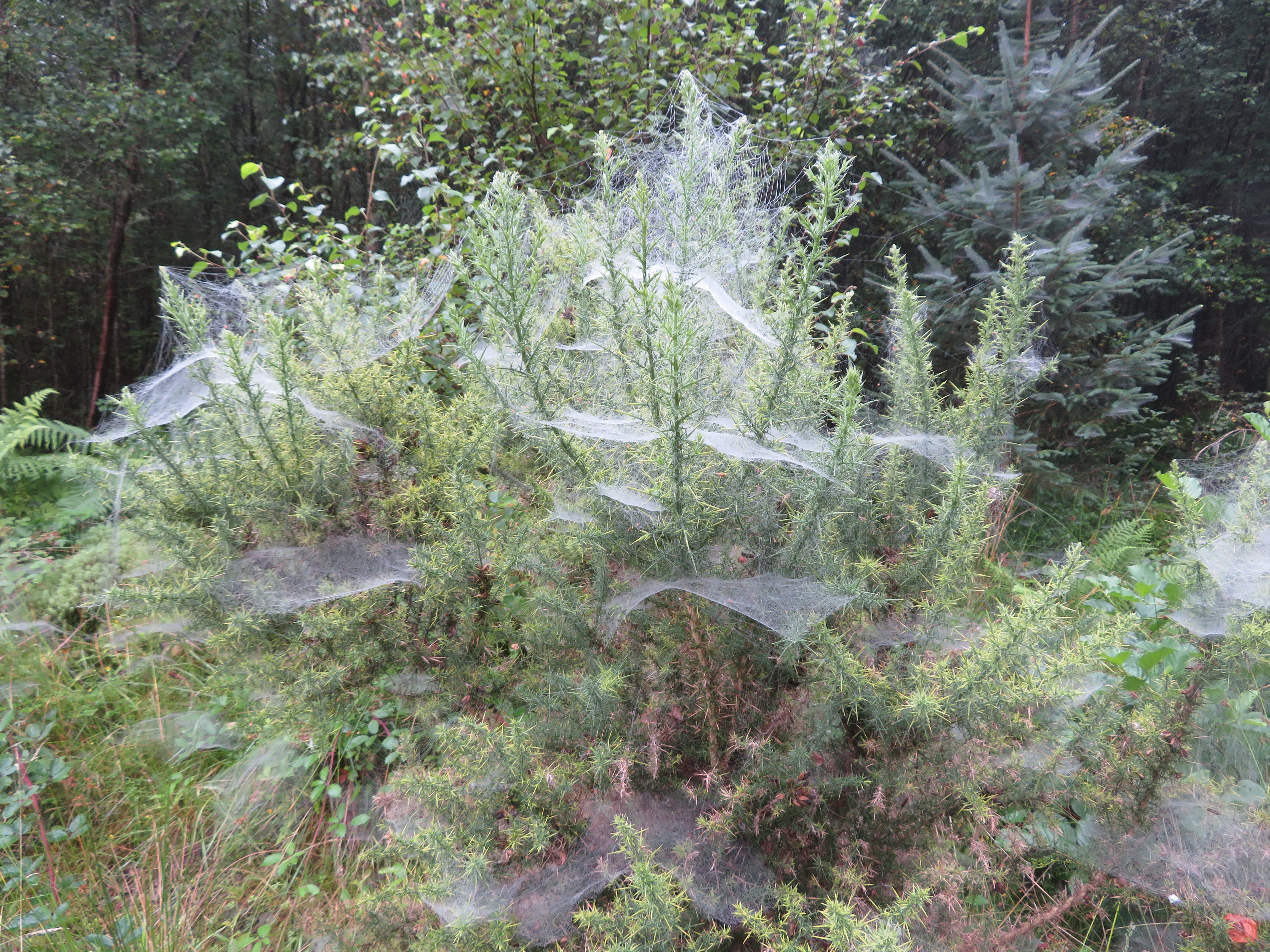 Leaving the webs behind we now came to a group of mature pines with their needles giving a lovely russet colour to the ground where ever there were no ferns, mosses or lichens growing. 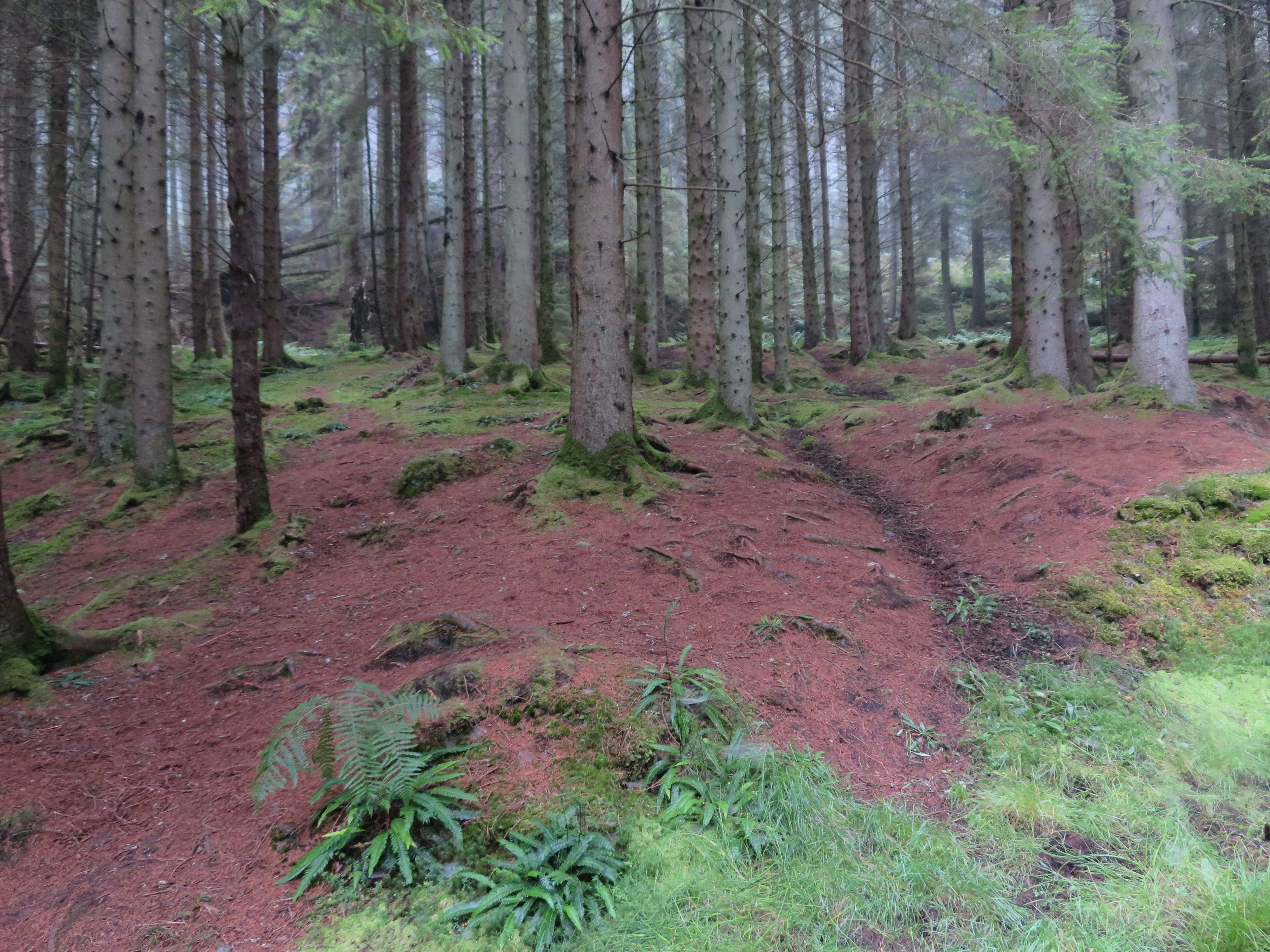 A carpet of pine needles

A few minutes later and we came across the first of the many sections of steps to aid us on our way. 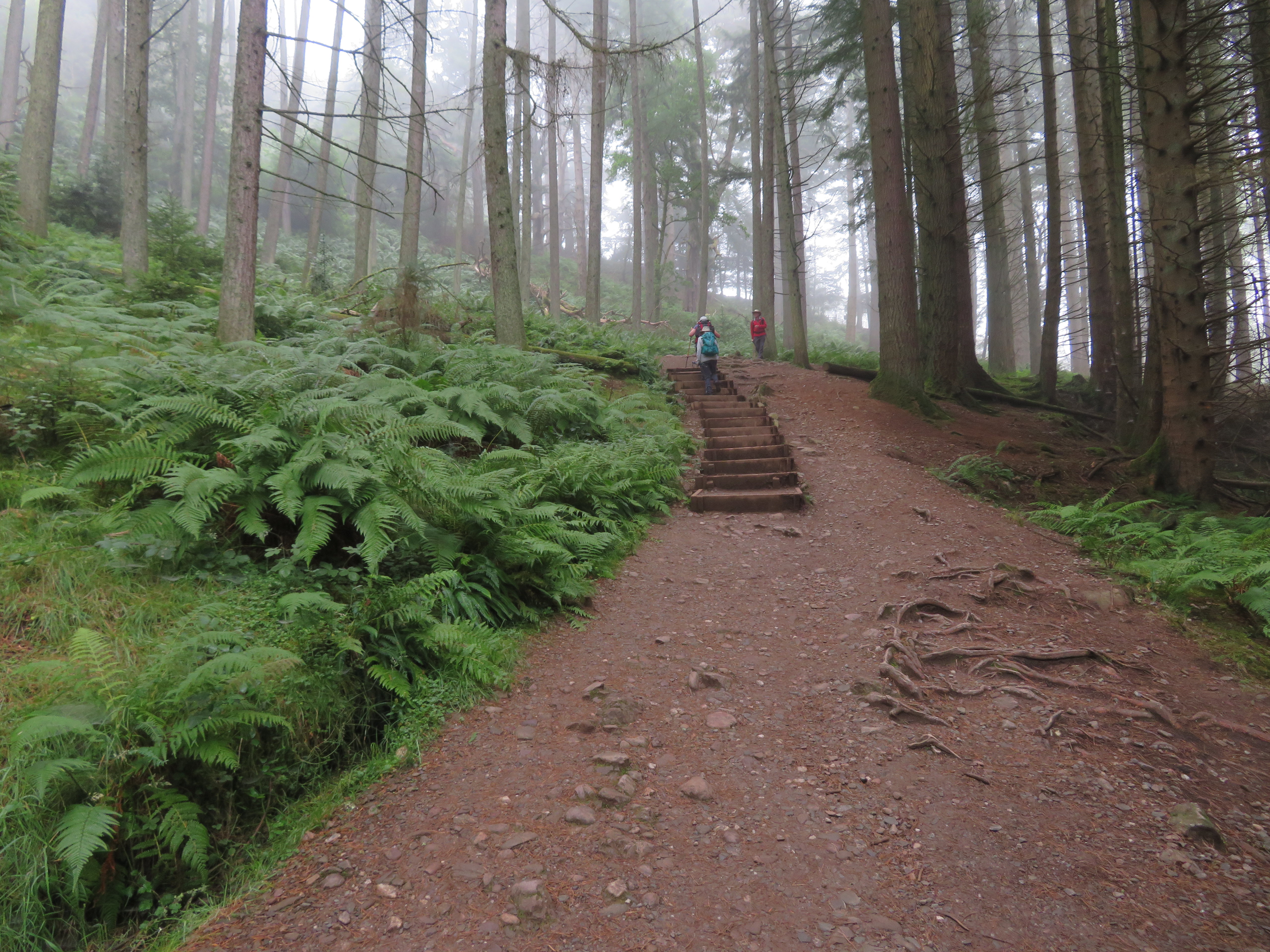 And now for the steps - plenty of them

There are a great many of these steps on the way up and they are things that I don’t particularly like as they intrude upon a steady walking gait and upset the rhythm, and yes, I do realise that they are sometimes a necessary feature for path preservation but I personally find them tiring things to negotiate.

With nothing to see but trees – albeit lovely trees – and fog we were soon leaving the forest behind as we approached the foot of Tom nan Oisgean and a lot narrower path... 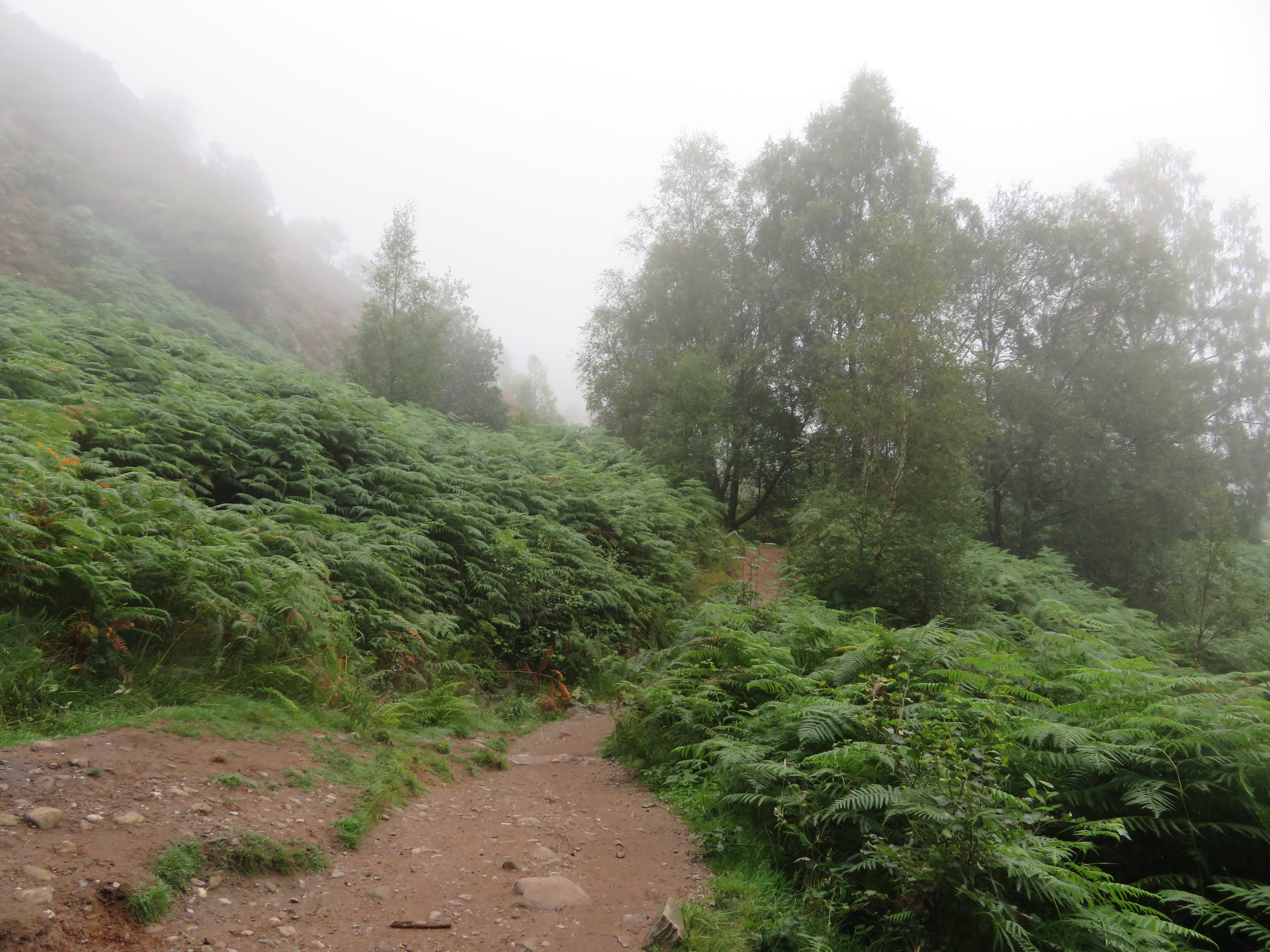 Leaving the forest at the base of Tom nan Oisgean 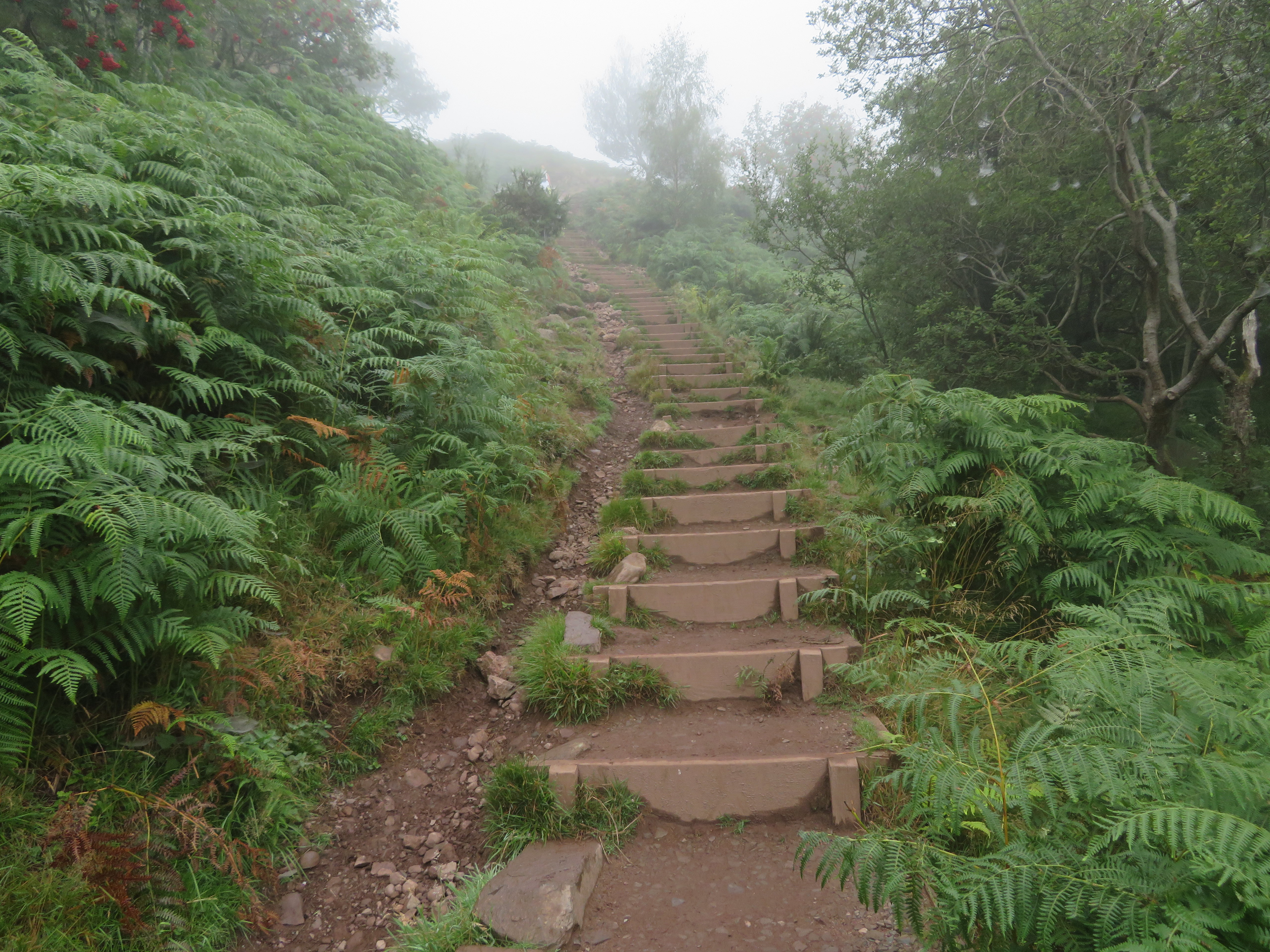 And there's more to come

even through Bealach Ard. 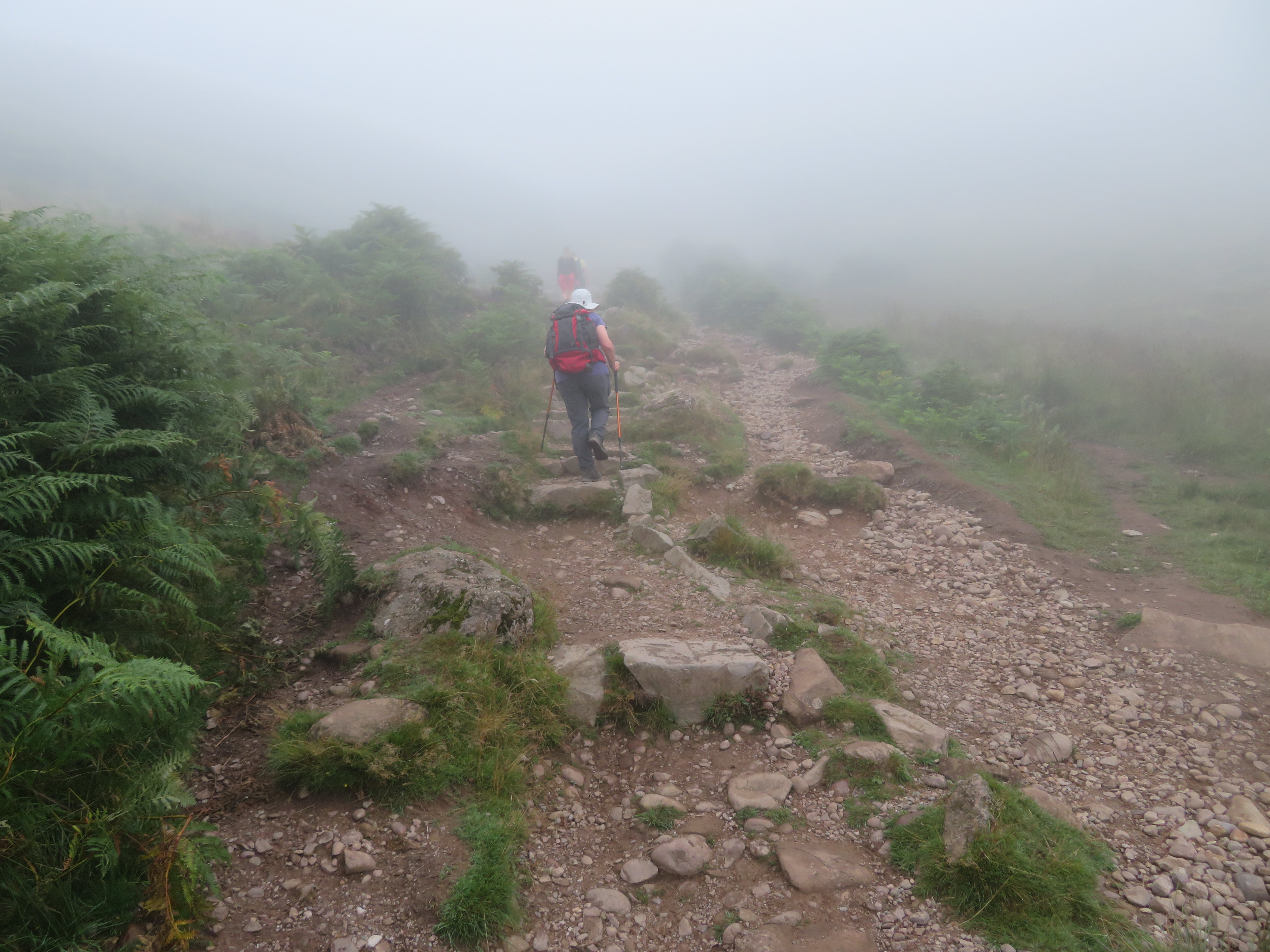 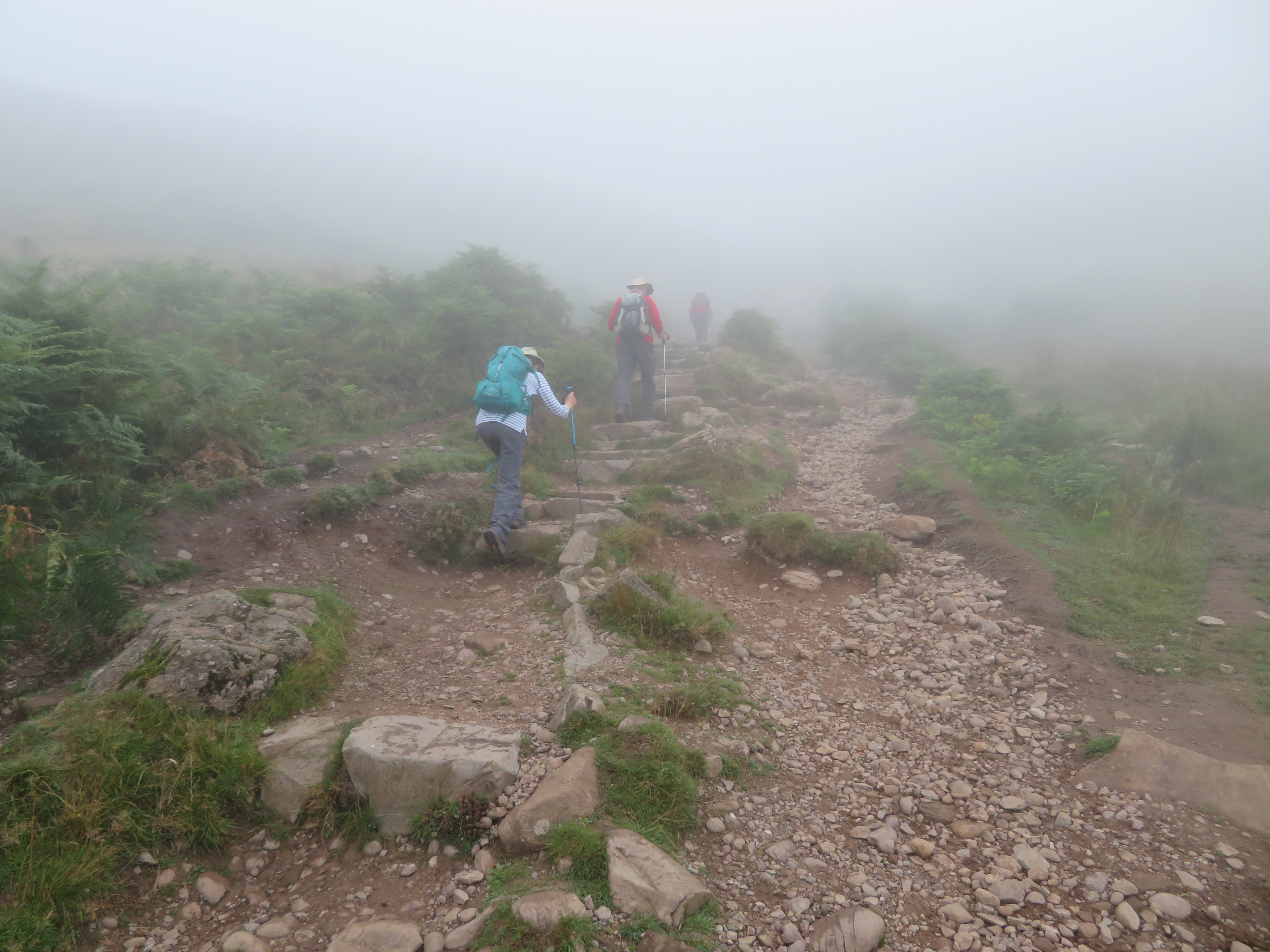 Stairway into the fog

Walking in fog seems to deaden sound, taking the passage of time away and forming nothing but a featureless and grey environment. There were quite a few early starters on their way back down with us either passing or being passed by others on their way up. Just before the final climb to the summit we decided to have a bite to eat at the start of the narrow path up and across the rocky face of Conic Hill. 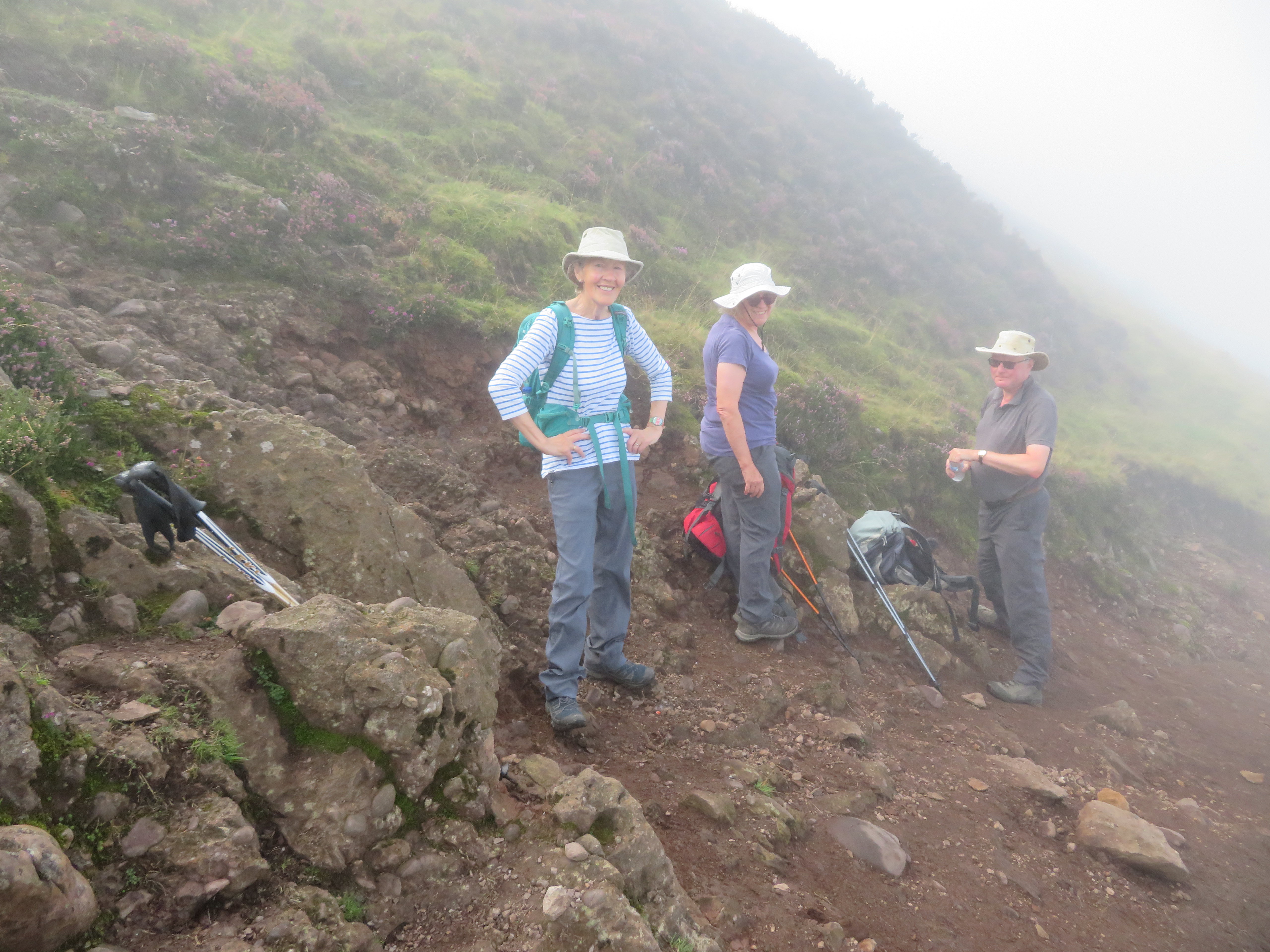 A short break before the final climb to the summit

Whilst we were sitting about a chap on a mountain bike arrived, literally threw his bike to one side and staggered on wobbly legs past us on his way to the top. We had chats with a variety of walkers, some serious and others just out to do it and didn’t look as though they had another step in ‘em. I admire people who ‘give it a go’ I really do as they fight on ever upwards with great determination.

We set off after a good few minutes of chatting taking the narrow path into the depths of the fog working our way through the rocky ground to soon find ourselves stood on the top, us and a few thousand flying ants. The top is a dome of well trodden rock and we were just barely above the cloud with nothing to see but a beautiful blue sky and a distant mountain skyline just visible through the fog to the northwest. 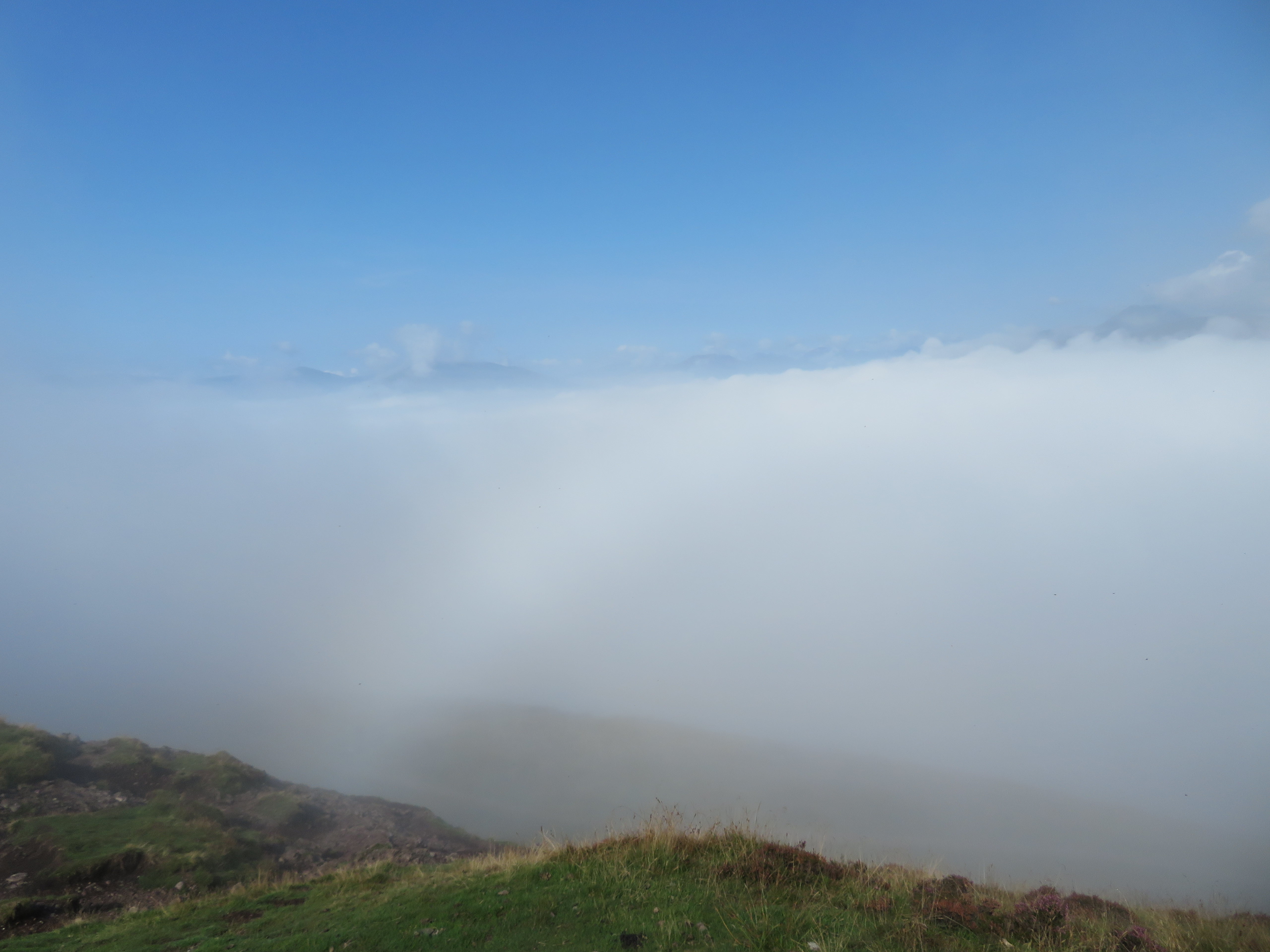 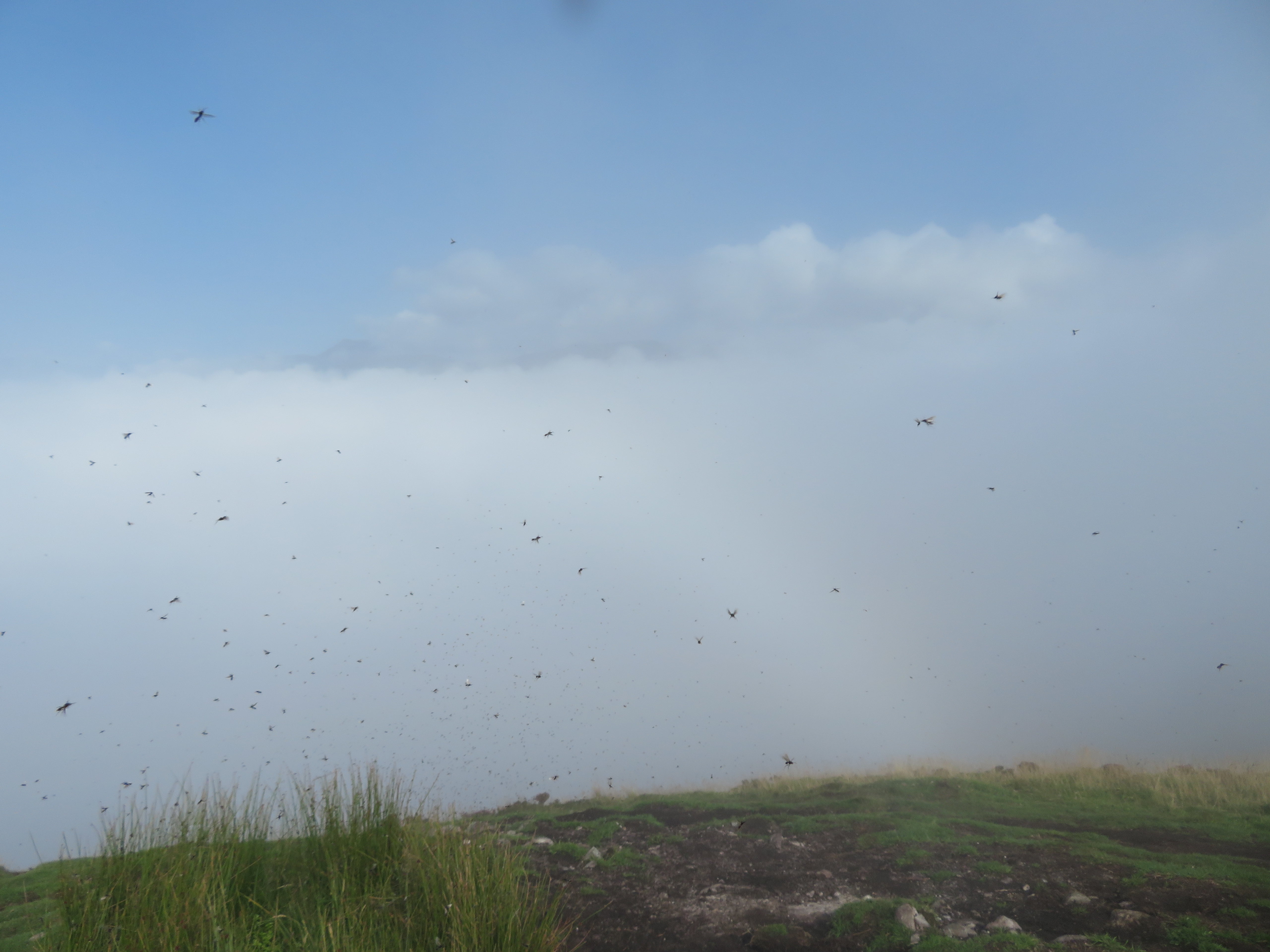 From this 358 metre top we could look down on the other few humps over to the south of us adorned by a few people having a look at the fog. 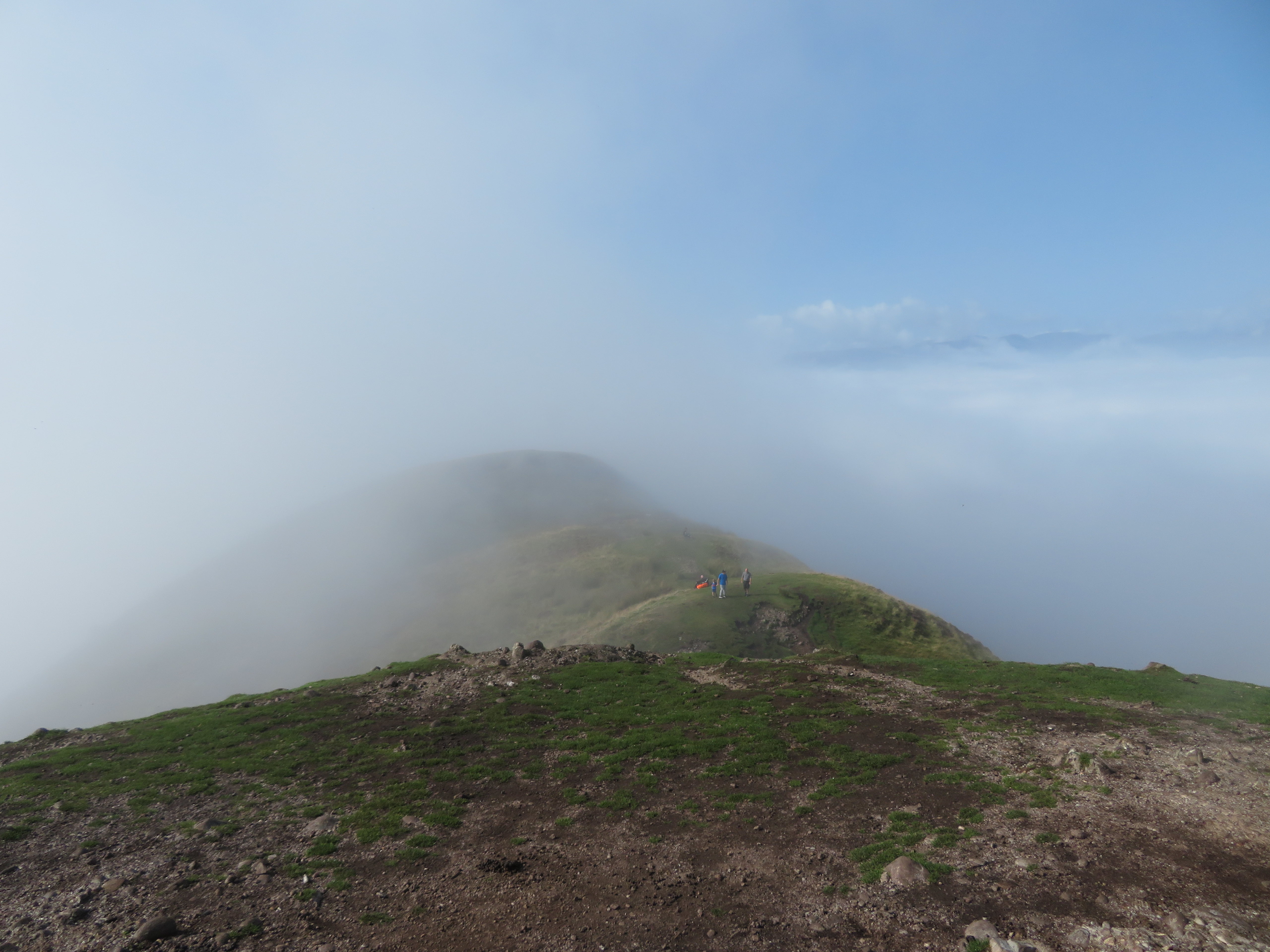 Leaving Conic to the ants we took a faint path leading northeast that took us over a small hillock and then onto the highest top of the group that unlike its lower neighbour is covered in grass and rushes also adorned with two small cairns. I wonder what makes this higher top less of a favourite than the baldy one. Maybe the views that we couldn’t see are better from that one. 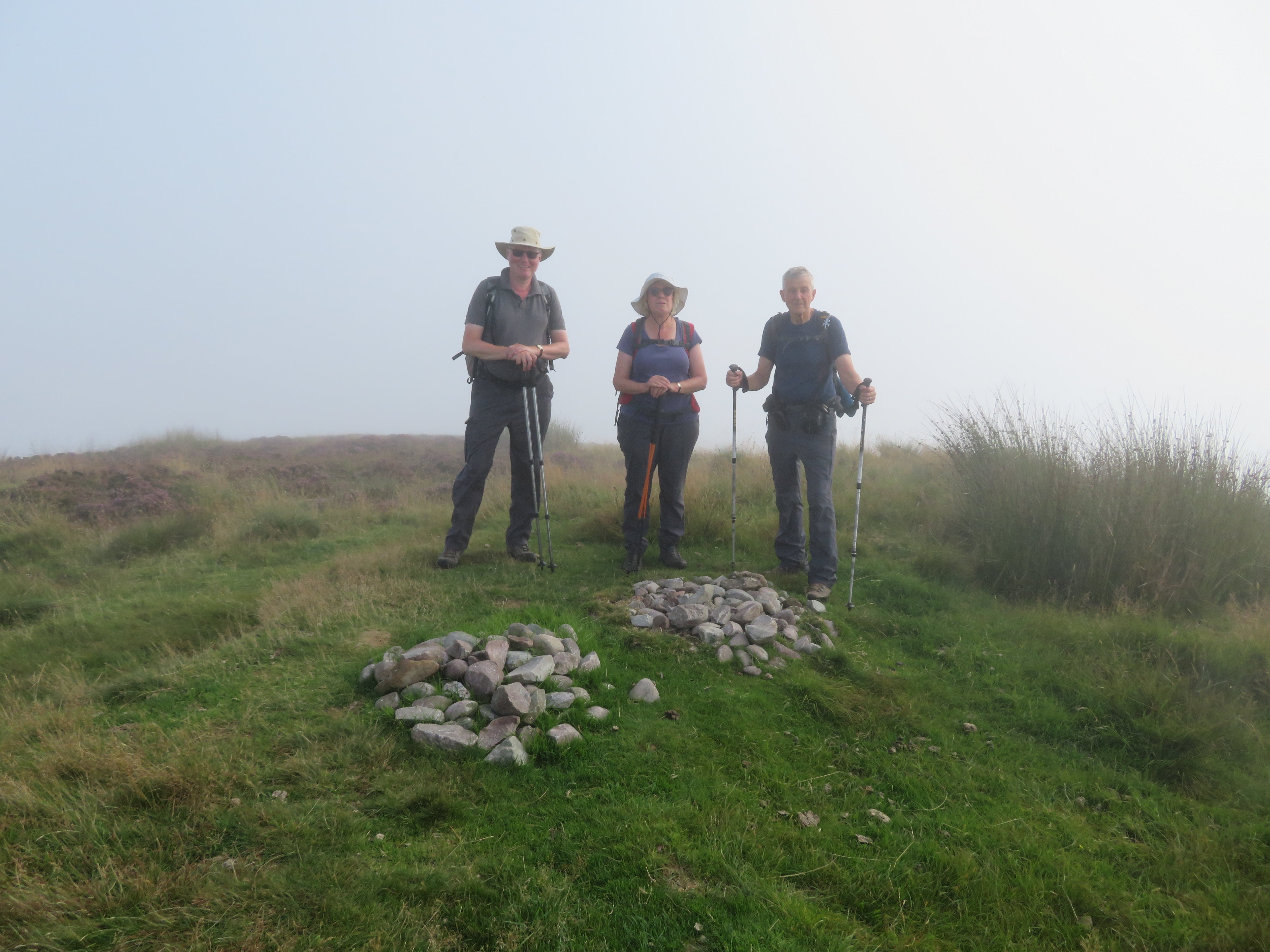 Leaving this one behind we found a thin path down to the WHW on which we walked east for quite some distance before turning south to enter Garad Ban Wood. The WHW is well made up with a good solid path easily followed as we walked it with the course of Burn of Mar running along its tree lined way below us. 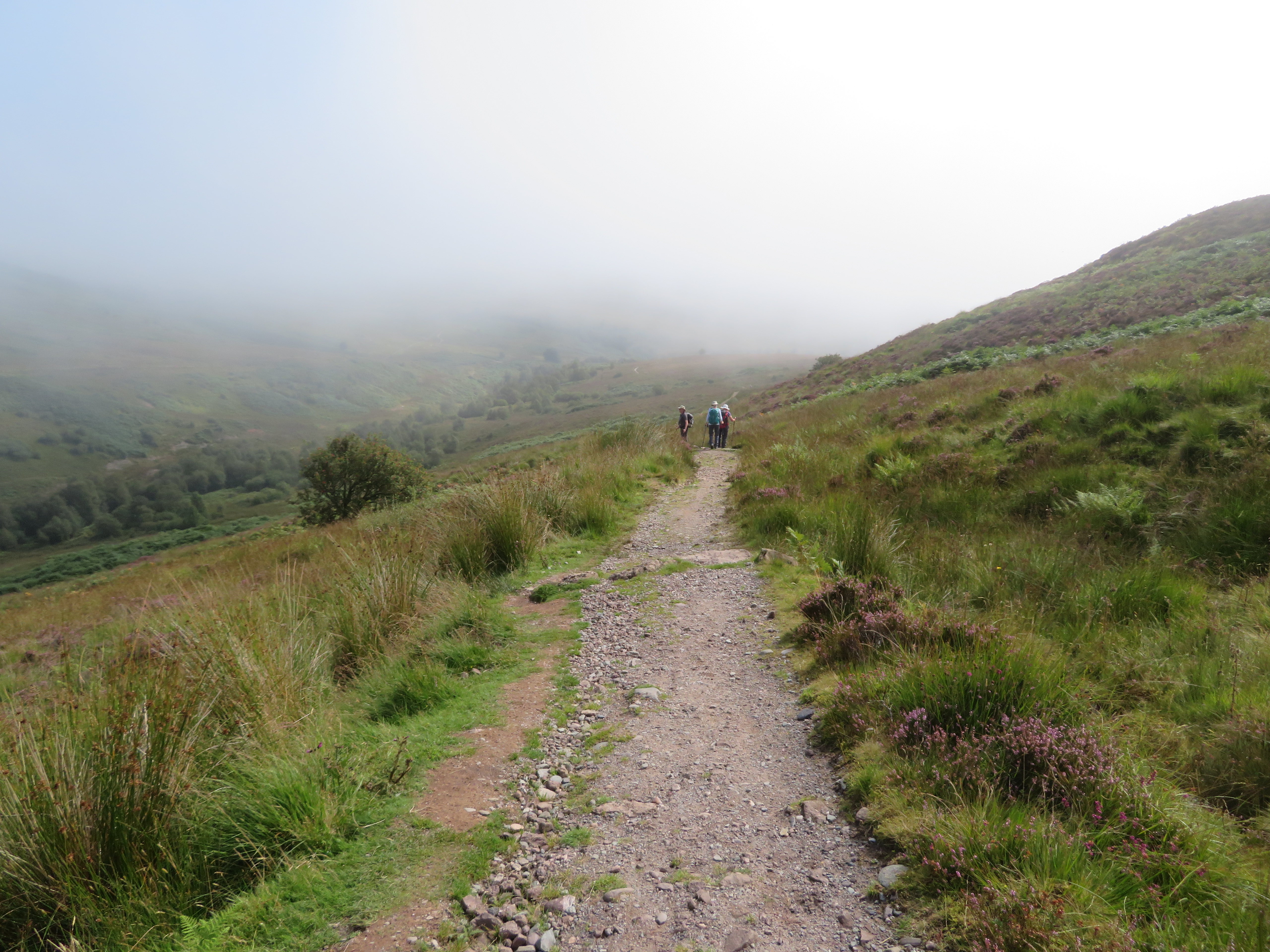 The tree lined Burn of Mar to the left

The cloud appeared to be slowly lifting over to the north but was still in abundance behind us. 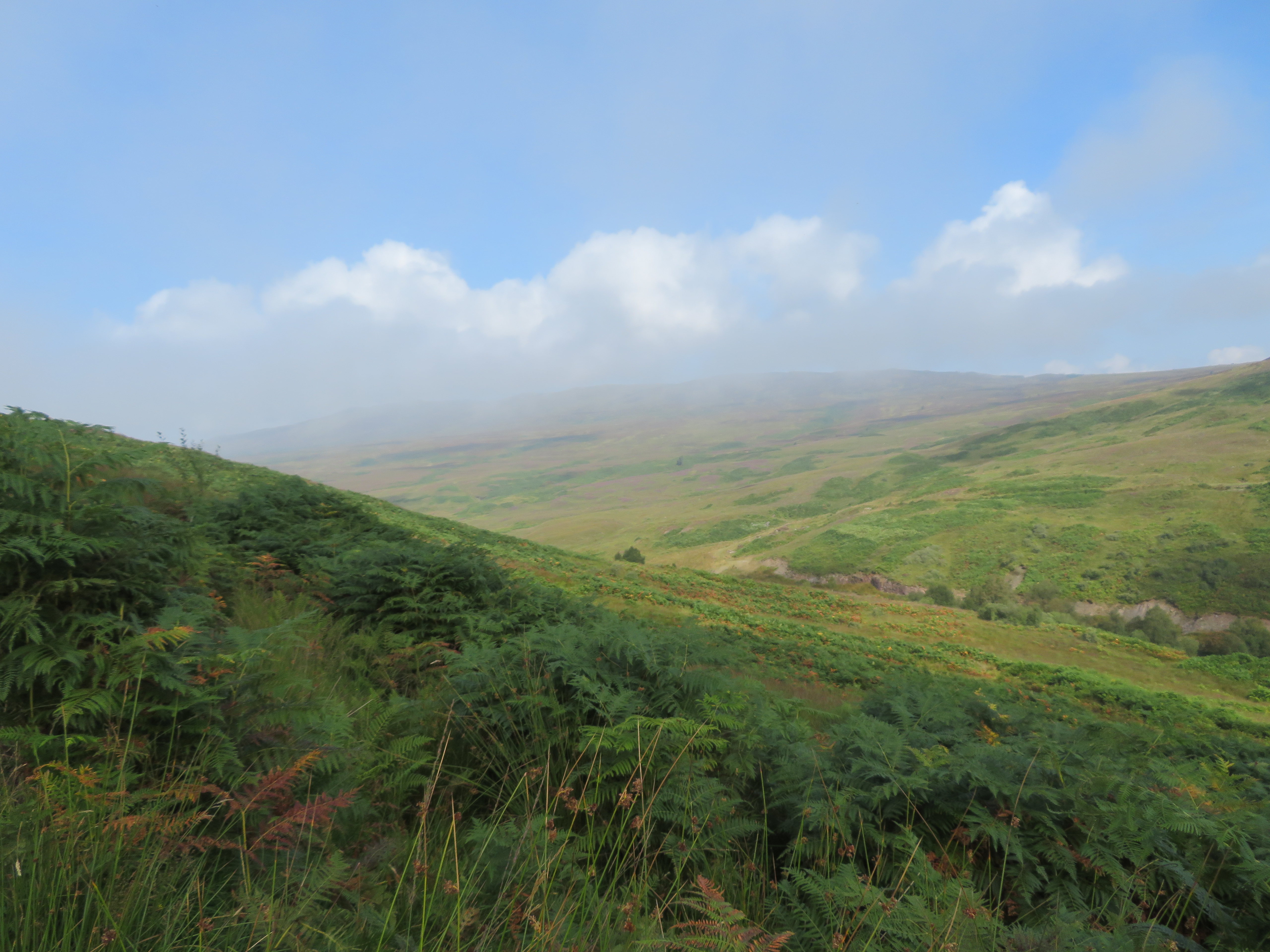 A cloud topped Tom a' Mhorair 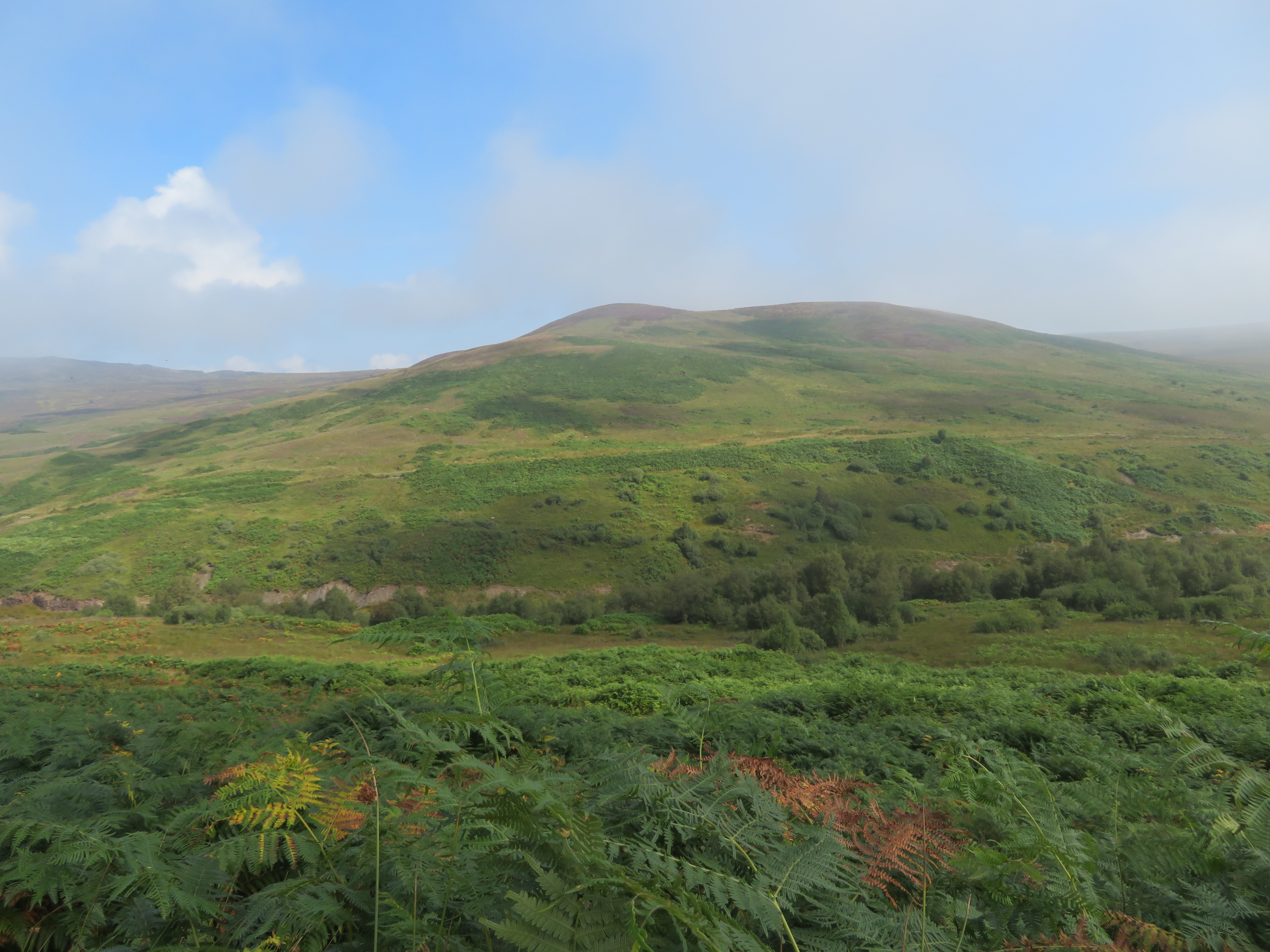 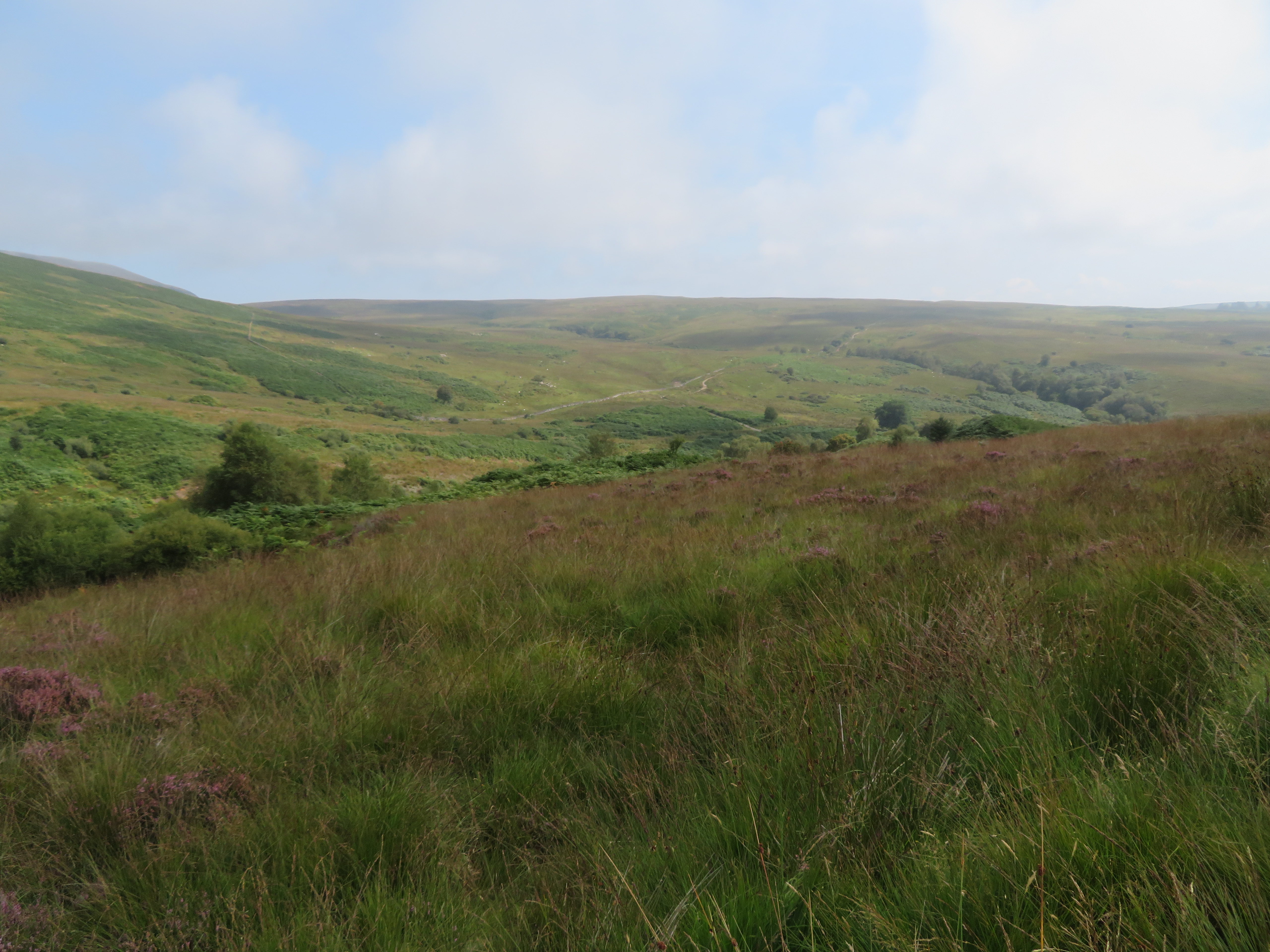 A view to the east from the WHW

We met many walkers ascending the path with us being the only ones going down and a look back now showed Conic Hill revealing itself slowly but surely. 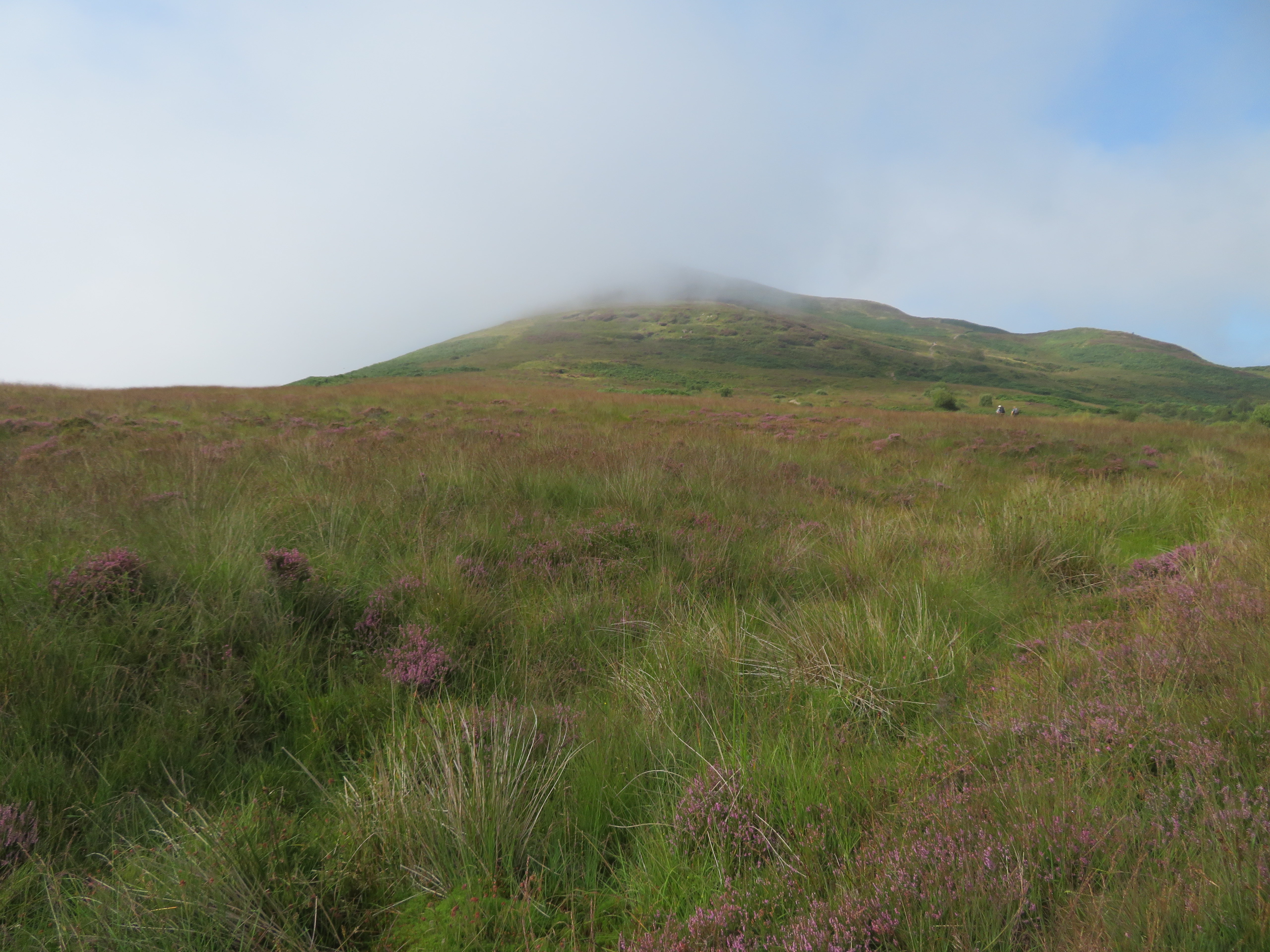 A look back towards Conic Hill

It was a lovely warm, sunny day down here, peaceful with the signs of autumn slowly beginning to show on the trees and flowers. 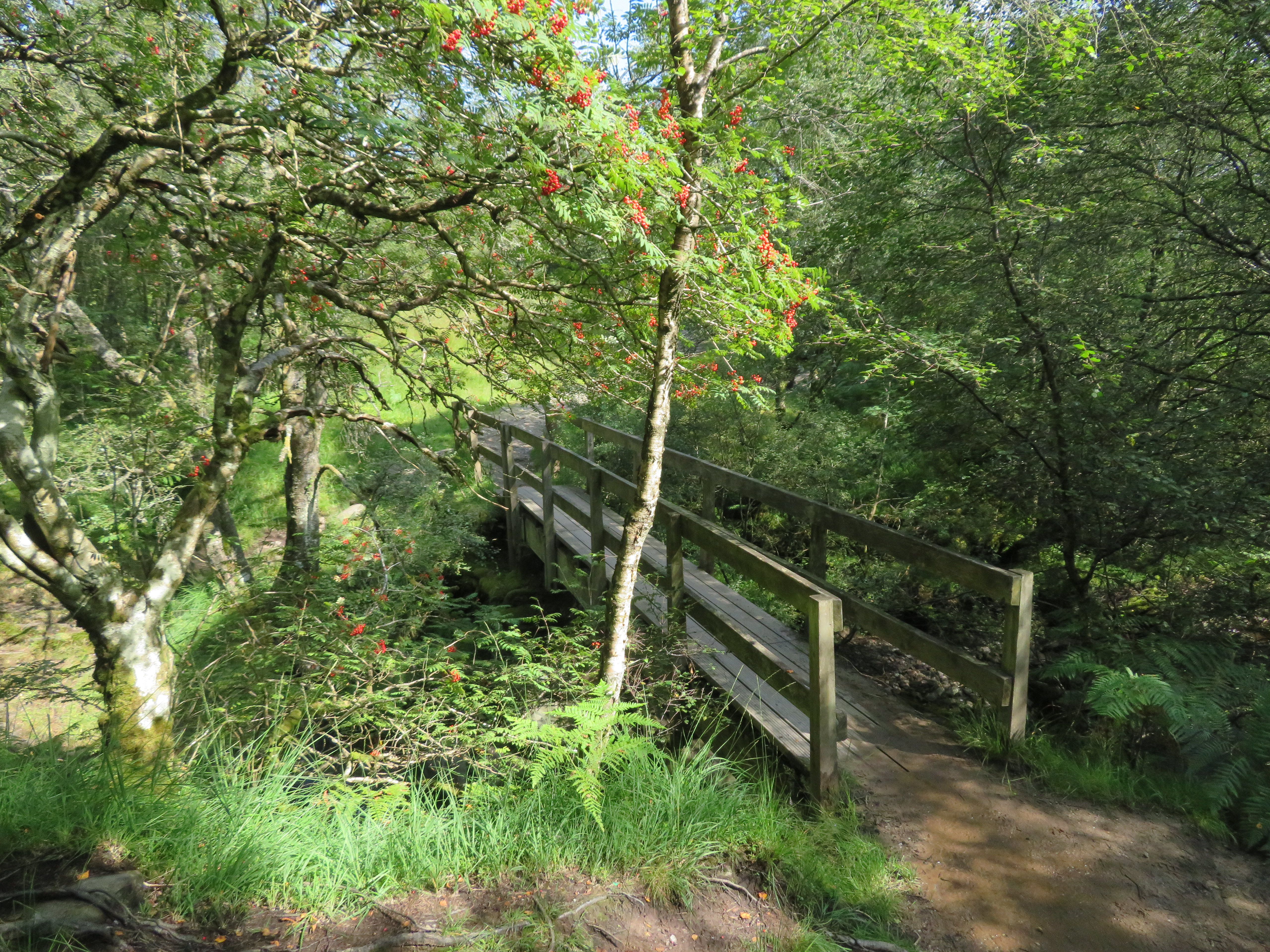 We arrived at the footbridge over the Burn of Mar and before crossing it a turn to the right led us into a small wooded glade just a short distance from the path where we would have a drink and bite to eat. It was a lovely place to stop for a break with the burn warbling past us and the sunshine filtering through the trees branches.

Once again setting off we continued east crossing Kilandan Burn just before we started to turn to the south into the woodland. Someone had decorated a tree with a tag saying ‘You are not alone’... 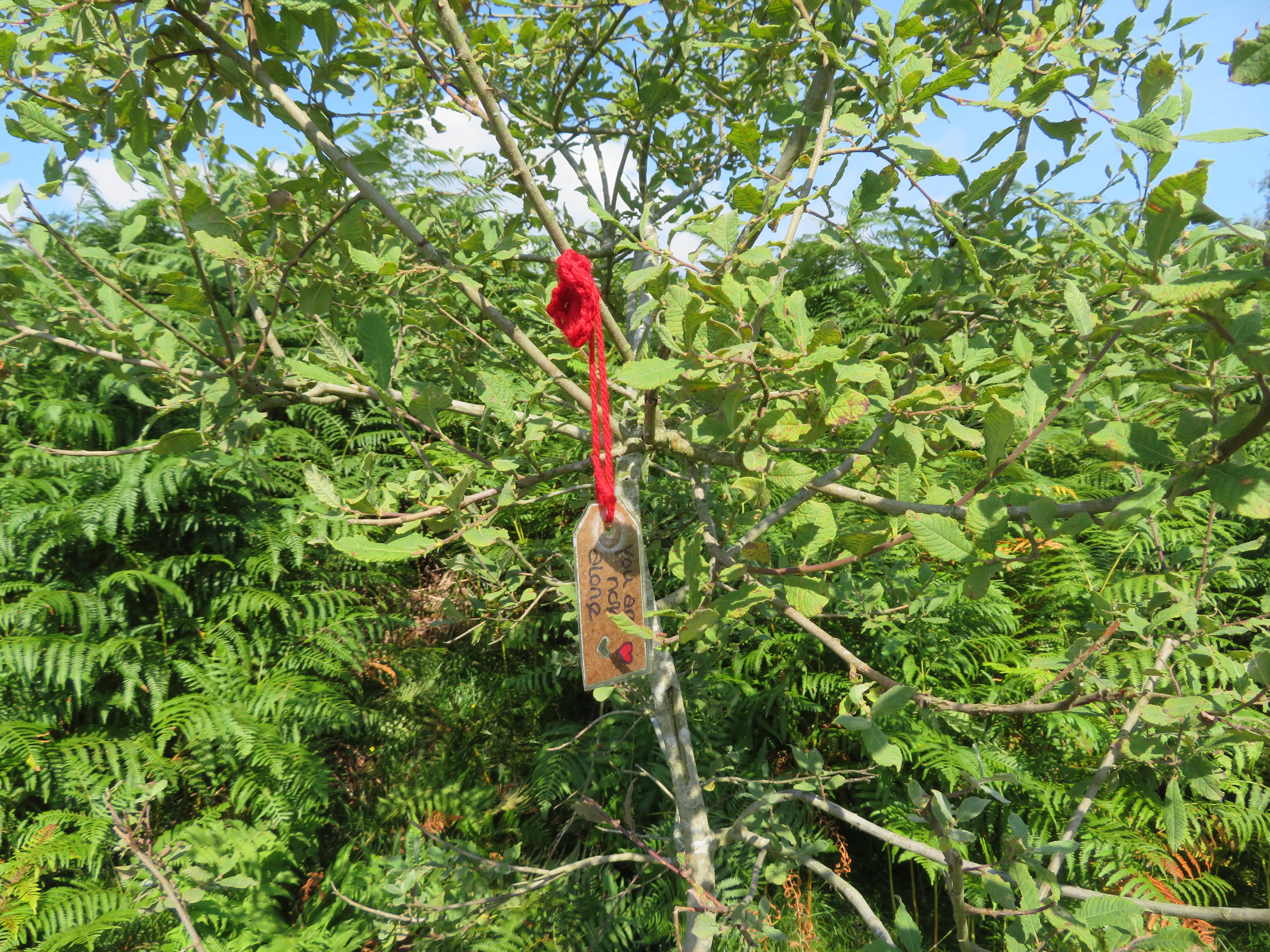 and from where we got our first view of Loch Lomond, her islands and Conic Hill in all her bare beauty. 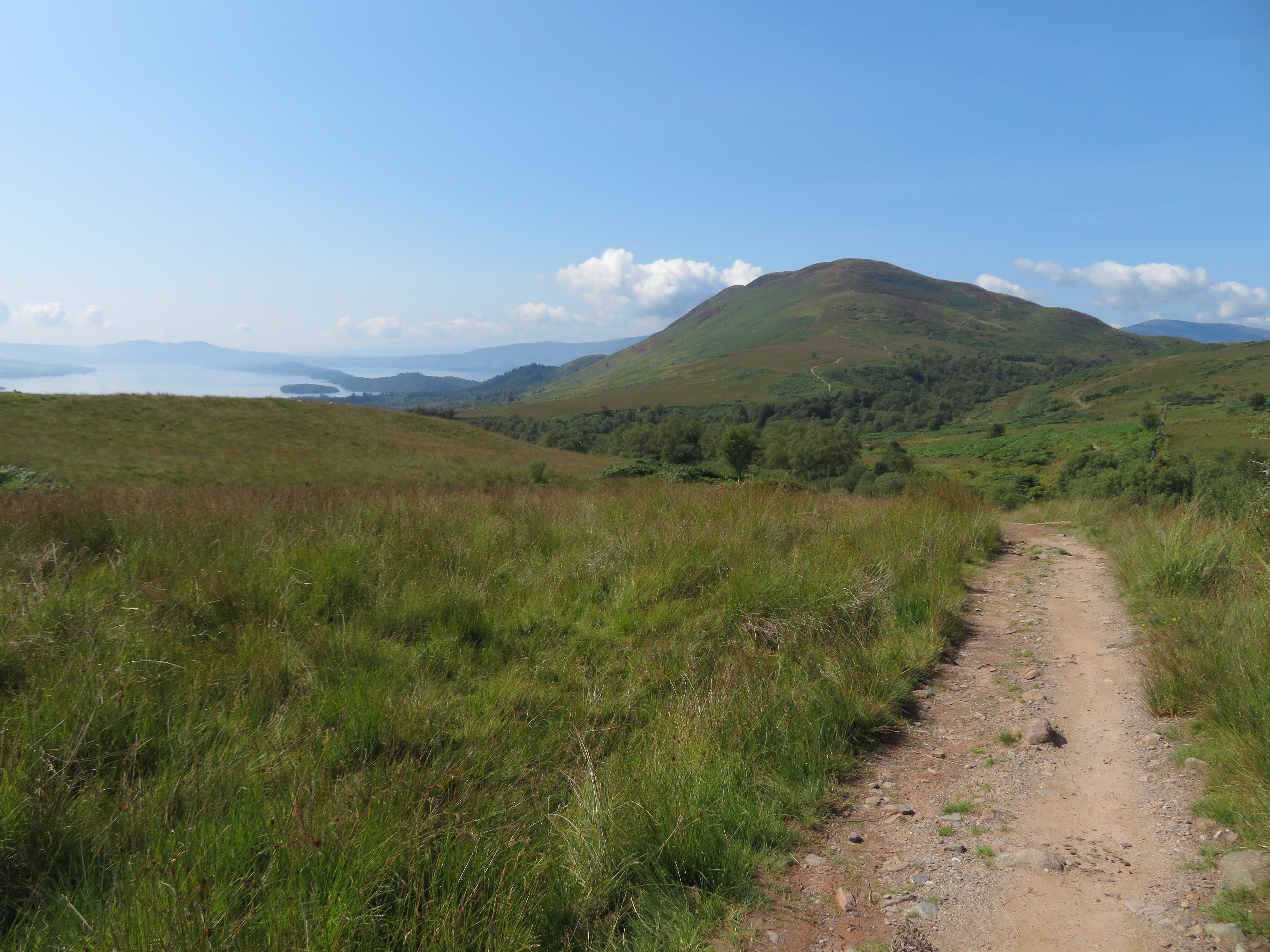 A view west towards Loch Lomond and Conic Hill 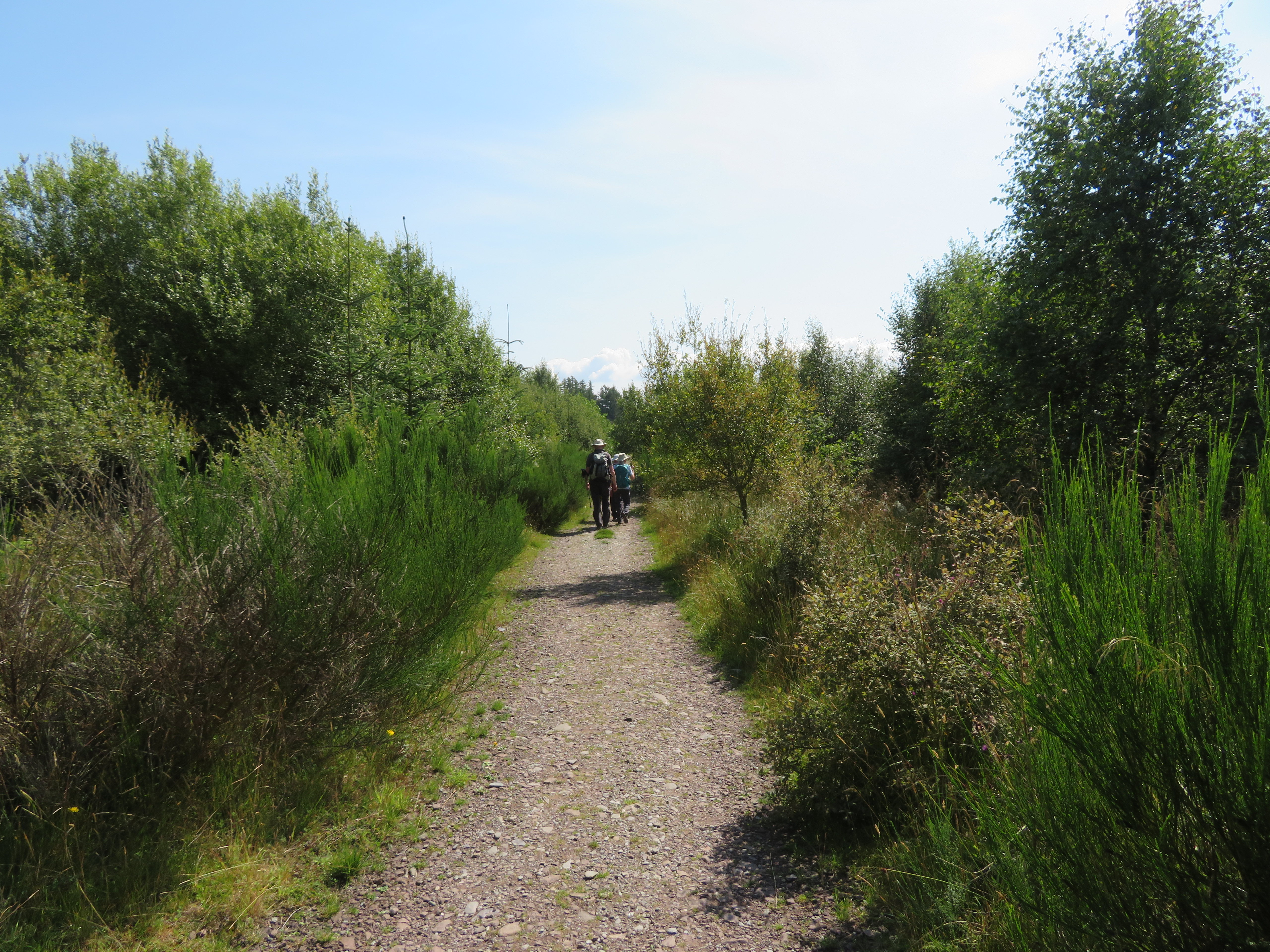 As we came upon this handy bench seat the ladies told us it was an ideal spot for another break, and it was, with a view looking across the loch towards the far hills and mountains. 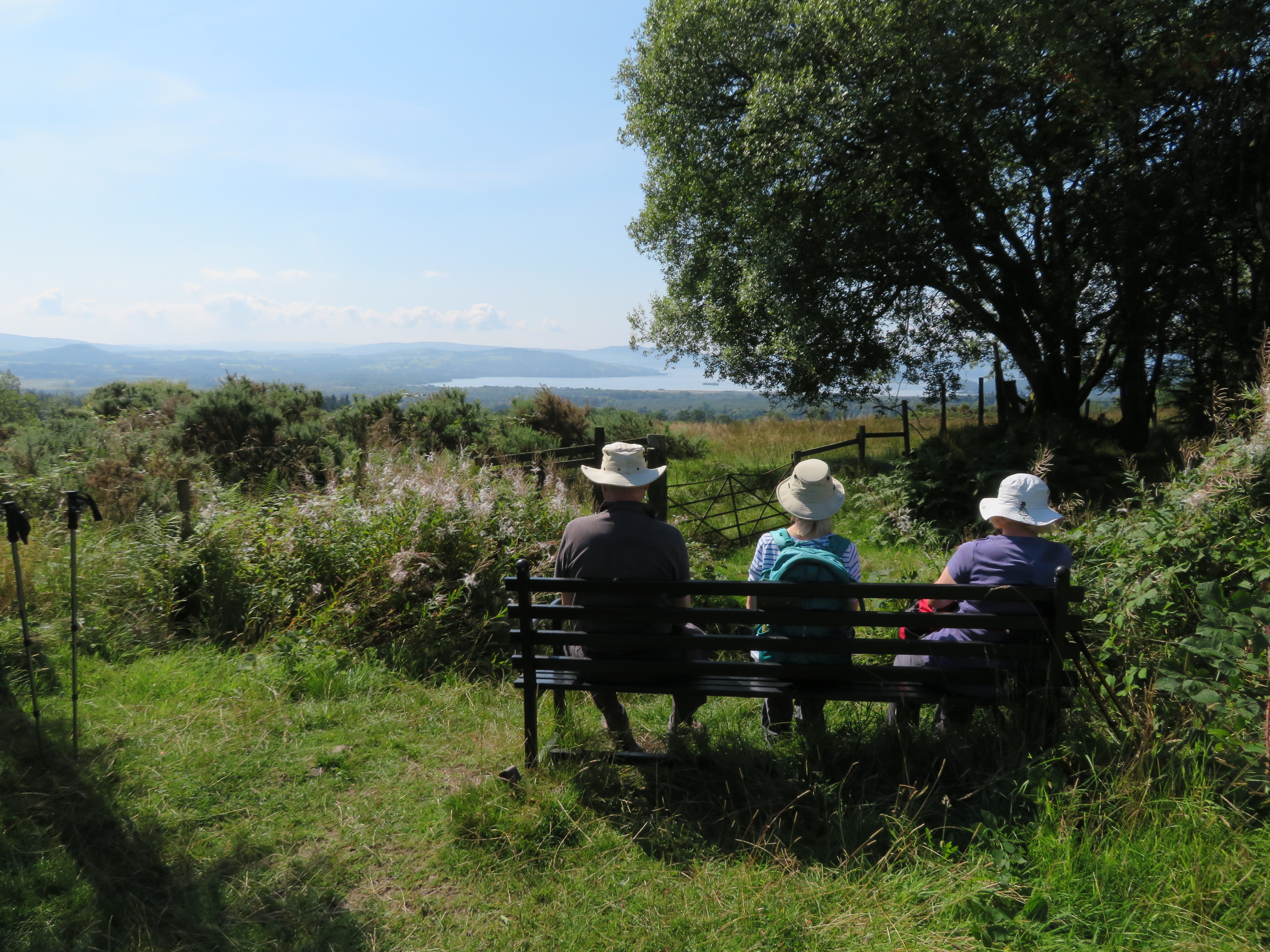 Pew with a view

We soon left the woods behind and found ourselves on Creityhall Lane on our way to the long slog along the B837 that is also part of the WHW for those that don’t fancy the climb along to Conic Hill. 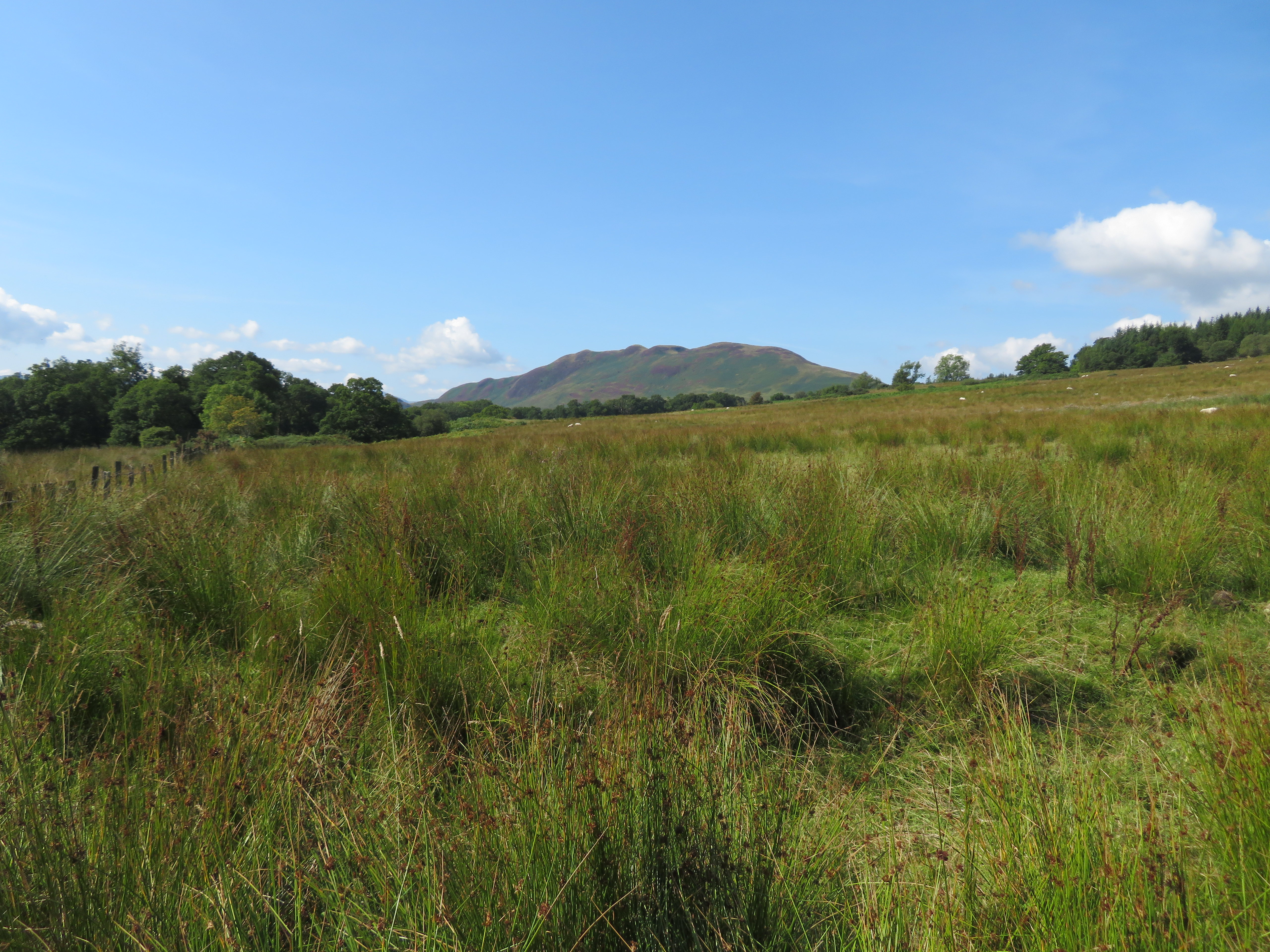 Although it’s called a road Creityhall Road is just a wide stoned up track. 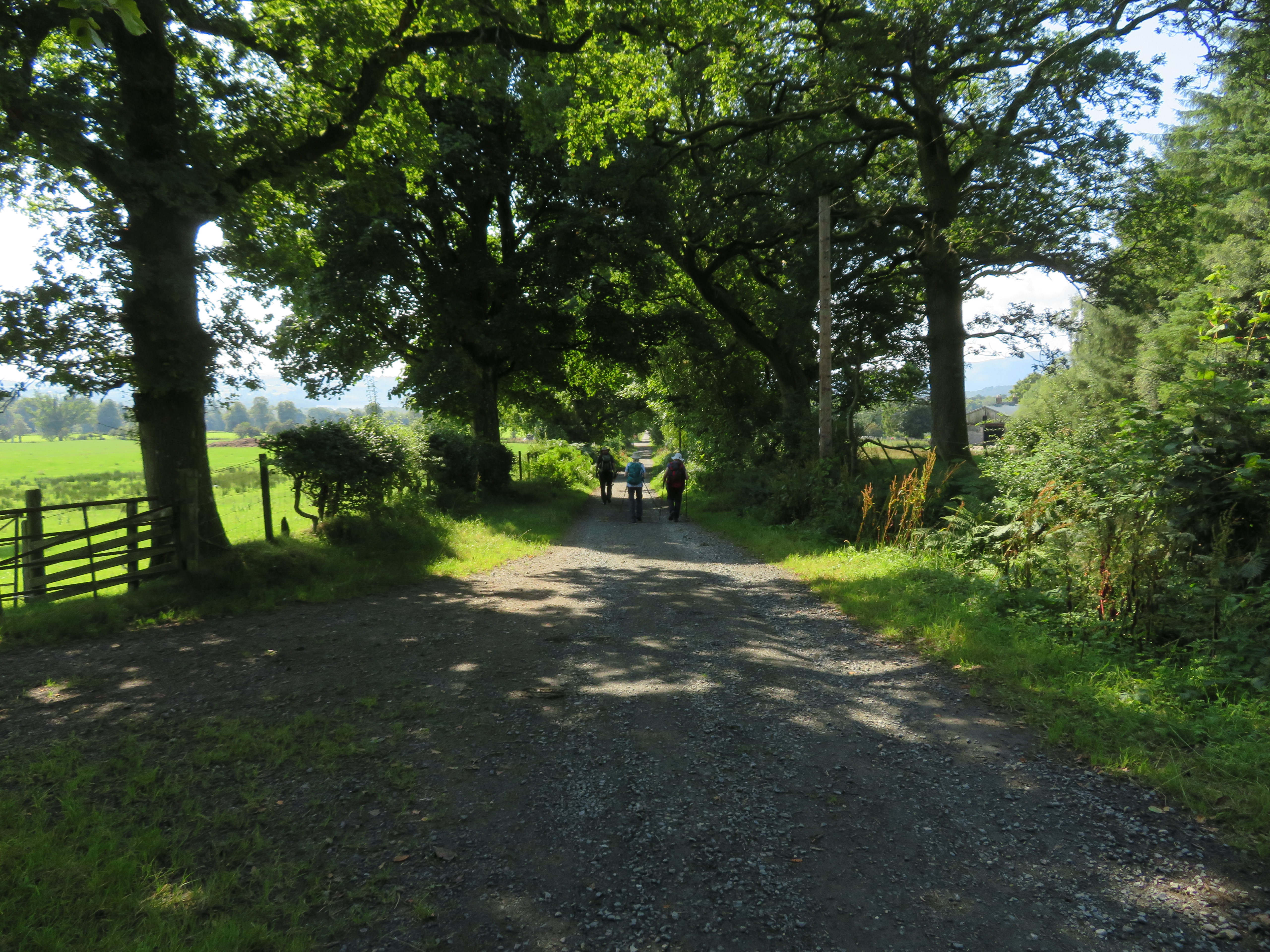 The last couple of kilometres or so are best dislodged from memory as there is nothing pleasant in walking along a busy main road especially when it’s as straight as this one with no end in sight. Getting back to Balmaha and a packed car park we queued for quite some time for a cone of ice cream, a welcome treat after the fumes and grime of the road walking.

A short walk, a low walk, but a very enjoyable walk and it’s just a shame that we had fog on our second day out in the hills of Scotland and yes, it would have great to see the views from the top of Conic Hill and those that are mentioned from the viewpoint on the way up but hey, we’ve had a good day despite that.