Sub 2000' hills included on this walk: Beinn an t-Sidhein 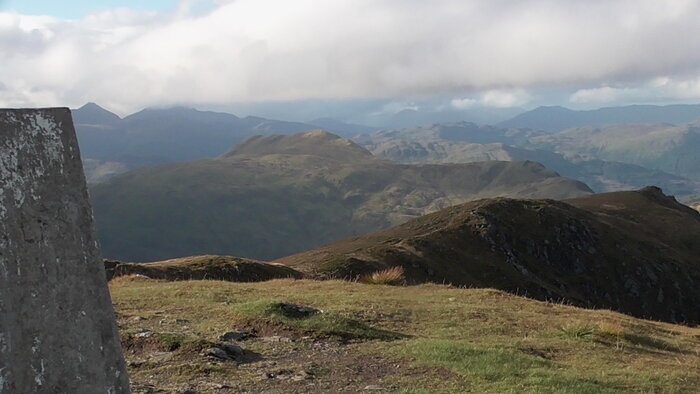 This was my second venture into Scotland since my statement of intent to do every British 'major' (2,000+) over the next 20 years. This time it was just a 2-day getaway, so I could only aim for the southern reaches, and I had selected Ben Vorlich with Stuc a' Chroin as my Munros, but firstly the pair of Corbetts, Benvane and Ledl. Linking these two took a little thought: clearly a ridge walk was on offer, but the main issue was where to start from, and thereby return to. I chose the forest village of Strathyre as the best option to give me a circular route, but it entailed a touch of unorthodoxy, which is always a possible recipe for hardship of one kind or another. Namely it was the descent that concerned me, but on close inspection of contours and other hazards, I reckoned I had a feasible one down from the ridge to Loch Lubnaig. The easiest option for trail-finding and distance would have been from the south of Ledl, and then simply return the same way. I have an aversion to doing that, though, which I'm beginning to think is more fool me. 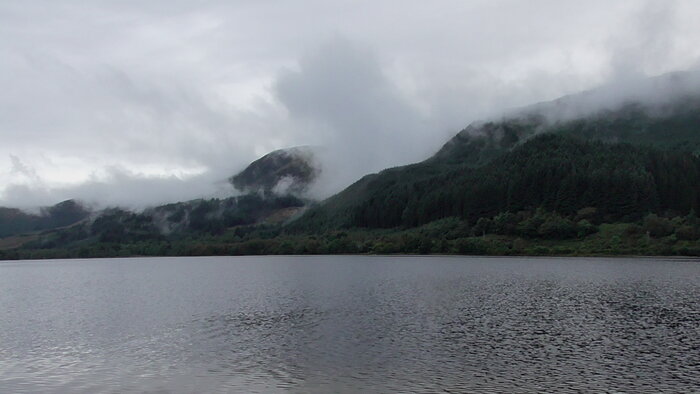 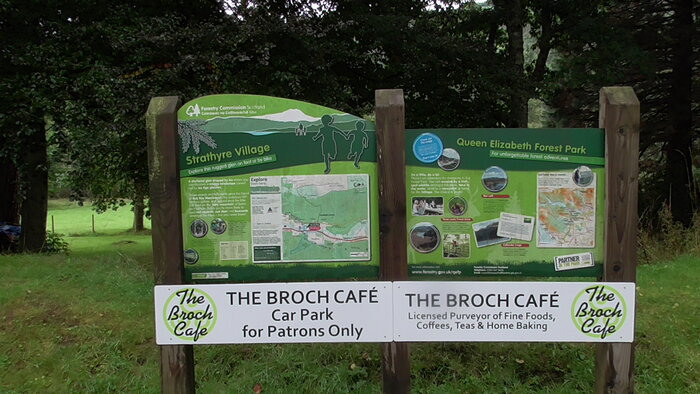 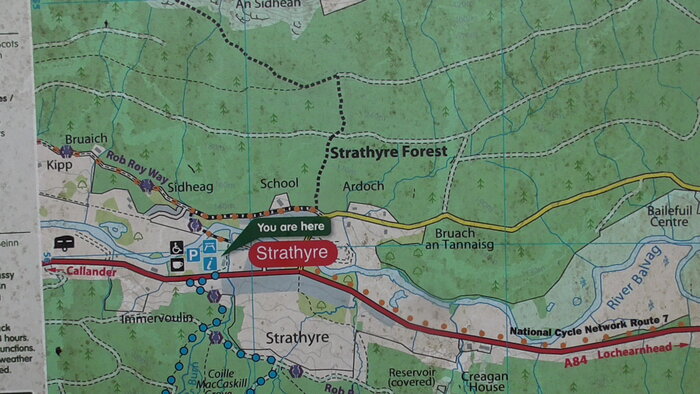 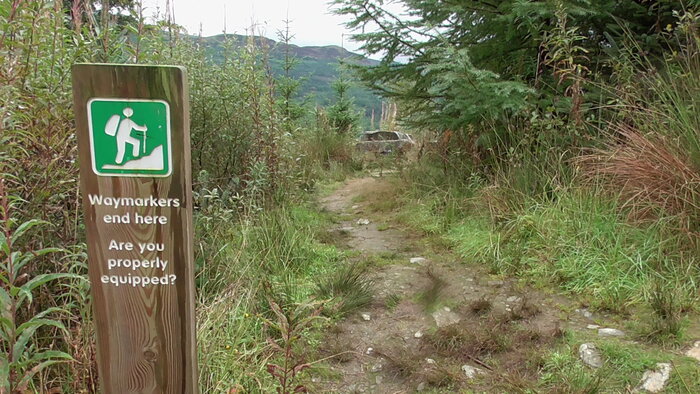 Clothing good; but I could have had a better map. 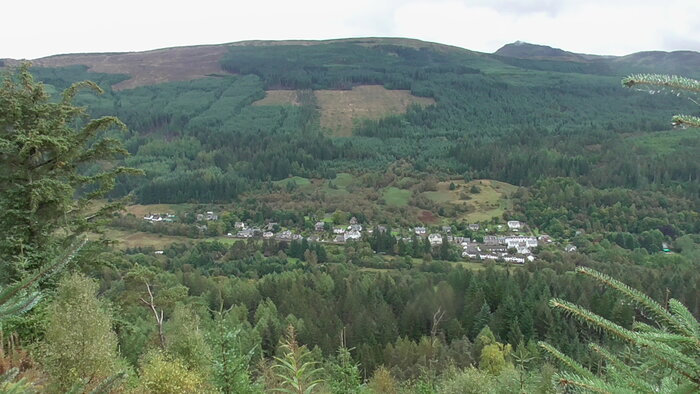 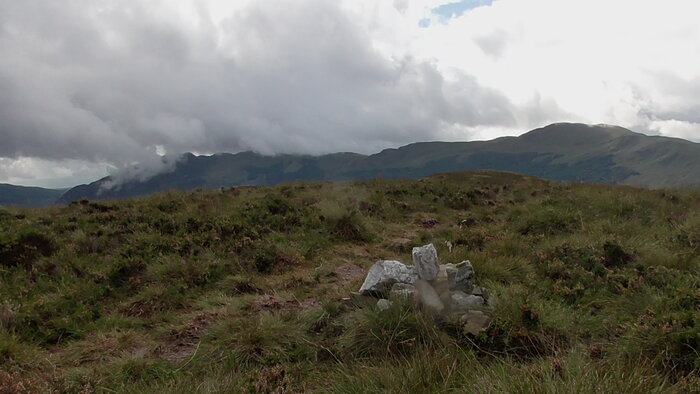 From Beinn an t-Sithein, the greater height of the Vane-Ledl ridge is seen, my route ahead.

Slightly more of an 'advantage' than a hardship, I decided, was the fact that my route up from Strathyre took me over a sub-2000 named Beinn an t-Sithein. Happily, I still feel this way in hindsight, for the outstanding panorama it offered. Not least, it laid out before me a complete view of the Benvane-Ledl ridge, looking grand but reassuringly practical. I could have skirted Sithein's summit, being slightly off-route and not needed for the tyranny of bagging purposes, but it added only about half an hour to the day. Now, I have ruled out doing the Marilyns as the logistical path to madness, but it would have felt highly negative to have missed this one. Not only did it seem to have touristy status, but I felt I was kind of 'borrowing' the path it kindly offered to access my key objectives of the day. It was the least I could do, and furthermore if I ever change my mind about Marilyns, now I have this one! I ploughed my own descent down its western flank, which brought me down more or less comfortably and legally through the little farm of Immeroin. I then gained the needed ridge in good time, despite a herd of highland cattle wondering what I was doing there. I was at the Corbett of Benvane (not to be confused with Ben Vane the Lomond Munro) nicely on schedule. 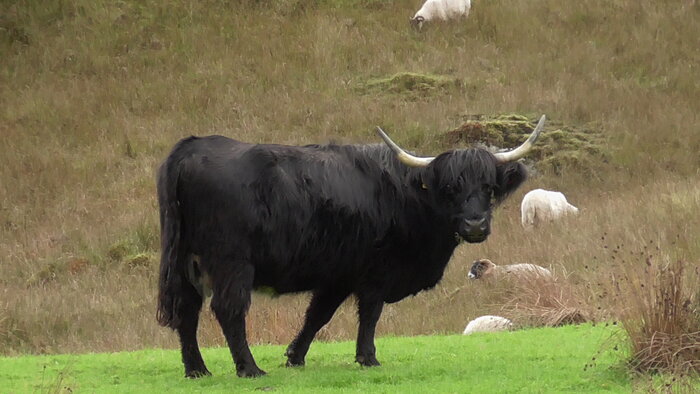 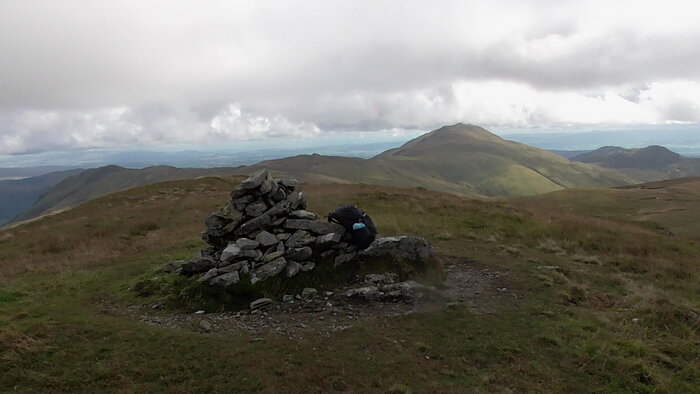 Benvane's summit, with the pyramid of Ben Ledl a few KM away. 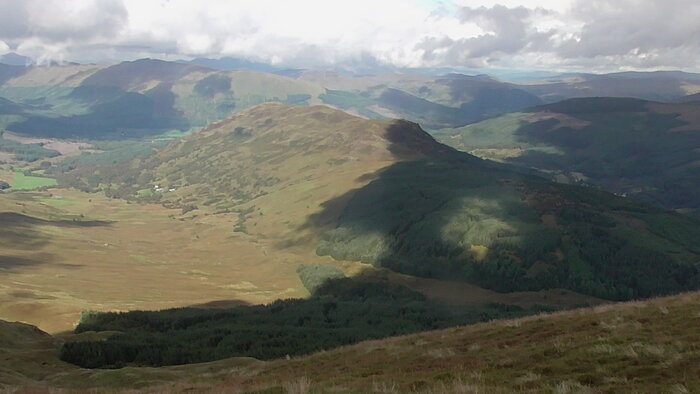 Looking back to an t-Sithein - it was well worth doing. 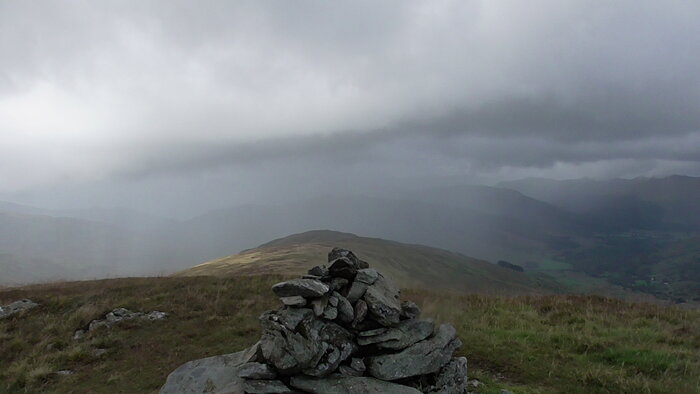 Weather threatened to close in up there.

My abiding memory of this day, rather than the spell of stress which came near the end, was of this high-level stroll from Benvane to Ben Ledl in conditions of mainly sunshine. Several brief squalls did no more harm than requiring some nuisance on-off-on-off of waterproofs, and on-off again, and trying to work out whether I was hot or cold. These conditions seemed to me the perfect definition of September, providing charismatic cloud-drifts that did justice to the substantiality of a Corbett. For brief spells, Ledl's beckoning form was completely swallowed in cloud, before emerging once more as if to encourage one in boldly going onward. Another big part of the satisfaction here, although giving a lashing of loneliness of the long distance walker, is in treading out a rarely undertaken route. Undoubtedly it is done, as proven by a the odd footprint and a mostly discernible path, but only by Corbeteers. Ben Ledl itself, however, is a different matter and stands proudly with its own well-established personality, complete with at least 3 other walkers and two fell-runners on this day. It is fascinating to stand on its summit to see laid out to the south the flatlands demarked by the Highland Boundary Fault, but endless mountains to the north. Also, just in case we need a stark reminder of the seriousness of our hobby, here one can reflect at a cross erected in memory of one Sgt Harry Lawrie B.E.M, killed on mountain rescue duty in 1987 on Ben More. 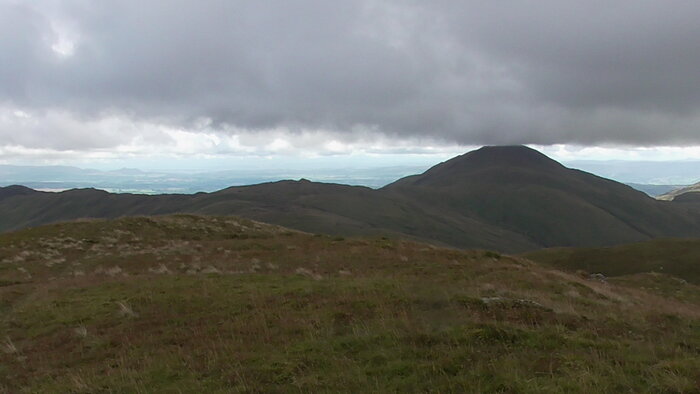 On the way to Ledl. 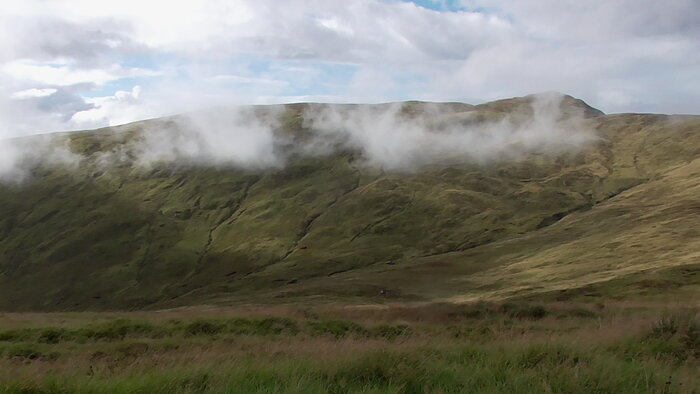 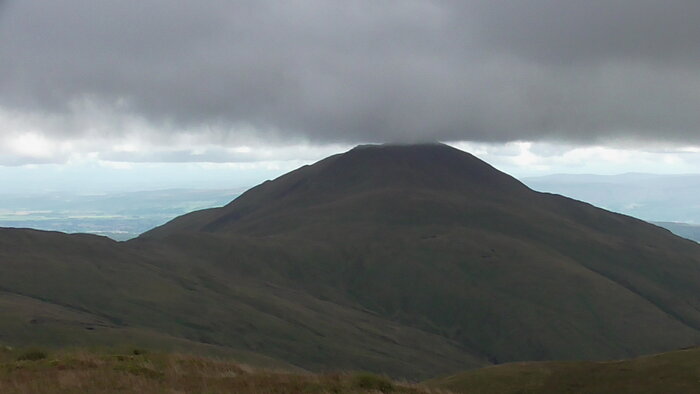 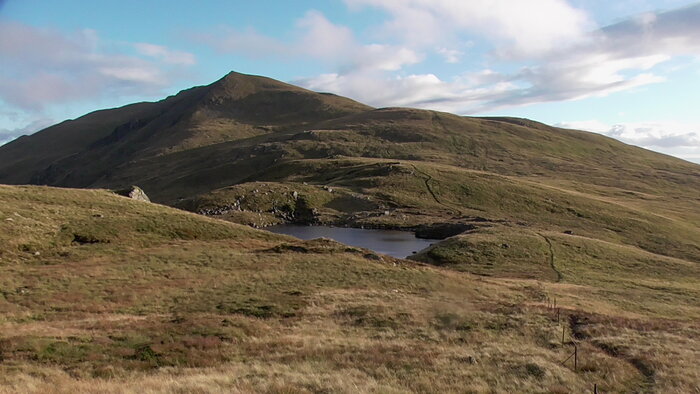 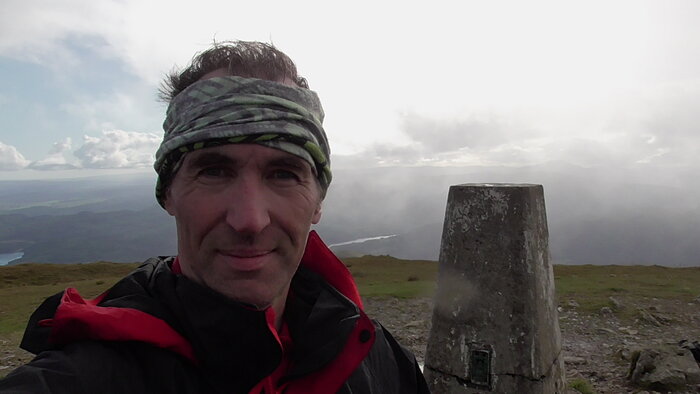 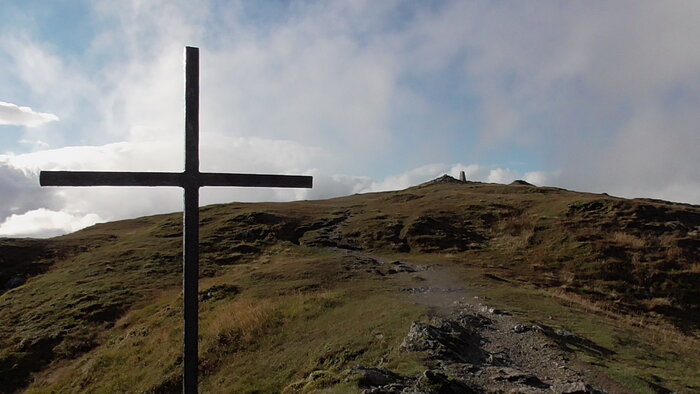 With such things in mind, I'm making a pact with myself not to attempt the type of descent I pulled off here in anything less than good weather conditions and with plenty of daylight left, and also insist on using Harvey's mountain maps for everything but the most simple routes. I had pinpointed a tiny lochan, unnamed (on my map at least) and half a KM north of Lochan nan Corp, as the point at which I would make my bid for the Strathyre valley far below. There was nothing in the contours to cause undue peril, but... well, there was this forest. I knew there was no path through it, but from above it looked feasible enough, and I hoped I might even find a firebreak or two to help me through. I didn't - instead, I found myself, for the last hour or so of an otherwise nicely conceived and executed day, battling and scrambling through raw woodland, the adjective Amazonian springing to mind, minus its climate and creatures. I do not think it is too melodramatic to say that if you did meet with unconsciousness in there, you possibly would not be found for a hundred years, if ever, as humanoid bones poking out of the moss and soil.

The difficulties such a 'walk in the forest' throws up are numerous. Underfoot is all manner of mud, sponge, fallen branches and rotten debris, with a generous offering of rocks which often only reveal themselves when you walk onto or into them. Not least is the plethora of channels and rivulets, or downright gorges, which the forest keeps secret from anybody who doesn't study a map carefully enough. I knew these were there - the clue was in the term 'waterfalls' on my OS Landranger 57 - but when I strayed close to one of these I decided to use it in the vain hope it would lead me down quickly. It proved far too sheer, however, and I earned myself a mini panic attack thinking I might be trapped. If I couldn't go down, I'd have to go up (simple enough, that!), but the prospect of another hour's slog to get above the forest all over again - with no guarantee of not running into another 'trap' - was seriously unappealing. By then it would be getting dark, and even my fine head torch by no means made that a happy prospect. In the event, a fevered scramble got me out of the gorge and I was able to resume working downward, but it entailed literally forcing and crashing my way through. With great relief, I spilled out onto a forestry road, which would lead me all the way to Strathyre village, where I arrived as darkness fell. 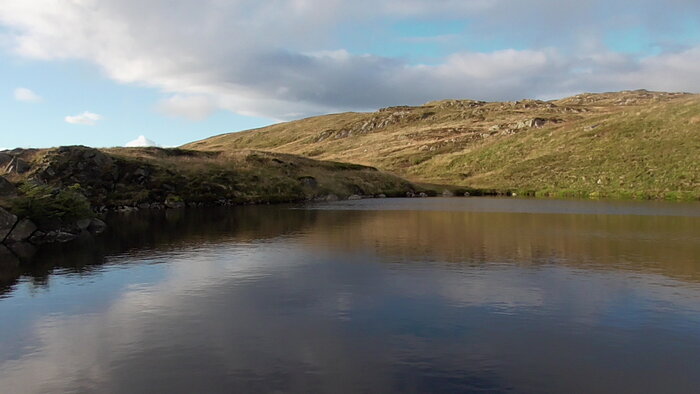 Place of stillness and calm, before the rigours of descending, 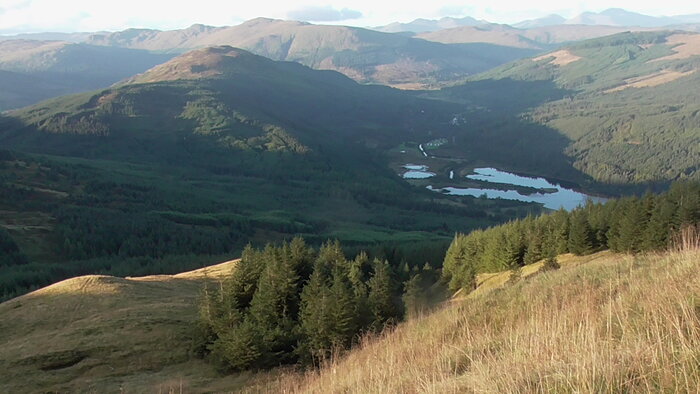 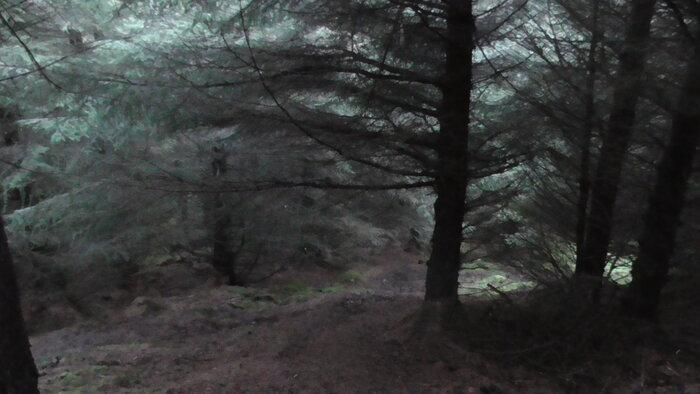 
our_route.gpx Open full screen  NB: Walkhighlands is not responsible for the accuracy of gpx files in users posts
As a footnote to this adventure, I failed to do my second day as planned. Sleeping in the car, as is my system (which I actually enjoy and find comfortable), I simply did not want to wake up when the time came to start Stuc a-Chroin and Vorlich. I don't know if it was the nervous energy expended in the forest, as I wasn't too physically tired to do it, but instead I spent a relaxing afternoon in a Callander bookshop and cafe. In my continuing adventures, I am sure I will be treading that line between pushing to achieve (trying desperately to avoid that word 'bagging' here!) and just enjoying visiting these regions for culture's sake. I need to accomplish 5 peaks on average, for every pair of walks, otherwise it means either an extra journey to fit in somewhere or taking longer than 20 years to have them all done, and I'll be doing well to have 20 more years of sufficient fitness in any case. To be or not to be, to bag or not to bag - uh, I mean summit - ambition versus enrichment, this is a philosophy to be continued. This time, by returning home a bit earlier it gave me a chance to finish painting the living room walls as a nice (I hope) surprise for my partner before she returns from a little holiday of her own with her mother in Bowness, Cumbria. This perhaps, more than anything else, speaks volumes in the search for perspective and the meaning of life!

I will report back on whether she likes what I've done.