Last minute weather looked a bit dodgy, but nevertheless, we picked up Harvey and set out for Huntly - dawdling a little to allow the weather to settle and assisted by some tractor traffic ca'in grain from the combines, still working furiously to complete the tail end o the hairst.
Just as we arrived at the parkup in an extinct layby, the rain stopped and we dismounted. Walked along the road to a gate leading to the grassy track up to the comms masts. At the top of Cairn, the farmer had arranged a load o big stanes into a circle forming a faux archeological site. We descended towards the fence, hoping to find another gate, but diverted back to the original gate when none appeared.

Walked along the road past a Charolais bull ( I think) who gazed at us dis-interestly. The Charolais ? Bull near Cairnhill.

Cairnhill farm has a maintenance business attached with some additional sheds in the process of being built.
At the junction with a brawly surfaced road, we cut a line through the stubble to the top corner of the field. Surmounted a fence into an overgrown clearfell brash to get to the top of Ba' Hill. Up through the stubble to Ba' Hill Returned the same way past the bull, who when we stopped to take a photo, was somewhat startled and louped about a bit . As we hurried back along the road, we could hear it snorting, which made us listen intentley for the sound of thundering hoofs in pursuit of us. Made it back to the car unscathed.


Clashmach and Kye Hills
Squeezed in at the entrance to Beech cottage, at the end of ther public road, being careful not to damage any of the flower & shrub plantings at the roadside. Followed the path past the cottage up the hill by a comms mast and wind turbine - birling a way in the breeze for a change. The bridle path up Clashmach Wind Turbine near the path up Clashmach


A memorial bench was tested about half way up Clashmach. 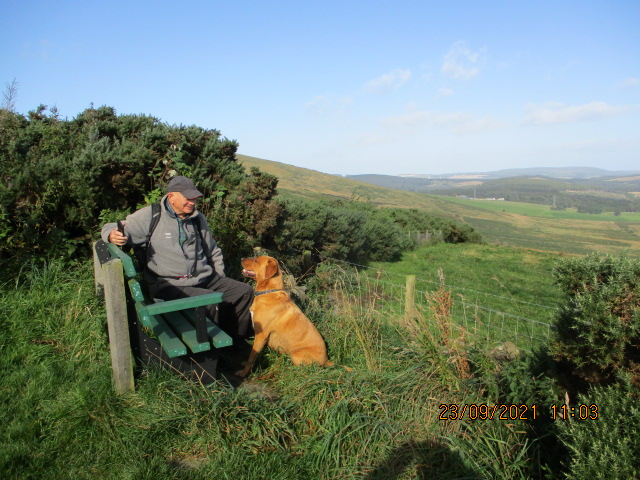 Just as we set off again, we heard voices from further up the path. A pair of delightful ladies wi a wee wally dug stopped for a chat. One was from Orkney, the other from Newcastle. Seemed like the opening line from a joke........An Aberdonian, a Dundonian, an Orkney lady and a lass from Newcastle met on Clashmach...............
Anyway, after a bit of chat, we parted after I sang a line from the "Lampton Worm" - to make the Geordie lass feel at home !
Next we passed through a couple of deer-fence gates, one of which had instructions - which even I managed to crack. 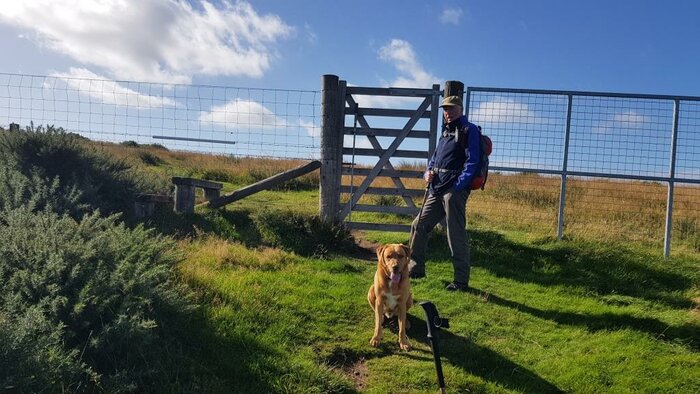 One of the fine gates on the path up Clashmach

This bought us out on to the top of Clashmach with a great view down to Huntly. GordonC inspects the trig at a breezy Clashmach A great view of Huntly from Clashmach

Just as we reached the top, we heard the first of the inward migrating skein o geese arriving on the prevailing NE winds.
We tarried not on Clachmach and headed off to Kye hill, following the path down to where we had to make a decision. Looping round the obvious track or more directly along beside the fence. An animal track made the decision for us ( we hate losing height un-necesarily ) and we followed a combination of animal tracks and old ATV marks parallel to the fence on the N side. The grass fields on the other side of the fence looked inviting, but we knew there was livestock and many fences on that side, albeit, most with gates.
Near the top of Kye, we came across a fence on our side, so we elected to hop over the fence into the grass field, as the current side was festooned by heather and longish looking grass. Up at the corner of the grass field, we hopped back over the fence at a sturdy steel strainer, firmly cemented into the ground. 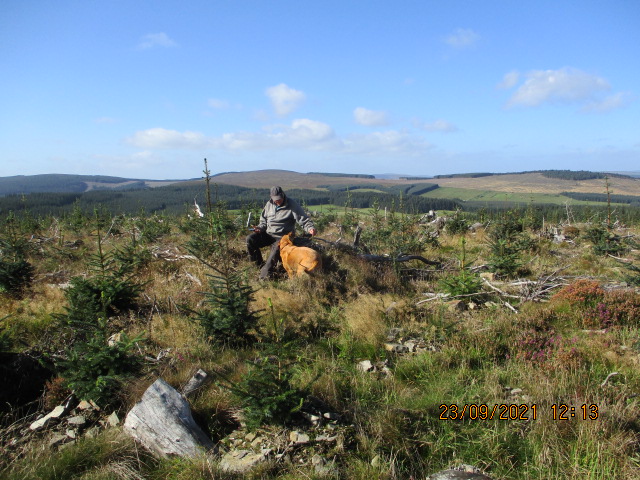 GordonB at the top of Kye Hill amid the brash

Wandered over to the top area to get the spot, then hunkered down behind a couple o young fir trees out of the breeze for our piece. Gave H his lunch, which as usual, never touched the sides ! As we'd had an opportunity to scan the terraine on other side of the fence from the grass field on the way up, we decided not to cross into the field on the way back. Back at the crosswise fence, as I stooped to get through, I stumbled and fell on to my side. Normally this is brushed off as inconsequential, but I felt my lower rib crunch a bit when it hit the ground.
I lay there for a minute or two to recover my breath, then looked up to see GordonC's concerned look. He had visions of having to carry me back over Clashmach! I assured him that wouldn't be necessary and delared a bruised rib then groaned up from my prostrate position. A painful deep breath then off back to the car, over the hill and far away under my own steam

Managed to get in the car by taking short breaths, then drove off to Broon Hill - round the corner.
There are two Brown Hills in the area, so we labelled this one Brown Hill ( NE), whilst the other will be Brown Hill (SW). Parked up at the end of the forestry track, then trundled off to find the branch up to the top. This we did without difficulty - noting on the way, that the surface of the track was quite smooth and with the track gate open, we could've driven up to this point..
At the second tracks' high point we tried to follow an old forwarder track up to the trees. As we approached the standing trees through the overgrown brash, we had to negotiate some fallen trees. Once we'd negotiated them and gained the forest, we wandered around a wee bit to find the highest point. GordonC finding the top of Broon hill in the trees.

This coincided with finding an easier exit point from the standing trees round the fallen ones, but still, negotiating overgrown brash was only mitigated by it's brevity. Back at the track, we flirted with taking a direct line down to the lower track, but decided that adding a broken leg to my bruised ribs wasn't worth it, so we took the easier long way back round the track.
Back at the car, my evil mind contrived that I'd never driven down the top part of the A97, but in doing so, we had to drive past our favourite Bistro in Alford - what a coincidence !
Worse than that - I've had to draft this blog whilst taking my horrible medicine - a dram o Talisker whiskey.........
Somebody has to do it - eh !