Enjoyed, my second stay in Dingwall, after a memorable day on the Mullardoch hills. Didn't get so lucky with my room this time, previously getting upgrade to one the size of a tennis court. This time was more the size of a ping-pong table

Still, was clean, cheap and cheerful. Woke up to heavy fog, which took about as far as Aviemore to finally clear, to another fine day, as I anticipated meeting up with Lawrence, for a trip into the Alder Hills, though we had different targets in mind.

I didn't have long to wait, as he duly rolled up to the railway crossing. Little did we know it would soon become centre of controversy about access. Luckily enough, no detour required for us and soon we were on our way enjoying the fine weather and scenery, cycling down Loch Ericht. Did not envy those on foot, making their way in, or out, one bit!

Eventually we passed the grand Ben Alder Lodge and made our way out into the open countryside, where I began to contemplate whether to cross more directly to Culra, or go round via Loch Pattack, as me and Jaf had done on visit for his 200th. Culra bothy. The (very) eagle-eyed might spot my buddy, Lawrence on his way to melt-down, heading NW up the the steep slope of Càrn Dearg 🙂

We stopped to deliberate and I made the executive decision to go the direct route, to at least see what it was like. Mistake, or at least it was for poor, Lawrence who took a couple of heid-ers off his bike

The track is narrower and has plenty bumpy, rutted sections which requires maximum concentration and even then, sometimes the pedals catch the ground and give you a right good fright

Overall though, I think it is was quicker and I enjoyed the ride more than going via Loch P. 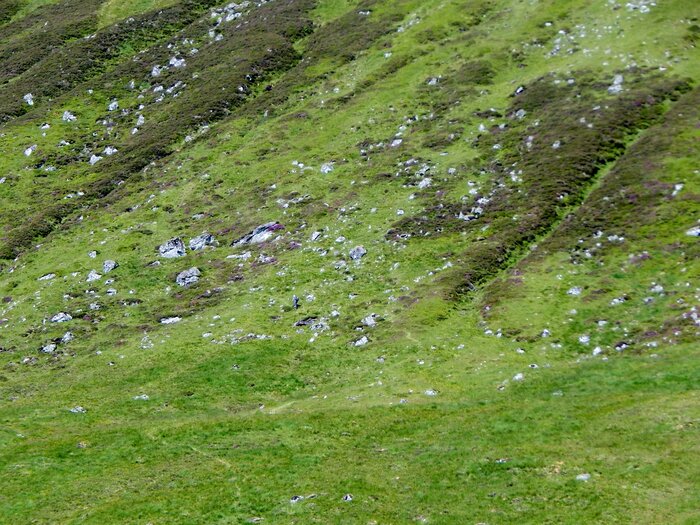 Aye, that's him, zig-zagging as usual! 🙂 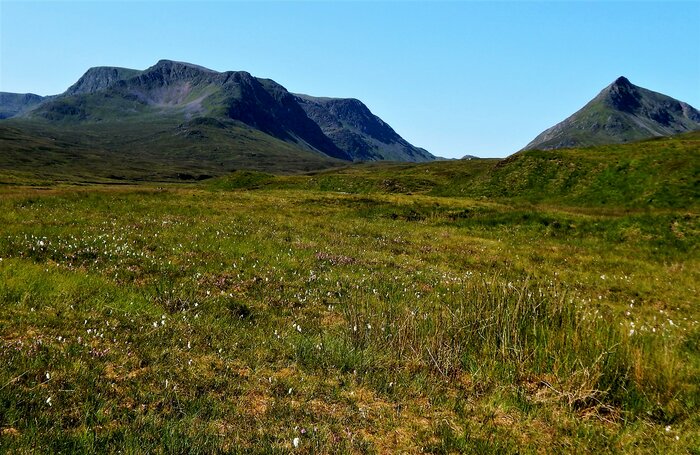 Despite being a bit battered and bruised, Lawrence soon caught up and we made across the river and up to Culra Bothy, where we were soon accosted by the next challenge. Cleg hell!

Hunners o' thum, was roughly what he said

Bikes were quickly abandoned and rapid departures made on our separate ways, Lawrence doing the 4 to the north of the Bealach Dubh and me doing the Ben Alder two. The idea in mind being that we might finish close enough together to join up for the journey back out, or if not, just go back solo. My hills to the left, Lawrence's off to the right. On the track to Ben Alder. The Long Leachas ridge, centre.

I followed the route up via the Long Leachas, pretty much as per Walk Highlands, though it wouldn't do without a wee wander off track here and there

The going was good till I crossed the Allt a' Bhealaich Bheithe, then got tougher, as it steepened and lost the track, before getting back on line again just below the ridge, which was a very enjoyable climb, with one or two slightly exposed, scrambly bits, but nothing at all serious. Some relatively easy scrambling on the Long Leachas. But, why is it called Lancet Edge? 🙂

It was hard going as the energy sapping day before caught up with me. Eventually things level out a bit and I was able to enjoy the longish, but flatter trek out to the summit. Met a couple of guys then who had come up form Ben Alder cottage. If I remember rightly, it was about here my camera batteries decided they were more exhausted than me

Enjoyed great views from the summit, Lancet Ridge, Beinn Bheoil, Munro's in all directions, but never saw further sign of Lawrence on his round. Lancet Edge, with Geal Chàrn, at the back. 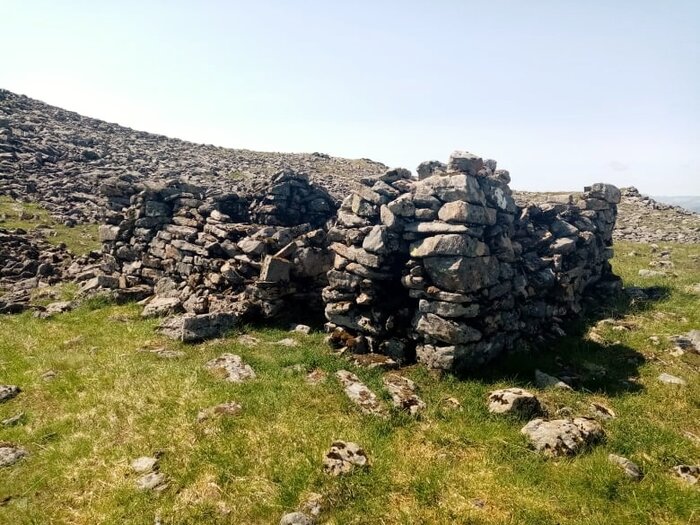 "Stone ruin just north below the summit is all that remains of a camp set up by Major General Thomas Fredrick Colby as part of the original Ordnance Survey mapping party," apparently. WH's.

Would he be ahead of me, or behind? I should be back sooner, but he moves so fast! Ach, better keep moving, so on I went round the corries, enjoying the cliffs and stunning scenery. Enjoying it too much, as I went too far round Garbh Choire and couldn't find trace of the way down Sron Bealach Beithe, to the Bealach Breabag. Soon back tracked and traversed my way back on track, which is very steep all the way down. Stopped for a breather and refreshment before tackling the ascent of Sròn Coire na h-Iolaire, then Beinn Bheoil, which was a bit taxing by this stage but, enjoyable enough all the same. Great views over to Ben Alder, Loch Ericht, etc etc, though I had to rely on the poor mobile for pics. Coming off Ben Alder summit. Smile, because I forgot to take pic at the top and wasn't for going back 🙂 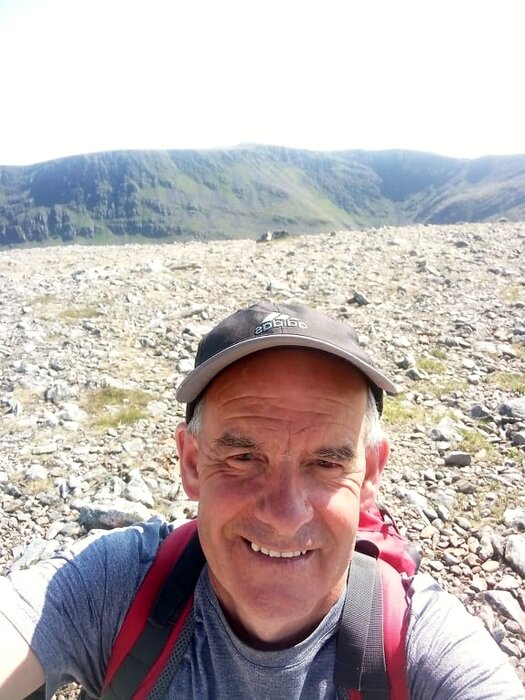 A wee selfie on BB. 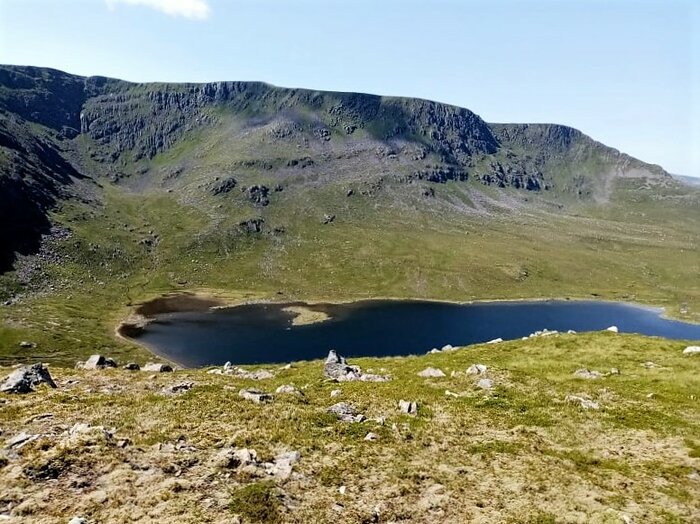 Over to Ben Alder.

I thought I handled descent off the shoulder fairly well, but again seemed to lose the track among the heather when down on the flatter stuff. No fun crunching through that, till I spotted a few others and thus got back on path, which gradually winds back to the riverside and Culra. Was pretty jiggered and well roasted by this point. No sign of Lawrence, but his bike was there. A good excuse to stop to dip the feet in the river. Aaaah! That feels great! Almost tempted to go further but, there were folks camping nearby Could just make out Dalwhinnie at the top of Loch Ericht. Time to dip the feet in the Allt a'Chaoil-reidhe, while Lawrence completes his 4. Look back at Culra, on the way out. Cooling the feet off after another roaster of a day.

Once ready again, I took a trip back upriver on other side to have last look for any signs of Lawrence. Nup. Started on the cycle back out, but having one last look back, saw someone heading for the bothy. Back for a closer look and soon knew it was the boy! As luck would have it, I was the one to have bother as my chain came off and was very difficult to get back on, having managed to get a spoke in the middle of the mess. Damn, I cursed as I could hardly stand the thought of walking back from here

Anyway, eventually got sorted and enjoyed the ride round Loch Pattack and back to the car, hearing some of Lawrence's exploits going round the 4. (Quietly relieved to hear he had found it tough going too, especially the long haul back along the bealach Dubh! I was quite tired myself, but left with lots of great memories and thrills from my two days away and boy, how I enjoyed my fish and chips in Aberfeldy! The real high for me. Well worth the effort