As if often the case, I'd been checked the forecast for munros both East and West throughout the week, and it seemed like every time I checked, the forecast was completely different. What was apparent though, was that West was looking to be rainy on Saturday, and everywhere was showing strong winds on Sunday. So I turned my attention Eastwards for a Saturday walk.

As I still had a few bike 'n hikes on my list, and I fancied a final blast on my mtb before the colder weather sets in, I decided on Càrn Bhac and Beinn Iutharn Mhòr. Not a pair I'd fancy on foot, as the ~6miles each way on a track doesn't appeal (and the walk out always feels twice as long as the walk-in), but I read some walk reports and figured I could probably do it around 7 hours with the bike. This plan turned out perfect, as my brother was run the Ochills Ultra 50 from Perth to Stirling, so I could drop him off in Perth and 5:30am and be at the Inverey car park easily before 7am.

And so, at around 6:50am, I arrived at Invery, had a banana, a couple of pork pies and some Lucozade, changed into my lightweight mid boots (easier to ride in), unloaded the mtb, and set off - time of departure 7:10am. 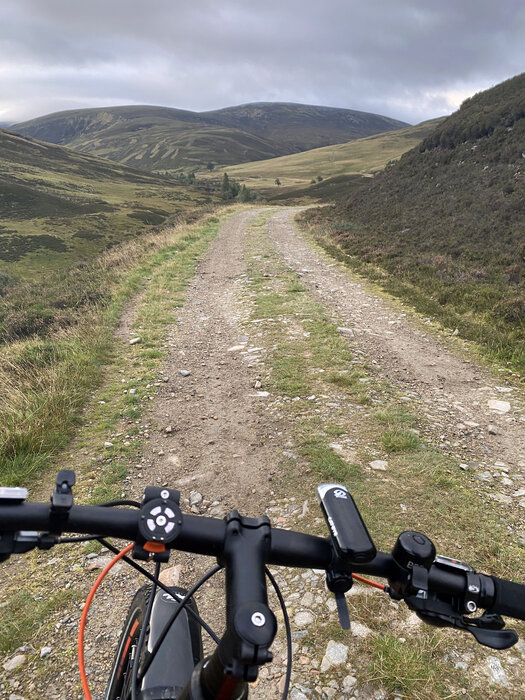 The ride-in starts off with a couple of ascents in the first mile - nothing excessive, but with legs barely warmed up, the inclines felt tougher than they looked. Although there was a strong cool breeze, I started to feel the heat/sweat from exertion, so I quickly ditched the softshell, on the first bridge - the surrounding hills were cloud-covered so visibility was low, although conditions at this point were dry. 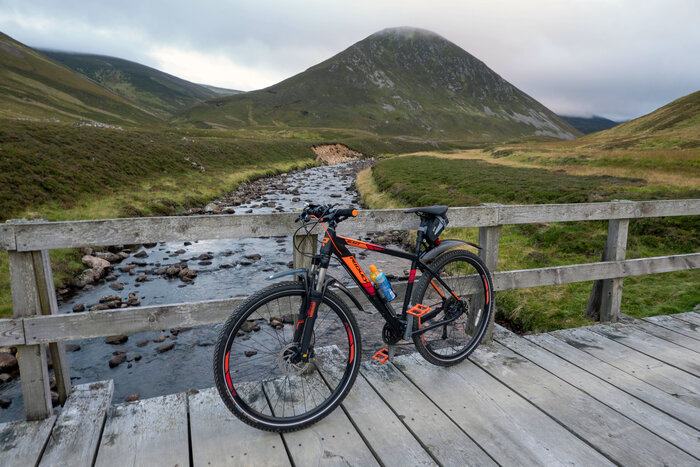 Clouds on the hills during the ride-in, didn't give me much hope for summit views.

The decent track through Glen Ey is quite good - little rough in places, and I was thankful for the front suspension (no rear suspension on my fairly cheap mtb), but other than a few very slight inclines/declines, it felt fairly flat. As it turned out, I had ascended almost 200m by the time I reached the ruins of Altanour Lodge after 6miles of riding. At this point, I was 50mins in from Inverey (8am). 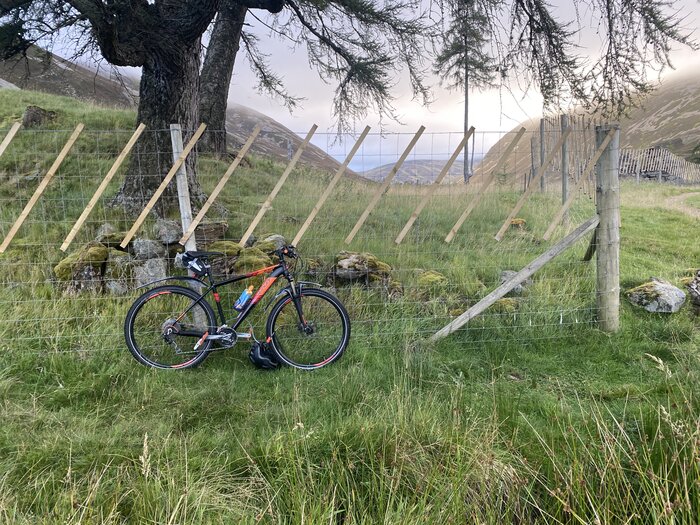 Bike locked up against the post/fence by Altanour. Mine was the only bike there when I left, but there were 5 more bikes there when I returned.

After securing the bike and taking a quick drink/snack, I set off on foot. I had mulled over whether to do the route anti-clockwise as per the WH description, or clockwise to get the steeper slopes of Beinn Iutharn Mhòr over and done with first, but ended up taking the path to the right, where the trail forked to follow the anti-clockwise route. This turned out to be a good call as I was later glad not be descending the rocky slope off Beinn Iutharn Mhòr down to the bealach. 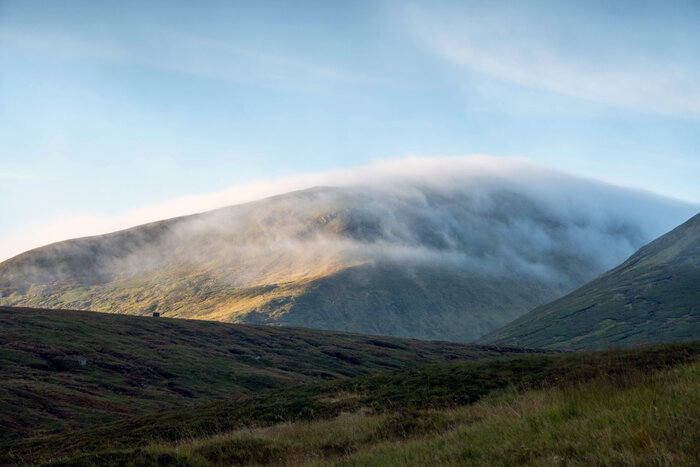 The ascent up Càrn Bhac was fairly shallow for the most part, mostly dry but with some wet peat bog sections that I was easily able to get around. The path is quite defined, especially on the upper section (you can see it clearly from Beinn Iutharn Mhòr) and within 1h 10mins after leaving the bike, I was on the first summit. Unfortunately, from around 700m, visibility was low - though somehow the sun managed to break through up on the summit plateau for a short spell. 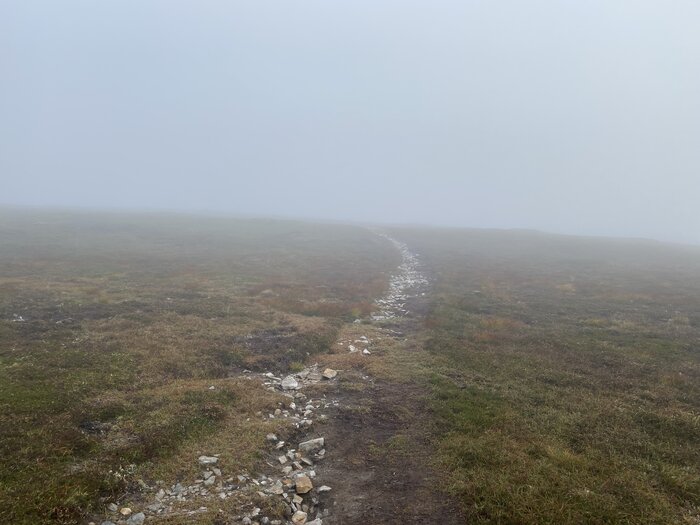 Ascent path up Carn Bhac - nothing much to see here.

I did the customary tap of the summit cairn, took a wee summit selfie, and moved on. The walk over to Beinn Iutharn Mhòr took longer than I had expected and mainly comprised of a series of ups and downs over grassy terrain - for the most part there was no path that I could see, just a lot of tufted grass and peat hags until I reached the low point ~750m before the pull up the side of Beinn Iutharn Mhòr. This ascent is surprisingly steep, with the top 150m being a lot of loose rock - unfortunately also damp during my ascent, which made it loose and slippery. This is where I was very thankful I had not decided to walk the route clockwise, as descending this would have been very unpleasant. Again, I was in the clag above 800m, but the wind was picking up as the morning progressed, and I caught occasional views out over to Carn Bhac. 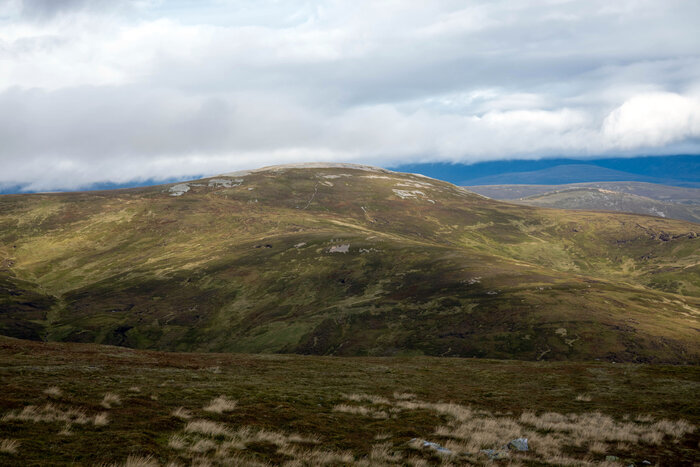 Carn Bhac as seen from part way up Beinn Iutharn Mhòr - you can make out the strong path on the upper slopes.

3 hours after leaving the bike, I was quite happy to reach the summit ridge of Beinn Iutharn Mhòr, where a clear path took me along to the actual summit cairn (there are large cairns at either end of the ridge). Still quite claggy at this point, but the wind and sun were trying their hardest to push away the clouds, and I was starting to get some hazy views. I had a bite of my macaroon bar, and another drink, and started the walk back to the bike (via the cairn on the North side of the ridge). The walk down from the summit ridge starts fairly shallow, but from around 850m down to 650m, it's very steep, down a peaty path (still better than the loose rock!) although by now, I was getting some stunning views across Glen Ey, and across to the summit of Carn Bhac. 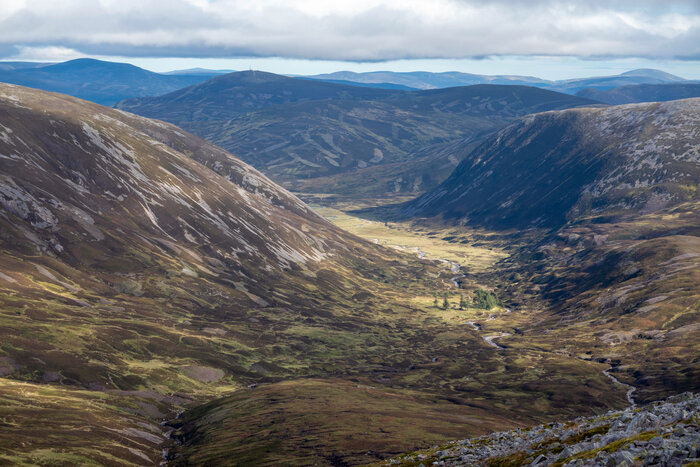 At the bottom of the steep section however, I managed to lose the path, so a lot of heather bashing later, I managed to pick up a track that led me over to the Ey Burn for a fairly easy crossing, and then I was back onto part of the track I was on earlier before the ascent up to Carn Bhac. And so, 9.5 miles / 4h 20mins after leaving my bike, I returned back to it, where I took a wee breather to drink some more fluids, and faff around with my bike lock again.

The ride back felt quicker and easier than the ride in. It had started to drizzle just as i set off, but that only lasted around 10mins and I didn't bother stopping to put more layers on. Again, it felt fairly flat apart from a few small inclines/declines, apart from the final mile where it was mostly downhill to Inverey. Total time for the ride out 35mins, and my total time car-to-car was 5h 54mins - way quicker than I estimated.

A nice wee day out on the hills, despite the cloud cover, and I'd definitely fancy a ride through beautiful Glen Ey again.