R.S Thomas described an autumn scene as 'something to wear against the heart in the long cold'. I've always liked that idea of autumn being winter's last memory of summer and as I set out from home the dark reminded me of winter's nearness.
Parking by the beach at Golspie a rich orange glow over the water heralded the sun that rose clear, briefly, before being swallowed by the clouds that would linger for most of the day. 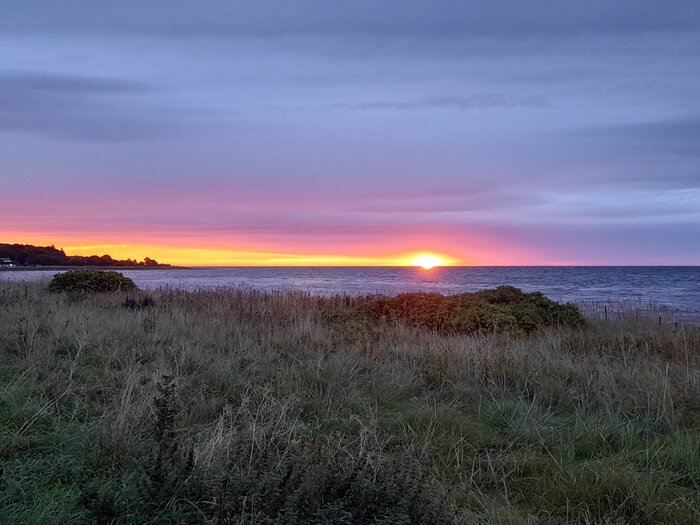 I'd determined to do this longer stage of the trail in a 'oner' rather than split over several mornings like other parts I've done. There's no right or wrong way of course, maybe I felt like more of a challenge!
Along the sands of Golspie I went. The golden colour still vibrant on a morning that grew light only with reluctance. 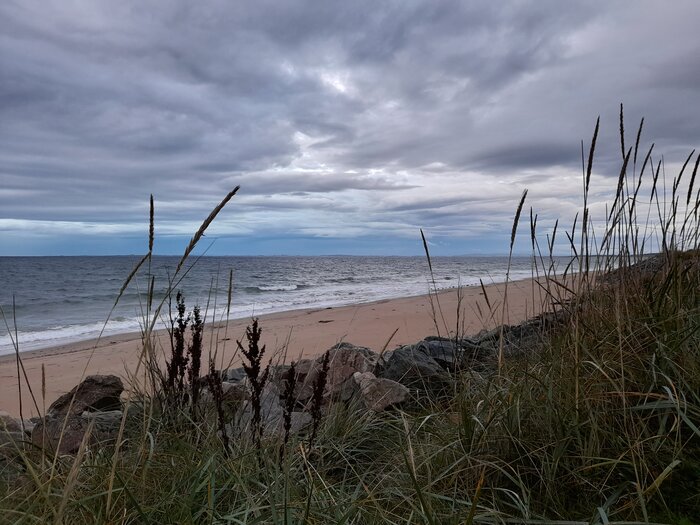 A couple of green keepers were at work and as the trail skirts the edge of the links course I caught their fine Sutherland accents. The 'Mannie' gazed down on us in lordly fashion from the top of Ben Bhraggie. (This is a good time to walk up there on the way to Ben Lundie if you want to hear the roaring stags.) Golspie is a fine village that can now contentedly live under the gaze, but certainly not under the shadow, of that infamous landlord. If he stands in anything then it's his own infamy.
I turned inland near the Golspie go-karting track and then briefly followed a quiet road before Balblair Woods welcomed me in. Another place I've never been (thank you trail!) and with a good path it was a pleasant stroll. The odd songbird gave music to the scene but more noticeable was the cacophony coming from beyond the silent trees. A short detour revealed a stubble field with maybe two hundred pink foot geese! 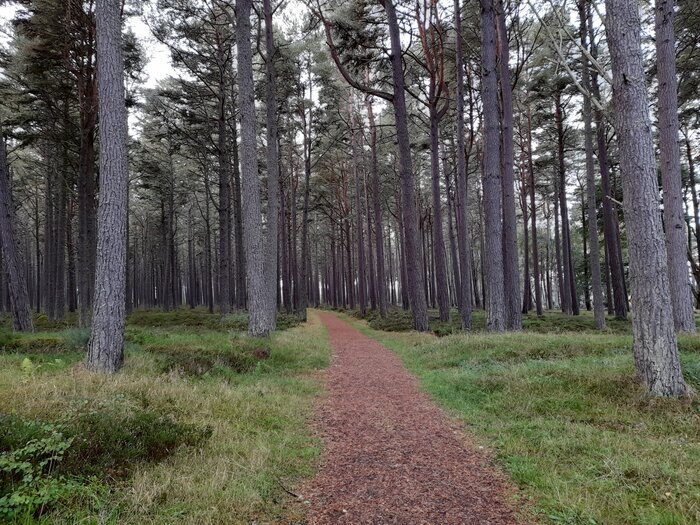 From the trees I then took a farm road towards the A9 at Kirkton. The southbound train had recently rattled over the level crossing and just past it I took to the fields. A section of the route makes use of farmland in order to avoid the A9. Partly grass - partly stubble, the walking was never bad but after rains I guess it would likely get muddy. The bails of straw were another reminder that the wheel of the year was turning. 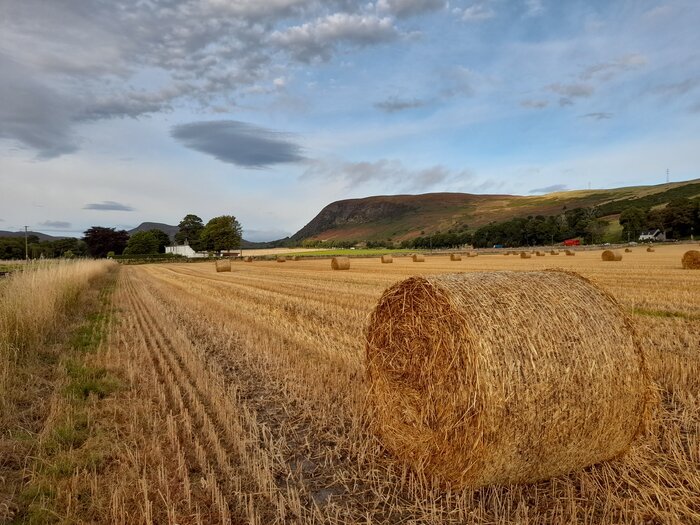 Approaching another mixed woodland the terrain did get a bit rougher but a path made it's way through the trees that here and there had white paint marks daubed on them. Secret markers of a pagan processional? Sadly not, just reminders of the days of the JoG trails infancy.
The traffic noise reminded me I'd soon be on the A9 for a bit as I crossed Loch Fleet at The Mound. I paused first to taste some of the plentiful blackberries that were growing wild. They were lovely, as Seamus Heaney says, 'summer's blood was in it.'
The berries were plentiful along the A9 and so was the traffic. The verge however was wide enough and at times I walked inside the barrier. A car whizzed past me on the wrong side (overtaking) at about 70 or 80 mph. Thanks for that!!
The view of Loch Fleet loses nothing for having been seen so often. I must have driven this hundreds of times but never walked it. 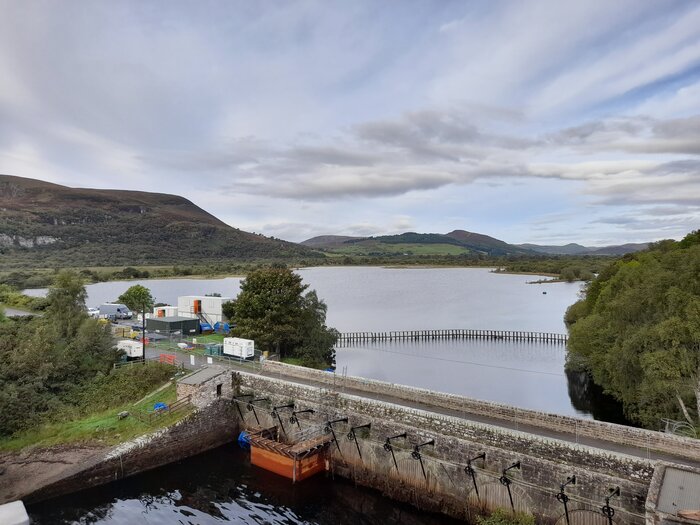 At the waymarked point I crossed the barrier down to the edge of Loch Fleet. This was the most difficult terrain of the day. A short, but quite steep, descent overgrown with thorny vegetation. I paused to unhook my coat and made it on to the flat tidal edge of the loch without scratches. Maybe there's an easier way and I just missed it!
I did miss the way in to the trees that run near the A9 on a decent wee path. Instead I walked the grassy flats and admired the heron-priested loch below a sky that slowly was brightening. This stage of the trail is a good way of realising how much of an impediment Loch Fleet once was to the traveller of old. Impediment: seems such an unkind word for this lovely place. 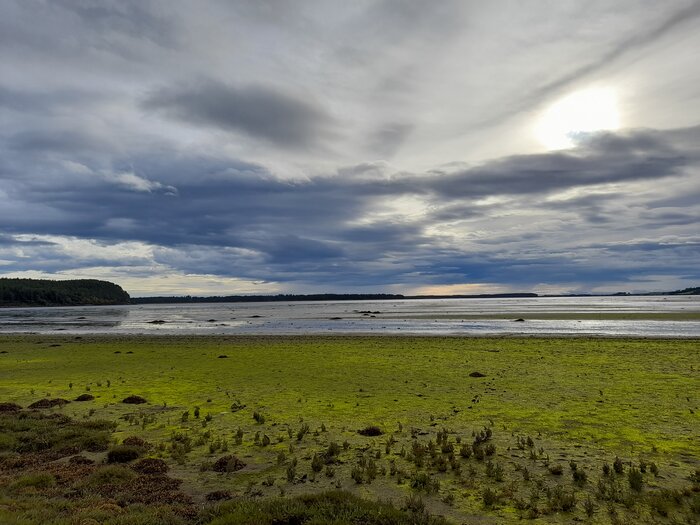 Near Gatehouse I joined the minor road that runs along the water by the old railway route. The line closed in 1960 but at times its route was easy to make out.
The road along here had some traffic, never much, and I made good going for a bit. Walking in the north means the day is as long as it needs to be. My one constraint was the need to catch the bus at Dornoch at 3.20p.m but there was time for a break on one of the big boulders by the shore and to look back on some of the days travel.
Fed and watered I picked up the road once more and pressed on until the ruins of Skelbo Castle came in to view. Seals were calling mournfully from rocks just offshore, tourists were admiring them. That age-old philosophical question: who is watching who?
A little further I noticed an old railway bridge reverting to an older mode of transport: I took a private farm track for a short distance where a well-marked point showed me where to cross over stiles to the Coul links. I think a massive golf course is planned for here or nearby. Forthcoming years may put considerable pressure on the north to provide 'nature' for those from further afield.
I pretty much followed the old railway route for the next part. An occasional reminder presented itself: 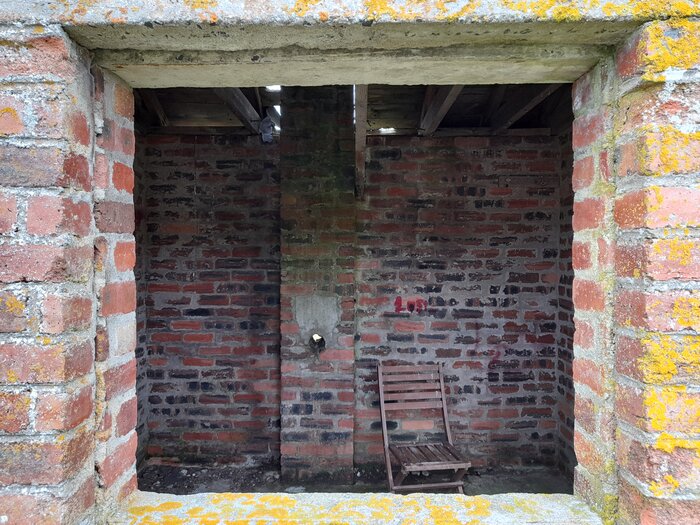 Embo, laid out on its wee grid was my next stopping point. Time was on my side and I wandered through its streets, then through the holiday park, to the shore. I took the rest of my piece here and got the flask out. Two breaks! I mind climbing Snowdon once on just two Freddos and a flask!
A few holidaymakers were about and other than the Golspie greenkeepers, two dog walkers at Balblair and the seal watchers they were the first people I'd met. This stage however never gave the sense of solitude that sections further north have. The road walking I suppose. 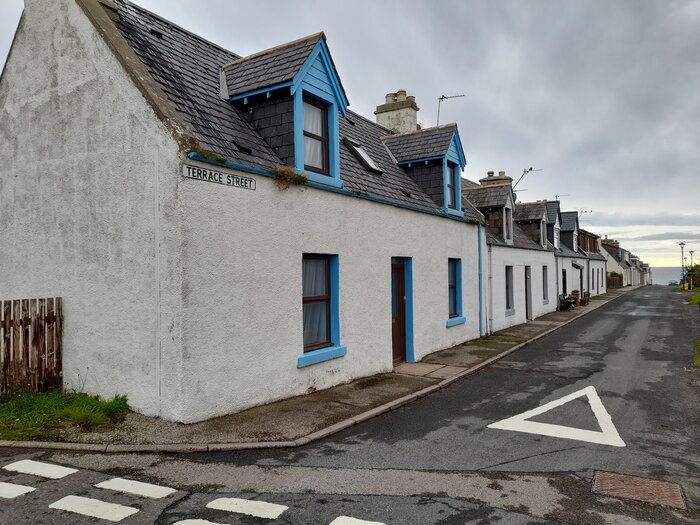 From Embo a good track sets off to Dornoch. Not long after I took it a brief shower caught me, the only rain all day. A detour left led to the shore where there seemed two options: beach or path along the golf course. There were plenty golfers so I walked the sands. Mind you if they're paying that much to play they must be good so perhaps it's safe enough!
The sand was soft so I walked the waters edge. Close offshore young solans (gannets) were diving, piercing the grey water with flashes of white. Even now there was an evening feel to the light. Dornoch of course was busier and I followed the signs that are marked with John o'Groats Trail to the Square. A slightly different route from the map on this website but I don't suppose it makes much difference. It did however take me past the stone that marks the last burning of a witch. Well tomorrow would be October....

Another enjoyable read, I occasionally nip up the A9 with work past these areas but it'd be nice to stop and walk some of the sections on a day off sometime soon!!

gld73 wrote:Another enjoyable read, I occasionally nip up the A9 with work past these areas but it'd be nice to stop and walk some of the sections on a day off sometime soon!!

Thank you. For a few years I had the same experience in the other direction!