Kamikaze pheasants and an easy three at Glen Shee

Kamikaze pheasants and an easy three at Glen Shee


Checking the forecast for Sunday left me feeling less than keen on the west highlands, so instead decided to head east and pick off the three munros at the Glenshee ski centre. I'd done the six the other side of the glen a couple of years ago and really enjoyed them. Aosda and Carnwell don't get a good press and so 'till now I'd been put off. But the thought of ticking three off the list with little effort and getting me ever closer to a ton was the draw for me. Would probably take me longer to drive there and back than do the circuit itself

The trip up to Glenshee itself was going ok until I left the A9 heading for Blairgowrie and the ski centre. From then on it was an obstacal course of perhaps the dimmest creatures about - pheasants

There were a number of near misses as I headed to the hills - lucky I don't much like the taste of the birds, else I'd have tried harder to connect with a few of them. Repeat the game on the way home (no pun intended!).

Anyway, back to the hills.

(at that point). So a quick buttie and coffee and that's me heading up under the ski tow to Aosda. 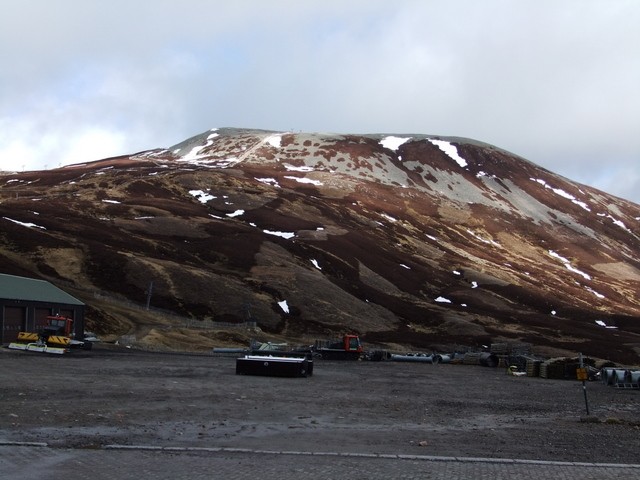 Aosda from the car park Ok, not the best route I've ever done

It's true, this isn't a great route up a hill, but some of the views back were consolation for that View back from ascent up Aosda

Soon as anything I was on the summit. The easiest munro bagged ever. My next destination was Carn a'Gheoidh, via a detour down to the shore of Loch Vrotachan. From this point on the walk took on a different complexion as the ski centre was left behind (Personally I don't have a problem with ski developments, despite the carnage on the Cairnwell

but it was good to get back to that wilderness feeling

).
Even managed a bit of wildlife, with plenty of sightings of mountain hare on route More hares than on my head!!

My weather for the day had pretty much settled in by now - and was a mixture of sunshine, showers, snow, mist, wind and if I was really lucky all at the same time. The good thing was that with a strengthening wind any cloud/mist and rain/snow didn't last for long. View on route to Carn a'Gheoidh

At the summit the views were even better, with good views of Glas Tulaichean and Carn an Righ

Now it was just the Cairnwell to go. The trip back was a good little walk. Broken cloud and sunshine in front and a dirty black cloud ready to dump snow on me chasing upo from behind. Resigned, I let the cloud do its worst. Which lassted all of five minutes before the sun came back out again and dried me off. And it's good views all the way. No picture can capture what a mess the bulldozed track or crud on the summit look like. And it's such a shame, as the views on the way up and from the top are great (if you can see through the communication masts, etc that is View near top of Cairnwell

From the summit it was a quick trip down underneath the chairlift. A bit steep at the start, but all down in a matter of a few minutes, with good views on the way Last view of the day

All in all a good little route, despite the horror show on the Cairnwell. The walking was good, especially to and from Carn a'Gheoidh, and the views from all of the summits were great.

Great report PeteR, I'm glad you posted this as I had virtually given up on these three but perhaps I was a little hasty, looks like some great views in places but I'm with you on the cairnwell summit .....wtf

ChrisW wrote:Great report PeteR, I'm glad you posted this as I had virtually given up on these three but perhaps I was a little hasty, looks like some great views in places but I'm with you on the cairnwell summit .....wtf

Thanks Chris. I was like you, as I had heard so much negative about these hills I wasn't that keen to go do them. And the Cairnwell has been butchered

But I like to think that even the worst us humans can do can't rip the heart out of these hills. We've had a damn good go here though, but viewed from a distance even the Cairnwell looks good, so it still has a heart beating in it in my book.

I think I got some good weather on the day, even with it being so changeable. The views were great - just my photos never do the views justice.

This actually turns into a nice walk after you leave Carn Aosda and The Cairnwell behind. Especially if you continue to Carn Bhinnein. Looks like you got a decent day for views as well.