Grahams included on this walk: Oireabhal


Yes, Harris's smallest and (probably) easiest Graham is indeed pronounced something like "Orville" ... which I suppose does make me Keith Harris, then

.
After a great but knackering walk a couple of days earlier on the An Cliseam horseshoe, I was keen to get a second walk in before having to leave the Western Isles, but I didn't really feel up to either of the two higher and somewhat more challenging Grahams, Uisgneabhal Mor or Tiorga Mor. Ah well, the Green Duck it was to be, then

.... Actually, though, this turned out to be a very rewarding circuit, and definitely not an inferior option to either of the other Grahams

.
Parking at the start of the route (the hydro track that starts off the B887 at the outflow from Lochan Beag) can be problematic, but there is a good, small parking area just a bit further east along the road, just north of the tiny Loch an Caor. This parking area also has the advantage that it sits directly below Cleiseabhal, at the southern end of the Oireabhal ridge, making for a carefree descent and avoiding a tiresome road walk at the end of the day.
This was the view from the Loch an Caor parking area down to the start of the route at the Lochan Beag track: As the track heads northwards up Gleann Chliostair to the northern end of the Oireabhal ridge, it passes no less than four lochs: first the diminutive Lochan Beag, then Loch Leosaid, with the sizeable Loch Chliostair being third up, and finally the smaller, higher Loch Aiseabhat.
Loch Leosaid at the start of the route, with Oireabhal still firmly in the Clag at this stage of the day Somewhat to my surprise, I was passed by a chap on an electric bike heading downhill on the path at the side of Loch Chliostair. He stopped to pass the time of day - it turns out that he is employed by the local estate to count mountain hares and other wildlife. Apparently they qualify for a government grant of some sort if they maintain a big area of wild land with sufficient biodiversity of birds and mammals, hence the need for the hare count. All very interesting, and it really sounded like an enviable job, although you'd definitely have to be fit. His electric bike looked like fun, too.
Up at Loch Aiseabhat now: From the northern end of Loch Aiseabhat, where the proper climbing starts, I got a tantalizing glimpse of Sron Uladal, the scarily craggy northern end of the Oireabhal ridge, billed on the website as "some of the most impressive cliffs in the UK", no less. Given that the Clag was still quite low at this point, I didn't go any further north in search of a better view. The ongoing route, as described well in Richard Barrett's Cicerone guide to "Walking on Harris & Lewis", now makes an easy ascent of Muladal, which is Oireabhal's northernmost outlier. This was the view back down to Loch Aiseabhat on ascent: Muladal wasn't the most exciting of hills, particularly in Clag, but nil desperandum: things get steadily more interesting from here on in.
Muladal's summit environs: plenty of boulders, anyway. As I got to the bealach between Muladal and the altogether more interesting peak to its south, Ulabhal, the Clag started to lift and I got a nice view back over Muladal, with the substantial Creagan Leathan crags of Tiorga Mor being very prominent on the west side of Gleann Chliostair: Although the ongoing route was straightforward enough, Ulabhal turned out to be a much rockier and altogether more interesting beast then Muladal, even if its summit cairn was still deep in the Clag when I got there. As I descended southwards towards the bealach with Oireabhal itself, I picked up a bit of a path, although the route down the well-defined ridge is clear enough anyway. At the bealach itself, there was a very nice wee rock castle, with the rather dramatic crags of the Cathadail an Ear corrie dropping precipitously into Gleann Mhiabhaig to the east: Closer to the rock castle now, and it was looking a wee bit intimidating: Although it would be possible to bypass the rock castle, the path actually goes right over the top of the thing, and it actually turns out to be great fun: much easier than it looks, and definitely not difficult scrambling by any means. This was the view from the top, with the Clag definitely starting to lift now, and Uisgneabhal Mor looking well craggy off to the east on the other side of Gleann Mhiabhaig: 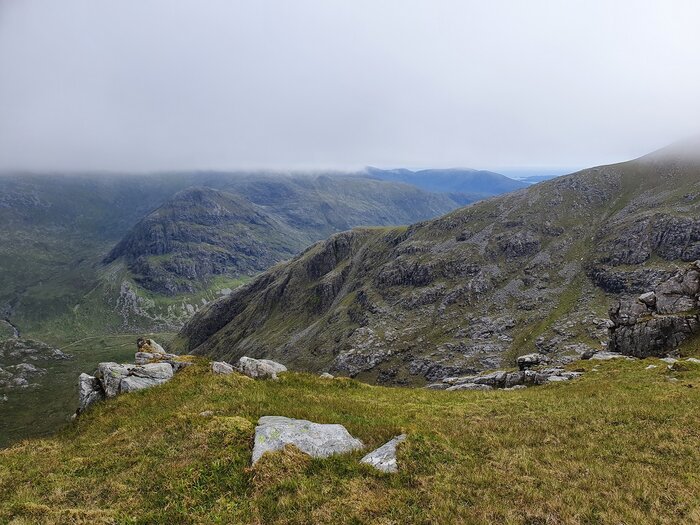 From here, it's a straighforward ascent to the main Graham summit on Oireabhal. To my delight, the Clag suddenly lifted completely just as I reached the cairn: truly one of those fanfare moments, with a huge maritime view opening up to the south Oireabhal's summit environs sport a total of three cairns: I think that first one was the true summit, but this smaller one probably has a better view, looking over the two Sodhaig islands and the bigger island of Taransay in the distance, towards the famous Luskentyre Beach on South Harris: The route heads on southwards along the ridge, over a minor bump named as Bidigidh on the OS Landranger map, towards the more impressive outlier Cleiseabhal at the southern end of the ridge. This was the view of Cleiseabhal and Luskentyre Beach on descent: Another grand view to the south-west across Gleann Mhiabhaig - and is that Skye away in the distance? The highest of Harris's three Grahams, Uisgneabhal Mor, still had its head just in the Clag over to the east: Looking to the south-west, there was an impressive view of Tiorga Mor, the third Harris Graham and a particularly rocky wee beast, briefly lifting its head out of the Clag: Down at the bealach with Cleiseabhal, and the ongoing route was clearly going to involve another short scrambly section up a rock band on Cleiseabhal's northern flanks: 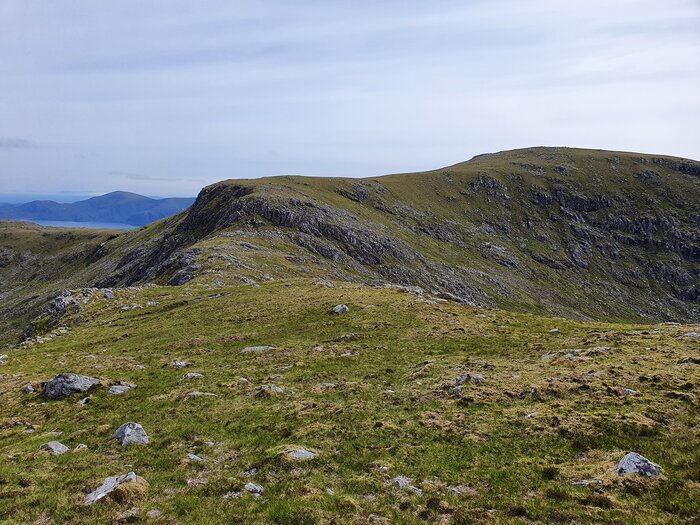 The path finds an easy enough way up through this, however, and again it turns out to be much more straightforward than it looks from a distance.
Soon enough, I was up at Cleiseabhal's extremely scenic summit trig point. Luskentyre Beach was looking truly glorious from this angle: Some interesting Orville the Duck trivia, as gleaned from Wikipedia:
- He is of course named after Orville Wright of the Wright Brothers (since he doesn't know how to fly, geddit !???!!!)
- His single "I Wish I Could Fly [Right Up to the Sky, But I Can't]" reached Number 4 in the UK Singles chart in January 1983, shifting more than 400,000 copies in the process
- He was played by Matt Lucas in an episode of Little Britain, as an out-of-work actor, with his voice having broken by now and altogether less cute, although still basically a Big Green Duck
- After Keith Harris's death in 2015, the Orville puppet - insured for something in excess of £100K - was donated to the Grand Order of Water Rats Museum.
Bet you wish you'd never asked.
Anyway, here's the obligatory shot of Keith Harris with Oireabhall: And a final grand vista over Taransay and Luskentyre Beach on descent to the parking area, with the Sodhaig islands and a fish farm prominent in the foreground: A truly lovely ridge, this - please don't be put off by my usual painful puns