Back in 2012, my first visit to Quinag was a Rite of Passage for me, at least in the subject of Corbetts. They are always harder to multi-bag than Munros, considering they must have at least 500ft of reascent. 7 Munros in a single day? Can be done (South Glen Shiel)! 7 Corbetts? Ehmm...

Well, I never managed to bag more than 3 Corbetts in a single expedition, but these days it is less about the actual bagging but more about the ADVENTURE. I'm not really sure what I'm looking for every time I set off to climb my next hill. Is hillwalking about proving to the whole world that I can do it? Is it a way of testing my limits? Or just having fun?...

For our second visit to Quinag it was going to be FUN. I just knew it. Weather looked promising and on such a complex mountain, it would be hard not to enjoy the ridge walk!

We followed the usual route over the three Corbetts, starting from Spidean Coinich, finishing on Sail Gharbh:

Track_QUINAG 15.2KM.gpx Open full screen  NB: Walkhighlands is not responsible for the accuracy of gpx files in users posts
I have always been interested in the story of the doomed Franklin expedition, but having just read "The Terror" by Dan Simmons (the TV series based on the book is very good as well!) I was in the mood of finding the north-west passage! Quinag was definitely the right mountain to look for it - we were in the very north-west corner of Scotland

We decided we'd go up the closest Corbett, Spidean Coinich, first, then traverse the ridge to Sail Gorm. I set off first, looking for a path but as the slope is very rocky, all I found was a line of flat slabs. Easy to follow. That's a good lead!
Because I was the one finding the leads, I had to be the ice-master of this expedition

I had nothing against it, as Mr Blanky the Ice Master is my favourite character from the book! A bit too early for ice, but a certain ruined castle emerged from the mist...

Kevin kept stopping every 10 minutes to take yet another panorama...

The final climb to Spidean Coinich was steep-ish and rocky but an obvious path reappeared:

Starting from the height of 250m, it didn't take us long to reach the summit. It is possible to take in some optional scrambling but the passage is easy enough to find: A bit rocky... Hazy Suilven and Canisp in the background

Resting on the summit of the first Corbett, I wondered which character from the Terror would compare to Lucy, and decided she has to be the mischievous Mr Hickey, because she always hitch-hikes on my rucksack. Baaad Sheep!

Blanky and Hickey still on the same team...

In the meantime, Kevin was examining the surrounding landscape (looking for the passage, obviously):

After a short break on the first summit, we continued to the first intermediate top (714m). The initial descent is very eroded, but since Quinag is such a popular hill, we found paths nearly everywhere: Breathtaking views in every direction... This mountain keeps on giving! Mr Hickey hitched the ride again!!! Heading for the next top (another unnamed one): 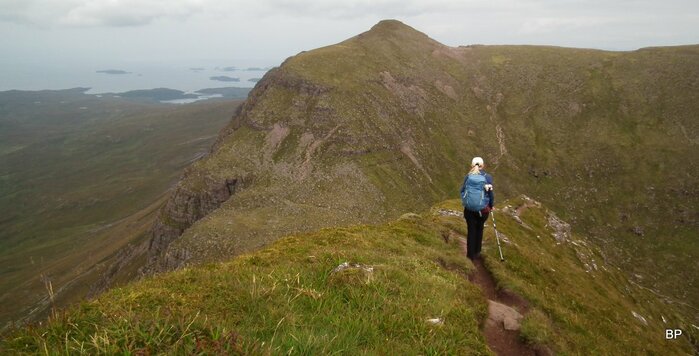 Looking back at the 714m top from Bealach a'Chornaidh, the descent path visible to the left: 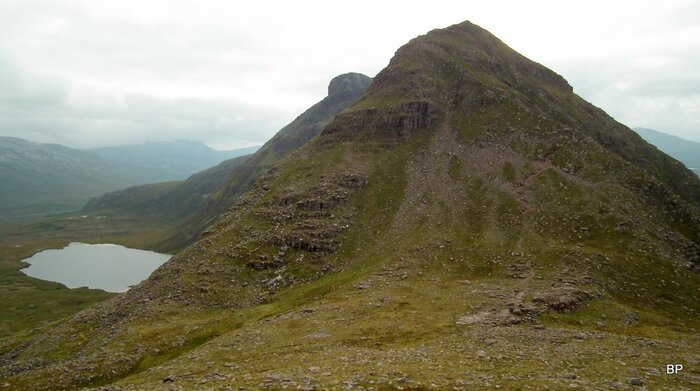 By the time we hauled ourselves up to the middle top, high cloud has arrived and the landscape around us turned grey. It didn't intimidate Kevin though. He is rarely intimidated by anything. Obviously, he's the captain of the expedition He Who Always Knows It All Best posing with Spidean Coinich

From the middle top, we could now see the ridge running to Sail Ghorm. So much more delicious ridge walking still to come! I was meowing with delight!

To get to the northernmost Corbett, we still had to negotiate two additional intermediate tops (one can be contoured around with only minor scrambling). But we simply couldn't skip the famous posing plynth on the first bealach:

The captain is looking for the passage

The western cliffs of Quinag are vertical here and I doubt there is an alternative route to this mountain from the west, unless you are a rock climber: All that posing on the edge of the void was fun, but I was eager to push on to the second Corbett! The next stage (the path contours the eastern slopes below the summit of the 687m top) contains the only unavoidable minor scrambling if you stick to the path. I'd hardly call it scrambling though, just a few big steps. They can be negotiated either applying the bum-shuffling method... ...or the pole-vaulting technique also known as Kevin's special move The "bad step" behind us, we could now see the rest of the way to Sail Ghorm - a delightful wander along the wide ridge: Could this be the passage? Doesn't look convincing... The Quinag complex is definitely one of the most picturesque mountains in the north of Scotland. So many superb spots to practice photography. We didn't have the bonus of blue sky, but even with some grey background, the ridge still looks spectacular: The Captain claims the second summit: Corbett no. 130! And that without taking a single step myself! I'm a Baaaad Sheep!

We took a longer break on the second summit, enjoying our sandwiches (no lead-contaminated tins, thankfully) and gazing in the far distance. Looking NW from Sail Ghorm, all we could see was just water, water and more water (the sea, the sea, the open sea). Isn't that what the north west passage was about? Finding the open sea on the other side?

To continue the traverse, we retraced our steps to the middle top (over the bad step which was hardly a problem when tackled uphill) and headed east to the last Corbett of the day.
On the way to Sail Gharbh: The climb to Sail Gharbh is bouldery and the path presents an advanced stage of erosion, but there are advantages, too. Like the views back to the ridge we walked earlier:

Sail Ghorm and the minor tops

The summit of Sail Gharbh was busy with walkers, several large groups resting on the ridge close to the top. We managed to grab the spot by the trig point if only for a short time. I found the passage! Yuppieeee! And I bagged my 131st Corbett!

The descent path was not as badly eroded as I recalled from 10 years ago (maybe it had been upgraded since our previous visit, we actually saw workers repairing the lower reaches of the path today). It didn't take us long to drop to the lochan, passing some fantastic scenery...
Views from the descent path - breathtaking from every vantage point! Almost back to the car park, the expedition is over, but there will be more days out. And other passages to discover!

In the meantime, onboard the HMS Terror... As for Hickey and Blanky, their journey in the north-west will continue in my next story, this time on another famous far north Corbett. TR in progress.

Another good one, BP - looks familiar 😉 This is one set of hills I definitely plan to revisit - just wish I was as close to them as you are ! - cheers

rockhopper wrote:Another good one, BP - looks familiar 😉 This is one set of hills I definitely plan to revisit - just wish I was as close to them as you are ! - cheers

Thanks, RH, agree Quinag is not a mountain to visit only once, just as other Assynt hills. We are currently doing a second round of the Assynt/Coigach/Sutherland mountains (Munros, Corbetts and Grahams). Still some great hills to revisit: Foinaven and Suilven on top of the list. Kevin is injured at the moment so not much we can do for a few more weeks, but can hardly wait for winter conditions