Well in natures eyes spring has finally sprung & what a great time of the year to be fit enough to get back out in the hills. After weeks of recovering from an operation I was fit enough to tackle the one that stopped me from achieving my goal of 10 Munros for 2010 (which was not bad going I thought, considering I only started walking them at 2 ½ month prior) ‘Mount Keen’.

Both myself & Jockstar were to say the least keen (pardon the pun!)

to reach the top of Mount Keen as it was the last one we attempted on old years day to try to get me my 10th for the year. But alas like so many of us out there the snow deterred me and it was a case of so near yet so far!

This time we were going to get to see the Cairn…..

We were both itching to get out again (many thanks to Jockstar for being so patient and getting me back to fitness level to be able to get out in the hills again, it’s great to have a great partner in life and also a walking partner that like so many of you out there understands your own levels you are able to achieve).

We set off from Invermark car park about 1:45pm and headed over the bridge and passed the quaint little church onto the road heading to Mount Keen. When we reached the big metal gate that takes you into the Glen where we had our first sight of spring. In a large puddle in the middle of the gate entrance Jockstar spotted a large patch of tadpoles (natures is so wonderful). Friendly birds at the carpark We carried on up the path, to finally reach the open Glen views.

As always with nature the same views can look so different in different seasons. Spectacular! We both could remember the snow covered Glen of a few months before. Suowfar with views of the glen We think this was a Salmon catcher in the burn for conservation purposes, hopefully our thoughts were right! Along the way we met Mr Toad (think he was a Toad, due to his size and colour!). He posed for us to take a few photos, then we left him in peace and went on our way. Cute wee little fella. Finally we reached Queen’s Well and took a rest to admire the views and a few photo opportunities, stunning monument! Onwards and upwards across Easter Burn (thank God for gaiters and waterproof boots as the stones were low and the water was above most of them!). We reached Ladder Burn and the Iron Grid to cross was just above the water, so no problems here apart from the time we took for more photo opportunities! It was then we reached the Ladder Glen….OMG this is the point of return on our last attempt due to the Ice and snow.

But looking up now it was a great sight, no snow at all in sight, so the way ahead was looking good and there was no way be were going to be beaten by this Munro again!! After he many zigs and zags of the path we had not yet seen yet we finally reached the open Moorland above. Where we met a couple on their first Munro (Sonja and Les) after discussing Munros and passing on the WH website details to them we watched them as they made their way back down at quick pace. Fantastic open views hit us as we reached the Moorland, the sun was shining and we were faced with great views for miles. The sound of Grouse in the distance was lovely to hear, until they kept flying out of the heathers as we walked up, what a fright they give you when the fly out of the Heathers right in front of you, way too quick to catch on camera! We stopped at the fork in the path for more photos of the stunning views. Taking the path to the right and walking up a stepped path made out of large stones we soon reached the Cairn. Steps on the way upto the cairn, but where is the scramble!!!!! 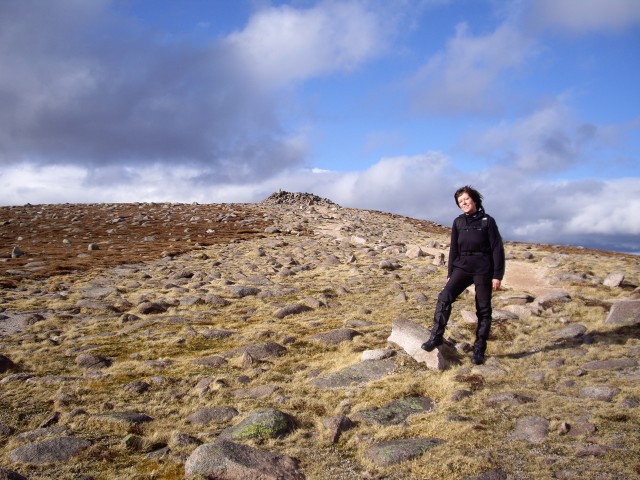 Yippee Munro No 10 in sight for Suhowfar

Yippee, what a feeling finally on the second attempt we bagged it! Rolls, crisps and chocolate devoured we headed back down. The climb down is so much easier as usual, apart from the odd fright of a flying Grouse across us. Grouse ready to fly away...

Finally we reached the car park and headed home for a wee drink to celebrate and a fish supper. End to a perfect day. Well nearly!!!

Who made the licensing laws for supermarkets to stop selling alcohol at 10pm!!

Both of us being totally shattered forgot the time and standing at the scanner machine in the supermarket at 10:04pm the machine would not let us scan alcoholic drink…..dam it! (or words to that effect were uttered!!)

. They were left in the shop and we relied on the reserve store at home to enjoy a wee tipple to celebrate with our supper

So in all totally fantastic Spring walking day with nature, Munro number 10 bagged for me and 27th for Jockstar, great sunshine views and a wee celebration after. Great day had by both. And finally Mount Keen Cairn was seen by us!!! No 1 for this year with many, many more mapped out already. Was nice in the east wasn't it?

So glad you guys made this one. It's my fave hill and has so much going for it.

Mind lass.... Always... always... have the squiffy in for after a hard day

Oh trust me MW loads always in at home, but we were worried for Sundays supplies too, Bri likes the beer well chilled

Yeah we passed you both setting up camp just next to the burn! Pity we wish we had known it was you, we would have come over and said Hi. It was about 7:15pm. Hope you had a great night camping. Views were still great of the hills then

suhowfar wrote:Oh trust me MW loads always in at home, but we were worried for Sundays supplies too, Bri likes the beer well chilled

Yeah and supper seems so much better with beer!!

Know why one of your favs, stunning views & we were lucky enough to get a real clear day with sunshine too!!

suhowfar wrote:Yeah and supper seems so much better with beer!!

Know why one of your favs, stunning views & we were lucky enough to get a real clear day with sunshine too!!

I had a bonnie day too. But this wonderful walk has Charisma eh...

I cana wait to do the long version

Nicely put together Su and what you didn't mention was the pace you set on the walk......i was just hanging onto your coat tails !!

Great to be out again and ready for some more..

, but if you only knew, I was really secretly trying to run away from the toad!!

!!!!! Looking forward to a week of walking and bagging many more Munros with you in a couple of weeks time, lets start planning for our next 12.

Looks like you both had a few good days away walking and staying in the caravan. Pity the weather stopped you doing your walk (the White Hackle Challenge) on behalf of the troops in Afghanistan.

Can see why you want to do the long version walk for Mount Keen, looks like there are some splendid views to be taken in arond the pinewoods of Glen Tanar. Looks like Brian and myself may have to visit Mount Keen at some point in the future via the long route, but so many others to visit before then!!

We are planning to bag 12 more by the end of April, so no pressure there eh!!

"The sound of Grouse in the distance was lovely to hear, until they kept flying out of the heathers as we walked up, what a fright they give you when the fly out of the Heathers right in front of you"