The hills of the far north (like Arkle) taste best in autumn. Some routes might be too long for shorter days but nothing compares to a nice ridge walked in September colours

Weather is more likely to be capricious though but as we experienced during our recent visits to the north-west, it pays to be patient. Starting on a cloudy morning doesn't necessary mean the whole day will be rubbish.

The memories of Quinag were still fresh in our memory and we didn't mind returning to the area. Arkle was high on our list of hills to revisit (the second round of Assynt/Sutherland peaks), not to mention that Lucy (now known as the Mischievous Mr Hickey) hasn't done it yet. Hillwalking with a small fluffy lamb attached to my rucksack has caused a few odd looks and an occasional comment from fellow hillgoers, but I don't give a *&^%. At least I'm easy to recognize

The ridge of Arkle is almost exclusively climbed from Achfary (south end of Loch Stack). The small car park here is almost always full on weekend days so we were quite surprised when we arrived to see only one car. Maybe it was due to the rainy morning; we sat in the car for 15 minutes waiting for the rain to pass. It did eventually and the cloud started to lift, which have us hopes for reasonable weather later on.

We followed the WH route on the way up, when descending, we took a slight detour along the edge of the mighty western cliffs of Arkle (there's a faint path and the views are well worth the extra effort).

Track_ARKLE 18.7KM.gpx Open full screen  NB: Walkhighlands is not responsible for the accuracy of gpx files in users posts
As it was yet another hill in the north-west, I was Mr Blanky again (though in the photo below I look more like Miss Wet Blanket Loch Stack and Arkle still shaking off the morning mist:

Is this lead wide enough? The gate to Arkle is open!

We found it difficult to explain to Mr Hickey, that all mushrooms are edible, but some of them only once... Having crossed the small pine plantation known as Ked Forest, we indeed plucked out a few keds and waved away a small cloud of midges, but as soon as we hit the steeper section, a nice breeze chased them all away. Mr Hickey, of course, took the best spot for the ride... The track goes all the way up Bealach Horn but we left it as soon as possible to follow Allt na Dige Moire up the slopes of Meall Aonghais:

Since our previous visit in 2014 a path has appeared along the stream. Arkle is becoming more and more popular these days!

The rocky slope on the horizon is not the summit, just the southern top (758m)

Mr Hickey tried to fit into every photo (Foinaven in the background): On the flatter shoulder between Meall Aonghais and the southern top of Arkle we spied a family of 6 ptarmigan, probably mum and dad with four offspring. They looked well fed and happy. Plenty of heather to feast on, I guess. The final climb to the southern top is very stony but not too steep:

An intriguing gap in the cliffs, Lochan an Faoileige to the right, above the lochan Meall Horn still covered in cloud:

Panoramic shot from just below the 758m top, the cloud slowly lifting off Foinaven and Meall Horn:

Foinaven (right) and the true summit of Arkle (left) from the southern top: From the S top, the ridge is easy to follow though the path is eroded. Mr Blanky took the lead again! The wobbly descent to the bealach was less than 100m and soon we were hopping up the final slopes to the summit ridge proper: Having reached the ridge, we couldn't wait to get to the narrow section:

Not exactly knife-edge but it is pretty exposed and in winter conditions or extremely wet weather this narrow section could be tricky:

There's hardly any scrambling here, just several large steps to negotiate, but we tried to squeeze out as much fun as possible:

Kevin on the "pavement" part of the ridge: ...and on the summit with Lucy: Just as we reached the summit cairn, weather suddenly improved and we were gifted with some sunshine - well deserved!
We took our rucksacks and continued past the cairn for another 100m or so till we got to the end of the ridge. This was as far west as we could go today. Views from the end of the ridge were spectacular!

Foinaven in its full glory!

Corrie Am Bathaich and the S top of Arkle, with Meall Horn and Ben Hope on the horizon:

The world of water to the west of Arkle ridge: We had a quick lunch and wandered around for a while, taking more photos and enjoying the clear views. Several other groups of walkers were on the ridge now, following us to the summit, so we decided it was time to go back - the mountain was getting busy!
Heading back to the entertaining part of the ridge: We retraced our steps along the narrow, rocky crest and down to the first bealach, but Kevin was reluctant to stick to the WH route, he wanted to go a bit off-piste. Dropping into Coir Uairidh seemed like a plausible option, but it looked too steep to my taste so I suggested returning to the S top and following the edge of the cliffs for some big-drop-below-us pictures. Kevin liked the idea. For once, I won the "which path?" argument

Arkle and Ben Stack from the S top:

Our descent line followed the edge of the cliffs as closely as possible. Weather still held an we enjoyed some nice sunshine. The last rays of warm summer sun, before the October rains and "the flying bin days" come along... The big drops can be scary... if you get too close! 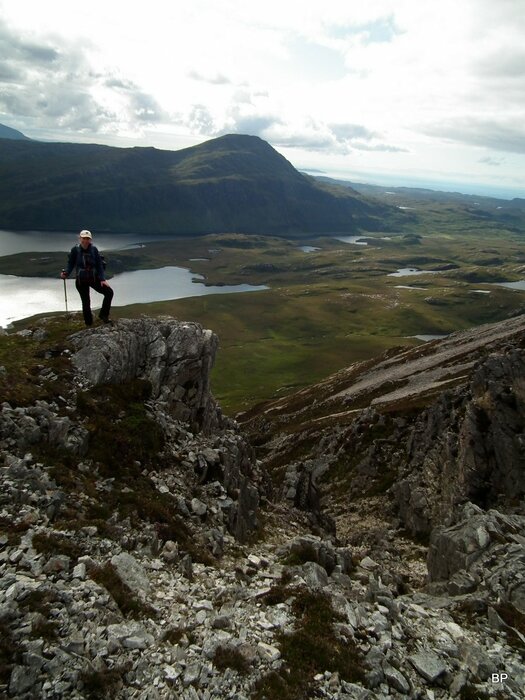 Walking down the easier section, Loch Stack to the right: Looking back up the white rocks of Arkle: Panoramic view of the iconic N side of Ben Stack:

I'd definitely recommend taking a detour to admire the cliffs from above - well worth it! So big you need a portrait mode to fit it in Lower down we found a boggy path descending to the stalkers track just above Ked Forest. Obviously we were not the only walkers determined to get close and familiar with the white, white cliffs of Arkle...
One final panoramic shot, with Meall Horn to the left and Loch Stack to the right:

I think we made the best out of our second visit to Arkle, at least within our non-rock climbing limits. We'd love to return to the area later this year to climb Meall Horn, maybe even in winter conditions (sounds tempting!). Another option would be to combine Meall Horn with Sabhal Bheag (a Graham). We did the latter on its own in a snow blizzard so it is due a second visit, too! And hopefully Mr Hickey will behave next time!

One more mountain story to come from me, a bit further south this time but staying in steep, scrambling climate. We actually invented a new route up a notorious Torridon Corbett! A route I will NEVER do again and neither will I recommend it to anyone!

That looked most enjoyable, BP.
Good to see what I missed

Your report makes me yearn to get up to those parts again! I did the 4 northern Munros on my holiday up there, but time didn't permit much else. I see it's true that these 'lesser' mountains in Assynt are actually more interesting, by the look of these great photos. Amazing ridges and terrain. That's a memorable walk you had..

Thanks, guys, always happy to tell another far north story

It is such a fantastic area - not a single boring hill. I'm looking forward to next year and returning to Foinaven and Suilven. Meall Horn/Sabhal Beag combo is also on the list.

We're taking it easy at the moment; Kevin has a rib injury (most likely cracked and it's very slow to heal) so we took a break from hillwalking in early October. Weather is not exactly spoiling us either... I still have stuff to post though, some very steep slopes!