At last I’ve done them! An Sgarsoch and Carn an Fhidhleir.

I’d looked at every aspect of them from other hills but they always seemed such a long way from anywhere. Which begs the question “Why choose to do them from Glen Tilt” the longest walk in of all.

I just didn’t fancy Linn of Dee on a Bank Holiday weekend nor did I relish the prospect of the long drive to Glen Feshie. So I set off from Bridge of Tilt on Saturday at about 3pm and walked, mostly in the rain, almost as far as the Bedford Memorial Bridge before pitching my tent so as to make an early start on Sunday. The weather not withstanding, I found it quite a pleasant walk: at first through the woods, with the river surging along way below and spring flowers bordering the track. Crossing the first bridge the sun came out, I took off my waterproofs and then had to stop shortly afterwards to put them back on again. 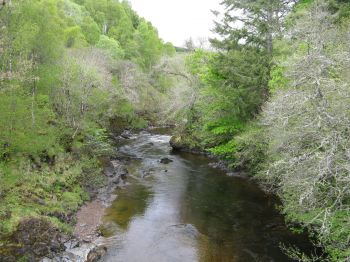 River Tilt from the bridge

I spotted this seahorse in a pile of horse poo on the path– strange what you see when you are out walking! 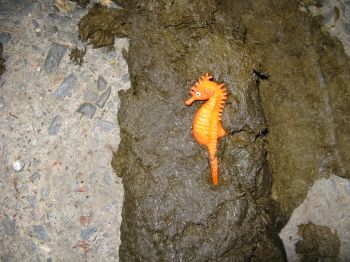 The path on the left bank of the river through the firing range was closed and loud bangs accompanied my progress as I continued on to Gilbert Bridge and then into more open ground past a farm. The next target was Marble Lodge and then across another bridge and on to the start of the path up Carn a’Chlamain. When I had done Carn a’Chalmain with my daughter late last year we had thought this was a long walk in! It is at times like this that I really miss her

– she could have carried some of the camping gear! This photo, looking up the glen towards Forest Lodge, the next landmark on the way, was taken on that occasion. 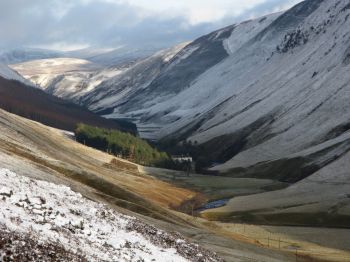 The weather on Saturday didn’t really encourage photography. Forest Lodge marks the half way point of the walk in and is a good place for a couple of squares of chocolate.

The scenery is a lot wilder after Forest Lodge, with the lower slopes of Braigh Coire Chruinn-bhalgain and Beinn a’Ghlo on the right and crags on the left. There is a lot to see so although it is a long way it is never boring. There are lots of waterfalls on both sides and the magic of the river tumbling over rocks. Eventually a steep track goes off to the left and the riverside path (marked by an arrow in case you get confused!) goes downhill and after about 3km reaches the Falls of Tarf. I could see the ravine carved by the falls up ahead and there, conveniently situated, was a nice area of flat grass next to the river. In a brief gap between showers I hurriedly put the tent up and was soon cooking dinner.

The walk had taken me about 4 hours. 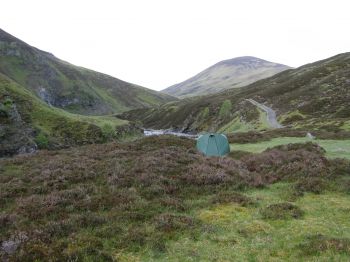 It rained hard in the night but the next morning looked perfect for walking. I set off at about 7am and was soon crossing the bridge over the Falls of Tarf. 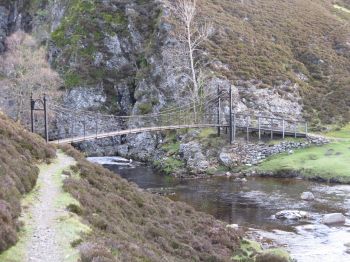 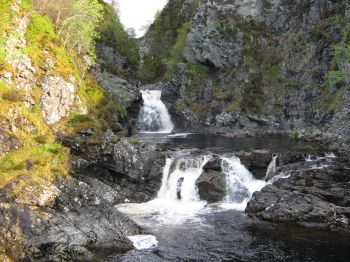 Just after the bridge there is a track that climbs steeply up the hillside. It started out as quite a good path but it soon became not worth the bother of trying to stick to it so I just followed my own line up to Coire na Creige. 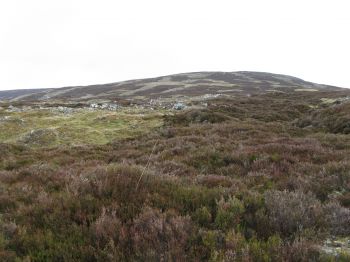 I aimed for a distinctive cairn that I could see on the horizon. 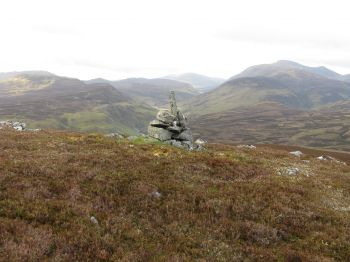 In fact there are a lot of cairns dotted about: Cameron McNeish has clearly not been this way! There is a cairn on the summit and the views of all the surrounding hills were excellent. 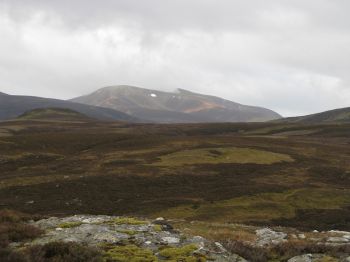 Once on the broad ridge progress can be rapidly made over short turf and heather towards the rocky summit of Braigh Coire Caochan nan Laogh. The terrain is rather featureless as you can see. 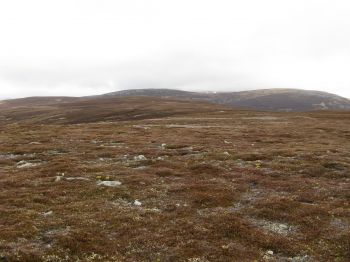 Then there is a descent (curses) before climbing back up to the top of Cam Greannach. From here there is not a huge amount of climbing to do: just follow the broad ridge round the corrie and up to the large summit cairn of An Sgarsoch. 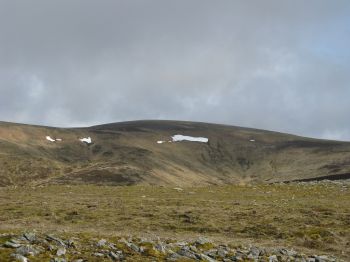 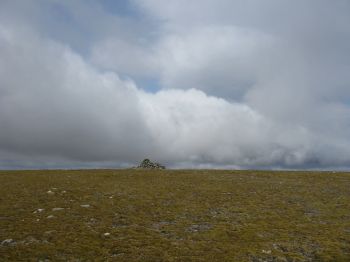 This gives good shelter from the wind – and it needed to. But there are magnificent views across to the main hills of the Cairngorms and you can see Carn an Fhidhleir. 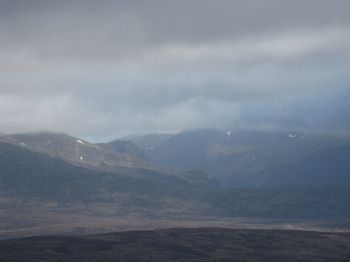 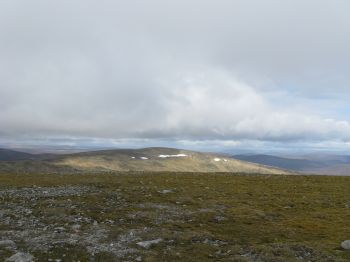 Although it doesn’t look that far away you have to lose a good 300 meters and then slog all the way back up again to get to it.

I met two people on the summit: one was wearing shorts. I asked him if he was cold and he replied that it was May! And there was me in a thermal base layer, two fleeces, a hat and gloves and wondering if I should put my jacket on! 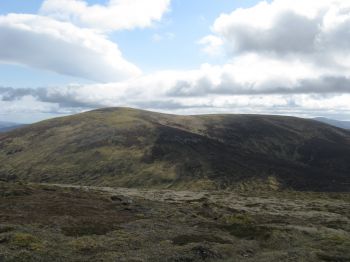 My plan then was to go all the way down the south ridge of Carn an Fhidhleir and walk back along the Tarf Water. But after a couple of kilometres I spotted a short cut. 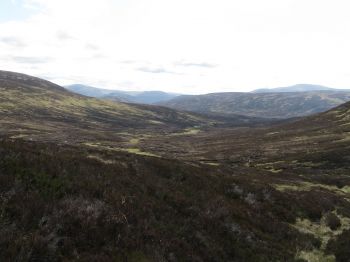 I should have realised by now that they don’t really save you any time but they always look so tempting. I followed a burn down the hillside which was very pleasant but then encountered a very peaty section which was harder going. Crossing the Allt a’Chaorainn I then went up and over the lower end of the broad south ridge of An Sgarsoch, all heather and peat and soggy stuff, heading for the building on the Tarf Water at 956797. It didn’t seem to be getting any nearer! But eventually I made it. This area would make another good camping spot. Then there is a path alongside the Tarf Water all the way back to the Bedford Memorial Bridge. 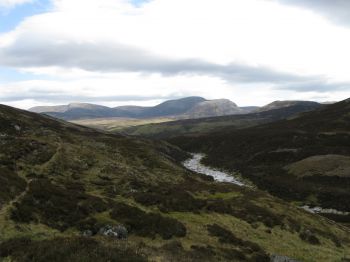 It was a great walk with lots of wild life: hares, an eagle, loads of deer, golden plovers and a yellow flower which looked like a miniature marsh marigold (any ideas what it is?). It took me about 7 hours. And then there was just the 16k back to Bridge of Tilt. But I got home to find a roast chicken dinner with all the trimmings waiting for me courtesy of my son.

If there are any cyclists reading this, could I suggest the following, based on my experiences in Glen Tilt:

1. Please get a bell and please ring it in good time when you are approaching behind walkers. This will give us ample time to see you and get out the way if necessary.

2. Please give walkers enough room. It is not necessary, certainly not on a path as wide as the one through Glen Tilt, to skin the elbows of walkers as you whiz past.

3. Please do not creep up behind walkers and shout at them just as you overtake. If anyone gives me a heart attack by behaving in this thoughtless and dangerous manner my family has instructions to sue!

A little consideration goes a long way. Thank you.

Great report - especially as I'm planning to do them that way too. There's nothing strange about wanting to walk up Glen Tilt - it's stunning.

I was planning on staying in the Tarf hotel - was that the building you went past by the Tarf?

Please get a bell and please ring it in good time when you are approaching behind walkers.

Paul Webster wrote:Great report - especially as I'm planning to do them that way too. There's nothing strange about wanting to walk up Glen Tilt - it's stunning.

I can't wait to see Glen Tilt but am probably just going to see it when I do the Munros from Blair Athol (forgotten the names again and at work). I'm definitely doing those 2 though from White Bridge by cycling from Linn O' Dee to around the bothy (Gelder/Geldie?).

Paul Webster wrote:I was planning on staying in the Tarf hotel - was that the building you went past by the Tarf?

I'd love to see the Tarf Hotel as I've read about it in my 'Mountain Days, Bothy Nights' book so often...

Please get a bell and please ring it in good time when you are approaching behind walkers.

Paul Webster wrote:Sadly bells do seem to have gone out of fashion amongst cyclists - probably because I've still got one

I've got a bright green squawking crocodile instead of a bell - usually makes most people laugh!