This seems to be the season of short day walks for me. I know it's spring with lengthening days but with much to do in the evenings I'm having to be content with short days out on the hills and then back home for teatime. But when a crackin' day is forecast it's still very much worth it to get out on the hills. With clear forecasts for Glenshee my "senior" mountaineering friend John and I set out with An Socach as our target. It was a great day from the start and despite hold-ups and even a navigation error by me on the way north (I'm much better with the map and compass - I hope!) we were in Glen Clunie and ready to start out by 9:37am. Entering the gate we set off up the track by the Baddoch Burn. You don't see An Socach at first and you might be tempted to head up the trail from Baddoch to Sgor Mor - but it's not the direct route to An Sococh so we kept on the track up the glen. I'm not that keen on landrover roads but they do get you to the places you want to be quickly. Soon were were at the ford below Socach Mor and discovered there was a lot of water running down the burn. It seemed wise to head up the burn to find a higher fording point. There was even a path through the heather! Heading up the burn

Then we decided it was time to cross the burn. But we nearly came cropper!

The usual crossing place at a waterfall was well under water - so we scrambled down the banking and crossed balancing as best we could on slippery wet rocks! Why can't Vibram soles have some grit in them for friction? Anyway we were soon safely climbing up the hillside to the cairn on Socach Mor which was a good place to stop for a quick bite to eat - and to take in the view. The climb up onto the ridge became quite steep in places. But soon it was levelling out as we approached the east top. Towards the east top of An Socach

It always seems a good idea to me to visit secondary tops of any Munro - in case someone resurveys the summits some time in the future and finds the secondary top is really the summit! By now we could see great views of the hills all round and the summit ridge of An Socach stretched out before us. It was definitely stony ground up there - but the going was good as we made our way easily along the ridge. Finding the route would be a lot more difficult in poor visibility as the ridge is broad and flat and there are many paths to choose from! It didn't take us too long to cover the 2 km of summit ridge and soon we were at the summit of An Socach where we met our only other fellow walker of the day sheltering in the cairn. He was heading off towards the east top as we arrived to settle down and enjoy our lunch. 
The views were amazing of Glas Tulaichean to the south-west and the Cairngorms to the north. The route back was back along the ridge with fine views of Glas Maol in the background. Glas Maol from An Socach

We decided to descend from the col mid-way along the ridge. That meant crossing a snow field before descending on the east side of the burn. There were some dramatic snow features on the opposite side of the burn and even a small area of avalanch debris below a cornice. The route led us easily off the hill but we took care not to cross the deep snow which was getting quite soft and which was probably hiding deep gullys in places. 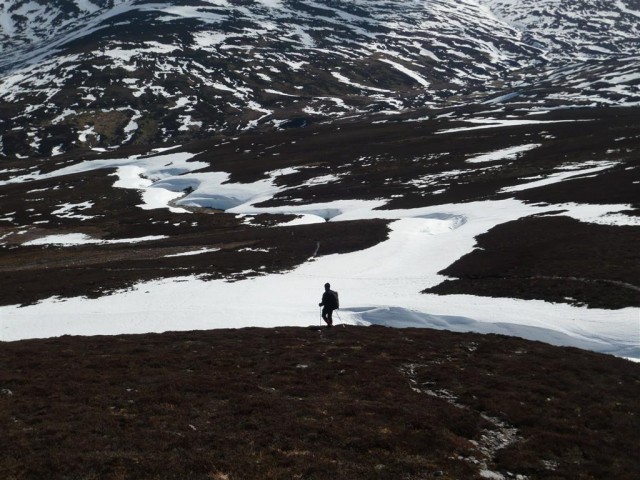 Snow in the gullies

Then it was back down the valley, along the Baddoch Burn, to our starting point in Glen Clunie It was a great day on the hills and the sunshine all day had been a bonus. The only thing was - I know it was only early spring but I should have had the sun screen on! I was fairly glowing that night!

Great report and some beautiful photo's - thanks for sharing

Great stuff Redrock, looked like a great day to clear the lungs and feel inspired. Here's to a the on-coming Spring!

Nice stuff - you can really feel the onset of spring in those photos!

Great report Redrock and some great pictures. I was on the Glenshee 3 on Sunday and was tempted to add this hill to me route. Looking at your pictures and route description I'm glad I didn't now. This looks a much better route to get the best out of the hill. I shall be back ....

Thanks guys for the feedback. It really was a pleasant walk - and just right for the short day we could manage at the time. I'm really looking forward to some longer walks as the summer comes on - and maybe bagging a couple of Munros in a day. But for now I'm quite enjoying climbing them one at a time!

Aye, thanks for that. Only found this as this will be my first Munro tomorrow.