We put off Blaven yesterday because the cloud was too low, but on the way back from the Quirang in the afternoon we noticed the top was clear around 4 o’clock so even though we had yet another low cloud day on Skye there was the possibility that we may get a clear top sometime in the afternoon. On that basis we arrived at the car park at 9;50, a nice late start. We followed the WH route as best we could, so no map. The John Muir trust have provided excellent facilities and good paths up to the hill. We proceeded up the lovely Allt na Dunaiche path with the mountain looming ahead of us shrouded in cloud down to about 500m. 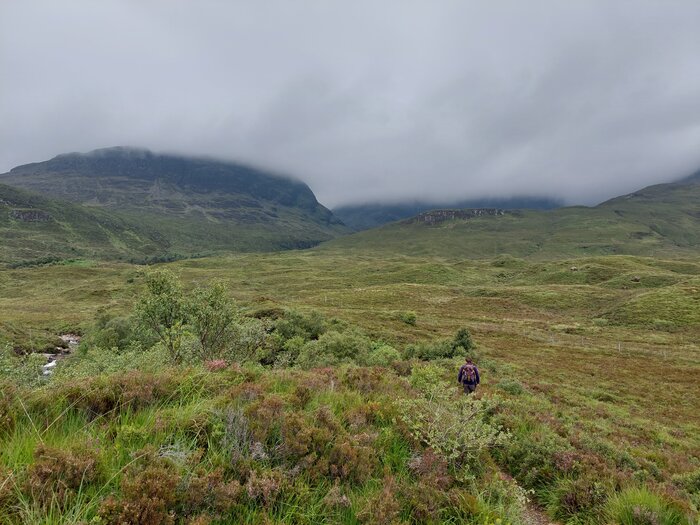 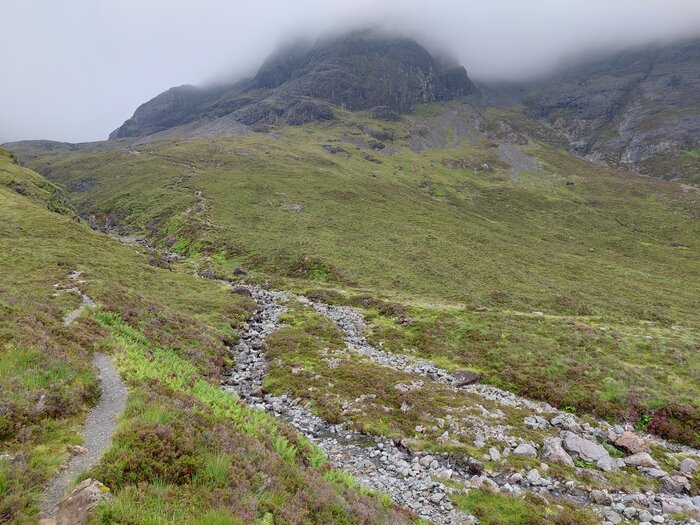 The path crosses the burn and gradually ascends into the Coire, our lunch spot later in the day 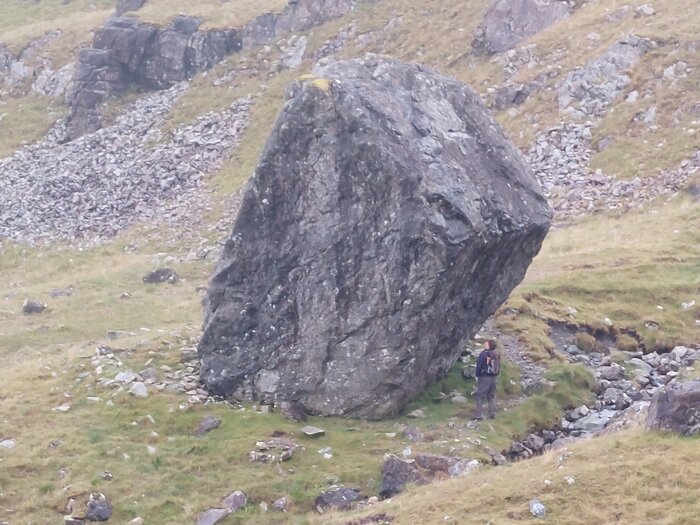 An Stac, top shrouded in mist

The path swings Southwards and up the gap between the main peak and An Stac and up into Fionna Choire. Ben went off to look at a large block to see if it was suitable for bouldering and I tried to make out the route as it disappeared into the clag. As the WH report, we stuck to the scree and boulder slope just to the left of the cliffs we passed on the way in. With poor visibility it was difficult to plot a decent line but we couldn’t go wrong if we followed the scree. There was an awkward gully with loose boulders, we went up the right side then across onto better ground, once at the top of this the slope started to flatten. Just as it did so a group of nine of ten students came ambling down from the summit area, laughing and joking, chatting away –must have been a field trip of some sort. Only a few were carrying rucksacks or even coats so they were intending a fast trip. Their sound receded as fast as their sight in the dense mist. 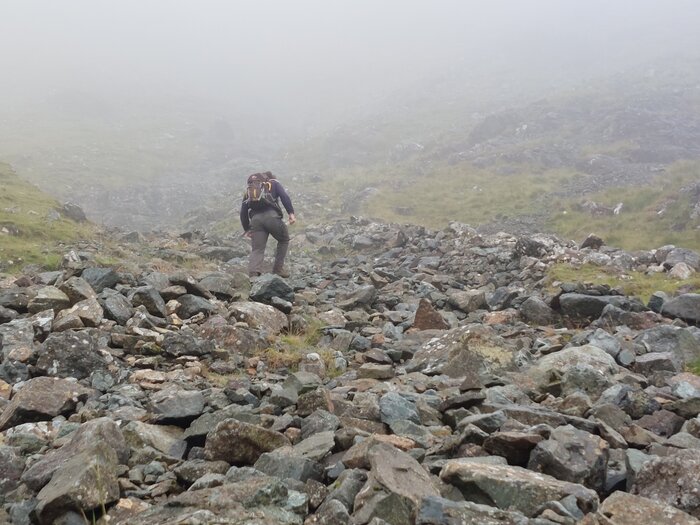 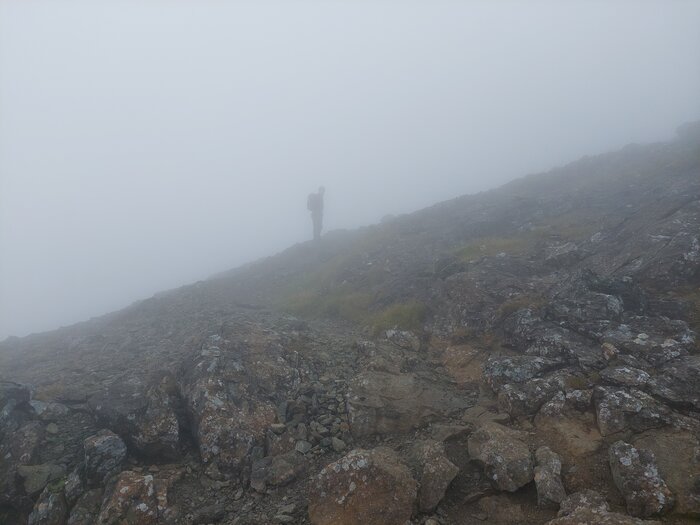 Solid ground beyond the scree slope, just before we met the large group of students

After that we walked across the surprisingly flat summit area which must have been on it’s West side; there being no real sense of place or distance. We sat on the large cairn and had a quick snack (it being 12;18) and debated whether to attempt to get over to the South summit, with a view to descending by the South ridge. Given the (lack of) visibility we decided against. There seemed little likelihood that the clag would clear, or the famous raven would appear, so we packed up and headed down. At the last moment we realized that we forgot to take the Summit photos, enjoy! The all important summit cairn shot. Views South to the South Top, Camasunary Bay, Rum and Eigg not available. Setting up the summit shot. 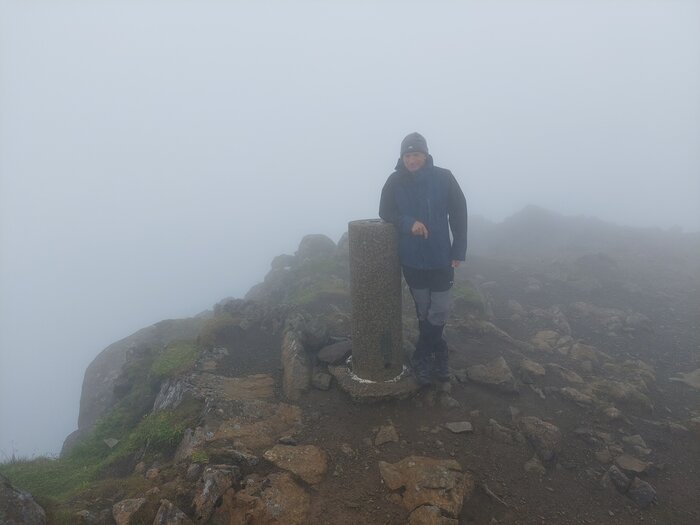 The trig point, one of the best view points in the Highlands, with spectacular views of both the Red and Black Cullins, all the way to Storr. Ben dropping out of the Clag into the Coire

We headed our way back down the way we came, although we manage to diverge from the route a number of times. We came across a party of three seemingly lost heading up a dead end gully near the cliffs; after a brief discussion they decided to halt and have lunch, they didn’t seem too perturbed and were confident they would find a route, so we left them to it. Down the scree the visibility improved and we got below the cloud base, we could see the coire below and a couple of people meandering around. The woman was wearing walking boots, had a decent waterproof and rucksack, the man trainers and white jogging bottoms. He said they were looking to climb their first Munro; we suggested that this might not be the best one to start with, given the terrain, and that they wouldn’t see much when they got to the top. They decided to press on. The path across the Coire, looking towards An Stac 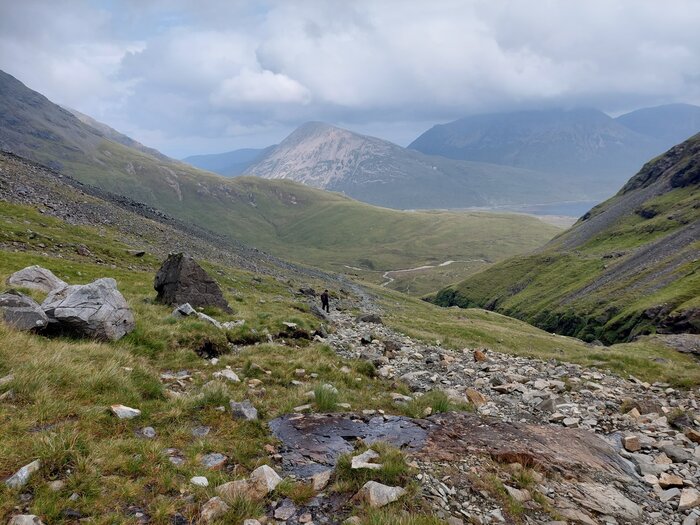 The path down Coire Uaigneich 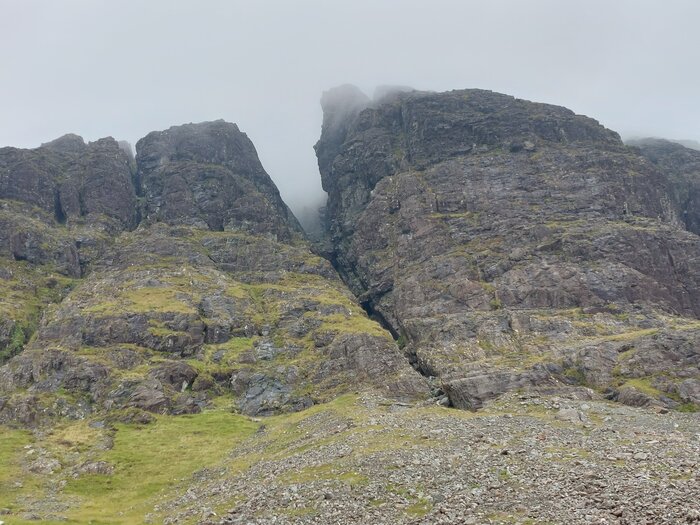 Cleft in the East face of Blaven

As we descended the coire the top of An Stac came into view and there was a hint that the cloud was lifting but we continued to head down. Passing another couple who were heading up we wondered if they had a better handle on the forecast than us. We stopped to have lunch where the path crosses the stream and there’s a good view of the hill. Of course the sun came out to taunt us; the clouds cleared the smaller peaks but still hung around the Munro. To our relief the first couple came walking past us, having decided to give up on the hill for the day. The view East towards lock Slapin 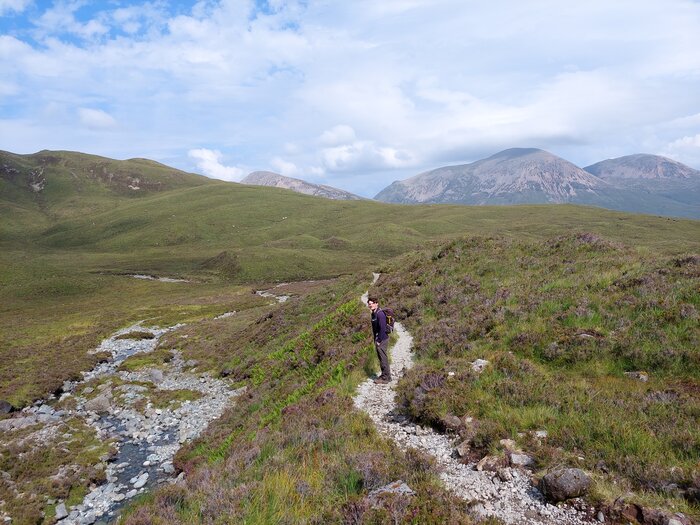 The sun's out - have we made the right decision? Sgurr nan Each, free of cloud We continued down the path, in intermittent sunshine, still wondering whether it would clear; the intention being to go to Elgol and have a look round. It was a pleasant walk out. We drove to Elgol, had a quick look round (it takes about 30 seconds) and stopped off at a new café at the top of the village. The owner opened up early so we could have afternoon tea, much appreciated. As we drove past Blaven on the way back to Broadford we could see the cloud had again descended, we made the right decision to leave but felt a little sorry for anyone ascending in the hope of getting a clear top. We spent most of the time gained queuing for pizza in Broadford Sgurr nan Each, the Easternmost outcrop of the Black Cullins 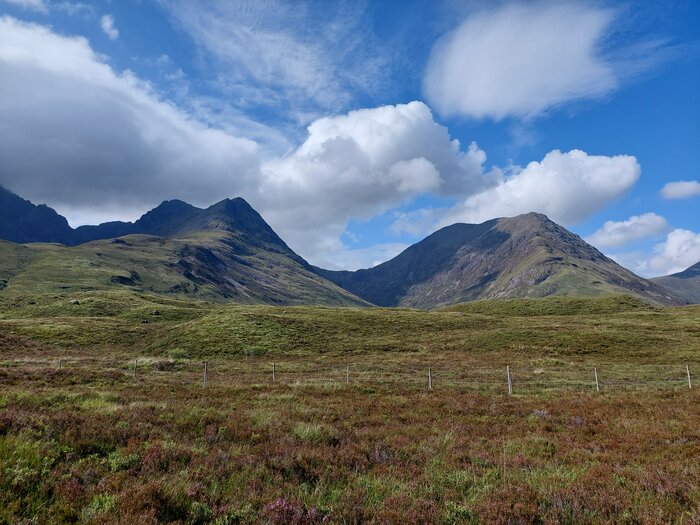 Sgurr nan Each and Belig The valley between Belig/Glass Bheinn Mhor and Beinn n Cro . The top Dun Cann on Rassay can be seen in the far distance. Although a disappointing day, not only for the lack of views but for the non-appearance of the raven, we’ll be back for another go, it's relatively easy to get to and ascend; in the meantime I’ll just have to keep reading the reports of others to show what it could have been like.