This is going to be a weird report, as it was a weird moment in history

. It is not my intention to spoil anybody's day with long, boring lectures on international affairs

. But with the first anniversary of Smolensk disaster in two days time, I felt I should make that little trip down the memory lane. Ups, sounds sad already! Let's get down to business then.
It was Saturday, 10.04.2010. Bright, sunny morning with a good forecast for the whole day. We had our plans to travel far north to climb Ben Hope and Ben Klibreck. It's a 2 hour drive from Inverness so we had to get up early and I remember packing some stuff into my rucksack when Kevin turned on the TV in the other room to double-check the forecast. Then I heard him calling: Better come here to see this!!!
What I saw on the screen was a distant shot of some smoking debris. At first, I didn't understand what happened.
"A Polish plane crashed in Smolensk, that's in eastern Russia" my husband said "It happened less then an hour ago. All the channels are full of this. About 100 victims, no survivors."
"Was it a passenger plane?" I asked still a bit stunned.
"No, darling. You better sit down - it was the Air Force One. And the President was on board. Plus half the government and army leaders."
Do you remember where you were and what you were doing when 7.7. happened? Or when WTC towers fell? For me news about Smolensk was exactly that kind of experience. A disaster for Poland, could turn into a total chaos in the country...
"There's nothing we can do" I said after a few minutes, pushing the shock away "The news isn't precise, they don't even know how it happened, was it a bomb or maybe just an accident... We have to wait and see... And in the meantime let's climb what we planned!"
You may be surprised at my reaction, but what was the point in sitting in the front of TV, watching the blurred footage of burned debris? Moving as it was, we were thousands of miles away from it in our little Scottish world. Show must go on

Let's bag a Munro and bring smiles back to our faces

Because we were a bit late driving up, we had to live Ben Klibreck for another day (we climbed it eventually last month). When we arrived at the foot of Ben Hope, the sky was blue and the air was "full of spring" - an adequate feeling for the name of the hill

For ruin enthusiasts there is a well preserved broch, Dun Dornaigil, by the road up Strathmore. 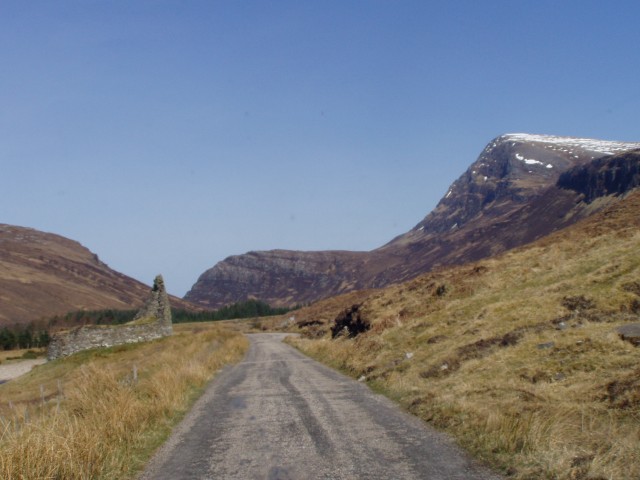 Approaching Ben Hope, ruins of Dun Dornaigil to the left.


our_route.gpx Open full screen  NB: Walkhighlands is not responsible for the accuracy of gpx files in users posts
From the car park just of the road we followed a boggy path up the slope - the beginning of the route is marked with an appropriate signpost: 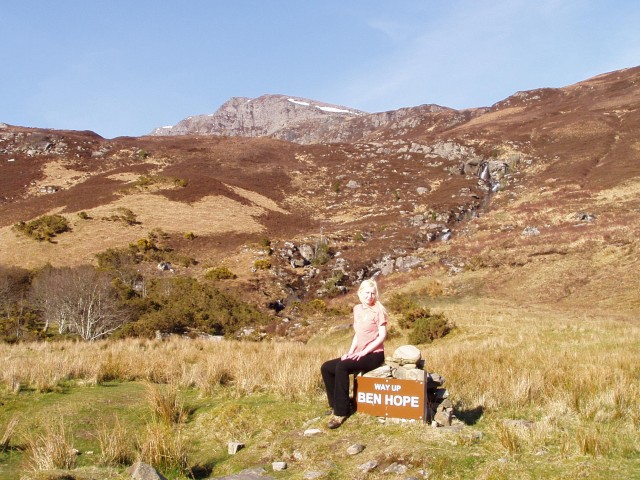 The first part of the climb took us steeply up along the stream with some very lovely waterfalls. We stopped in a few places to take pictures. Also, the higher we climbed, the better the views! 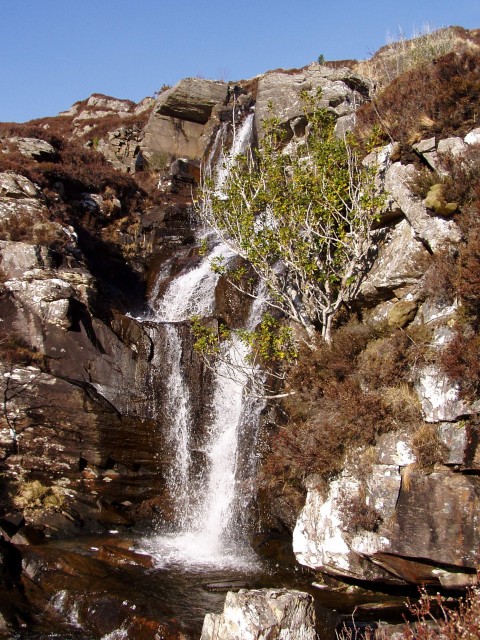 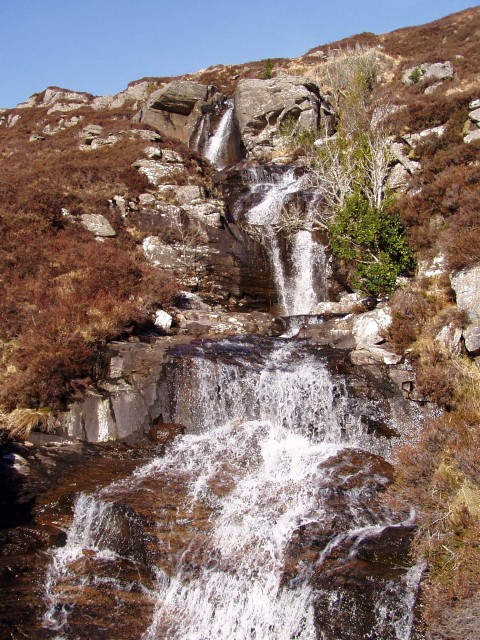 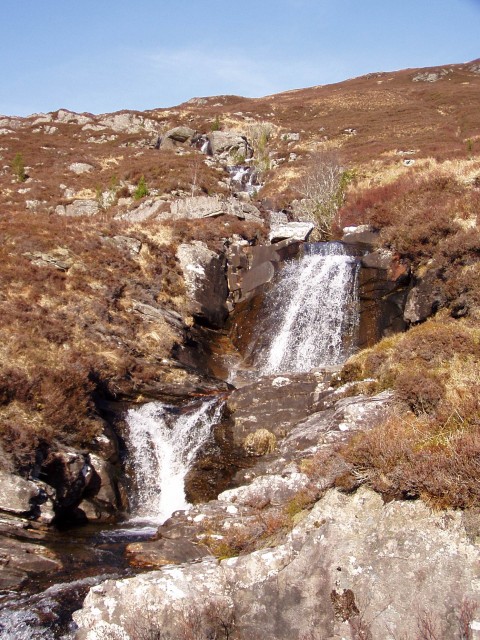 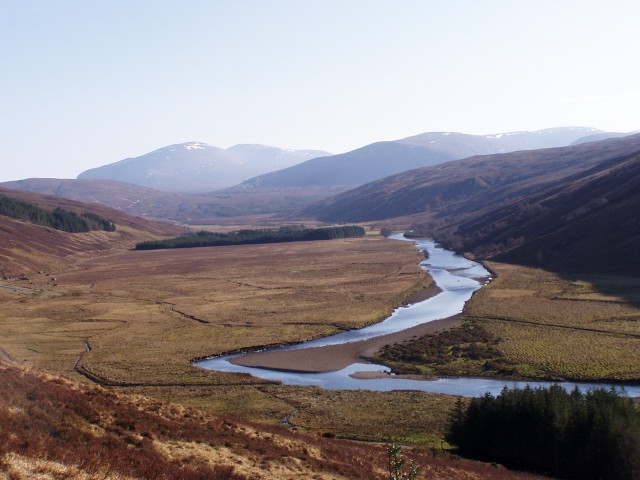 After avoiding some crags and balancing on mud, we reached the ridge of the mountain. Here we crossed the stream and simply walked up the slope to the top. It's an easy route, with a prominent path almost all the way up. Once we left the wet bits behind it was a very pleasant walk. 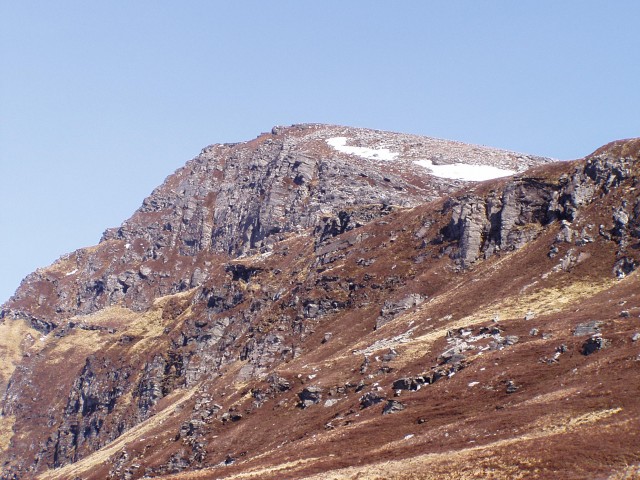 The top of the hill 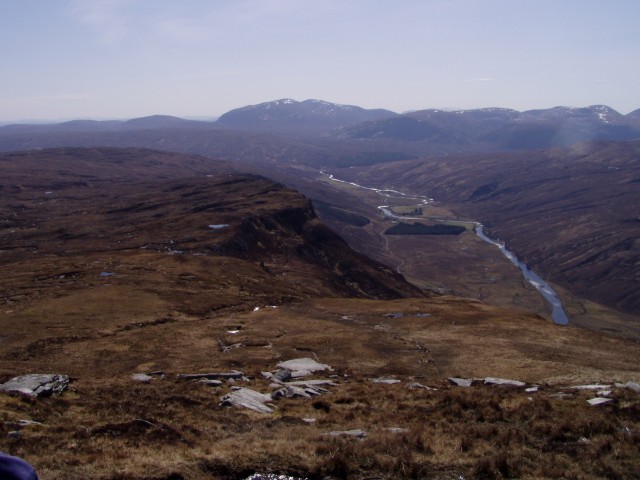 The summit area was still covered with a layer of snow. The trig point is located close to the eastern cliffs of the hill. We sat down on the rocks emerging from snow and looked around - it was a beautiful panorama... 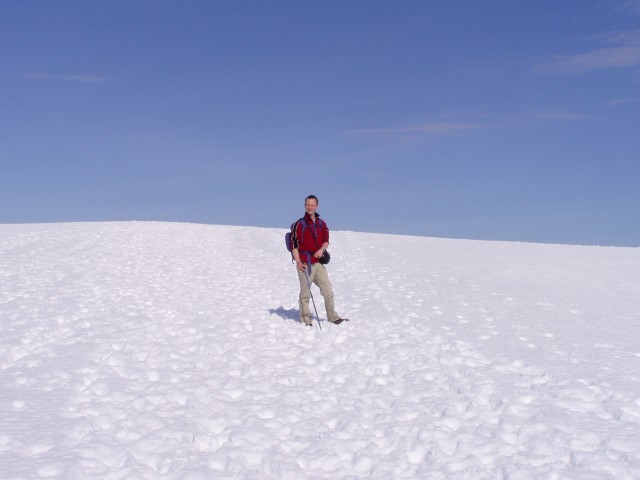 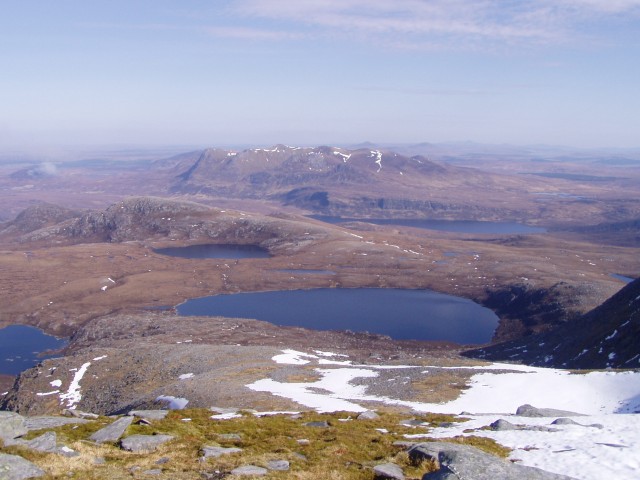 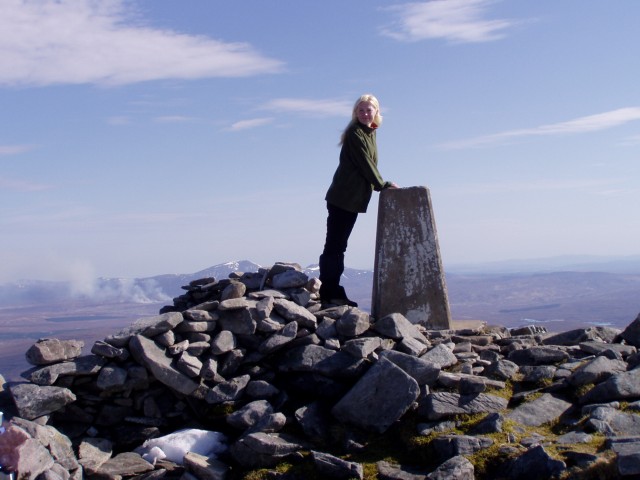 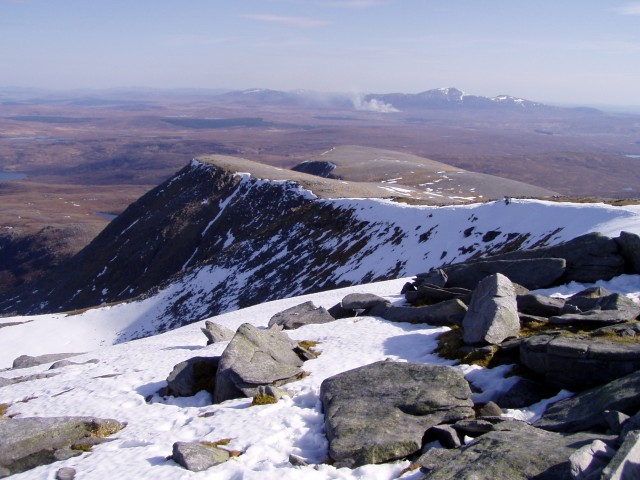 The eastern side of Ben Hope 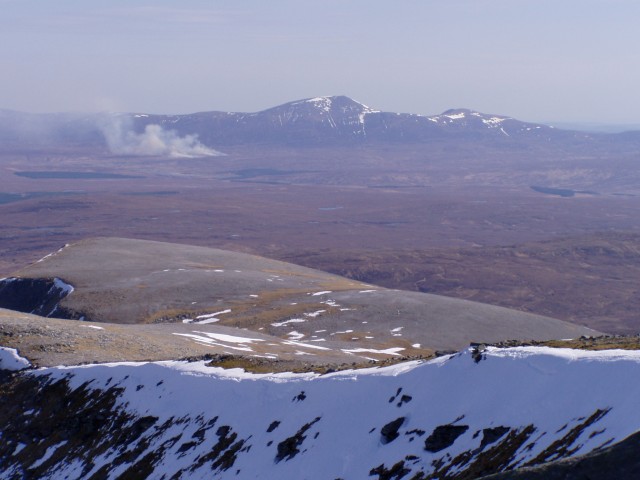 Ben Klibreck in the distance 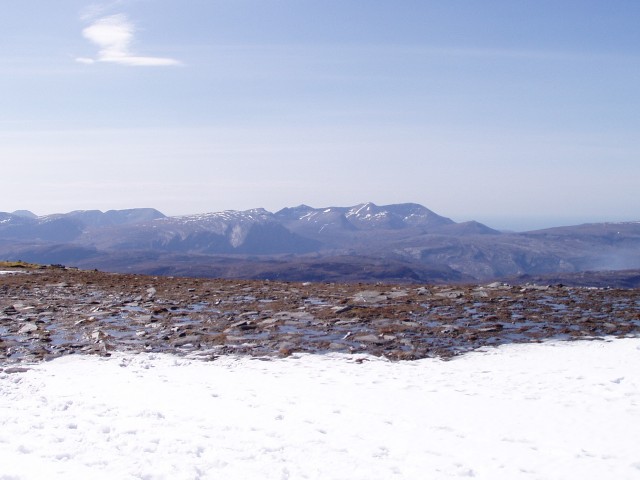 Arkle and Foinaven to the west

We spent some time on the top and finally we descended back to Strathmore, sinking in more lovely views on the way down.
"So we ticked off Ben Hope" Kevin said at some point "Paradoxically, thinking back to what happened in Smolensk, there's no hope left for Poland."
"There is always hope" I answered, staring at the desolate wilderness in the far distance - "Somebody said once that hope always dies last. And my country will survive it. I believe it will wake up from the nightmare, strong and stable... Emerge to life, like Phoenix from the ashes."
Before we left the remote world of Ben Hope, we paid a short visit to Dun Dornaigil. Unfortunately, the interior of the broch is filled with earth and rubbish, so we could only admire it from the outside: 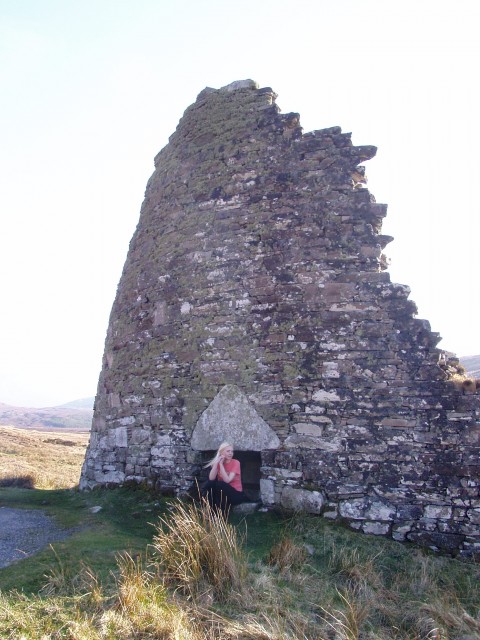 Well, it was a weird time. Twelve months on, I was proved right - my country went through the hard days with dignity. It is widely known we Poles are tough and hardy creatures

Today when I look back I can only feel pride - I may be a mixture of genes but I have enough Polish blood in me to make me proud of who I am.
As for Ben Hope - it's one of the nicest Munros I've climbed so far. Highly recommended

A moving story of hope with good report and photo's of the aptly name Munro...............let's all hope Japan can recover from what appears to be an endless tradgedy.

Great report and cracking pics BP and a very aptly named hill. I confess to immediately assuming Russian intervention in the Smolensk disaster and though investigation's say otherwise it is a lingering thought

B.P., you have reminded me very poignantly of a time I spent wandering through the Cairngorms from Braemar to Rothiemurchus via the Lairig Gru. I went to Aviemore to catch a train home, and found a newspaper lying on the waiting room seat. I picked it up to see what had happened in the world in the few days I had been away, only to find the now-iconic image of The Maid of the Seas' cockpit lying in a field outside Lockerbie...
Life does go on (sometimes it seems to go on, and on, and on...) and time does indeed heal.

Enjoyable report and some great pictures of the area

. As you suggest, life must go on and I can't think of a better way to seek some sort of emotional comfort.

Great report,
I certainly remember lech Valenska and the Gdansk Shipyard and followed the events as they unfolded in the early 80's. The events of 2010 when the tupelov tu-154 crashed are etched into the annuls of history. such events shape our world and Poland, thankfully, never regressed after this terrible incident.

great pictures. Love the picture of ben Klibreck in the distance.

I done This munro on my own in a raging torrent early last year. Fantastic to see the photos in nice weather.

Moving report there BP and as stated life does go on.....however I hope I don`t have a national tragedy today when I
back Backstage and Oscar Time in the 4-15 at Aintree today.

Thanks for all the comments, folks...
It was the most difficult report for me to write, with all the emotions surrounding that Saturday last year. Strangely, as I mentioned before, we chose the hill before we heard the bad news. As if something had told us to pick the mountain of hope for this particular day. Spooky

We will probably never know what happened to that plane and the longer investigators dig into it, the more complicated it looks. But world has moved on and so have I. I'm packing my stuff to climb another hill or two today

Lovely report BP and thanks for sharing it with us.Some lovely pictures also.

fantastic report BP under difficult circumstances.
totally off topic,in 1970 a polish lad/man saved my life
his reward (i believe)was good healt till he was 92

i give you this statement

NEVER give up hope