So, in my younger days I did a fair bit of hill walking but for various (pretty rubbish) reasons I've not been up a Munro for about thirty years. But then lockdown arrived and, being in Edinburgh, I found myself taking exercise by hoofing up and down Arthurs Seat on a regular basis. And that might've been that if my son, Francis, hadn't suddenly started coming along with me.

Now, anything that'll drag an 11 yr old away from You Tube and Minecraft and out into the fresh air needs to be encouraged, so as lockdown ended I decided to try and keep him interested by expanding our horizons a little bit. First ticking off the rest of Edinburgh's seven hills and then hitting the high(ish) spots of Orkney on holiday and a few other local lumps. I didn't want to put him off by getting too ambitious too fast so I determined to go at his pace. But when I caught him eyeing the Pentlands one day I could tell he'd caught the bug!

Cue a bus out to Hillend the next Saturday and a day out up Caerketton and Allermuir Hill. It was the top of Allermuir which sealed the deal, I think. Munching sandwiches looking at the views SW along the reservoir and the shapely hills beyond. He announced he fancied tackling a few Munros. This got me very excited - because I'd already realised that I wanted to do this again too!

So a plan was formed. We'd work our way up from Allermuir's 493m in easy steps and chart our progress on Walkhighlands. Which is what brought us to Flotterstone on a bright but blowy Monday morning in October set on tackling Turnhouse Hill, Carnethy Hill and Scald Law. 506m, 573m and 579m respectively. Easy steps. (sort of!)

I should say at this point that having looked at the map I'd blithely described the route to Francis as "up to the top of Turnhouse, along to Carnethy then down and up to Scald Law" - which may have contributed to (or caused entirely!) the confusion which followed. Anyway, we hauled out of the carpark and up the first slopes of Turnhouse. Pausing to catch our breath at the last cluster of trees, we also layered up against the stiffening breeze. It was quite chilly!

Coming out of the trees rather than following the main path we decided to contour round to the right and come up onto the ridge from the NE shoulder. This had the advantage of taking us out of the wind for a while. 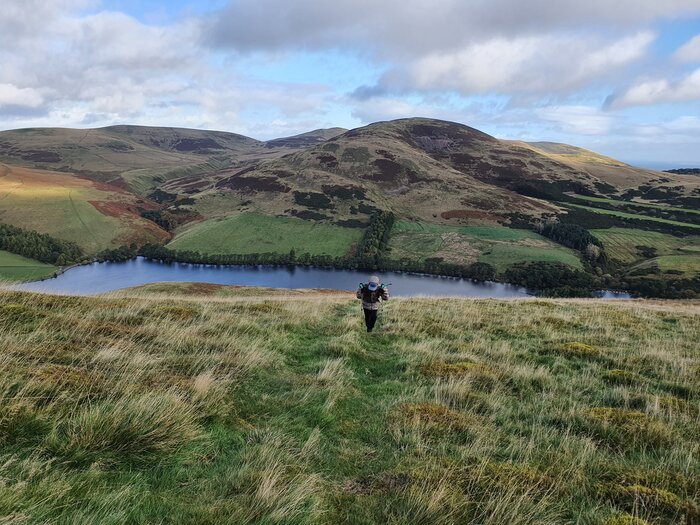 We came up panting onto the ridge and stood proudly on a little summit. Remembering my description of the route, Francis quite reasonably assumed this was the Top of Turnhouse - and I was so distracted by the view that I didn't argue with him. Dear reader, it was Not the Top of Turnhouse. Glorious views from Not the Top of Turnhouse.

Exhiliarated by our triumph we set off toward the next summit - which logic now insisted must be Carnethy. Reaching the cairn, the wind was whipping up so we didn't hang about - or give too much thought as to why the cairn was so much smaller than I'd expected! We pressed on and headed down, grateful to get some respite from the breeze. And we eyed our next target warily. "Down and up" So that must be Scald Law, right? (wrong) I confess, at this point I was beginning to suspect that we'd misidentified and that we still had two to climb rather than just one - but we could only see one ahead and I didn't want to dishearten Francis - so I kept my suspicions to myself. The path up was rocky and steep in places but we took it steady and regular deployment of jelly babies kept things moving. Before long we were clambering up a properly large summit cairn - from which I could now see the real Scald Law ahead! Francis with rainbow - before he realises it's Carnethy not Scald Law! We cooried among the stones out of the wind and I broke the news to Francis. He was not amused. But sandwiches and chocolate lifted spirits and we determined to head along the ridge and finish what we'd set out to do. Down and Up to Scald Law. In the end, the ascent felt easier than Carnethy. A good path. A steady incline. And the satisfying views behind where we could see how far we'd already come.

The summit was wide, windswept and very welcome. There were great views of the Kips - but they would have to wait for another day. (I knew from the grin on Francis' face that there would be another day!) The descent was straightfoward and, once out of the wind, we could shed a layer and enjoy the sunshine. Descent and exit route along the reservoirs.

Francis flagged a little on the long walk back along the reservoirs - but he perked up when I reminded him that there was a cafe at the carpark - which meant only one thing... Cake!

A glorious day out. And a step toward higher things! Looking back along Glencorse Reservoir. Thinking about cake.