Decided to do this pair from the Inverlochlarig side and thoroughly enjoyed it although the wind on top of beinn tulaichean was incredible. The car park is at the end of loch voil and at the end of a long single track road (about 5 miles).Only 2 cars were there so it looked like it was going to be a quiet day on the hill and so it proved to be. Walked along to inverlochlarig farm and was off over the stile and heading for beinn tulaichean by 10am. Easy walk up the path onto the track that cuts through the glen before it was time to head onto the slopes. Beinn Tulaichean doesn't have an obvious path so it's a case of picking your line and zigzagging your way up. The walk up the grassy slope was deceptively knackering and I paused a few times to enjoy the views back along Loch Voil and of Ben More and Stob Binnein to the north. The wind was picking up as the summit popped into view and by the time I was at the cairn ( 2 hours from the carpark) it was blowing a gale. Not sure what happened to the pleasant conditions that had been forecast. Suppose the wind could be described as refreshing but en route to cruach ardrain I was so "refreshed" that I was considering chucking it. It was a real relief to get over the ridge north northwest to cruach ardrain (50 minutes later) and hunker down behind the cairn for some soup and a warm up. Sadly not much to see at the summit so after polishing off my lunch it was time to head back to the bealach with beinn tulaichean and begin heading south east down the slope onto the track that runs through the glen (think it goes from inverlochlarig to crianlarich) and south back to the farm. Was strolling back to the carpark enjoying the afternoon sun that had appeared when I heard some frantic barking coming from the farmhouse I was passing. What effective guard dogs I thought as I walked on. It was then I heard the pitter patter of paws on the tarmac behind me getting louder as did the barks. Turning round I was met by 2 huge dogs who loudly advised me to get off their turf.

Adrenaline pumping, I affected nonchalance and 5 hours after leaving it, I was back at the car. Phew.[img] no excuse for a wrong turn over the gate and on to the summit 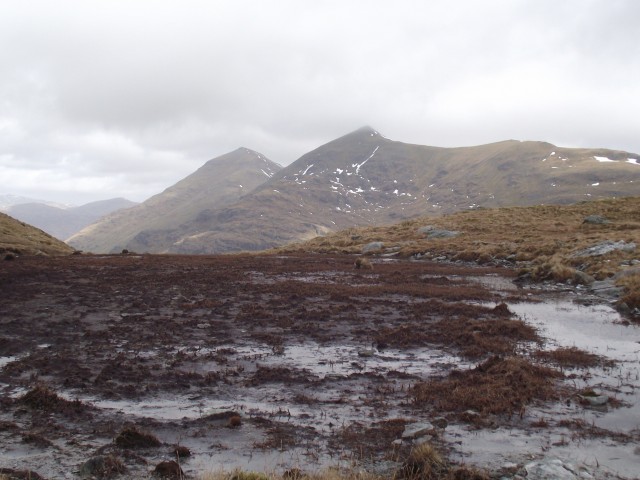 cruach ardrain from the farm 2 of my earliest Munros these a few years ago and also done from this side. I almost got blown away on Wednesday so can sympathize

I was the owner one one of those cars - the blue Focus. I'll second the wind up top that day - was interesting on the first summit - and brutal going face-on into it coming off Ardrain. I got the dog welcome on the way up - two over-friendly paws square in my back too

Was a grand day out of the wind. I've no intention of driving that road from Balquhidder for a while again though!

I had a cracking day up them summer 2009, got totally burnt had a nice tan line from my rucksack had to cool down a few times,could have done with abit of yer breeze! found a good spot in the burn next to the track with a smooth stone slide and was deep enuff to jump in, amazin day!