First tried to do this walk back in 2008, but that day I had an older dog with me who was tired from doing Ben Wyvis the day before. It was only my third solo walk and I went slightly wrong going too far west along Loch Bhraoin. After battling around a deer fence, we ended up having lunch at Loch Toll an Lochain and coming home. The second time I tried was last year in October, just after moving to the Black Isle, but when I got out the car, I was almost blown off my feet it was so windy. Didn't fancy what it would be like at 3000ft so gave up again and went around to route scout the Eastern Fannichs by walking up the estate track from Grudie.
So this time was third time lucky.


activity_6893380706.gpx Open full screen  NB: Walkhighlands is not responsible for the accuracy of gpx files in users posts 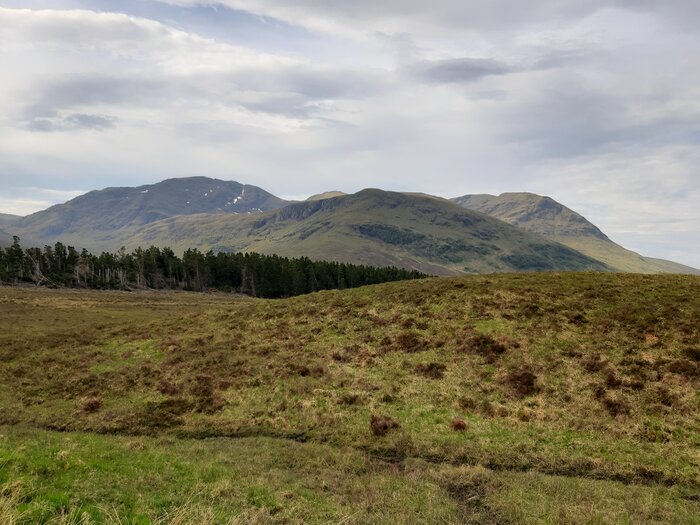 Today's hills from the car park 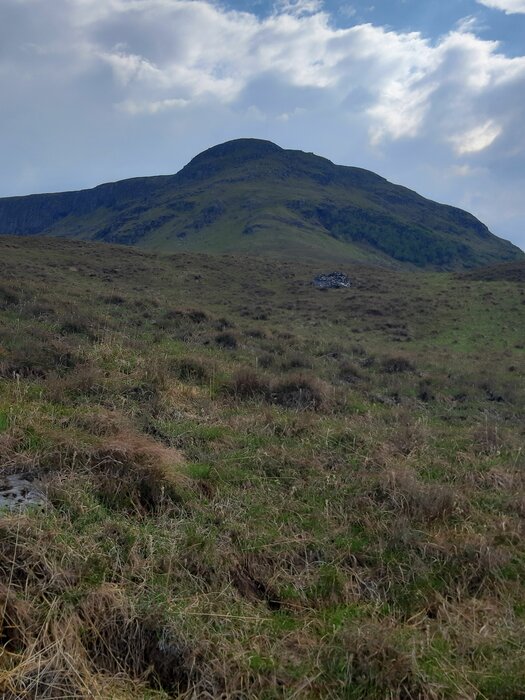 Got it right this time, heading up Leitir Fhearna Central Fannichs as we started going up the hill

Going up Leitir Fhearna wasn't too bad, there was a nice path and then we were up on on a wee plateau before starting up the Druim Reidh ridge towards Toman Coinich Loch Toll an Lochain, as far as I got last time

At this point, following the WH route we were planning on going up Toman Coinich, staying well clear of the path on the right leading to the col between TC and A'Chailleach because it was steep and rocky. I am not keen on edges so we thought it was best to avoid it and take the longer route. As we progressed along Druim Reidh it became pretty clear that we were not on the ridge path and were indeed on the path to the col!!!

So did we trudge up to the top of the ridge or carry along the "risky" path. Well we decided to carry along the path and while it was very rocky, the dog coped with it fine, and I didn't find it at all worrying, despite being a feartie, in fact the ridge up to to A'Chailleach was much worse for me! 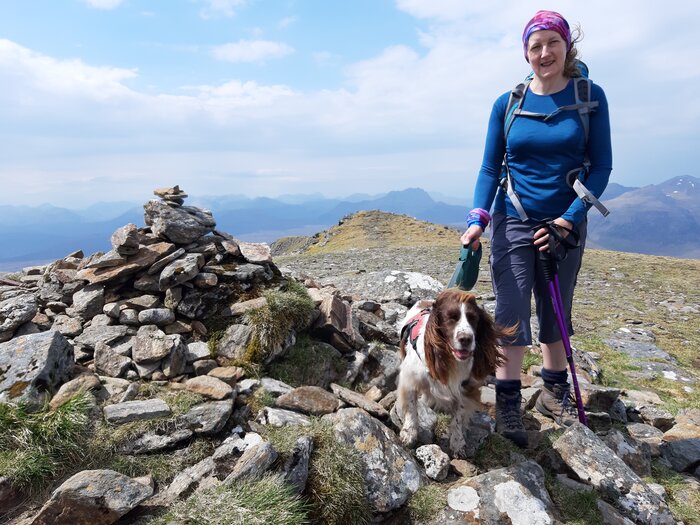 And then we were there, atop A'Chailleach So after a quick spot of lunch it was time to return to the Col (Bealach Toll an Lochan). At that point, the usual route goes up Toman Coinich but having unintentionally avoided this on the way up, rather than go up we decided to try going around it. There was no obvious path, but it wasn't too challenging, as long as you don't mind walking along with one leg higher than the other! It was on mainly grassy slopes which probably would have been harder if it had been wet, but we did the walk after quite a dry spell. Once we got around to Bealach a Choire Bhric it was a short climb to the top of Sgurr Breac. Sgurr Breac, family photo as this was my 100th munro! Looking out to Loch Fannich The other Fannichs from Sgurr Breac The journey back to the car looks a long way (just next to the forest)! An Teallach in the distance (I think)

After the summit we decided to carry on the traverse of Sgurr Breac, down its eastern ridge which was quite easy following a clear path (maybe one area of boulders that had to be negotiated). Soon we were down on the bealach in the valley at the start of the Allt Breabaig Looking back up Sgurr Breac from the valley I'm a bit pooped dad, can we have a rest! Route out along stalkers path next to Allt Breabaig

It was quite a long, but simple walk out along the glen passing waterfalls and eventually reaching Loch a Bhraoin and the track out to the road. Loch a Bhraoin and the old boat house

As always another great day in the hills