We had been out for a stroll around Loch Morlich yesterday to get a taste of the first extensive snow of the season, but today I fancied a hill. I was just going to nip up Meall Fuar-mhonaidh or something close to home, but Jackie decided she would come along and do a low-level walk. We wound up deciding to go over to Torridon, so I opted for a quick up-and-down of Spidean Coire nan Clach - I reckoned it would take me about the same amount of time as Jackie would take to walk around Loch Clair and Loch Coulin.


our_route.gpx Open full screen  NB: Walkhighlands is not responsible for the accuracy of gpx files in users posts
Jackie dropped me at the Coire an Laoigh carpark before heading a mile or so back along the road for her walk. There was snow right down to the road but the advantage of starting late (it was shortly after midday) was that the trail had already been broken. This was a good reason for going up here rather than my alternative of Sgurr Dubh! A bout of sciatica had left my right calf in a poor state so I wasn't sure it would enjoy ploughing uphill through the snow too much. Thankfully it was fine. 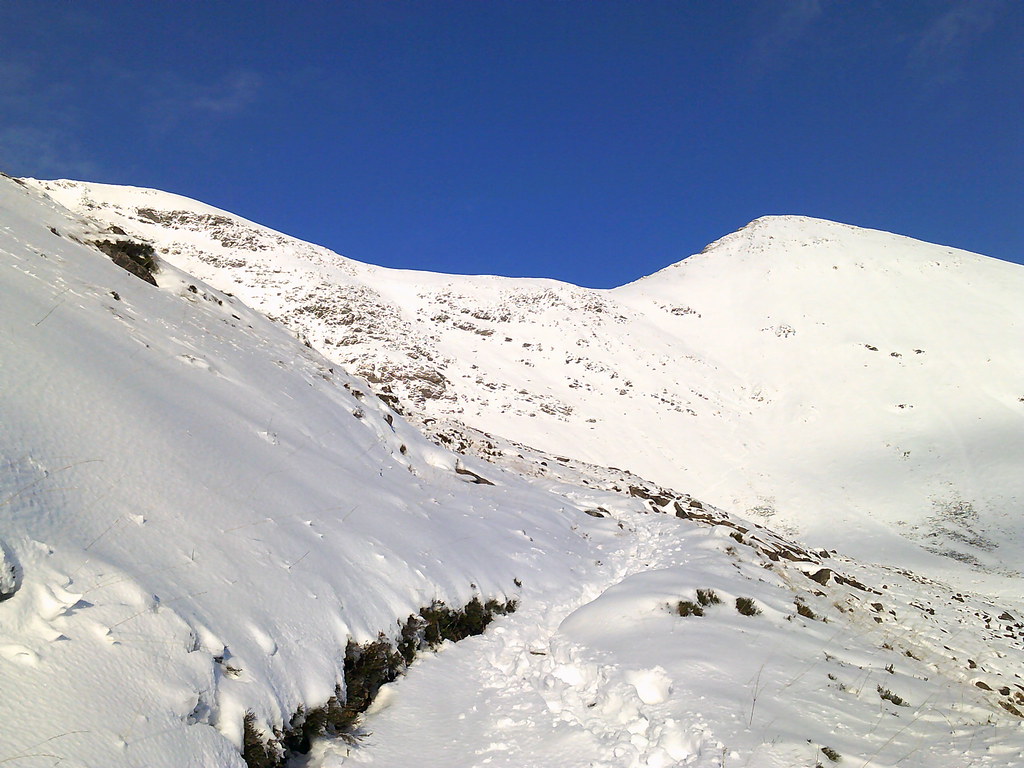 I made reasonable time up into the corrie, at which point I was going to move out onto the NE ridge of Stuc Coire an Laoigh. In the end, the deep snow away from the path (and sometimes on it) had me sticking with the footprints. I must have come down this route before but I don't remember much about it - I usually prefer being out on a ridge to being hemmed in by the corrie but it was gaining me height which was the main thing. 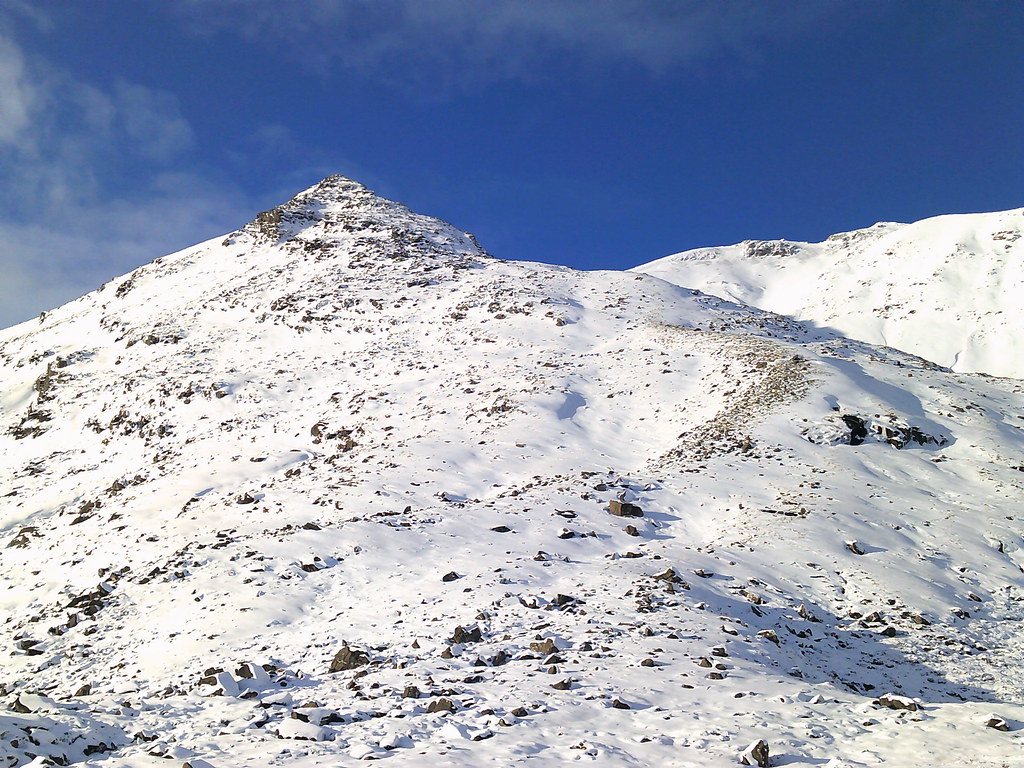 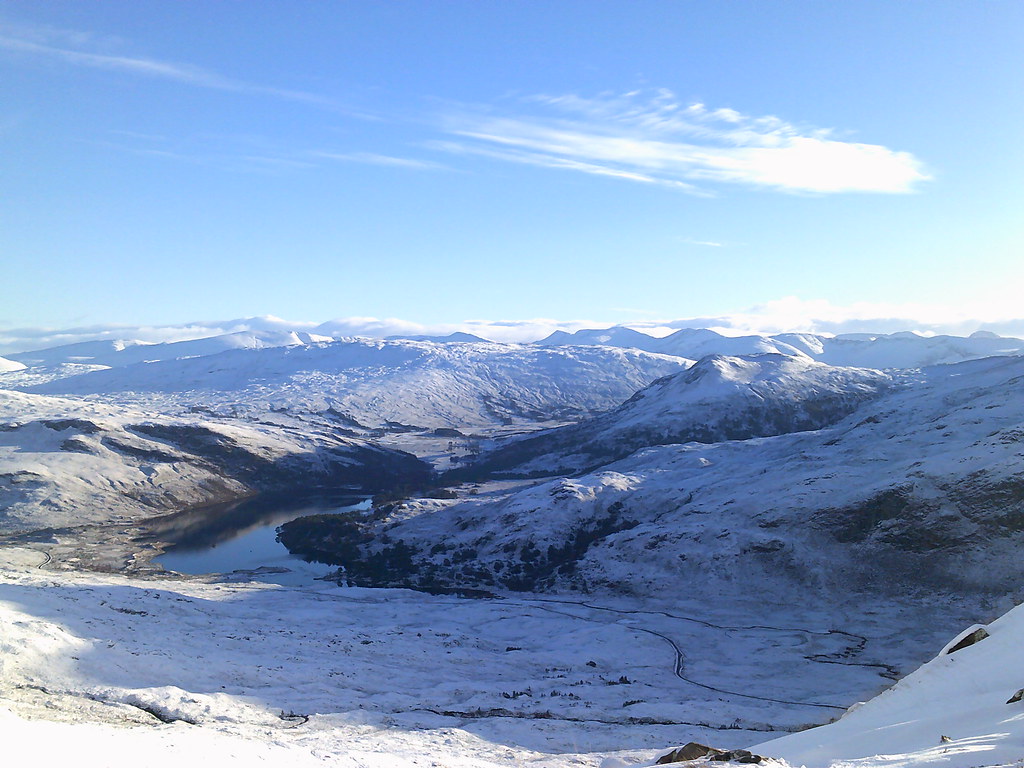 Loch Clair and the hills south of Achnashellach 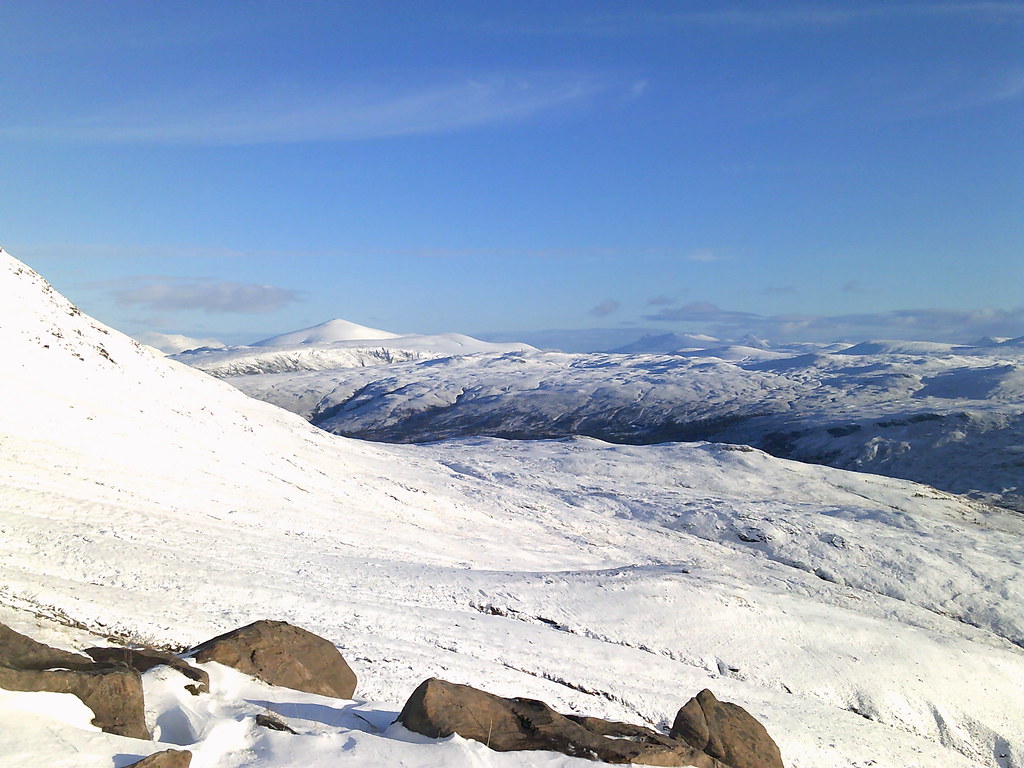 After some particularly deep drifts, the footprints came to a flattened out area and stopped - no more broken trail for me! I wondered what had made the earlier party turn around - perhaps they didn't have winter gear? I didn't think I'd need it either (I rarely use crampons until later in the season), but after wading a short distance further through knee-deep snow, I found that underneath was almost solid ice, and the newer snow wasn't consolidated enough to hold my weight. After struggling up a bit further (and only a few minutes away from the lip of the corrie), I decided to put my crampons on and get the axe out. As usual, I had left it too long and had to do all of this balanced in a stupid ledge halfway up an icy slope. Some things never change... 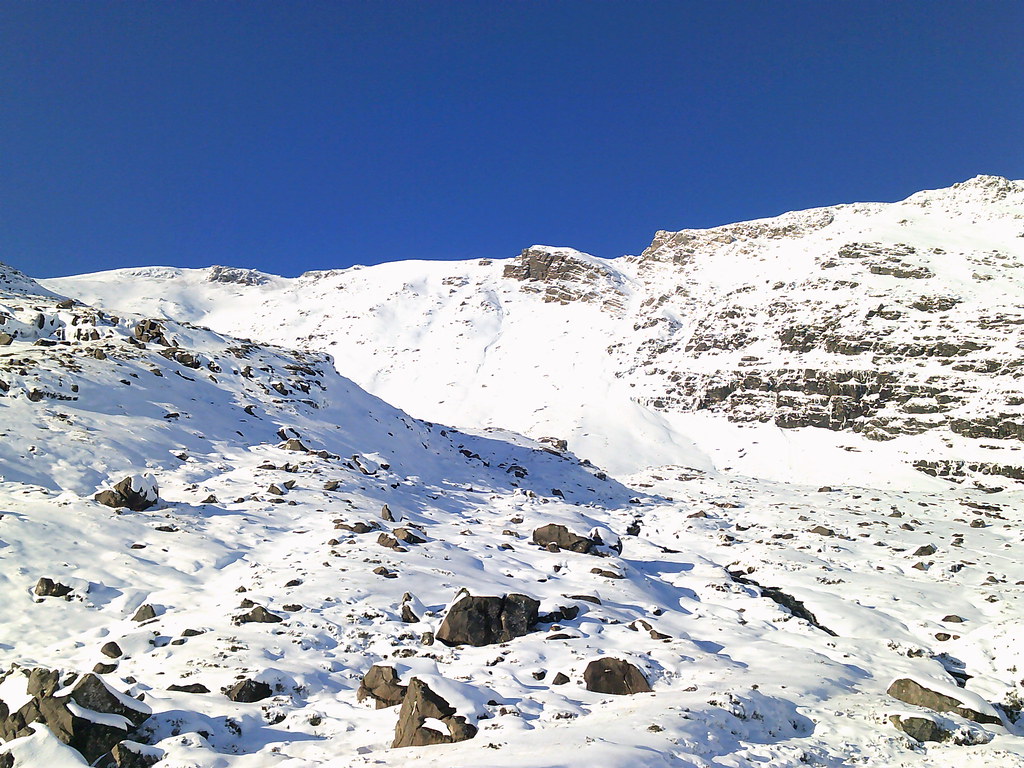 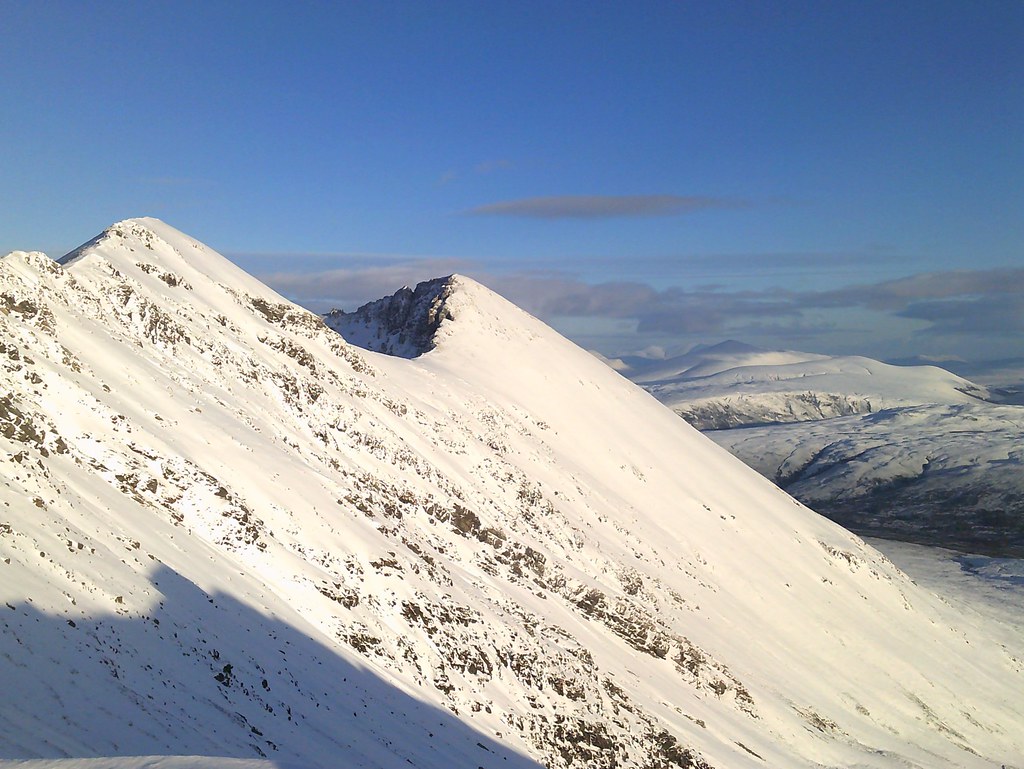 Once I had the axe and crampons out, it only took me another 5 minutes to reach the lip of the corrie. There were small cornices in some directions but nothing big and thick enough to be too disastrous if they fell. I was able to find a shallower slope that didn't have a cornice at the top of it and get out of the corrie there. This put me right next to a cairn on the ridge, and suddenly the views were in all directions instead of just one. What a day this was turning out to be! 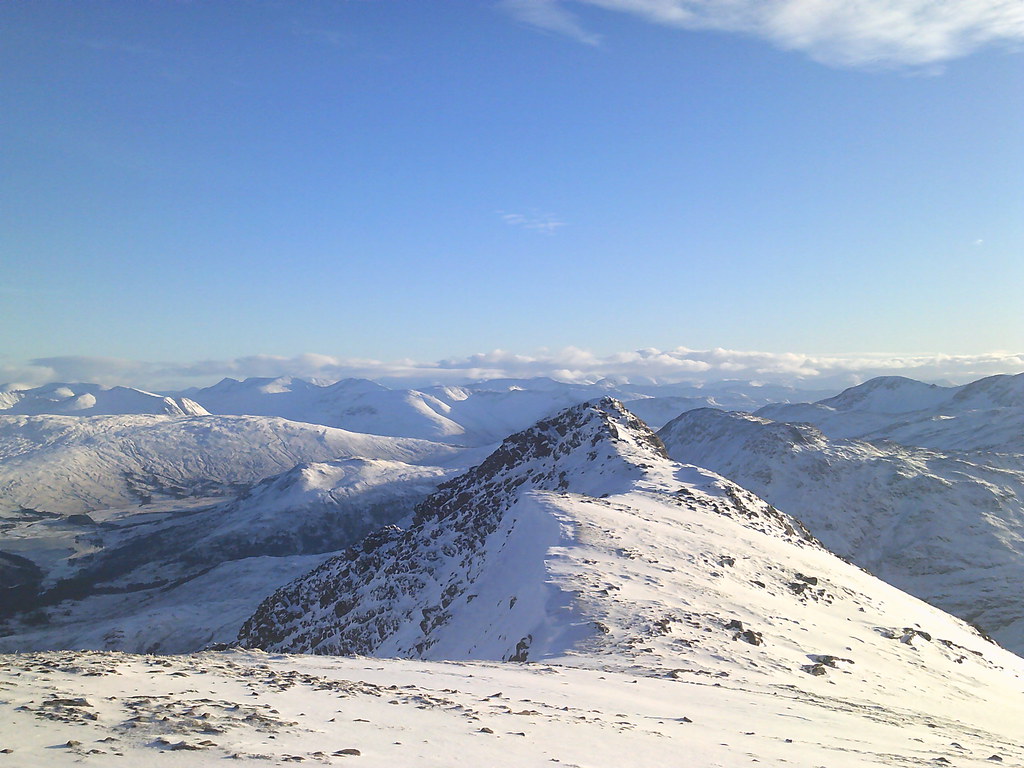 Looking back to Stuc Coire an Laoigh 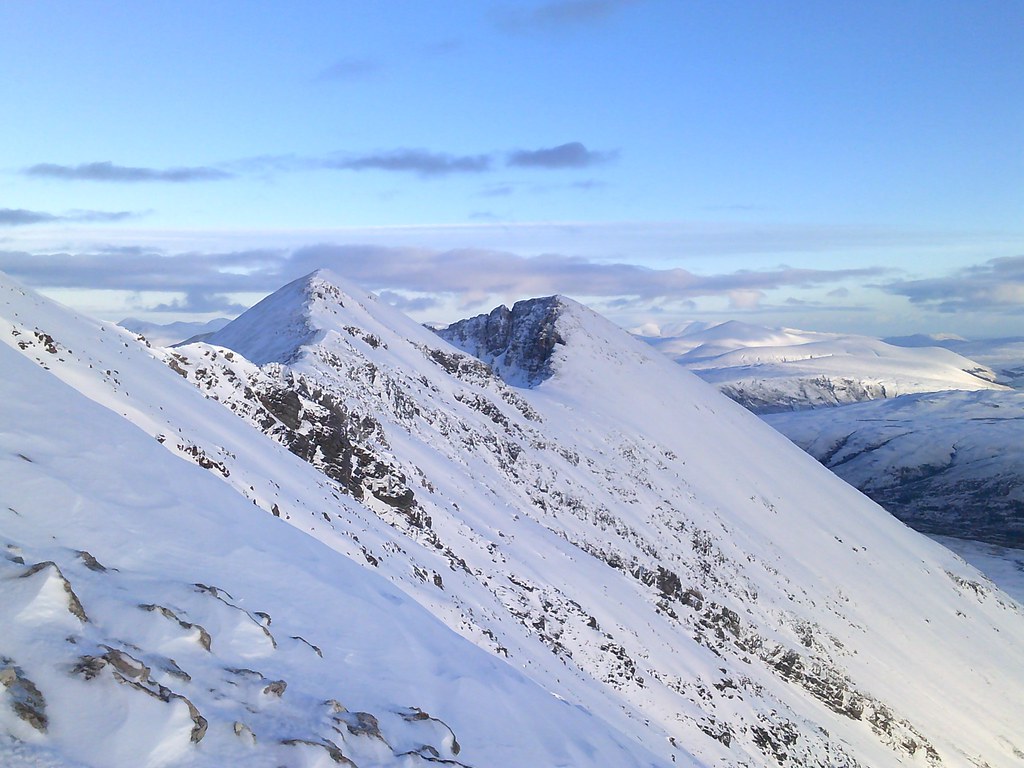 East to Sgurr Ban and Sgurr an Fhir Duibhe

I had been slow to get the metalwork out as I thought it probably wouldn't be needed once on the ridge, but I was wrong. Conditions were really good and it probably only took me another 10 minutes to reach the trig point. 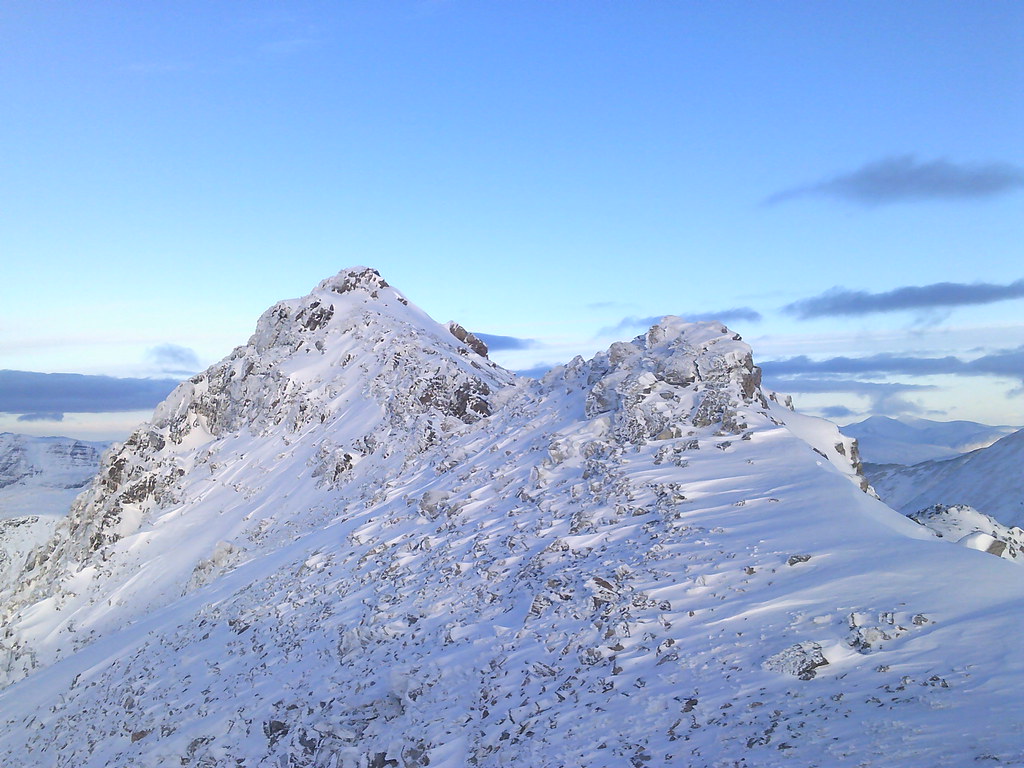 Last exciting few meters between the trig point and the summit 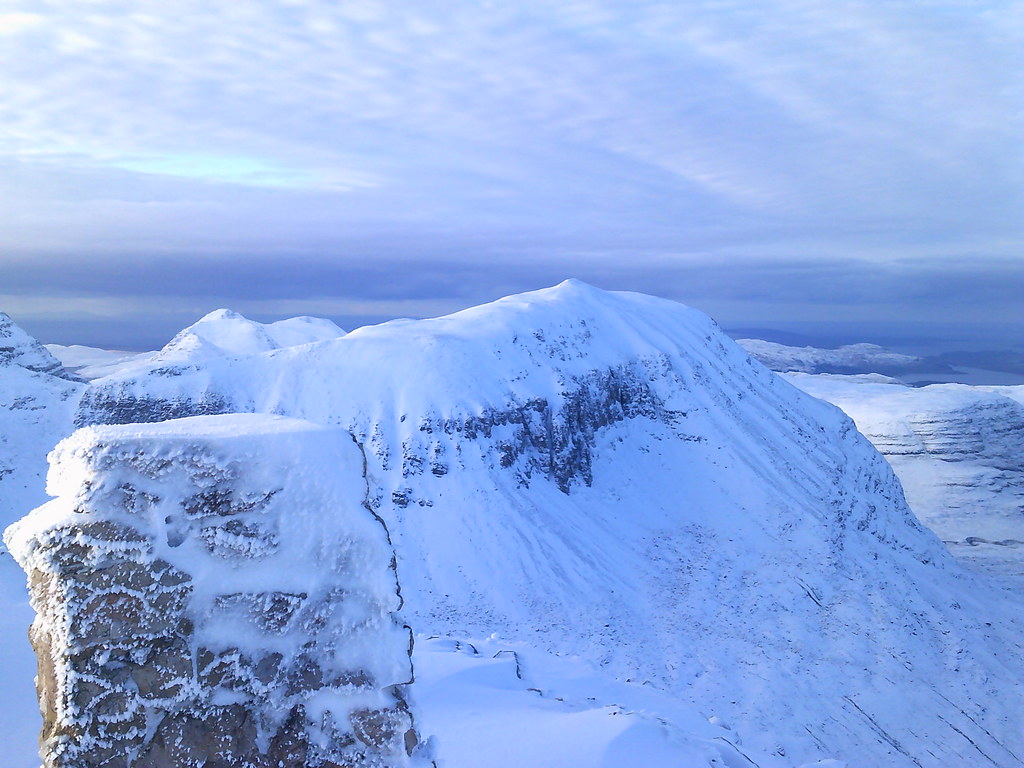 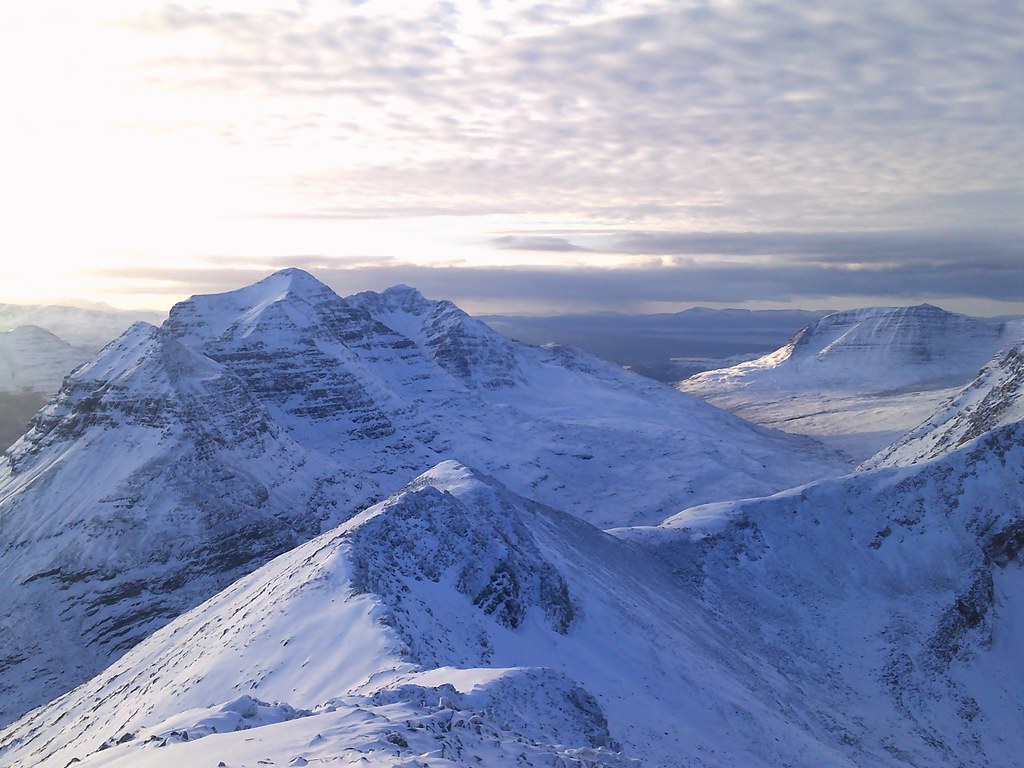 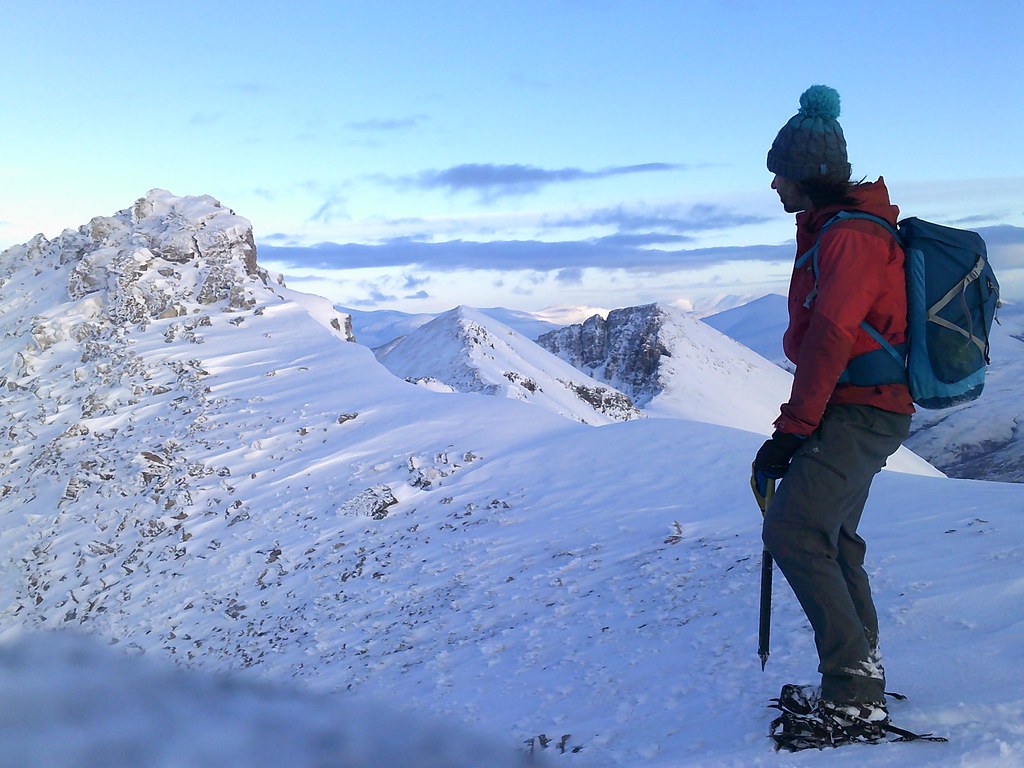 I had some memory of a couple of easy scrambly bits between the trig point and the summit, but the ice and snow made them a bit bolder! I traversed one bit to the north but it may well have been easier to go directly over it. Instead I ended up traversing steep icy slopes to get back on the ridge. Provided that the ice isn't melting then there is nothing difficult about this but I always find it unnerving to trust my crampons so much, especially when I haven't done anything like this for a while. 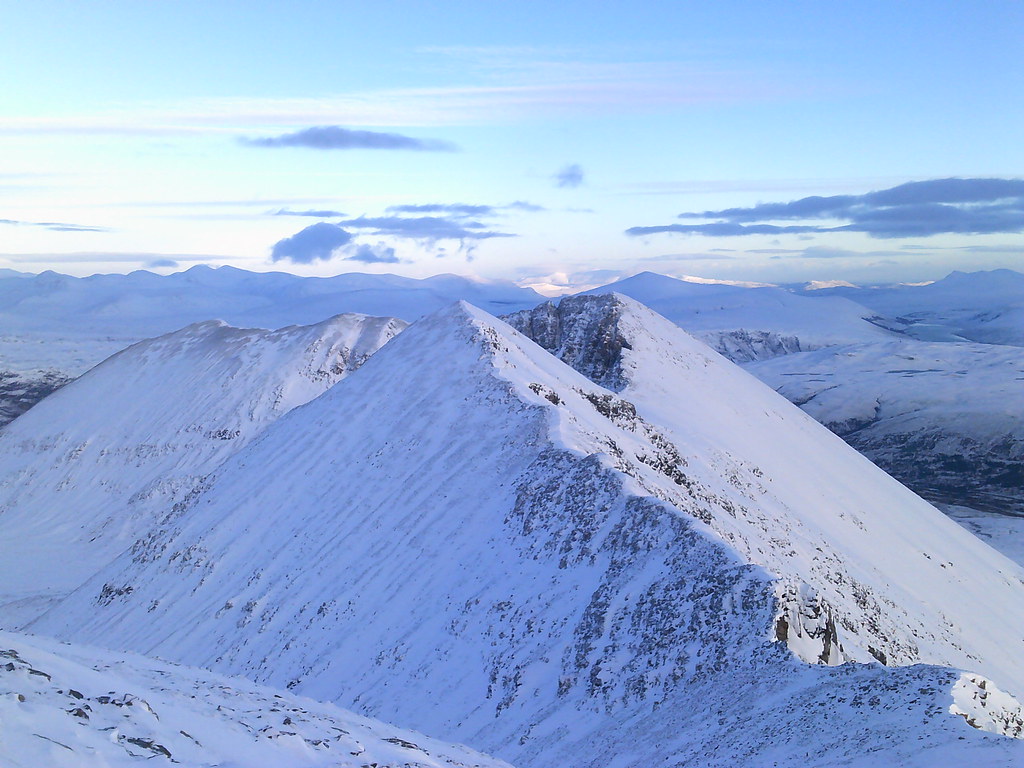 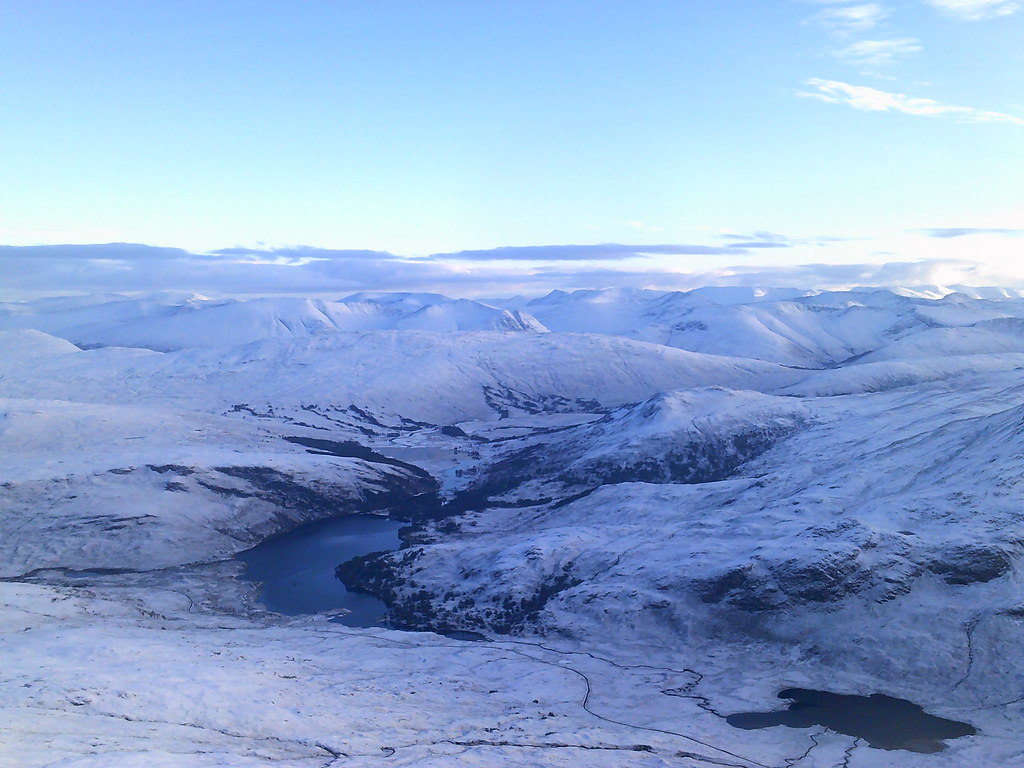 Once at the summit I was buzzing with nervous energy - not the place to trip over my crampons once the more awkward bits were out of the way! This was a fantastic day to be out - even though I wasn't doing a particularly exciting route or staying on the ridge, I was pretty chuffed. I decided to retrace my steps to the trig point before having a break. 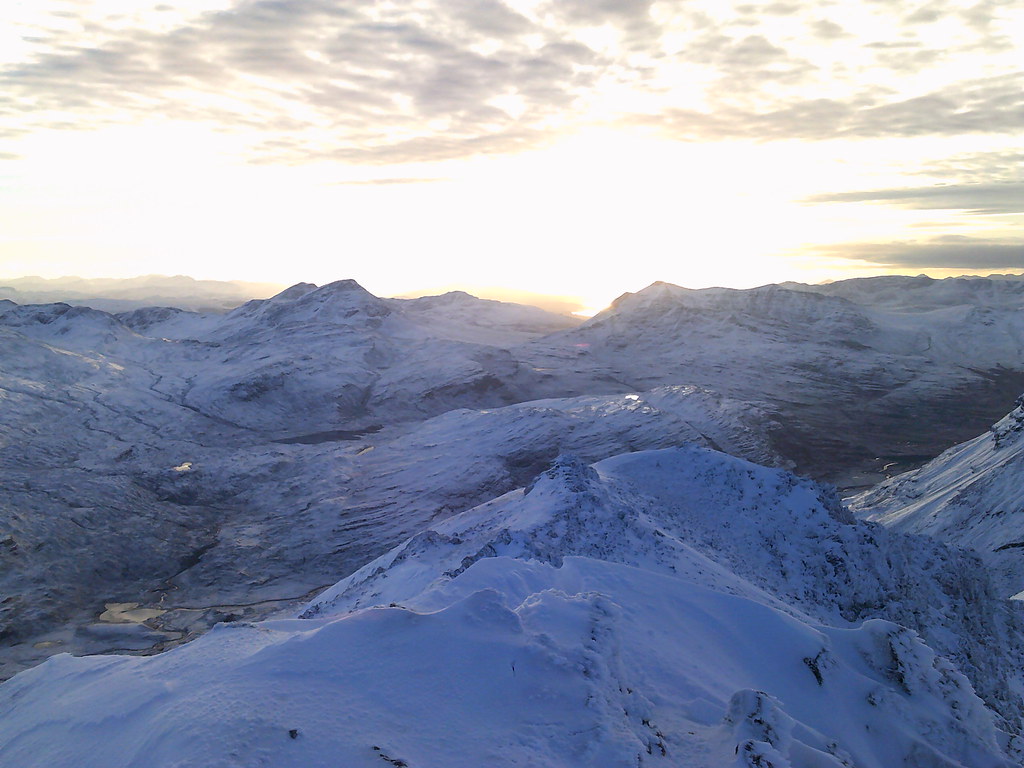 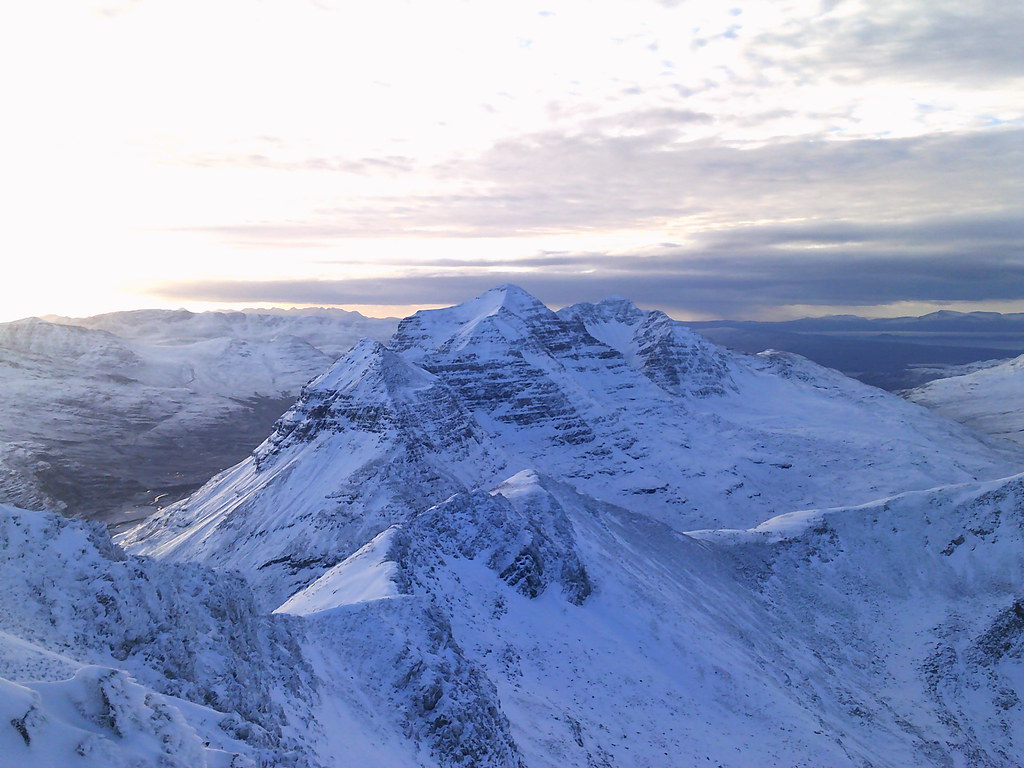 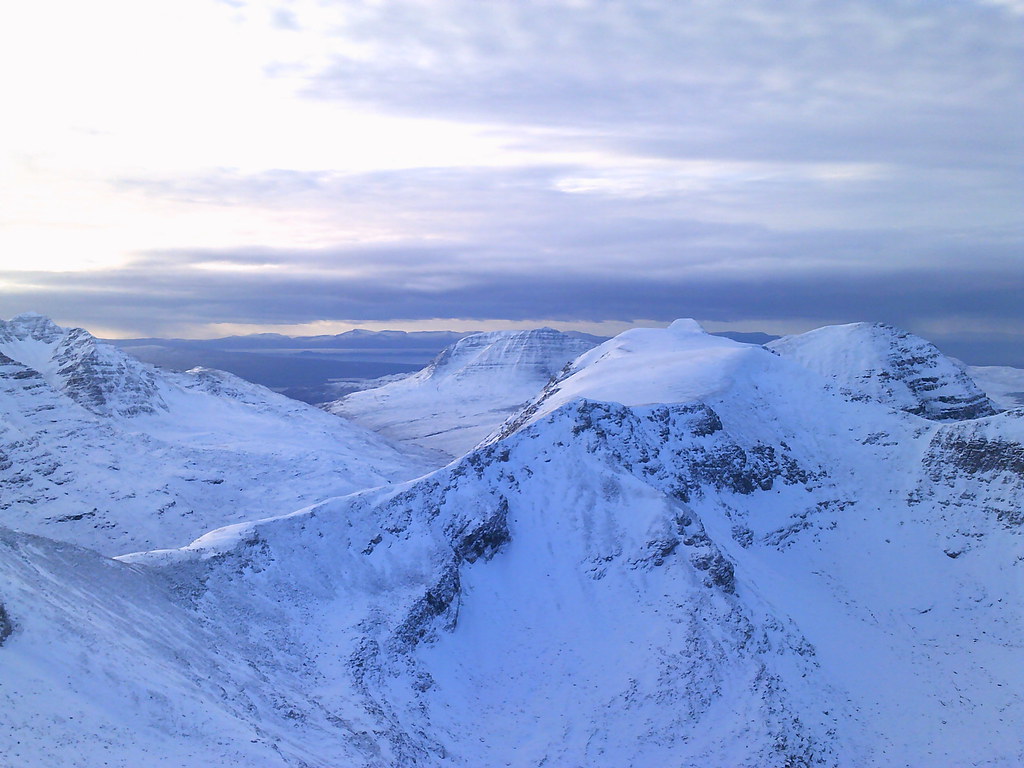 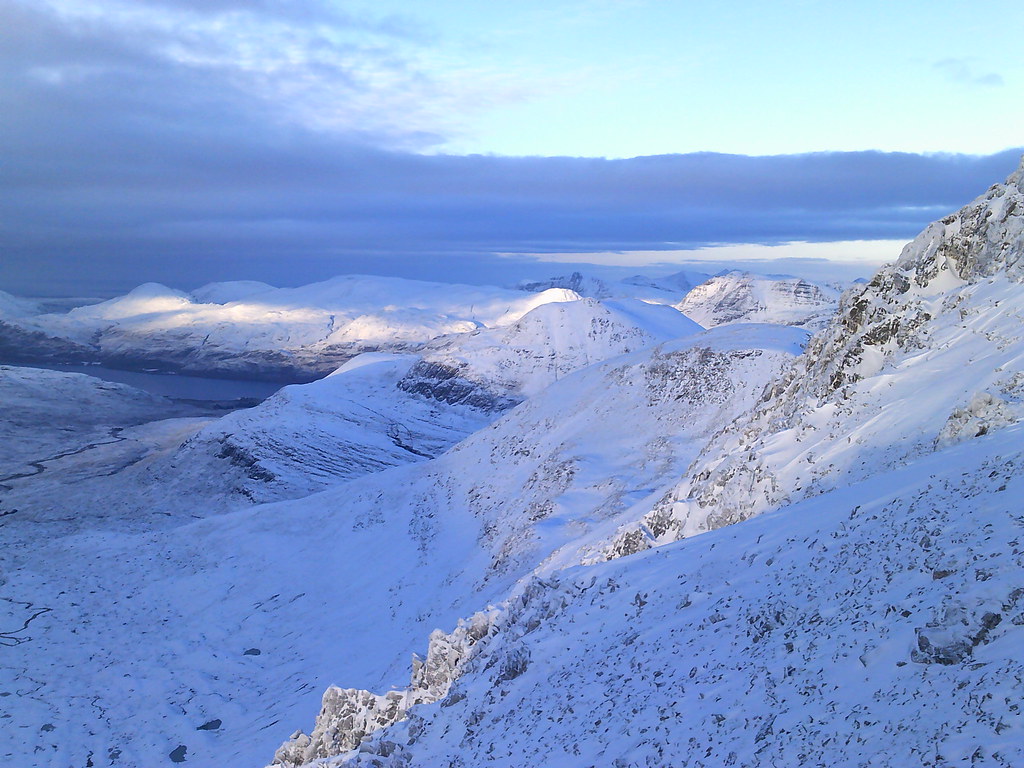 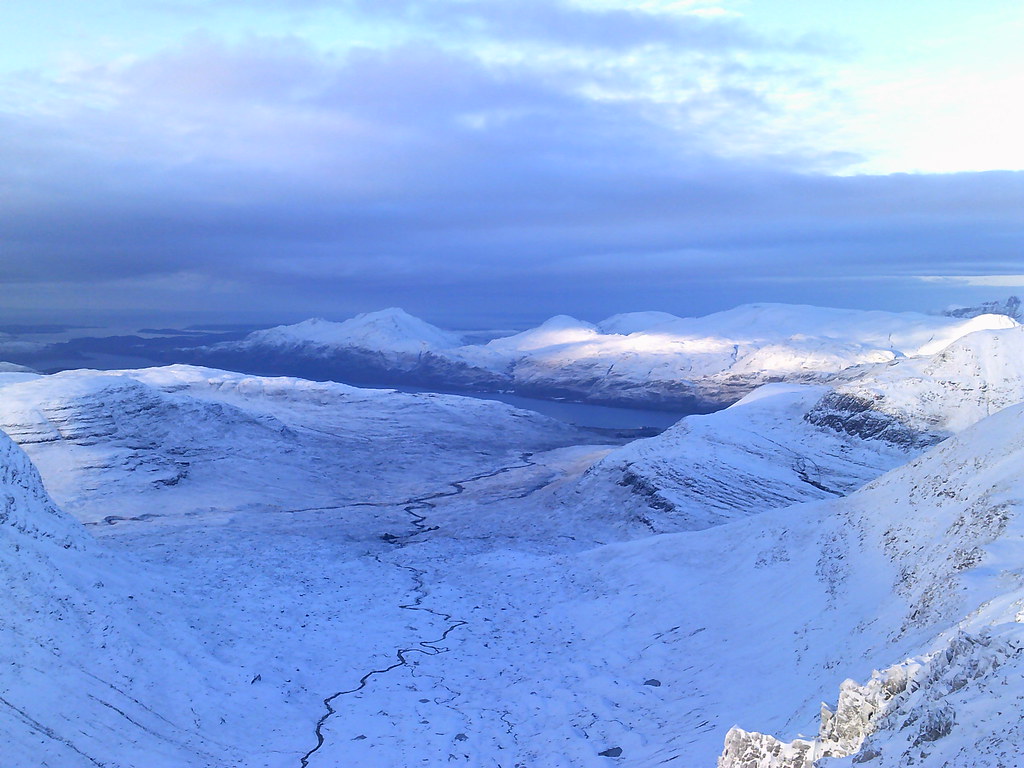 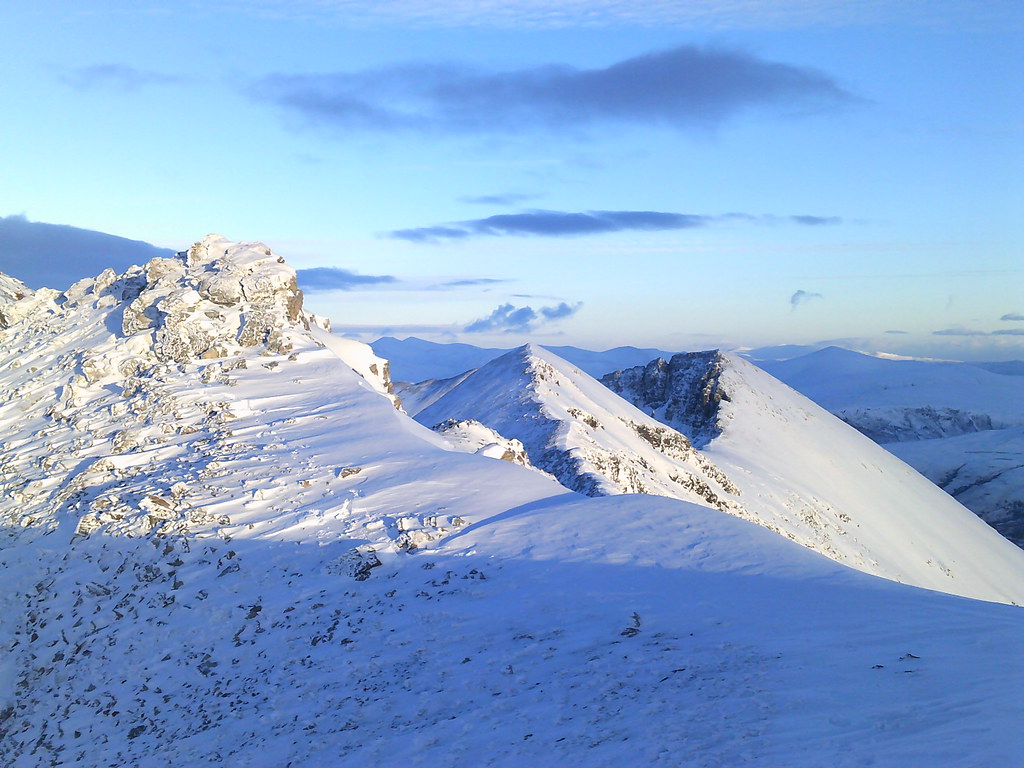 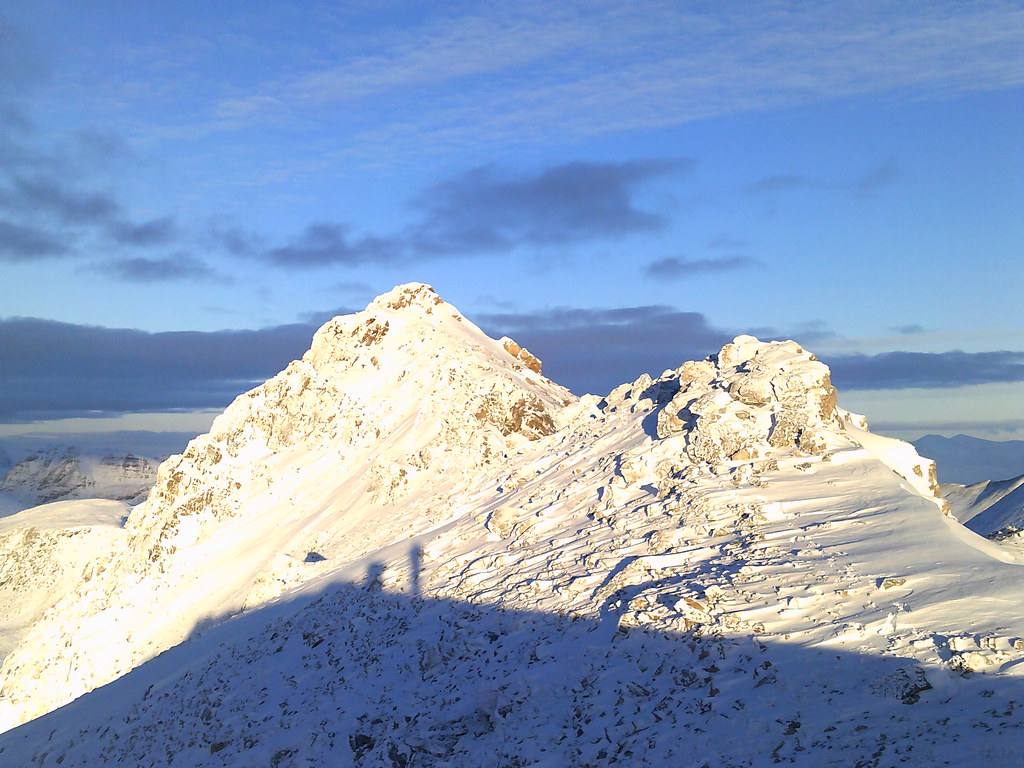 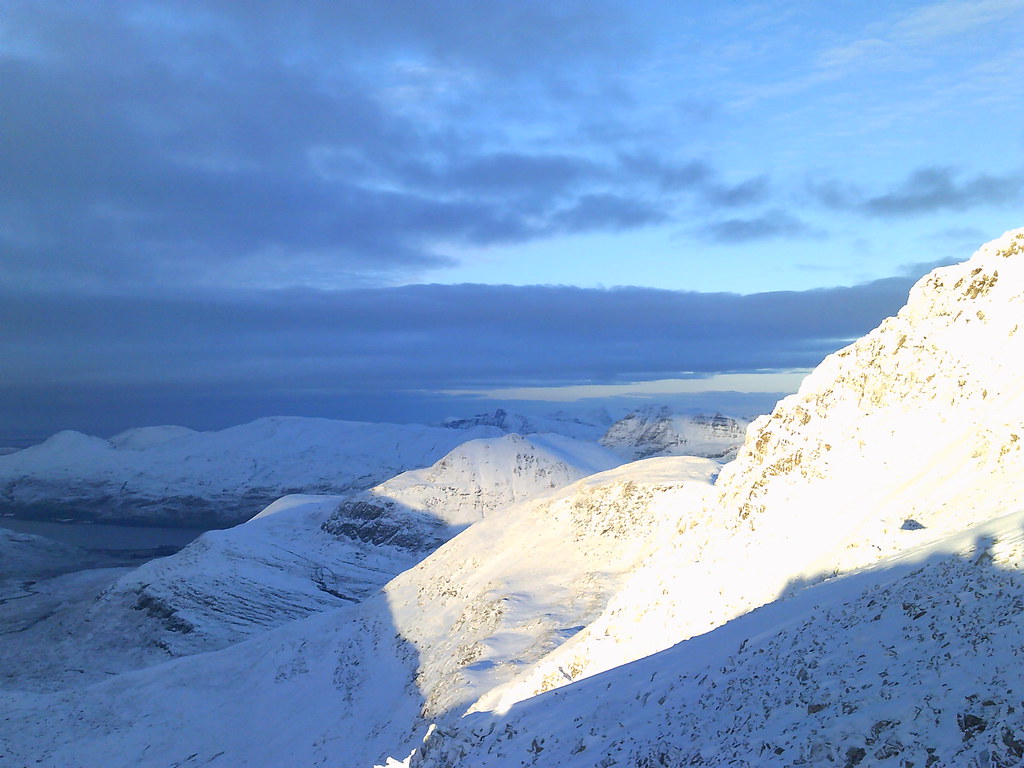 Sunshine and shade across Fisherfield

There was some poorer weather and showers moving in from the west, but I didn't think it would reach me before I was down. I could see a couple of other people coming over from Coinneach Mor (the only others I had seen out all day) but I didn't have time to wait for them to arrive. I made quick work of the ridge back to the cairn and shifted down the corrie at about 5 times the speed I had come up it. 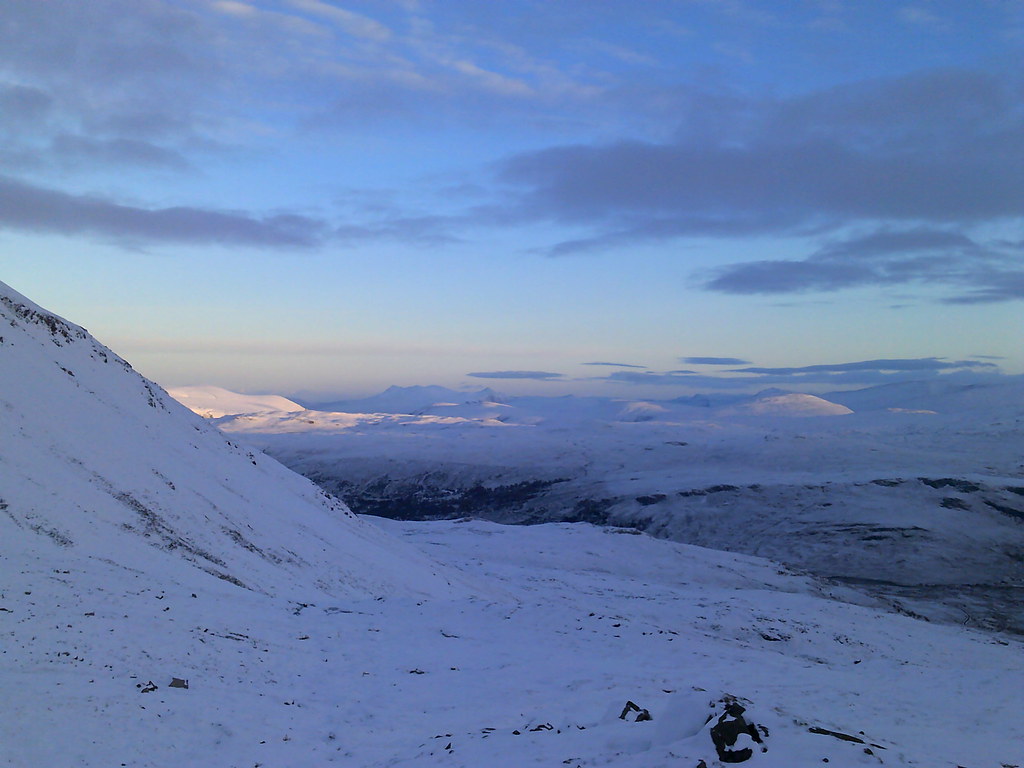 Fionn Bheinn catching the light from the mouth of the corrie 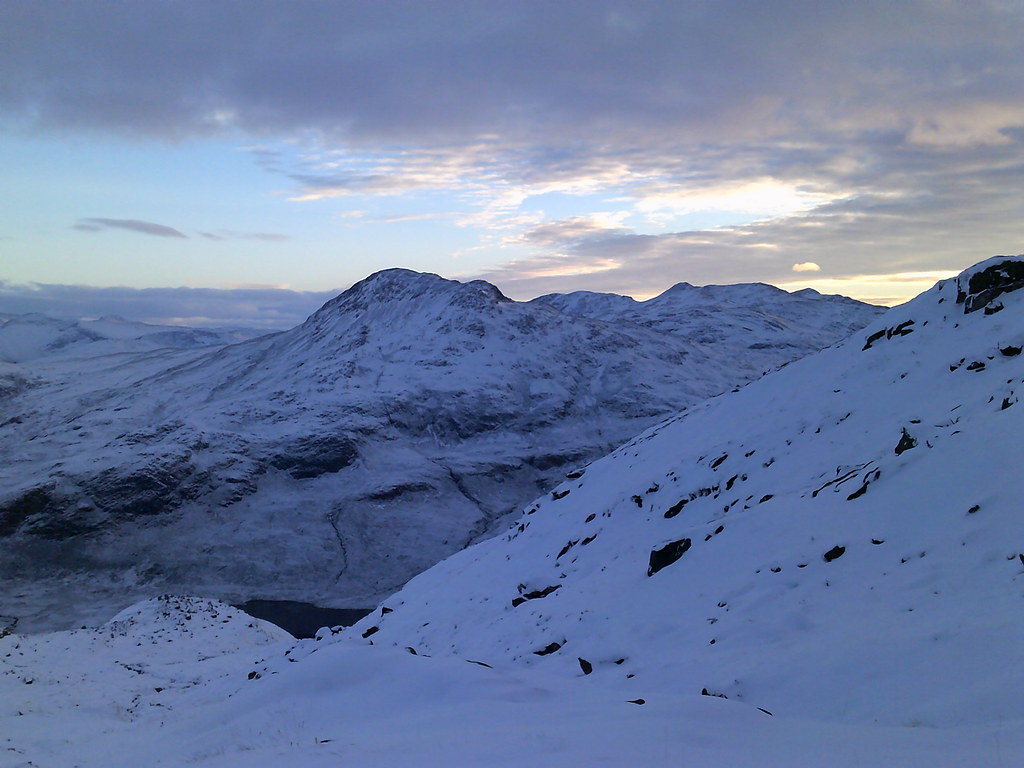 Sgurr Dubh from the mouth of the corrie

I took my crampons off at the foot of the headwall. It was a straightforward walk from there downwards, watching out for the odd slippy bit of path. The sunset was hidden away behind other hills, but there was some excellent light on the clouds. 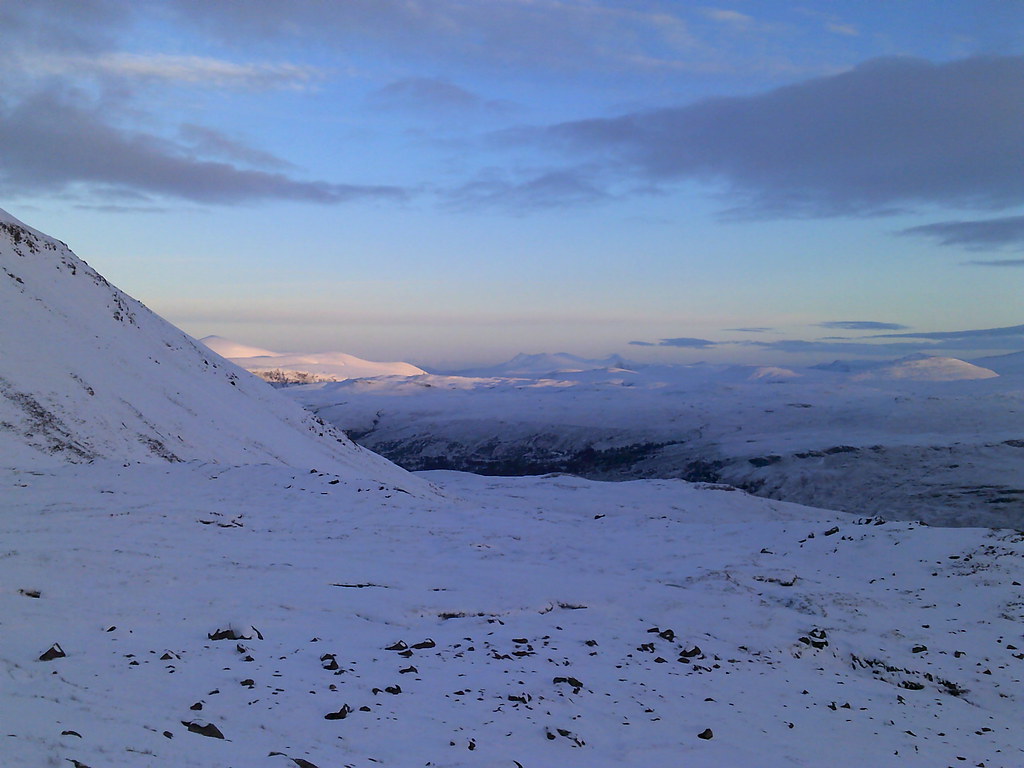 Fionn Bheinn and Sgurr a Mhuilinn 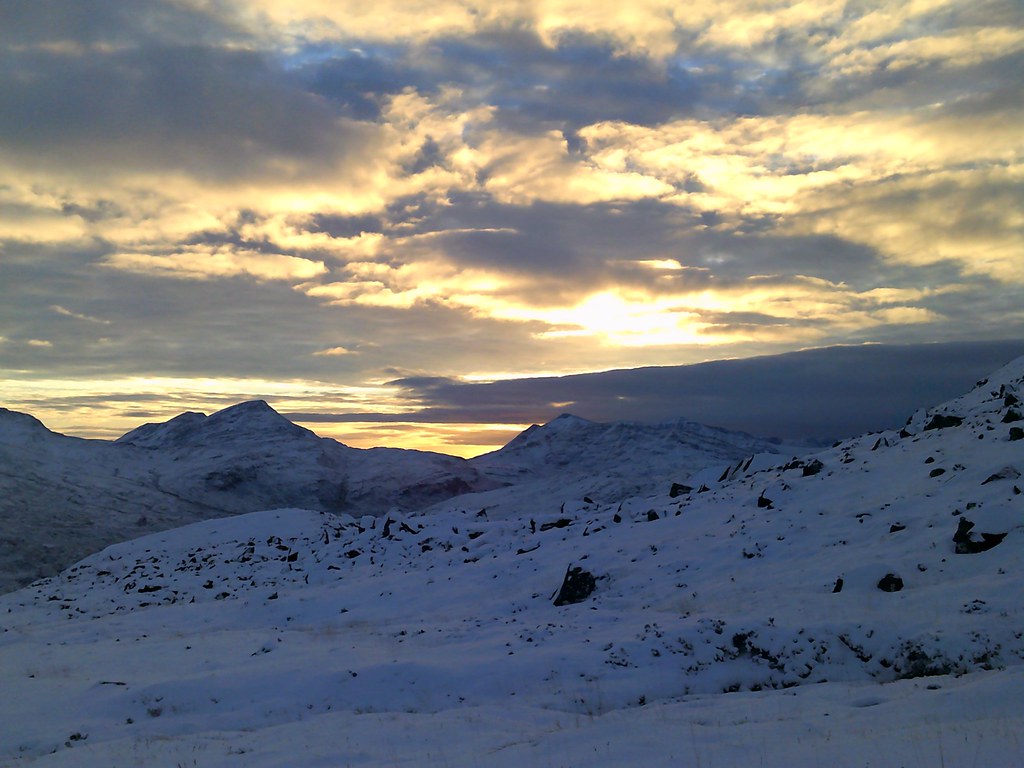 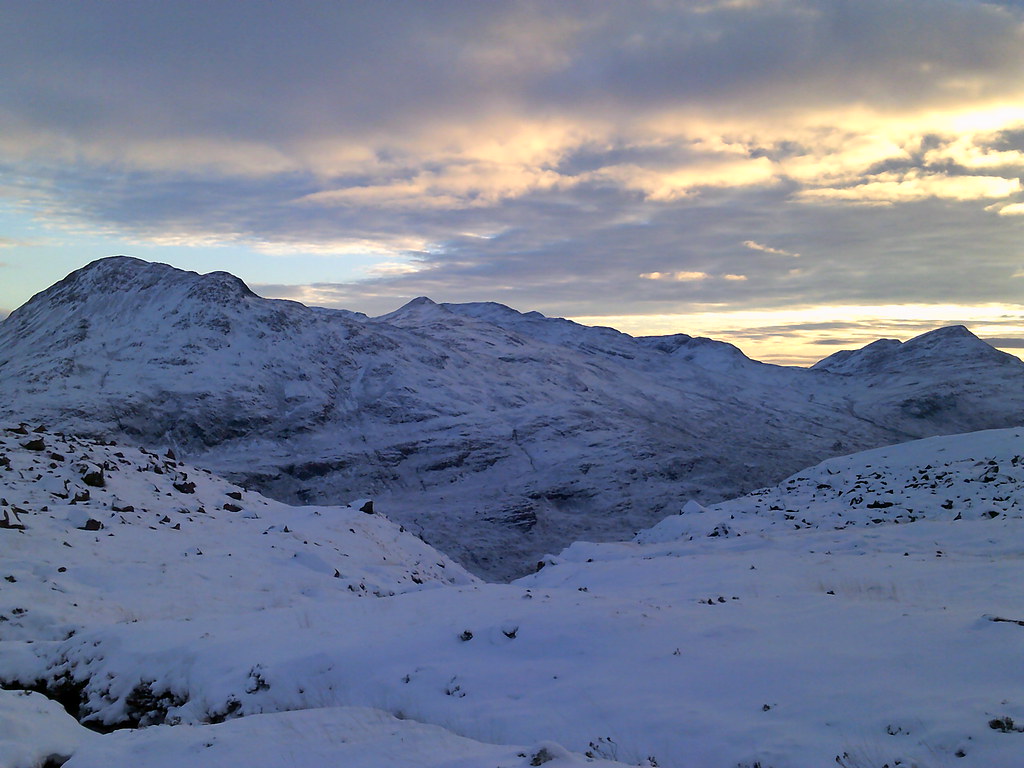 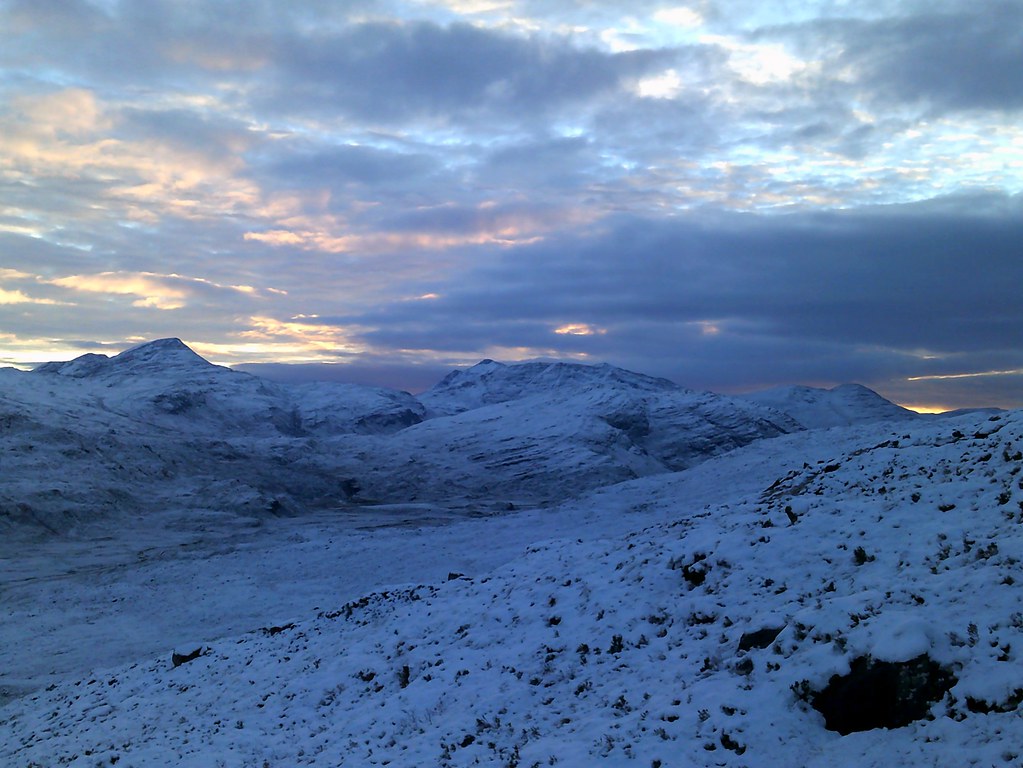 Back at the carpark, Jackie hadn't come back yet so I spent the next 10 minutes walking down the road until I met her driving the other way. Of course she would rather have been on Beinn Eighe if she could have been, but she'd had a brilliant day around Loch Coulin as well.

We went over Stuc Coire an Laogh in full winter once, and there was actually a little awkward bit over a sort of pinnacle, which wouldn't even register in summer. I seem to remember it felt rather exposed. Probably wise to do what you did!

Why is it that we all do exactly the same thing; wait until its just a bit tricky and dodgy to hop about trying to sort crampons out on some tiny little ledge or similar. I've been doing the same for decades now!

Absolutely stunnin'!!! Lucky burger. The last time I was up there in winter my companion was pleading with me to call the Mountain Rescue!!!

"As usual, I had left it too long and had to do all of this balanced in a stupid ledge halfway up an icy slope. Some things never change..."
We must be blood brothers

Sometimes these shortish up and downs are really rewarding. A steep climb up there though.