Had originally been planning to do some munros today, but the weather wasn't too promising so decided to tick off a local Marilyn. As I like doing loops rather than up and downs, I looked at the OS map and apart from a short journey through the woods (more later) there seemed to be track most of the way. I parked in a road just off the B9176, where there seemed to be a number of parking options. Started off up the forest road which was excellent

Cnoc Corr Guinie.gpx Open full screen  NB: Walkhighlands is not responsible for the accuracy of gpx files in users posts
Soon turned right up what was more of a landrover track rather than a logging road, which was still an excellent path. After going up gradually for about 2.75 km, came to a point where there was more of an ATV track up through the wood to the NW so I took that going up for a short while before getting to the summit of the hill. Once on the summit the track ended and there was a short walk NE over grass tussocks to the cairn. And the limited views at the top because of all those "pesky" trees! 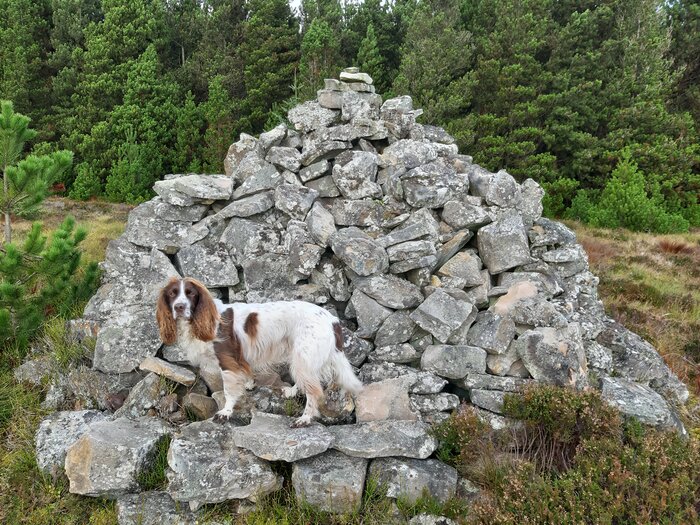 Dillon at the top cairn 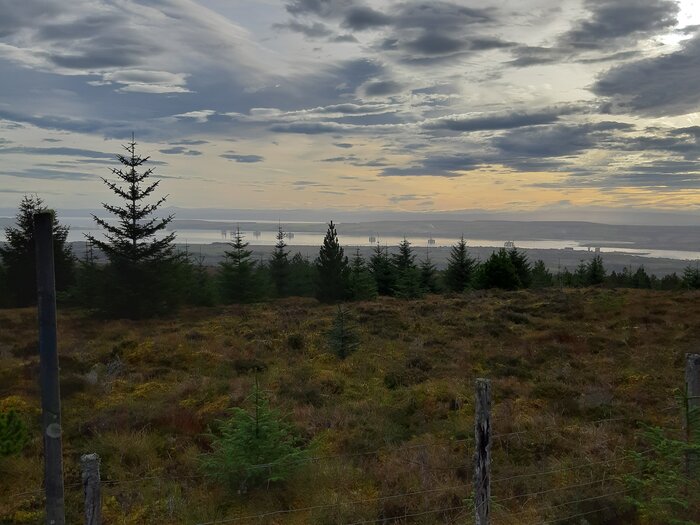 Looking out to Cromarty Firth 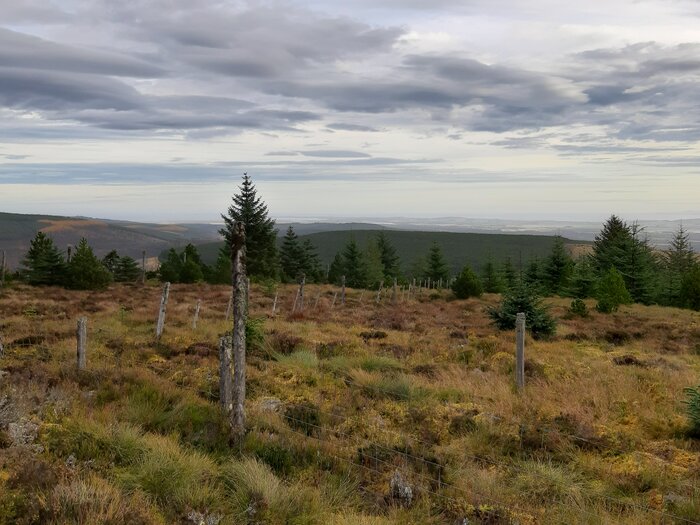 Looking further out to coast

At that point I returned back to the end of the ATV track on the summit. Opposite to where I had come up there was a small "natural" firebreak between the trees, going NW which I thought I could take to get through to the track on the other side on the hill, rather than taking one of the firebreaks marked on the OS map. With hindsight, it would have been better to go down one of the marked firebreaks because although more walking they were big and wide. The one I chose, although good at the start, narrowed rapidly and then had quite a lot of trees down blocking it which meant several excursions into the woods to get around them!

Not too long and I was out on the other side of the hill and picked up a very good logging track going downhill. 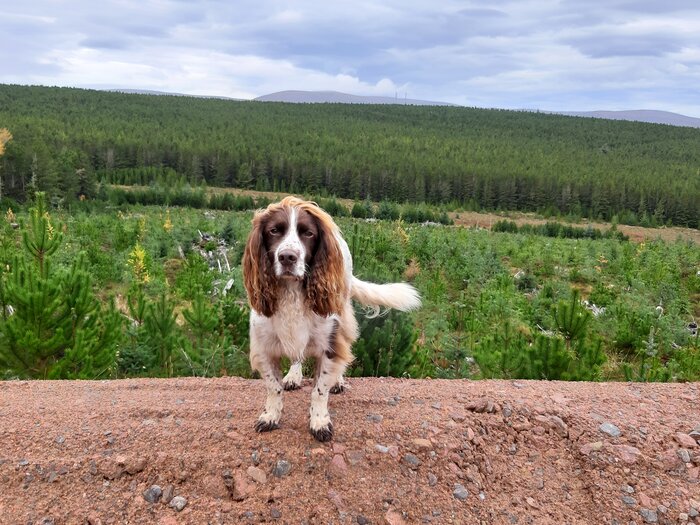 Looking northish from the other side of the mountain 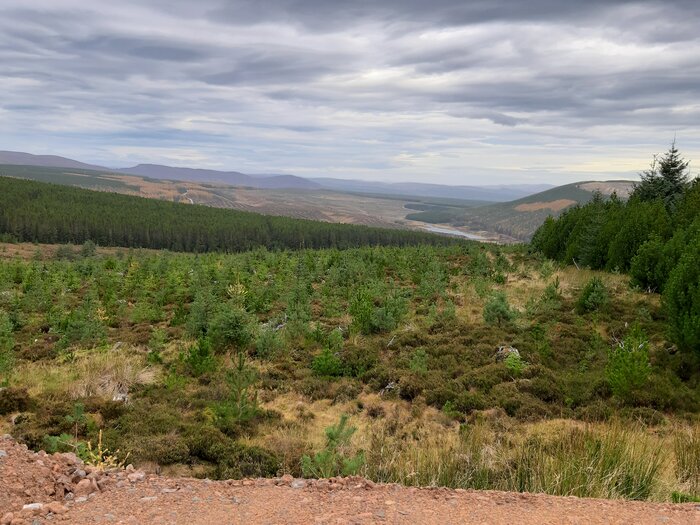 Looking towards the Struie ridge and Loch Sheilah in Strath Rory

Followed the logging track all the way back to the car which was about 6 km, not the most inspiring track but certainly good for walking. The larch trees had been shedding their needles and in places the track was almost yellow. 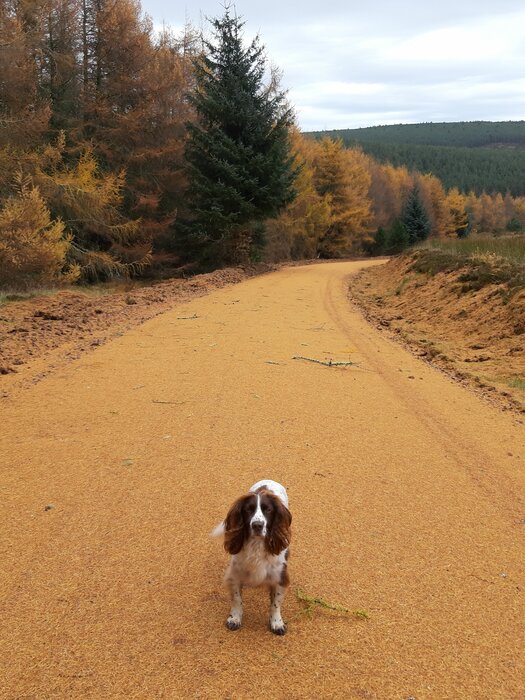 Dad have we travelled to Oz!

But the most amazing thing about the whole walk was, despite there being lots of rain recently, Dillon somehow managed to avoid getting filthy. This never happens on a decent length walk, normally he needs a post walk dip in a river to clean up. 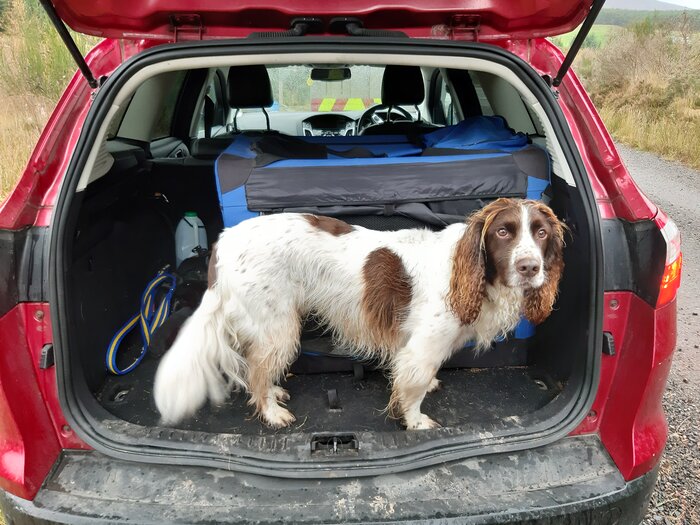 Look how clean I am. Mum is going to be so pleased when I get home!

All in all another good day out

I did this one as an up-down in a lot of snow, so it's nice to read your report and see what it looks like properly!

Users browsing this forum: ajm84, Col of the wild, GreyhoundofRydal, malky_c and 33 guests