In the last days of November eastern Scotland faced Storm Arwen. Northern and western Scotland didn't experience the full blast of the storm, just the edge of the bad front, but it was enough to turn the landscape white. Ahhh, the first snow.

We talked about visiting Torridon (always fun in winter conditions!) but forecast was slightly better for the north-eastern corner... Or so we thought. In the end, we'd probably been better off heading for Beinn Damph, but Càrn Chuinneag proved a nice, easy hill for a cold, snowy day. We managed to time our ascent right and reached the summit as it was clearing. So here it comes, my first winter report for season 2021/22!

We had been to this Corbett before but never in full winter conditions. The Glencalvie route might be long-ish for a short November day, but it involves 4km of walk-in (and out) on a decent estate track plus the ascent follows an excellent stalkers path. Even in whiteout conditions, this is a relatively easy hill to tackle this time of year.

Track_CARN CHUINNEAG 17.9KM.gpx Open full screen  NB: Walkhighlands is not responsible for the accuracy of gpx files in users posts
The small car park in Glencalvie was empty - no one was stupid enough to drive into this remote location on a cold, Sunday morning 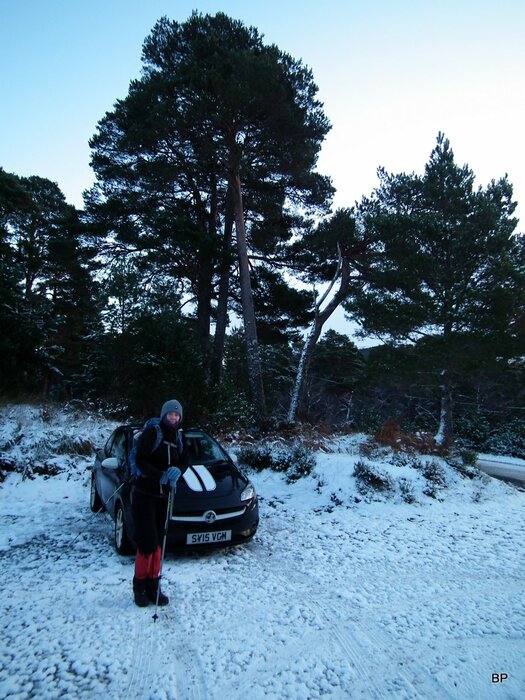 Back to winter clothing...

The morning was crisp and relatively quiet. We expected snow showers, but so far they haven't materialized... 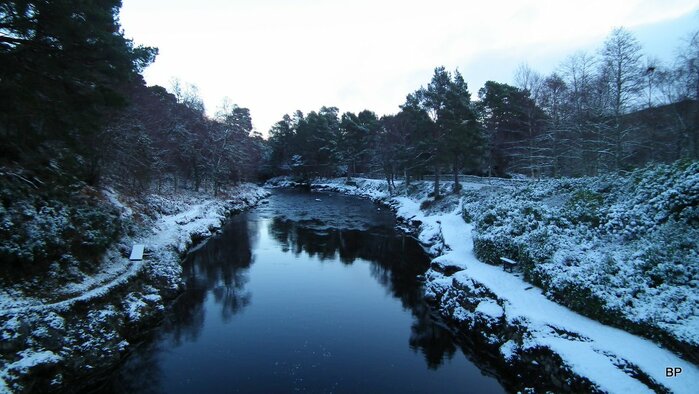 Winter sunrise from the estate track... 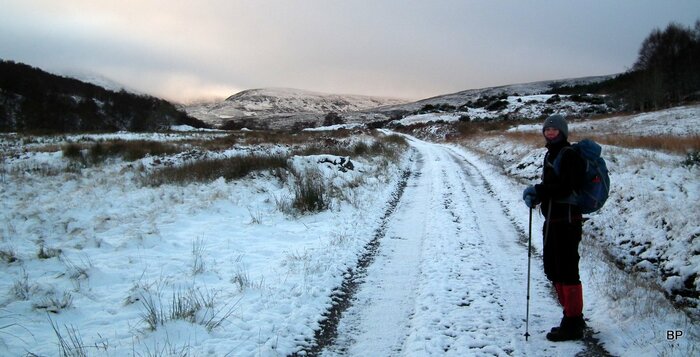 We noticed clag still clinging on to the summit of Càrn Chuinneag, but the forecast said it should clear by midday, so we had plenty of time to climb this hill.
As we marched up the glen, the northern cloud caught up with us and soon it was snowing heavily. Not that we minded it so much. Let it snow! Let it snow! 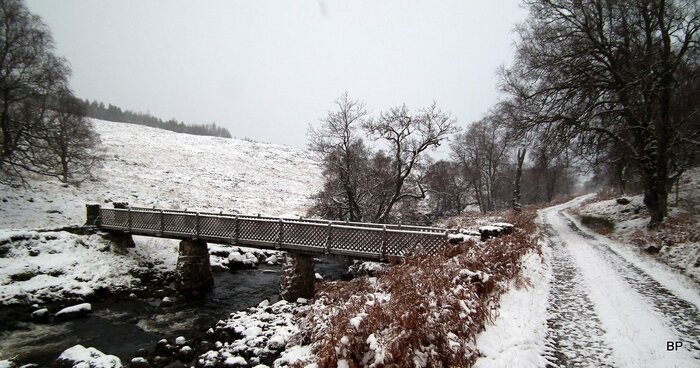 The bridge to Diebidale Lodge

We spotted a small herd of deer hiding in the nearby woods. This area is pure stalking country and we were glad it was well past the stag shooting time! 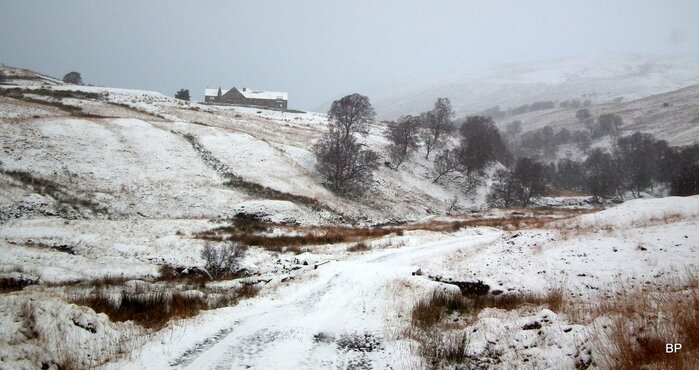 View back to Diebidale Lodge

The start of the good stalkers path up the northern side of Càrn Chuinneag is easy to locate even in a snow shower: 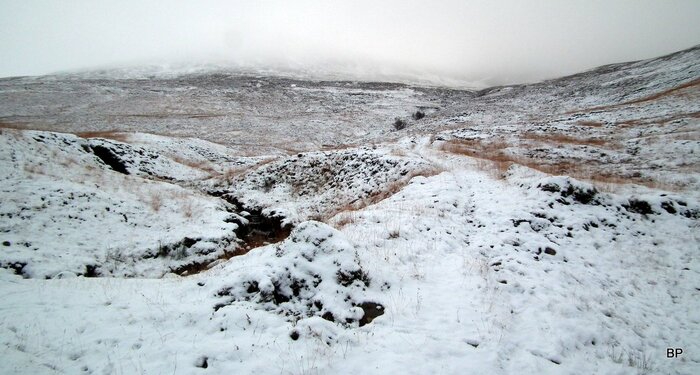 The summit is up there somewhere!

The path zig-zags up the northern slopes of the Corbett... 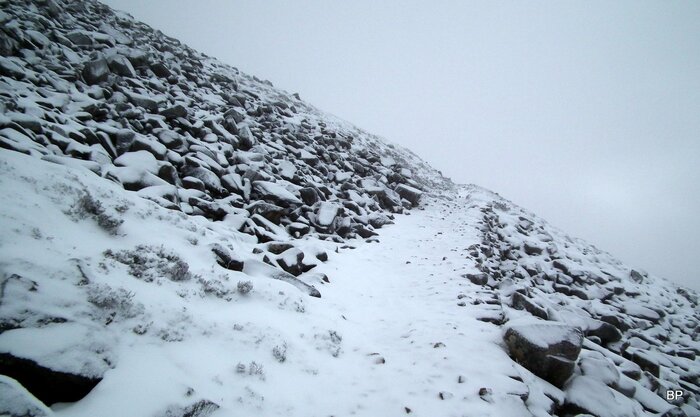 ...and in whiteout, small cairns marking the turns are very helpful: 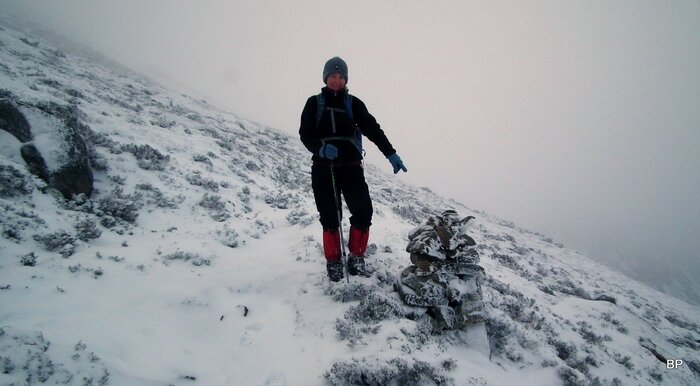 We were 2/3rds way up when the thick clag started to break, giving us hope for some nice views. I stopped to dig up my camera... 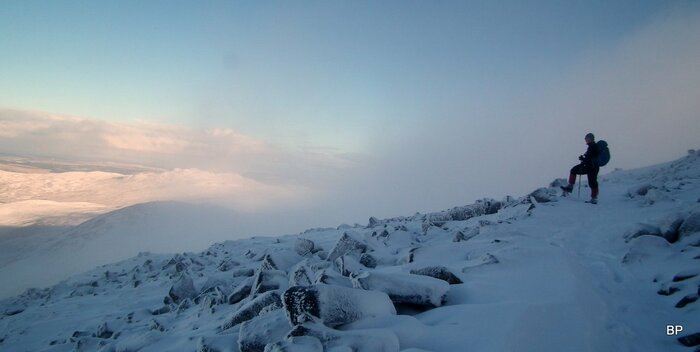 ...and noticed a pair of of "little snow people"

They didn't have a care in the world, just walked about on the snow an probably enjoyed the views, too 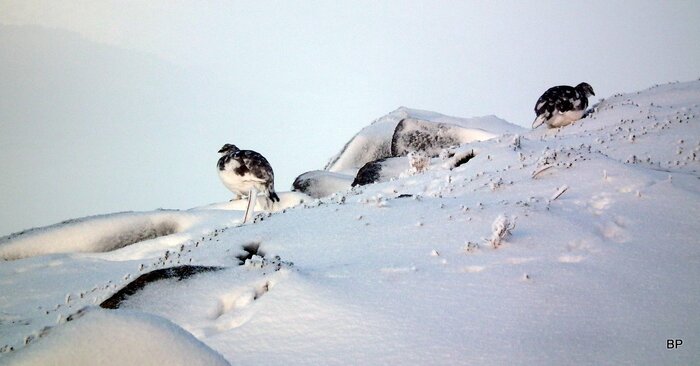 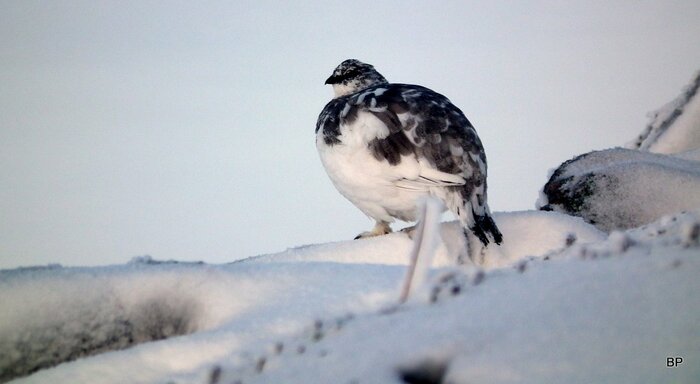 What we (and the ptarmigan) were admiring: Glencalvie emerging from the mist. 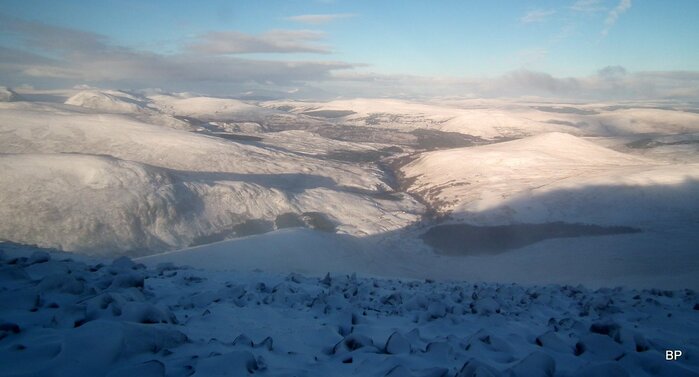 Looking north from the upper end of the stalkers path, over Alladale hills to more distant tops of Assynt: 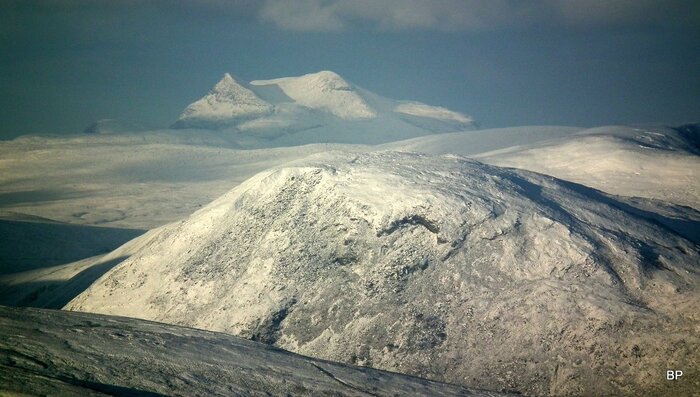 We left the path at its highest point and headed straight up the eastern top which is higher albeit only by 10m. Weather has cleared by now and we enjoyed the final climb despite the chilling wind: 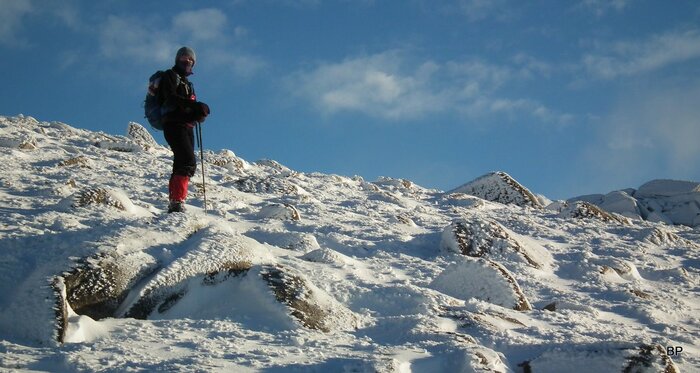 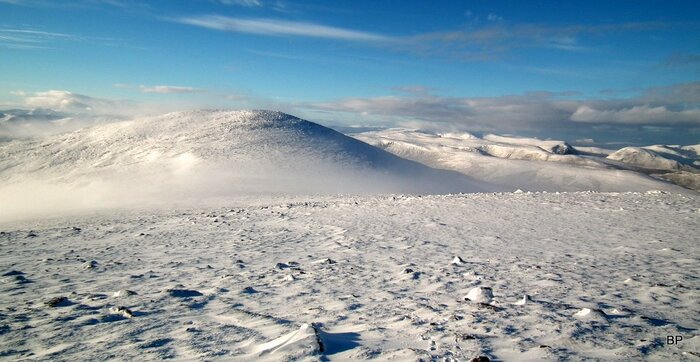 We had traversed both tops during one of our previous visits, but today was too cold and windy to consider a longer walk, we intended to retrace our steps (less hard work in deep snow). But first, a trigpoint snap: 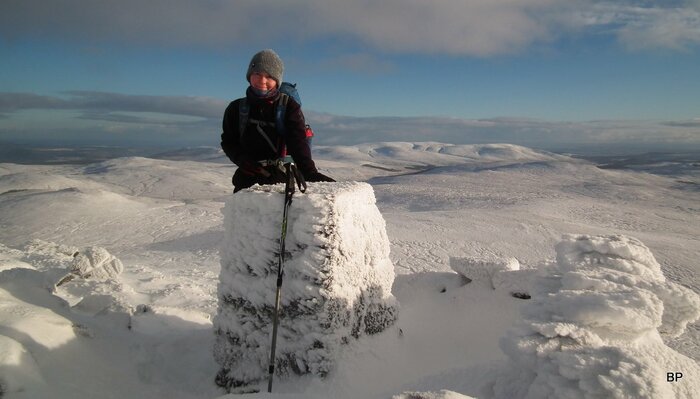 He Who Always Knows It All Best pretending to be a bank robber. In reality, he was complaining about frost pinching his nose 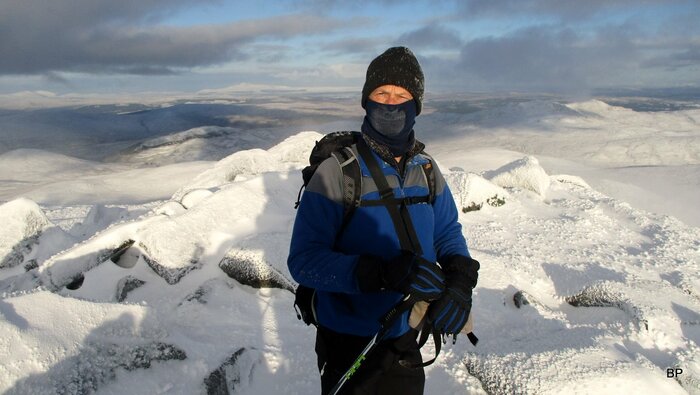 Beinn Tarsuinn to the east: 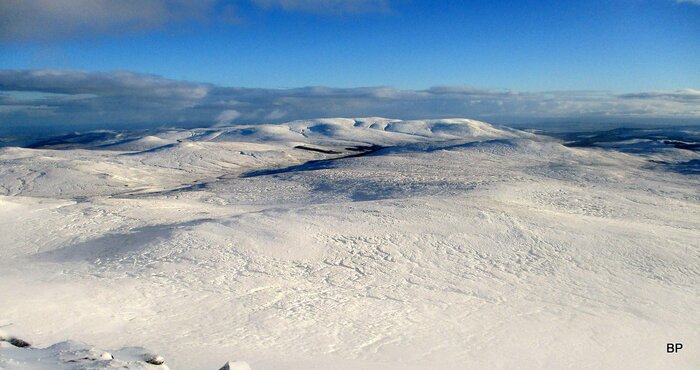 Wee Lucy in her winter gear: 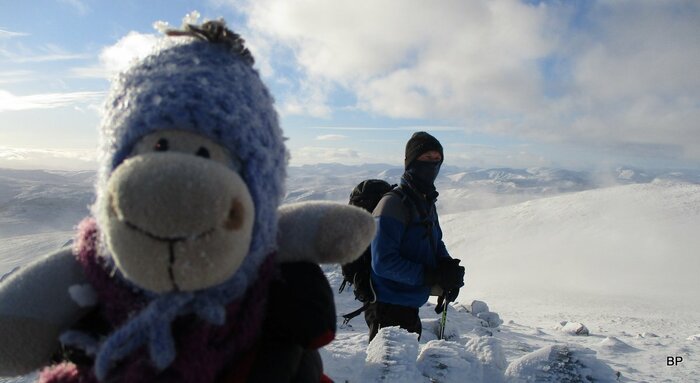 Kevin made the mistake of placing our flask in snow for a few minutes, as he was digging in his rucksack for the sandwich box. As a result... 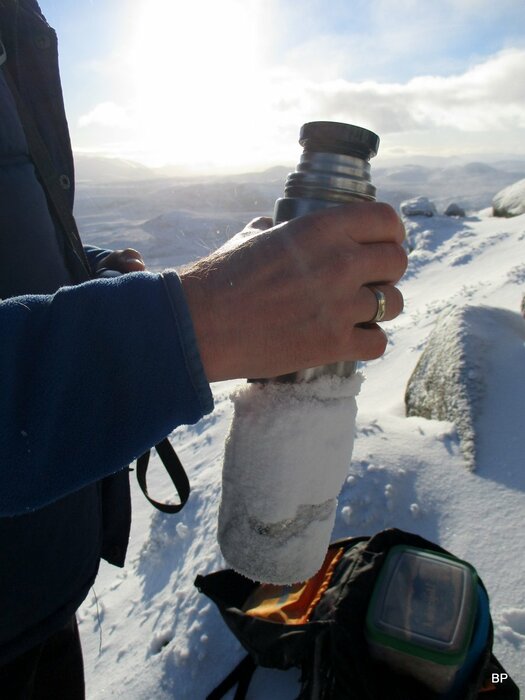 Despite the freezing wind, we spent some time on the summit, enjoying the winter wonderland. First proper snowy walk this winter season - and hopefully not the last! 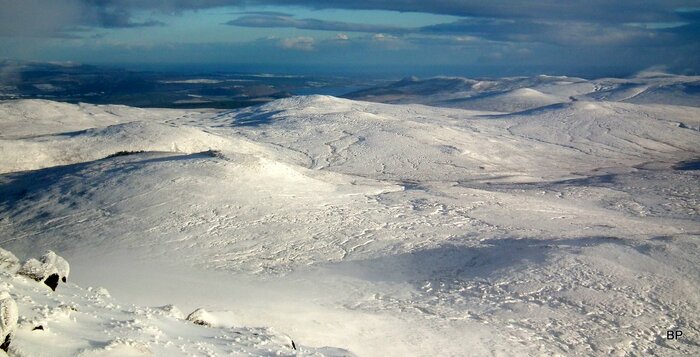 Kevin busy with his camera: 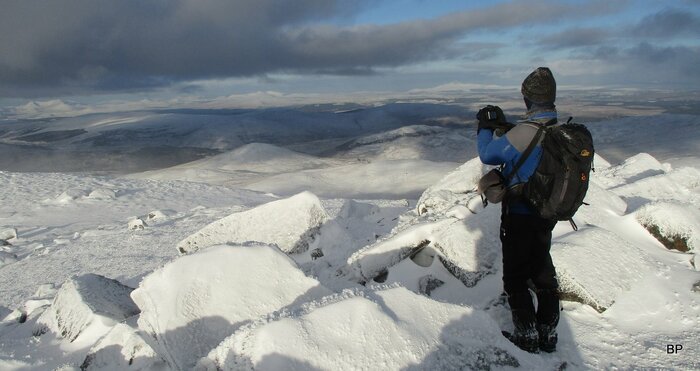 The sun behind Ben Wyvis: 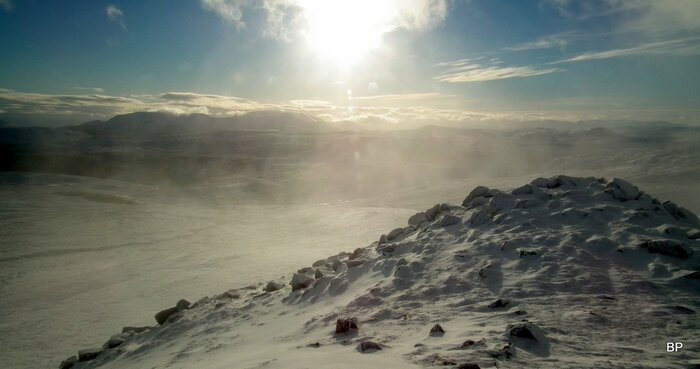 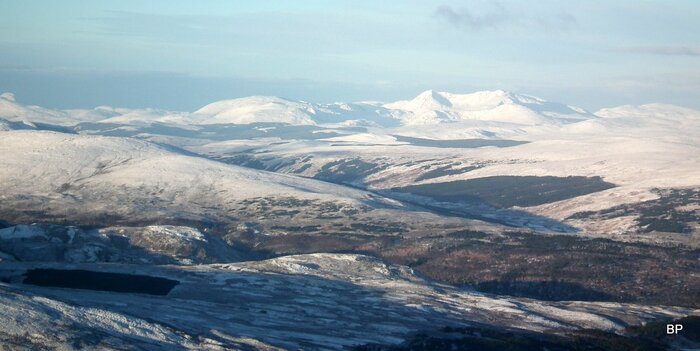 At some point, we realized that we only had a couple of hours of daylight left, so we had to hurry to avoid walking in the dark. Returning the same way was the logical option; at least this time we had views all the way

Panoramic photo north and west from the upper end of the stalkers path:

The path was easy to follow, if a bit filled in snow in places: 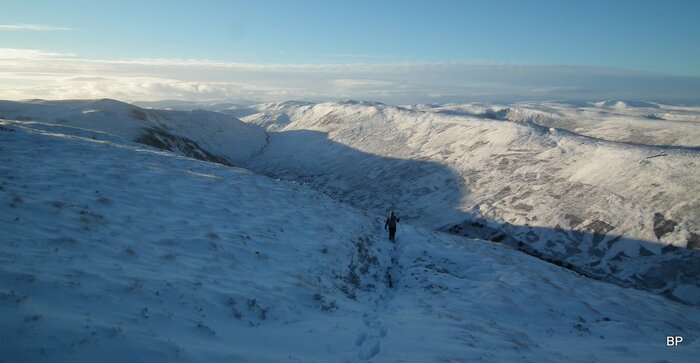 Chasing the sunset down to Glen Calvie: 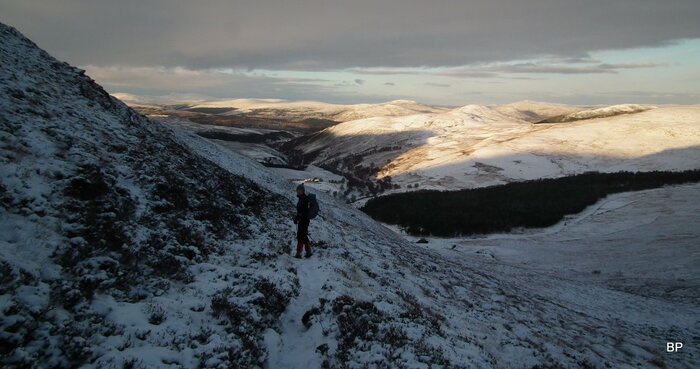 A local watching us from the estate track: 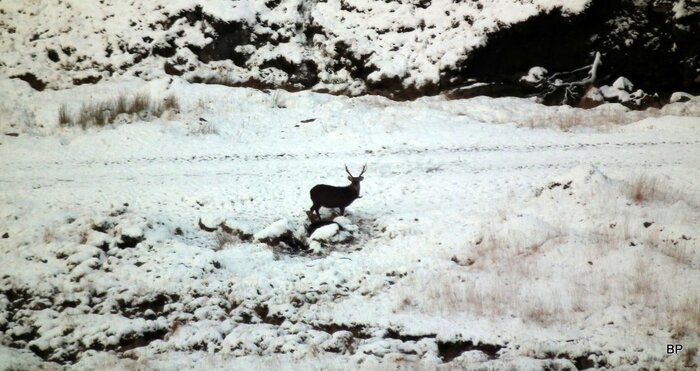 We timed our route exactly right; managed to return to the car park just as the last rays of sun disappeared behind the horizon. I don't mind walking in the white landscape at dusk. There is something special in the colours of the dying day... 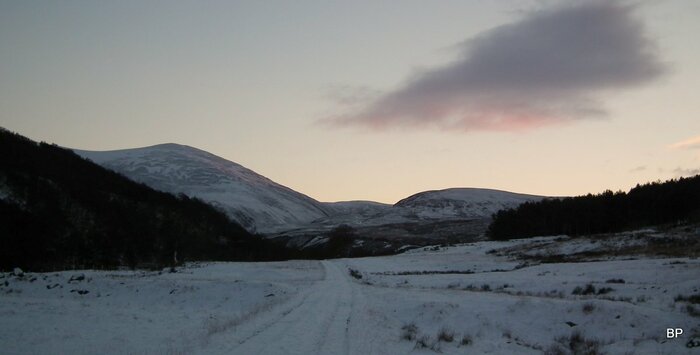 Hopefully, winter is here to stay for some time, but in Scotland weather is always a lottery. It might suddenly turn warm (I'm sure you all remember the strange, snowless winter of 2016/17) so we usually take advantage of every chance to walk in the white wonderland. We did exactly that last Sunday, re-visiting a wonderful Torridon Corbett. TR to come soon!

Nice report! I love the picture of "Carn a'Choin Dearg (a Graham) and Cul Mor"

That looks like it was a pretty stunning day - certainly if the pics are anything to go by: very fine!

Hope to get up into the Scottish white stuff in the new year.

Nice report and great photos. I did this walk in mid-June 2015 on a beautifully clear but very windy day. There were still some patches of snow near the top, and I saw a ptarmigan with two young chicks.

Great pics BP especially the Ptarmigan. I haven't been up there in winter, but had a close encounter with some Ptarmigan there myself.

Many thanks for all comments

Carn Chuinneag and Glen Calvie must be ptarmigan hotspots! We visit the area regularly and see them wandering around every time. Good to see them thriving at least in some places in Scotland. There was an article on BBC news earlier this month, about the condition of ptarmigan population in the UK:

According to RSPB Scotland, there had been an 81% decline in numbers of ptarmigan since 1961