This was my first walk of the year. I'm still in the process of losing weight and building my fitness, so I chose this walk as it wasn't too high but would still provide a bit of a challenge.

I don't have a car just now, so had to get a train to Balloch then the bus to Balmaha, this gave me really good views of Conic Hill as the bus sped along the road. Mixed thoughts came to mind - hill is looking great; am I fit enough?

So just after 9am, I started the ascent from the visitor centre, enjoying the peace of the short stretch of forest before emerging through the kissing gate onto the slopes of Conic Hill. The melancholy sound of Willow Warblers had accompanied me up through the trees. I quickly started my ascent but it was here that I realised that I've still got a bit to do to get fitter, I was huffing and puffing and my legs were sore. But I kept going, I knew I had to make it to the summit. My camera seemed to stop working on the way up, but I later realised it was because the lens hadn't clicked in properly, so I've not got many photos from the ascent.

There were only a couple of other people I encountered going up, include one guy on the West Highland Way. I really enjoyed the height once up on the summit ridge, although at this point the cloud was really low - I had hoped the cloud would have burned itself out by now, but it was another hour before it would and by then I should be back near the foot of the hill.

I got to the true summit at 10.15, so it had taken just over an hour to get here. Through the clouds I saw the silhouettes of a few people on the false summit, but even though I sat at the summit waiting for the cloud to clear, they never seemed to approach the true summit.

I then started my descent back to the bealach. I opted for the alternative grassy ridge back to the loch, and I was glad I did. By now it was getting really busy on the main path, so I had this ridge to myself; aside from the noise of jet-skis on the loch, it was tranquil. 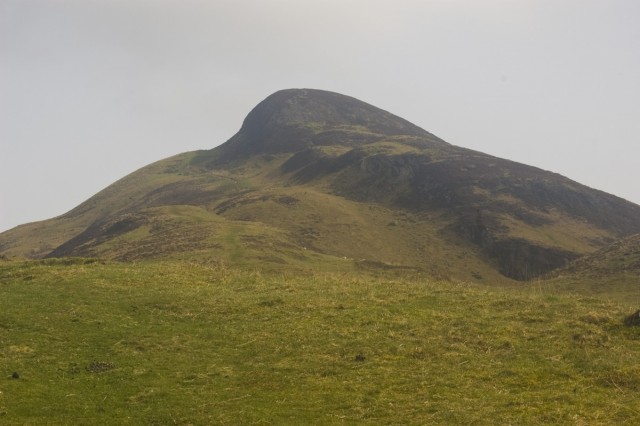 While sitting on a rock admiring the view, I noticed some movement at my feet and I saw a Common Lizard slither over them. I quickly got my camera out, now with the lens correctly fitted and got a few snaps. I sat there for another 15 minutes, sharing the rock with the lizard. I made my way down through the gorse to the foot of the hill. Unfortunately the gates at the road are locked, so had to scramble over them. This led to a really pleasant walk along the shoreline back to the visitor centre, with the sound of more Willow Warblers, but also their close cousins the Chiffchaff.

So while I felt sore afterwards, I was glad I made it to the top and back, and I know as I get fitter these walks will get easier and more challenging walks will soon be on my horizon.

Well done JT, great lizard pics too - keep it up, fitness returns faster than you might think

Thanks Chris. Looks like I had the same haze you had yesterday as well!

I'll keep it going, by the end of the year I should be running up the hills!

Well done JT great photos of the lizzard and also congrats on trying to get fit, I am in the same boat as I had a back operaton a month ago, and also trying to get fit myself, I might consider this one myself as it is only a short one, good luck getting fit.

Well done you on getting out and getting up there. I was in the same boat last April,,started a weight loss and excercise plan,,now 3 stone lighter and have done 7 Munros in the past 6 weeks,,heading off on the West Highland Way on Sunday and will end day 1 coming up and over Conic Hill and down into Balmaha,,cant wait,,

Keep up the good work