our_route.gpx Open full screen  NB: Walkhighlands is not responsible for the accuracy of gpx files in users posts
In terms of the weather, west would be best for once, a fact I was keen to use as I hadn't explored those areas that much. Looking at ski centre webcams, snow seemed to keep above 600 m; fortunately, Argyll offers a wide array of sub-2000s to choose from. The two I picked in the end - Cruach an Lochain and Creachan Dubh - had only been described on separate walks, but I thought it should be straightforward to combine them into a single circular walk.

Driving around Loch Earn was a little unnerving as the snow looked really low, especially on the Graham of Mor Bheinn, but the conditions started to look better the further W I went; The Cobbler and Beinn an Lochain finally gave me the confidence that barely above 500 m, I should be safely below the snow line. Not below the frost line, though; as I parked by the gate at the start of the track and took off into the forest, the grass around was covered by a thin layer of ice. 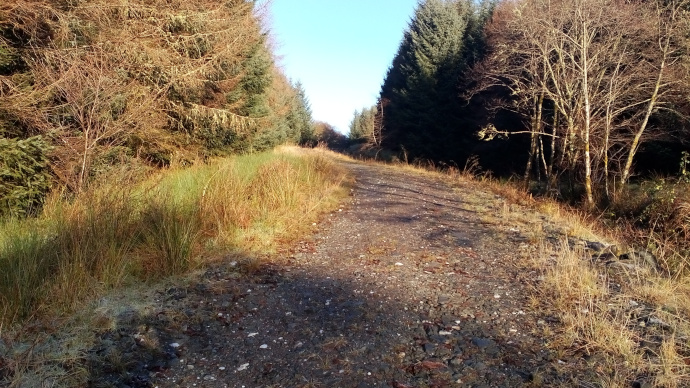 A teaser trailer for Creachan Dubh; I had another hill to visit first, though A quarry on the way

The OS map paints the W side of Cruach an Lochain as fully forested, but when I checked the satellite view on Google maps, it showed me various firebreaks, including a wide one close to the point where the track forks. I planned to use the firebreak to reach the crest of the ridge, but when I reached it, I saw there was something even better: a little before the track forking left, there was another track branching off to the right leading up the firebreak.

Creachan Dubh from a little further back

A clearing with the wide firebreak on the right (and the summit of Cruach an Lochain hiding somewhere behind the trees); the major tracks would fork where the land dips down, while the firebreak track starts on the right The track going up the firebreak

The track turned S once but then continued E almost to the crest; when it started to lead S for good, I left it and made my way to the crest without its aid. This bit was quite slow as the grass was overgrown with fallen branches hiding in it, and with every step I wondered how deep the surface would sink under my weight. But after a few minutes I reached a stone wall, and the grass on the other side was... well, perhaps not necessarily greener, but much lower and walker-friendly.

The bumpy ridge is then what I took to reach the summit. No paths anywhere, as could be expected - but the grass was usually okay, and jumping over the wall was no problem if the terrain looked better on the other side. There were places where I could see the ridge becoming very boggy in wetter weather - but in the current conditions, it was okay. Can you see a trig on the top of the bump on the right? I thought I did... then I came closer and it turned out to be a small tree instead! Like, where'd the G disappear to?? Apparently, it went to a higher bump further N (which offered the views of snow-capped Munros in the Ime, Lui, and Cruachan groups) 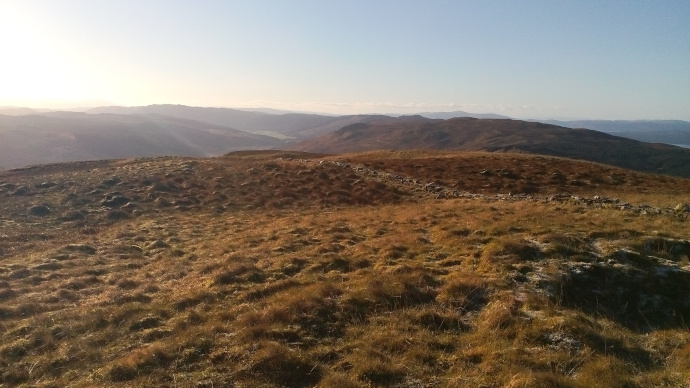 A look back down Glendaruel (and towards the sun)

Loch Fyne and the views W The lochan of Cruach an Lochain

I didn't go all the way to the lochan, though, as the ground by it looked suspiciously soft; instead, I turned left after taking that picture, crossed the burn, and started descending alongside it. At first, there was even a path to follow, although that disappeared as the slope got steeper. But I made it down to the edge of the forest, made use of a convenient gap in the fence, and set off down the firebreak. Into the forest I go The gap in the fence Once in, let's cross the burn, because I'll ultimately need to be on the other side 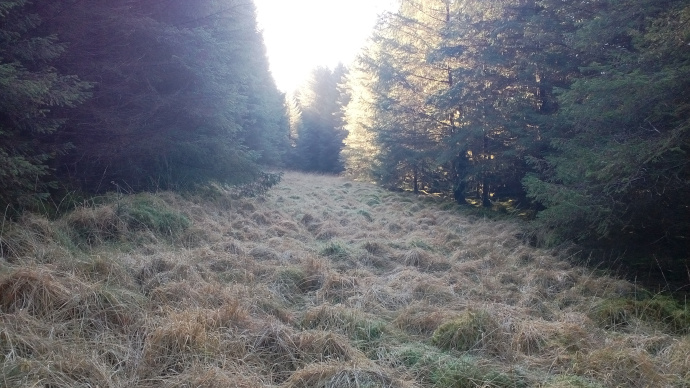 But the firebreak really was just that and shouldn't be taken for a forest path; it was more like a river of bog with tussocky islands...

Regardless, it was the correct one as shown on the map as it crossed another firebreak running NE to SW, bent right, and approached a burn. Or, approached a ravine holding a burn, I should say. It took some searching to find a crossable place, and then I tried to come back to the firebreak - except S of the burn, there was no forest anymore. And at the same time, no forest yet, as the land was full of saplings. They'd become a proper forest in some 20 years, but since I couldn't wait for that long, I tried to locate what most looked like a firebreak in this forest that really didn't need one. Fortunately, my guess was right, as I was deposited onto a track I could then follow down the glen. I also saw the firebreak and track I took 1.5 hours earlier from a different angle

A few minutes and two burn crossings later, I turned right onto another track, about to head back uphill for a change. But before I got to it, I came across another burn, this one pretty significant and impossible to cross straight away. Once again, it was time to search for an opportune place. I veered left to come across rocks that led me to the middle of the stream, clung to a branch of a tree growing on the opposite bank, and hoisted myself up to leap to the other side. Given the tree in question was a spruce, my hands were feeling the price of that move, but still better than being up to my knees in freezing water, I'd say. From that point, I just had to fight- ehm, find my way through a bit of the forest, and I was back on the track.

A couple zig-zags up, and I started looking for the firebreak I wanted to use to get out of the forest - the one enveloping Allt Tigh nan Sran. And I thought I found it. I mean, firebreak? Check. With a burn? Check. With the track bending left? I expected a bit more, but okay, check. So I took it. If I'd checked Google Maps here too, I would've seen that the prior burn had a firebreak too. No real harm was done, though. The burn was fed by a tributary running in a ravine that was a bit awkward to get across (it wasn't that far to jump but it would've been far to fall had I not made it, or had the other bank not withstood the impact), but after the last few metres of proper forest bashing, I emerged onto the grass and could start making my way up the ridge.

Because I believed myself to be some 500 m further SW, I took this for the 371 m top instead of what it actually was (Cruach Fasgach). That at least explains why I felt like I wasn't making any progress on the ridge... Another convenient gap in the fence

The ridge did feel endless, though. I was wading through knee-high grass sometimes hiding bits of bog underneath. That path-like feature going through the fence gap in the picture above? It was gone a few metres later. (Just like the fence itself.) And I was going more or less blind, with the sun just above the summit... or what I hoped would be the summit, but actually was the 434 m top. But the walking got easier from then on, the tussocks subsiding a little, Creachan Dubh looking all nice and innocent once I was by the trig. The fence was intact again too.

Loch Fyne and further into Argyll (and the hills in the background are Mull, I suppose?)

The Corbetts and Grahams of Cowal (and yet another windfarm) 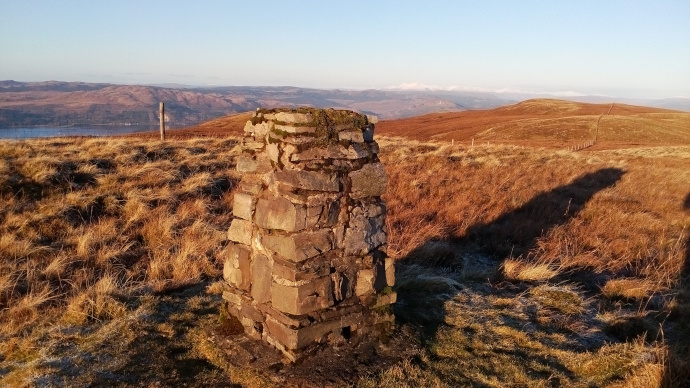 Build your own trig

On the descent, though, the foliage started to act up again. At one point, I was submerged in a sea of grass, then crossed over into a sea of bracken; in summer, it would've been a tick haven. But it was December, the ground was frozen - and slippery. Normally, that doesn't matter much on (in) grass, but I found myself in between two branches of a burn, with the slope ahead too steep for how slippery it was. Backtracking quickly, I crossed the burn and continued down a milder, but still overgrown hillside. Not so innocent, are you, Creachan Dubh? But the worst is further down 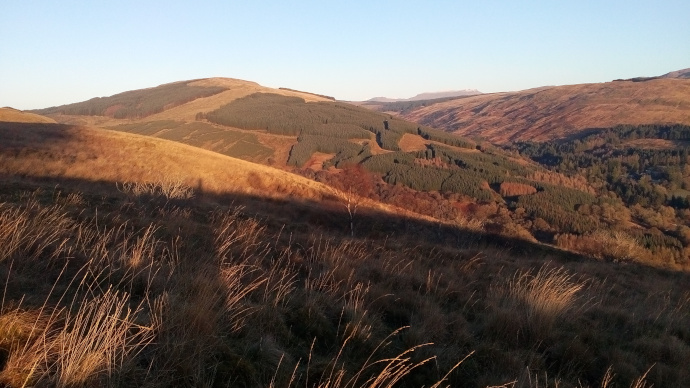 Looking back to Cruach an Lochain, experiencing some serious patchy baldness

Finally, I made it to a track leading to Kilbridemore Farm, through which I joined the road and reached the car. Summing up the walk... The weather was just as I hoped, which was great. It's a nice piece of land I'm happy I got to explore. The S approach to Cruach an Lochain could, I think, work as an alternative to the already described E route. But whether it should be combined with Creachan Dubh as I did... I'll withhold my judgement on that.