Arrived [via the Sleeper] to glorious weather in Fort William on 14 May - my brother (Neill) and I had our promised foray in the Highlands - hoped to finish the Mamores + take in anything else if our legs could cope. A short day! After collecting the car and a brief stop for essential supplies (3 pork pies?) in Morrisons we set off into Glen Nevis. A steady walk (2 hrs) saw us at Lochan Coire nam Miseach and some lunch. We couldn't help but notice the 'breeze' and the speed at which cloud shadows were passing over the hills!
We then zigged and zagged our way on to the Devil's Ridge and met the wind blowing E to W roughly. Why does the wind contrive to blow it's hardest on the narrow bits? A Munro baggers lot I suppose - at least it wasn't raining and we could see where we were going - more on that to follow. Made it to Sgurr a'Mhaim OK although had to pause every now and then for fear of returning to the car park a little quicker than expected. Great views, although hazy to the S. 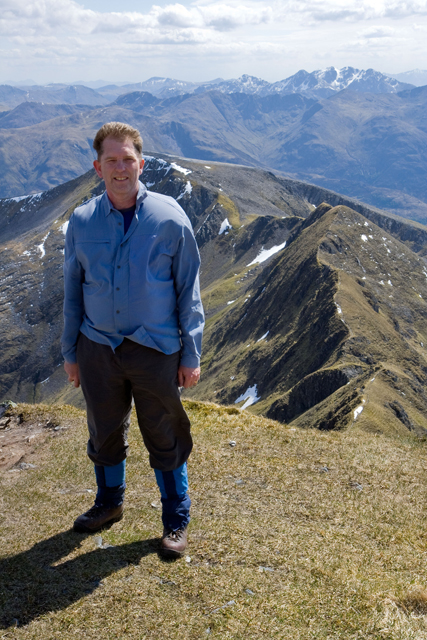 I'd read about this one and some will know it. Started great - the fine scree made the going easy - almost skiing, but once off that it was a relentless, knee-straining affair. Now Neill, having Martin Johnson type legs copes far better than I going down - and, by 3/4 of the way down my legs were turning to jelly - very hard to train for this kind of descent in Essex! Still, made it down and met some guys who had passed me earlier - they had done the 'Ring'. One owned a micro-brewery and produced some life-saving liquid from the boot of his car - it had the right effect

So a big thank you to who ever you were - all I know is that his pic was on the label - a Scottish beer, very hoppy - first rate.
A great day - only 2 Mamores left now - if only the weather would hold - but of course it didn't. I'll try to salvage a couple pics and write the next episode in a couple of days - Binnein Mor and Binnein Beag by sense of touch.

Good stuff NevJB - did you stick to the crest on the Devil's ridge for the awkward bit, or take the bypass path on the west side?

Looking forward to a touchy-feely report for the two Binneins

Morning Paul. Well we looked at it ................... and then walked around the W side. If we hadn't had the easier option I imagine we'd have done it just as we did a couple of bits on Aonach Eagach, but the wind was howling through the 'Chip' and I wasn't feeling particularly brave - the W side path was comfortably in the lee, so that that was the one for us

I remember the high scree descent fondly - as you say, a bit like skiing - it definitely helps you off. The less said about the rest, the better - my knee started playing up, and wifie had a miserable descent - she was almost 40 minutes behind me and daughter by the time we finished - although of course that did mean I'd time to heat the shower, and get tea ready (food and liquid) - some compensations then...

Lovely clear day you had, and nice clear pictures.

Great wee account - imagine no being able to remember the name of the Amber nectar?