The eastern Fannichs can be approached from different directions. We had done the "classic WH" route in the past (bog, bog, bog!). Earlier this year we climbed An Coileachan and Meall Gorm from the south and Sgurr Mor via Meall a' Chrasgaidh, but Beinn Liath Mhòr Fannaich is too awkwardly placed to be added to either of these routes, so we left it out as a possible winter outing.
Only a few days away from the winter solstice, we decided to visit the Munro with a very long name. Sadly, snow was nowhere to be seen apart from small patches over 800m, so unusual for mid-December. But the lack of snow was quickly forgotten. We experienced one of the best cloud inversions in our hillwalking lives!
The route we picked is sometimes used to climb Sgurr Mor via Beinn Liath Mhòr Fannaich, but since we have been to Sgurr Mor recently, we concentrated on the smaller Munro only. To make this walk more of a circular, we added Beinn Liath Bheag (many thanks to The Weasels for the idea

). Starting from the small parking area next to Droma Dam, we used the track along the pipeline to access Coir' a' Mhadaidh:

Track_BEINN FANNAICH 13.5KM.gpx Open full screen  NB: Walkhighlands is not responsible for the accuracy of gpx files in users posts
We started in thick fog. Assuming that the morning mist will burn off at some point, we set off across the dam and up the track.
The bridge over Allt a' Mhadaidh. If the river is in spate, DON'T CROSS here, as you will have to cross back later and there is no bridge higher up! We crossed and continued up the track for a short distance, but soon we had a better look at the river - looked like the crossing higher up would be problematic, so we retraced our steps back to the weir. Soon we located a wet path heading SW up the slopes of Beinn Liath Mhòr Fannaich. After the initial boggy section, higher up the path was drier and after about 200m of ascent...

As soon as we walked out of the cloud, there was inversion everywhere. Spectacular views of the mountain summits emerging from the white "sea" of fog:

My eyes were immediately drawn to An Teallach:

The lower hills like Corbetts and Grahams were only tiny islands in the sea of fog. Hard to even guess what we were looking at. These two are most likely the very tops of Cul Beag and Cul Mor:

The cloud was "pouring" into Coir' a' Mhadaidh - so spectacular! 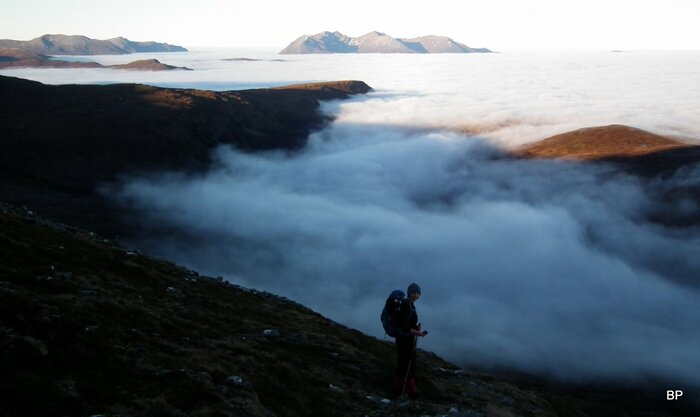 Out in the sunshine, we noticed that the temperature was rising quickly, it felt like double figures and soon we had to strip to short sleeves. Unbelievable weather for mid-December!
I must add that I do not overheat easily, quite the opposite, I'm always cold! My metabolism is so slow that I sometimes wear two tops in the middle of summer. Seeing me on the hills in shorts is a rare occurrence. Yet here I was, bare arms in December

We reached the flatter section about 100m below the summit. Here we spent some time taking photos. The inversion didn't show any signs of disappearing - it seemed to get better in time, actually!
Beinn Liath Mhòr a' Ghiubhais Li and more distant Ben Wyvis:

Due south it was just cloud...

The lonely island of An Teallach:

The Culs of Assynt and the very tip of Suilven:

Up the final steeper section: We reached the summit just before midday. The sun was warming us nicely, with hardly any wind it was perfect weather for a looong summer picnic. Indeed, we sat on the top for nearly an hour, enjoying the incredible inversion. Who knows when we will have another chance to admire this fantastic show of nature! The island of An Teallach:

A few more snaps from the summit (right, I know I'm showing off now

Our 62nd listed hill this year, only 14th Munro but these days we don't concentrate on numbers, more on new routes, doing the same hill in different season, visiting plane crash sites... Still, in 2021 we walked over 1200km and ascended nearly 50000m. After a dismal 2020, this was a good year! He Who Knows It All Best trying to stay serious...

After what felt like infinity, we set off on our way back. Instead of retracing our steps exactly, we followed the northern shoulder to a large cairn perched right above the crags of Coire Gorm: On the way down, we met a pair of ptarmigan. Poor sods lost their winter camouflage

Beinn Liath Bheag and Loch Sgeireach from the edge of the cliffs: Kevin ready to descend into the cloud: One more picture of the island of An Teallach Entering the clag again, we felt the temperature drop drastically. One moment we were marching in short sleeves, the next minute we had to wrap up in multiple layers. It did indeed feel like opening the freezer on a hot summer day!
We dropped to the wide col housing Loch Sgeireach. The cloud was actually rising and we caught a glimpse of the edge of the mist coming at us from the bottom of the glen: We continued past the loch, climbed gently about 120m to the summit of Beinn Liath Bheag, which has a surprisingly large cairn as for a Graham top of a Munro (it is also a Simm and a Hump - not that I cared!):

Sadly, we didn't see much from this top as the clag was dancing around it. We just about caught the outline of Beinn Dearg above the mist: From the summit it was a straightforward if waterlogged descent of 350m, following Alltan Thomais, down to the track and the pipeline (which can be crossed in several spots). Back to civilization and the fog...

It might sound crazy that this little circuit took us over 6 hours but we simply couldn't get enough of the inversion. What a day to end the year!

We might venture out onto the hills during the Christmas break but I doubt I'll have time to post anything before the end of the festive season, so once again - Merry Christmas and Happy Hogmany

Re: Beinn "Let's Have Fun" Fannaich

Re: Beinn "Let's Have Fun" Fannaich

Some very nice photos; not surprised you spent an hour at the first summit. Interesting how much a familiar landscape is transformed by the inversion.