Sub 2000' hills included on this walk: Fell of Fleet

Weather was to be a beautiful frosty morning and sunny all day, with not a breath of wind. So just what I was wanting for a day to Galloway to climb one of my last south of Scotland subs. It was a very cold start, as the walk was in the shade, early sun being behind the hill I was to climb. The walk itself turned out to be one of the best winter walks I’ve done in a long time, but having said that, some of it was terrible.

There's plenty of room to park at the start of the route just over the River Dee, south of Clatteringshaws Loch. A very easy 2.5 miles to begin with along a good forest road, then it was all change. 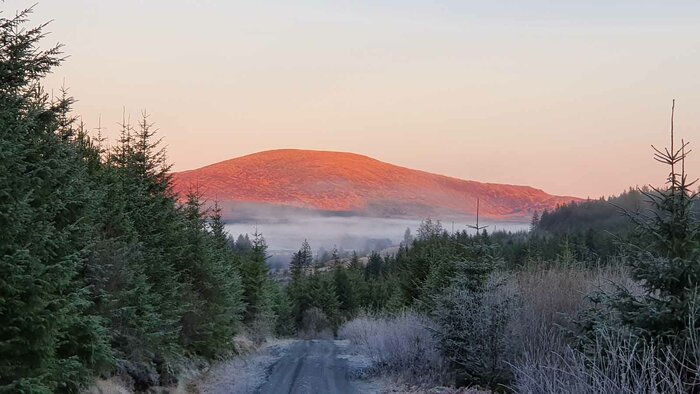 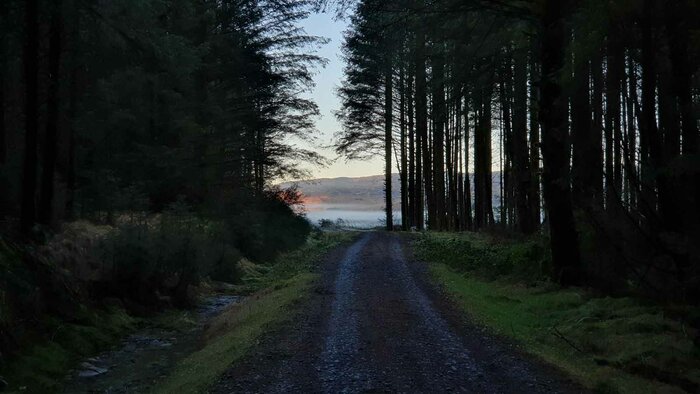 An easy walk through the forest 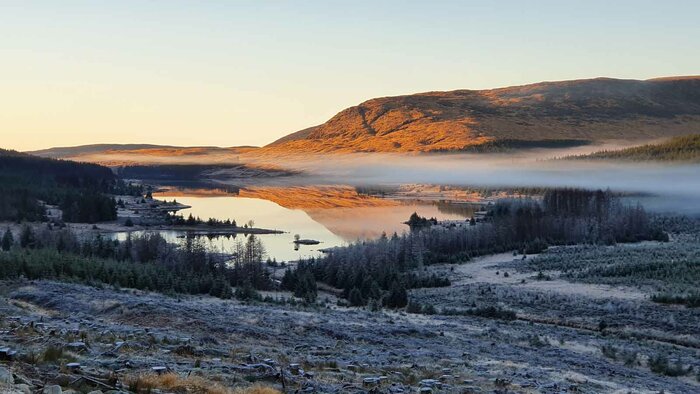 I’d now to leave the road and climb the forested jungle slopes of Back Hill of Orchars. There was an old path/track, used for timber extraction a number of years ago, but as it’s all replanted hereabouts, it’s no longer used so has become very overgrown for much of the way. This path did give me a way up the hill through the trees, but it wasn’t easy to follow, and I lost it completely in a couple of places. 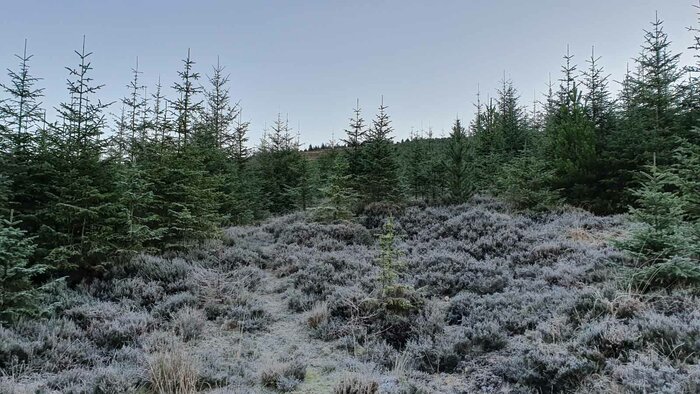 Start of the old path...it's not easy to find 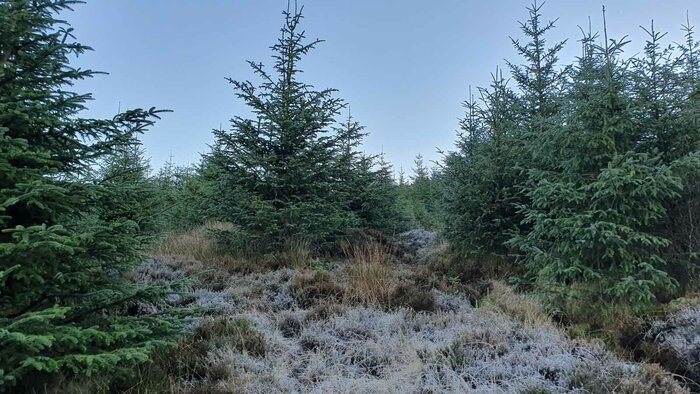 There's a path somewhere in there

After this jungle section was complete, at the highest point, I joined a wide forest ride up to Back Hill of Orchars, and the fun really began. The walking up the forest ride wasn’t really too bad, but at the top I came out on the open hillside/moorland and the walking became pretty bad and slow.

The view back from here though, over the main Galloway hills was superb, and being out in the sun now, the temperature was actually pretty mild. 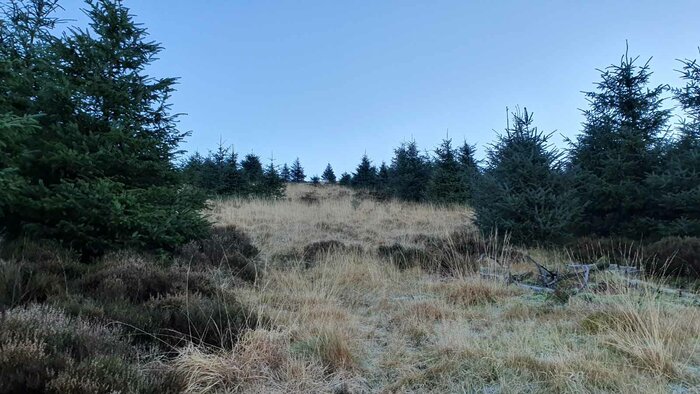 Forest ride to top of Back Hill of Orchars 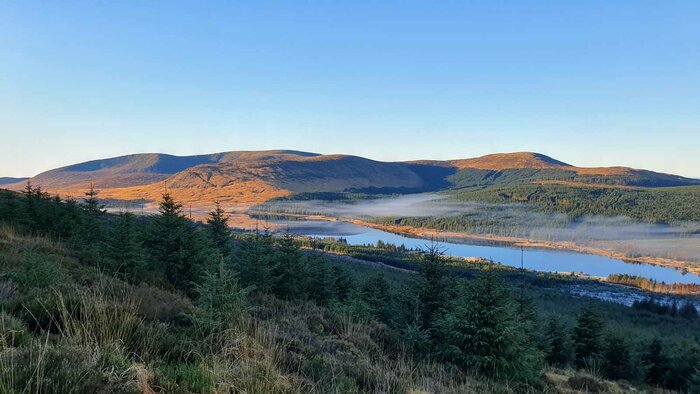 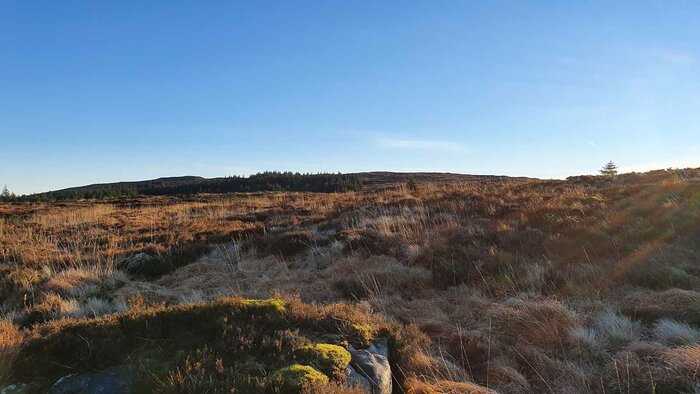 Fell of Fleet from Back Hill of Orchars

From here to the summit of Fell of Fleet, the ground was the typical terrain to be found on much of the Galloway hills, very uneven ground covered with thick tufted grass and hidden holes, not nice for walking on.

The horrible walking improved a little when I found a small path near the trees on the left. Unfortunately I’d to leave this as it didn’t lead to the summit, and I’d more awful terrain to cross on the final leg to the summit.

As I’d climbed the hill from the north, I’d no idea what I was about to see on the not yet seen southern side. There was a vast blanket of mist throughout much of the land to the south of the hill. This extended right out over the Solway Firth, with the high Lake District Hills sitting above the mist. The mist also appeared to extend right out into the Irish Sea all the way to the Isle of Man, with only the very highest part of the island visible, (there would have been a lot more of the Isle of Man visible had the mist not been there). Above the mist the views were exceptionally clear. Over the part of Galloway to my south, hill tops were islands in a sea of mist. To the north, no mist, but the main Galloway Hills were looking terrific basking in the sun. A wonderful place to be right now. 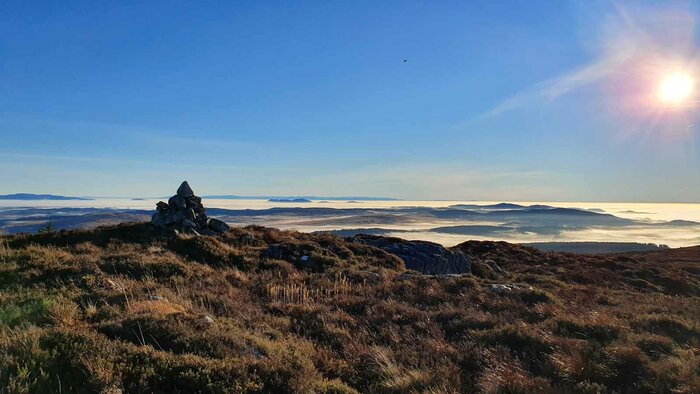 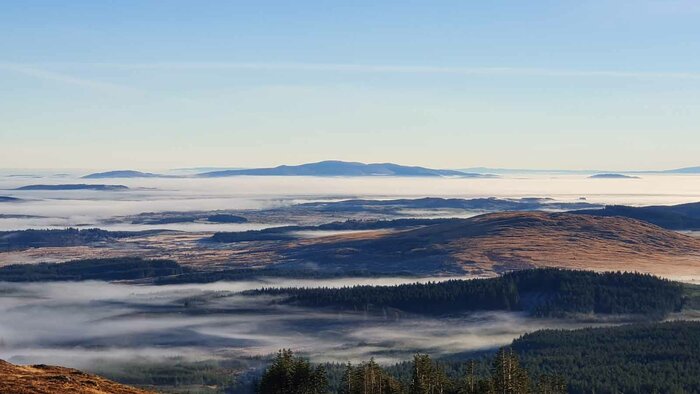 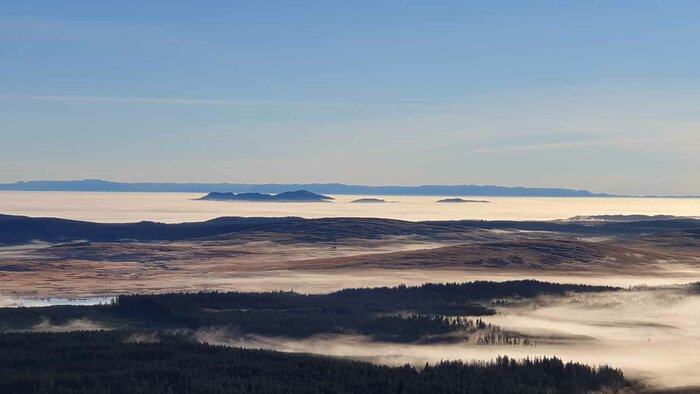 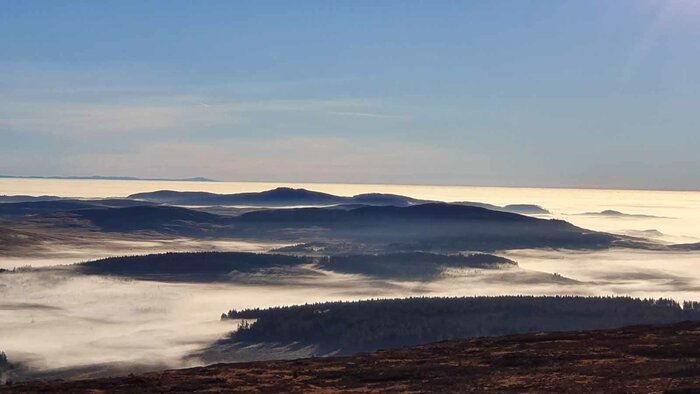 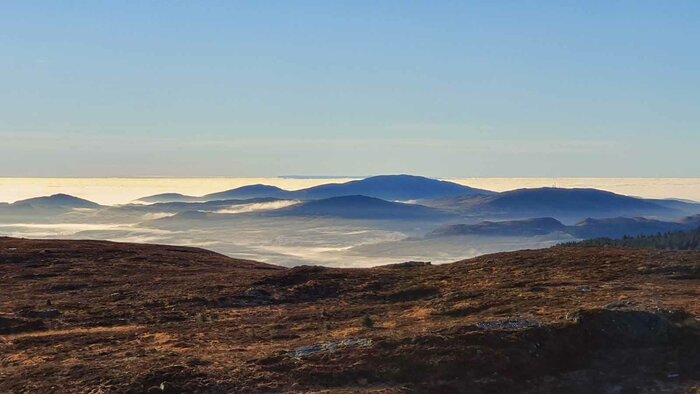 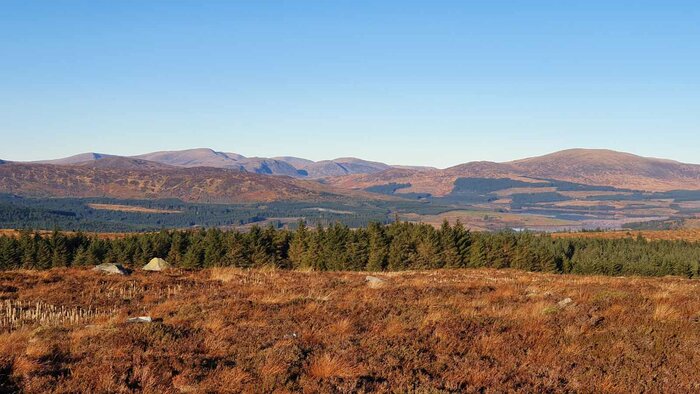 The main Galloway Hills from Fell of Fleet

After taking many photos, and a sit down for a snack, it was time to reluctantly retrace my route back to the car. 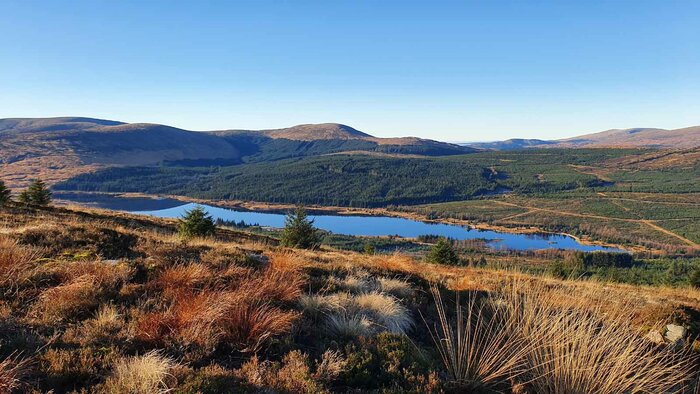 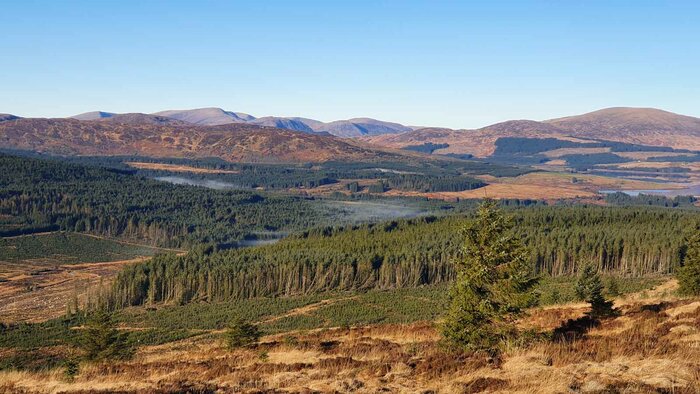 Galloway Hills from Back Hill of Orchars

Progress down from Back Hill of Orchars through the forest was actually harder than on the way up, as I lost the old path more often and took a lot longer to find it again.

But persevere and I did find it.

This path is only likely to become worse over time, but for now it still makes for a relatively easy route up to Back Hill of Orchars, though it may be pretty awful in the summer months. 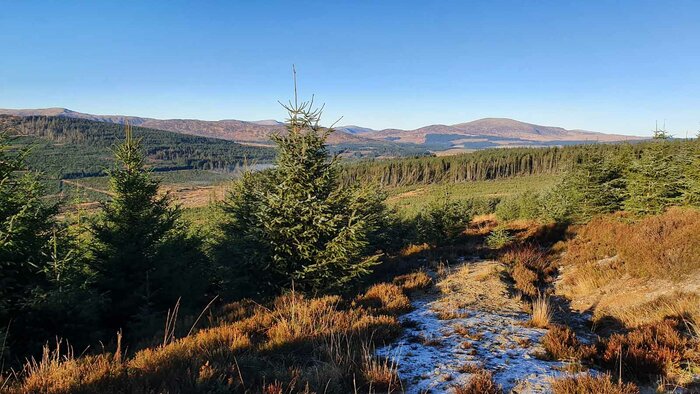 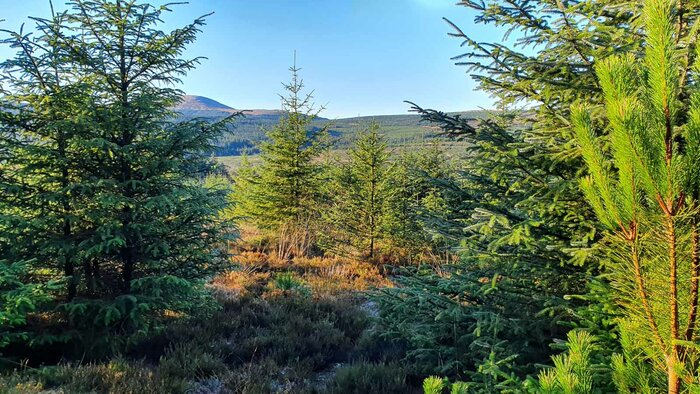 I think I've lost the path...AGAIN!

Back on the forest track, it was an easy stroll back to the car, and another balloon turned blue. 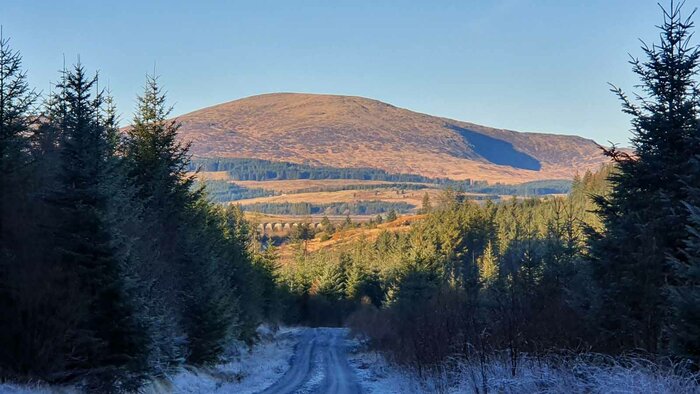 Almost back...looking towards Meikle Millyea and the Clatteringshaws Loch Dam

Re: A beautiful Galloway day on Fell of Fleet

The early start is commendable! Certainly deserving of those fantastic views. Are there any walks around here that doesn’t involve deep tussocks…!

Users browsing this forum: No registered users and 118 guests