gpx ok.gpx Open full screen  NB: Walkhighlands is not responsible for the accuracy of gpx files in users posts

Starting from.
Moy at Loch Laggan

This had been a route I had planned over a year ago but for some reason or another I had just never got around to it. After getting our 1st camp of the year out of the road last week at loch earn we planned another overnighter for our next trip.
Had a little search on my (planned trips folder) on the pc and decided on this route.

Again we would be arriving later in the day. The later start would suit this trip perfectly. A 4km hike up to the SW end of Lochan na h- Earba would hopefully produce a nice pitch for the night.

The weather for the weekend was meant to be favourable, Saturday was to be the better day. We could only hope for the weather to be good for the Sunday when we would have a big day ahead of us.

We eventually found a nice spot looking up to Coire Mor Chlachair. The site would also provide protection from the wind if need be.

It was still daylight when we entered our sleeping bags 7.30pm to be precise. 6am Sunday morning we have just left the tent and are on our way, again we travel light. Most of our kit is left at the campsite. I carry a pack with basic kit for Julie and I, Julie goes packless and Wilson has the water bottles.

We head up Binnein Shuas by the SW and arrive on the summit at sunset. It was well clear this early in the day that it was going to be a cracker, far better than the forecast.

Carrying on NE we drop down Binnein Shuas and start the long trudge up Binnein Shios, looking back every now and then to look at our descent route from Binnein Shuas. 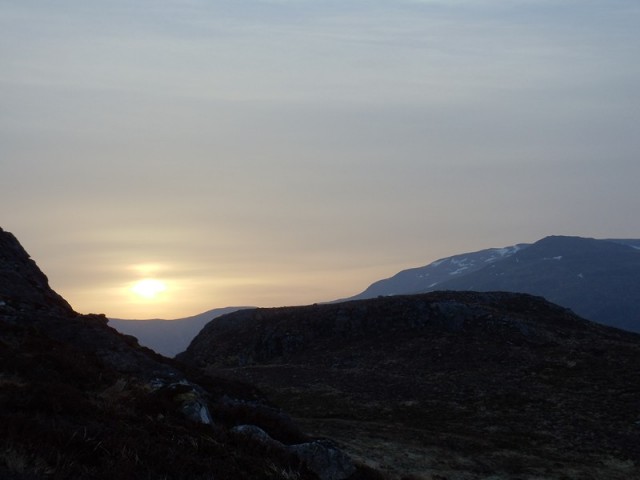 From the summit we head SE then SW and drop down through the sparse forest down to the shore of Lochan an H-Earba there we pick up the track. We then cross the bridge at the split in the Lochans and follow the Moy burn up to Coire a Mhaigh. From there it is a clear run up to the summit of Creag Pitridh or 1st Munro of the day. Weather is great, slight bit of haze that will hopefully burn away.

I think it took us about 45/50 mins to reach the summit of Geal Charn. This part of the route would be the only part of the day that we would find any kind of hill path at all. The summit would be near impossible to miss, the summit cairn is massive. My only regret of the day was that we never nipped over to the NE side and visited the deep sided coire (unnamed) Have any of you members viewed this Corie. ?? looking to Beinn a Chlachair

Heading off the summit SW we make for the bealach. There is a nice secluded Lochan at this point. We started to climb to gain the NE ridge of Beinn a Chlachair, we stopped before gaining this ridge to enjoy the views down to the small lochan and to load up on fuel that had long burned away.

Once on the ridge it was boulder fields all the way to the summit, the last thing we needed after a long day. My feet were already aching long before now. We descended via the west flank of Coire Mor then cut NE to get onto the track, before making our way back to the campsite/spot. Mini Lochan at the bealach Beinn a Chlachairs summit in the distance Looking to Geal Charn and Aonach Beag and Co im not for moving

As the water bubbled from the stove we packed all our gear away. We then enjoyed a strong coffee and the last of our rations.

The last 4k back to the car was a doddle compared to that boulder field on Beinn a Chlachair.

This really was a fantastic day, the weather just made it that bit sweeter.

You picked a great set of hills for the weekend's gorgeous weather. Cracking report and pictures, especially the last one

You picked well - sunday sure turned out better than expected

The wee Grahams are a cracking pair - getting a taste for the Grahams now?

Some great pictures of a great route

Having chosen the Ardvrekie trio for the weekend myself it was a bit of a surpise on Sunday to be coming down off Beinn a Chlachair and greated by Wilson bounding up the hill (after having mentioned his escapades to the wife just the day before). He had far more energy climbing up his fifth hill of the day than I had finising my first of the day

Great report - was a crackin' weekend all round by the looks of it. And good to see Julie back on the hills (though no doubt she has been for some time but I may not have been paying attention).

This has me reminiscing about all of the great early April days out I've had in the past. Great circuit, and can't wait to do those two Grahams - they appear to come highly recommended.

Pretty sure I looked into the NE corrie of Geal Charn as I was wondering what the stalker's path up it was like. Can't remember much about it, although it was a similarly nice day to yours.

Great report again Dave.
Thats an interesting route going up the Graham first. I took a picture of it today and it looks impressive. Nice choice of route of the final munro.