After a failed effort ( on old years night we were determined to go back to Mount Keen as the first monro of the new year. We would have been out earlier in the year but Su managed to skive a few weeks in hospital having a Gall bladder removal, but having had a wee walk up The Law on the Ochils was now ready to retackle Mount Keen. The difference was instant driving up the road to the car park at Invermark, where we had snow and ice last December, there was a lovely spring day to greet us as we arrived at the car park at Invermark. Along with the very friendly chaffinches was our optimism of nature taking its course as the whole place was transformed into a blossoming countryside. Even a signpost to show you the way !!

As before we set off over the bridge and past the church heading alongside the small forest and then quickly get up a good walking pace towards the Queen’s Well. The easy walk towards The Queens Well

As we opened the metal gate we saw in the large puddle the frog spawn as further evidence that spring had sprung. 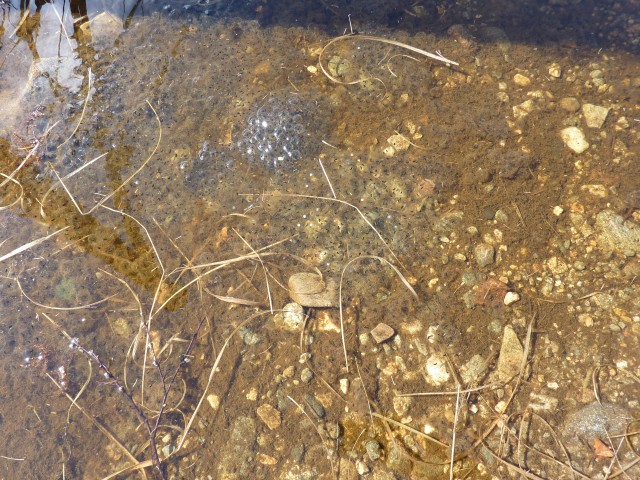 Further along the path this was confirmed by a wee toad in the middle of the path doing a bit of sunbathing ! So it was a really pleasant walk catching sight also of the Salmon traps that were in The Water of Mark. This, I presume as part of the environmental work that is taking place here. The landscape was looking splendid and photos were being taken at every opportunity. This wasn’t the case the first time round! Before long we saw the Queens Well, and a couple of walkers with their big dog heading back from their walk up to the well. We had a quick pit stop and took the obligatory
photos of the Granite structure which is splendid and wondered if anyone did any maintenance on it, thinking it would be a shame if it fell into ruin as I would think it is a very popular walk, and people would miss it. Going from there we took the right hand path, past the house, and started to head up to cross the ladder burn where we crossed by way of an iron grid. You will see the difference of the crossing comparing it with our attempt on Dec 31st. This time there was
no snow and ice on the path and we quickly make headway till we came to the point of three quarters up the long stretch overlooking the gully. this was the point where we had to tun back on old years Day. This time we had no problems carrying on and after a few zig zags we were heading up onto the moorlands and met a young couple who had done their first Monro. After a natter we continued on an up to the large cairn where we stopped and looking back there are great views of Glen Esk. Also the views were getter clearer so the forecast was correct and the best of the weather was going to be in the afternoon..yippee! looking down on Glen Esk

Turning right at the large cairn we headed for the summit now within easy walking distance and we quickly made our way along the nicely even and maintained path. There was also a great help in that steps have been put into the boulder strewn rock and a good job they have done too. After a couple of false summits the trig point was visible and we made it up to there in good time to summit Mount Keen. So now it was Mount Keen 1 – 1 Su and Jockstar. We then took the obligatory photographs with good views over to Lochnager in the west and towards Glen Clova in the south. After a bite to eat we made our way back down by the same route and was glad that we had returned to do this hill. I can see how a lot of people like this one but maybe 1.5 times is enough for me. As we reached the metal gate we saw a couple erecting their tent for some wild camping and wished that was us. As it turned out it was Kinley and Hazel so apologies for not saying hello. We were too distracted by the deer over on the other side of the water! Memo to me – get a tent and always say hello to other campers. I usually do say hello if we met people walking so must include campers also !!!

Great report, great pics - congratulations on going back and taking the hill. Did this one myself recently but only got the shortest glimpse of blue sky

Good to see you standing proudly on the summit Brian. Never let a hill defeat you twice

I've still not bagged this one yet, but it's coming soon.

Great report and pics Brian. Really enjoyed this one and so glad it was our first one of the year, remember the snow picture you included oh so well

(good for a comparison).

Looking forward to our full weeks walking and camping next week, hope you have picke out loads of good ones, with maybe a wee scramble or too for us.....

You are so right nathan79, no way was it going to defeat us twice!!