It was Boxing Day but no force in the universe would be able to keep me inside a box. I had a few ideas for short winter outings prepared - just in case. Meall a' Chaorainn, a local Graham, was high on the list. We had done it before in combination with its larger neighbour Fionn Bheinn, but I always fancied an alternative approach from Glen Duchairidh. This route avoids any steep ground and follows a well defined stalkers path to the height of 500m. The final ascent is up a gentle ridge, some peat hags to avoid but nothing drastic. Views are stupendous on a good day!

Track_MEALL A CHAORAINN 13.2KM.gpx Open full screen  NB: Walkhighlands is not responsible for the accuracy of gpx files in users posts
The morning was cold. -5*C down in the glen

but I'm used to Siberian temperatures so why would I be put off by a measly few degrees below zero? Wind was more of a concern as forecast suggested gusts up to 40mph on Munro level, but we were only going up a Graham, so hopefully we'd manage. It was worth a try.
We took time driving up to Achnasheen on icy roads, only arriving at the starting point at 10am. This walk shouldn't take more than 5 hours even at a slow pace, but we soon discovered that a path frozen solid is no better to walk on than ice rink.

We parked by the gate at the start of the track going into Glen Duchairidh. Parking here is limited to 2-3 vehicles, but today we were alone. No wonder, it was Boxing Day so most folks were celebrating their family Christmas, devouring fruit cake, turkey and mince pies. Our version of festive entertainment was... climbing over a padlocked gate, dressed in multiple warm layers One gate negotiated successfully, time to explore the forest!

Not that there is much to explore in the woods. The trees quickly give way to open space. The old stalker's path is a good guide out of the glen: 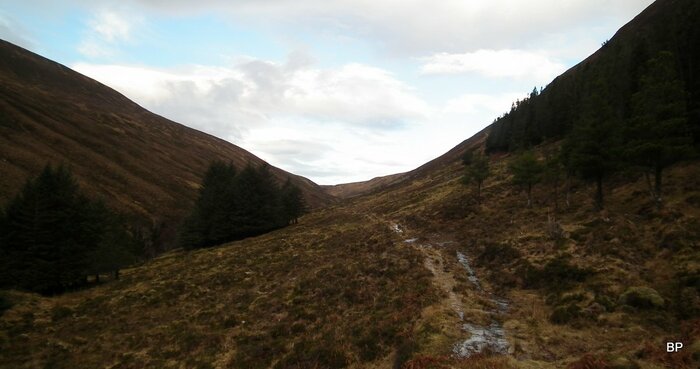 Higher up, the path was very icy in places and I tried to imagine how wet it must be in spring when the snow melts and the water drips down the steep slopes... Today, streams were half-frozen and Kevin enjoyed photographing weird ice creations: One of many streams cutting across the path, this one was easy to cross: ...but in one spot, about half way up the glen, the path has partially collapsed and a very short scramble is required to cross a small stream. In normal circumstances we probably wouldn't even notice this rocky step, but today it was covered with ice and we had to take an alternative path which was...ehmmm... a bit eroded (and also icy). It took some careful balancing on the slippery surface, but we got across safely. Me posing with the iffy path behind

The path continued out of the glen and across the western shoulder of Meall a' Chaorainn. We left it at its highest point, about 500m, and started the laborious climb up the heathery slope to the summit. I say laborious, because we were now facing the wind and it wasn't joking. Kevin was even doubtful we could reach the summit at all and he mentioned turning back, but I wouldn't hear any of this. I had summit fever (despite the freezing conditions!) and it kept me warm!
Meall a' Chaorainn is a superb viewpoint as it sits between Torridon and the Fisherfields. The eastern horizon is dominated by its higher neighbour Fionn Bheinn, but in any other direction, views are unobstructed and include many popular tops, like the peaks of Coulin:

The summit looked quite a distance away but the view was misleading - we were only about a mile away:

As we walked up, we noticed that the gusts of wind were not as strong, weather was definitely improving: more sunshine and it felt a bit warmer. Or maybe we were just working hard enough to stay warm. Anyway, we knew now that we'd get to the top, even if Kevin kept stopping every 10 minutes for another photo session

The western Fannichs and Sgurr Mor:

We got to the summit eventually, just before 1pm. The small cairn on the top was just about visible under snow. It was a repeat hill for all of us (including Wee Lucy) but it counts as a "new route" since the previous time we did it from the other side. Today we didn't even entertain the thought of adding the bigger brother - too windy!

...concentrating on Slioch as the best light was to the west and north of us at the moment...

...when suddenly he swore - his camera died. He changed batteries to spares, but they were dead as well

I wonder, did they just drain because of the cold or maybe he'd forgotten to charge them? One way or another, he couldn't take any more photos today and my oh my - that made him grumpy! In opposition to Kevin, I was a happy Christmas bunny. My pocket Canon has lithium batteries so it lasts better in winter conditions

The Fisherfields and Lochan Fada

The sky to the south was much darker and cloudy, but we recognized the familiar shape of Strathconon Corbetts:

On the way down, I did my best to catch the best light on Slioch (much to Kevin's despair, I kept stopping for even more pictures

Spare a thought for the Spear!

An odd shape sticking out of the snow, An Teallach in the background: Walking down was much easier as we were now traveling with the wind; we retraced our steps (well, more or less) back to the high point of the stalkers path, enjoying the views of Torridons in the afternoon sun:

Kevin looking for the path:

I was a bit worried about the dodgy step, but we had no problem crossing it on the return leg. The whole walk took just over 5 hours but walking into the wind takes time. We didn't exactly need to hurry either. Descending into Glen Duchairidh was a nice finish to another good day on the hills. This is good alternative route if climbing Meall a' Chaorainn on its own. A full traverse of this hill is also possible, with dropping down the hydro track to Achnasheen, but that would involve returning along the road for about 3km which we didn't fancy. We were perfectly happy with our version

...
Forecast for Monday was less windy. We took the chance and re-visited another local Graham for more meowing! TR in progress.