No, not that Cul Mor and Cul Beag! Most people will probably have glanced at this pair on their way north on the Ullapool road (possibly even on their way to their namesakes in Assynt) as they do stand out, but fewer will have put a name to them.

No bothies or camping for us this year sadly, for the second Hogmanay in a row. Jackie was meeting up with a friend on new year's day in Muir of Ord to play some music, so I looked for a walk I could do after dropping her off. Time wasn't an issue so I could have picked any hill within a 40 minute drive to go up, but typically the weather wasn't playing ball. Although it was relatively warm with even the possibility of some sunshine, the 60+ mph winds on higher ground just didn't sound appealing. So after a quick look at the map, I strung a route together which took in a few places I'd been meaning to visit for years.


our_route.gpx Open full screen  NB: Walkhighlands is not responsible for the accuracy of gpx files in users posts
Parking on an available bit of verge just short of Orrinside, I started walking shortly before midday. It was bright and breezy, but with a threat of showers shortly. The road past Bridgepark is private but tarmacked, so the first mile was quick. A guy walking his dog here was the only person I saw out all day. 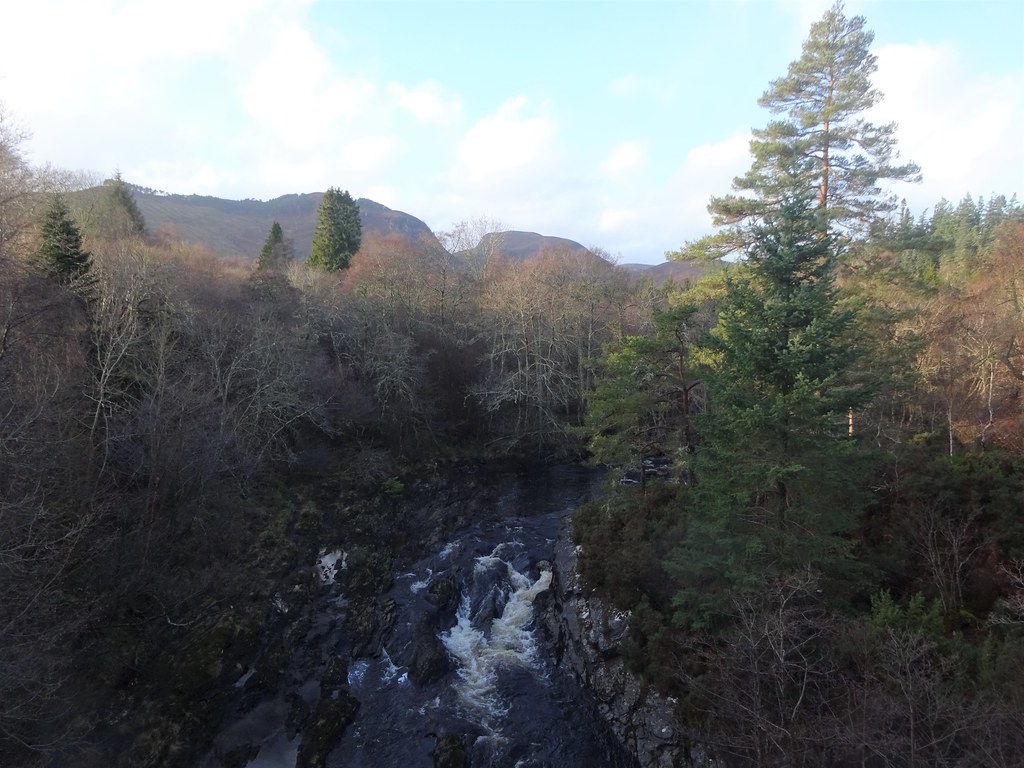 Reaching Coire a' Chuil, I left the road and climbed over a high gate to pick up the path towards Cul Mor. Higher up, a corner of the path has been cut off by a newish deer fence, but it only involves a minute or two of heather hopping to get on the second bit of path as it traverses beneath the eastern shoulder of the hill. Nice views developed back to the east. 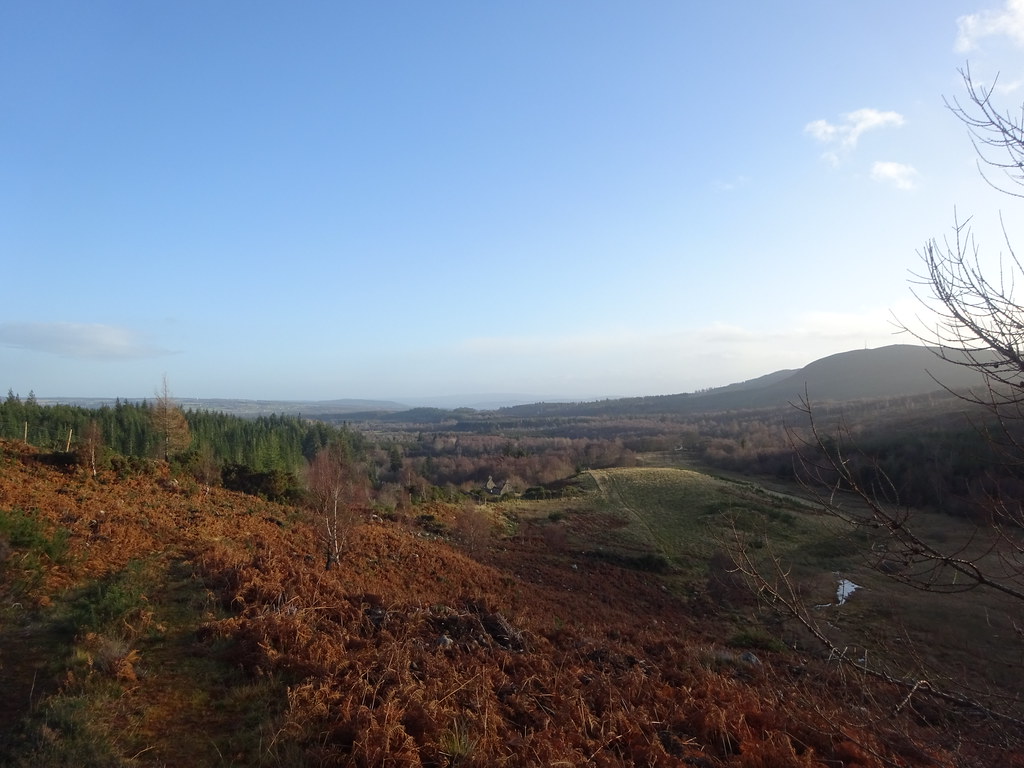 Back to the Black Isle 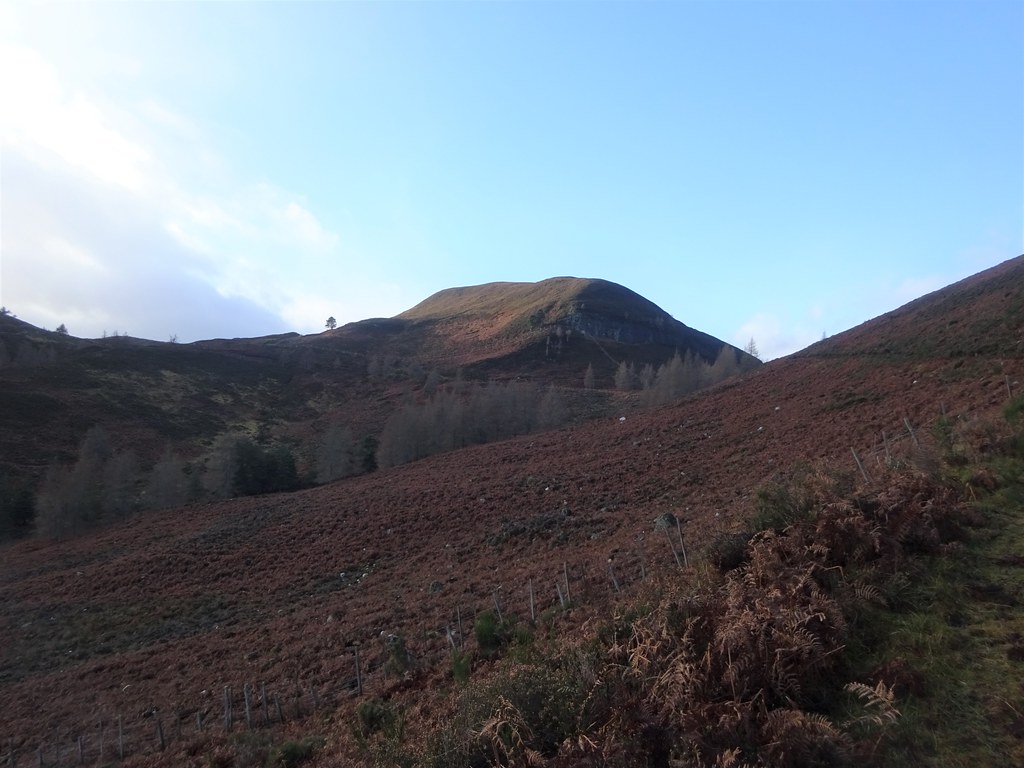 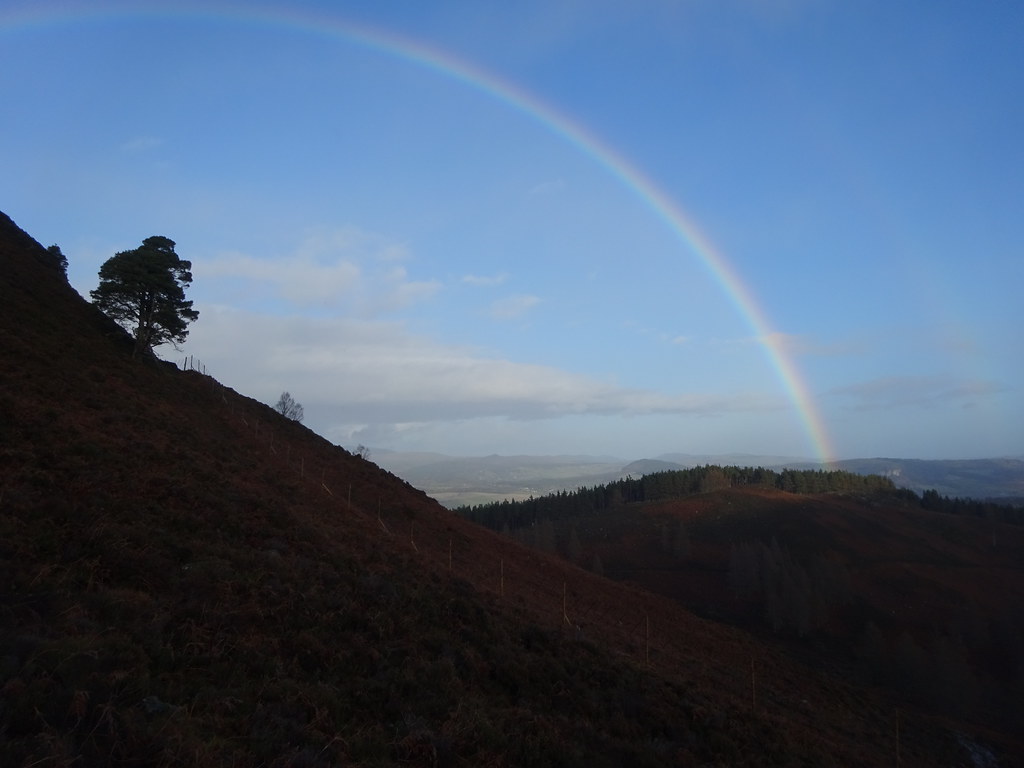 Higher up I decided to leave the path and climb the fence to gain the SE flank of the hill. There was a bit of a grassy run through the heather here to make the going easier - probably fills up with bracken in the summer months though! I eventually landed on a faint path traversing back to the NE nose of the hill - I could have reached this from a gate in the fence if I'd just kept to the main path a bit longer. Views opened up across lower Strathonon to Strathpeffer and Ben Wyvis - an angle I've not really seen this area from before. 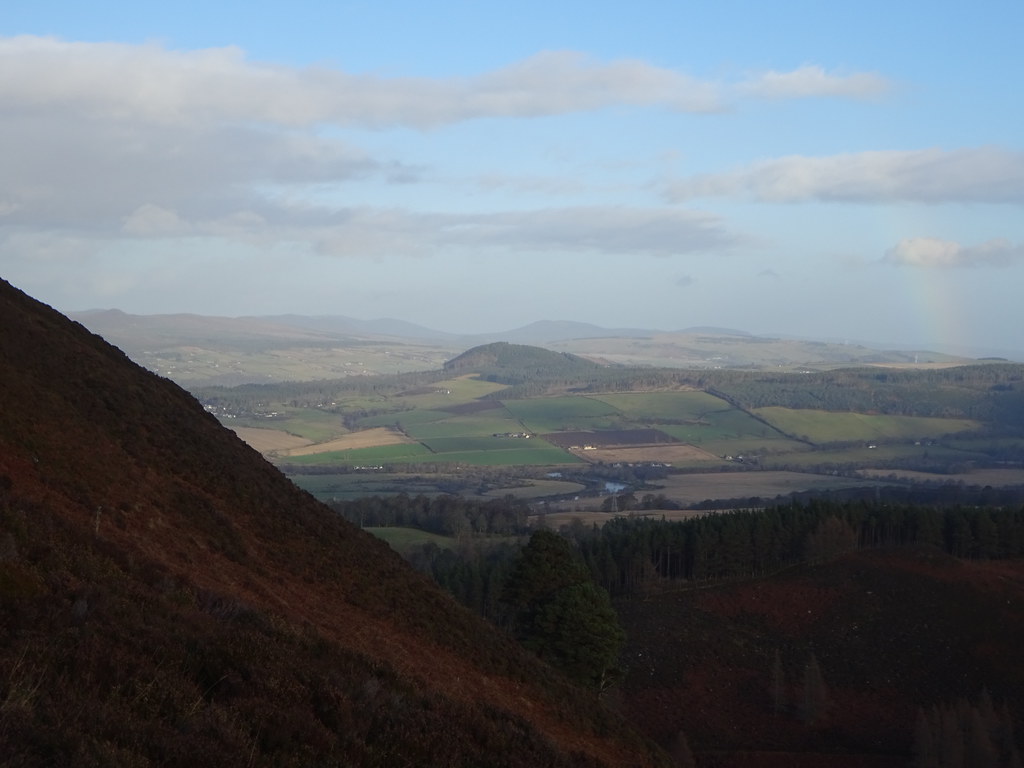 The wind was mostly tolerable but pretty tedious right on the summit. I decided to escape rapidly - having spotted a steep crag on my way up, I didn't want to go too far west, but again there was a faint path to lead me down towards the top of the new deer fence and Cul Beag. Even the path was pretty steep in places as it basically went down an overgrown conglomerate slab, but nothing awkward. 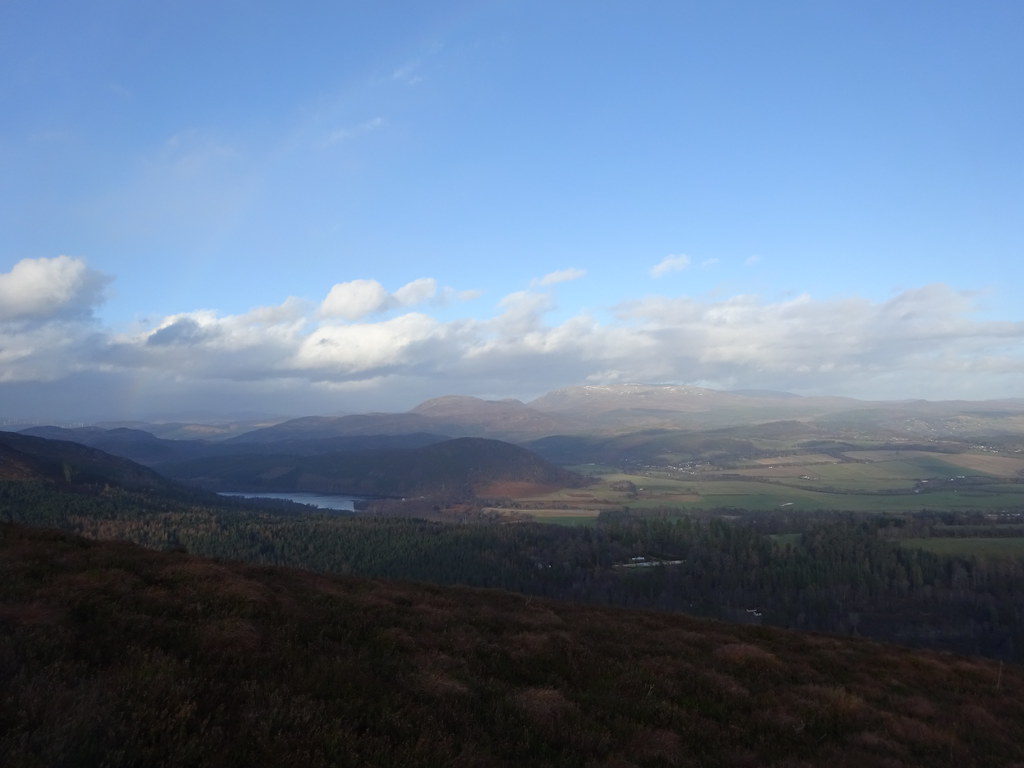 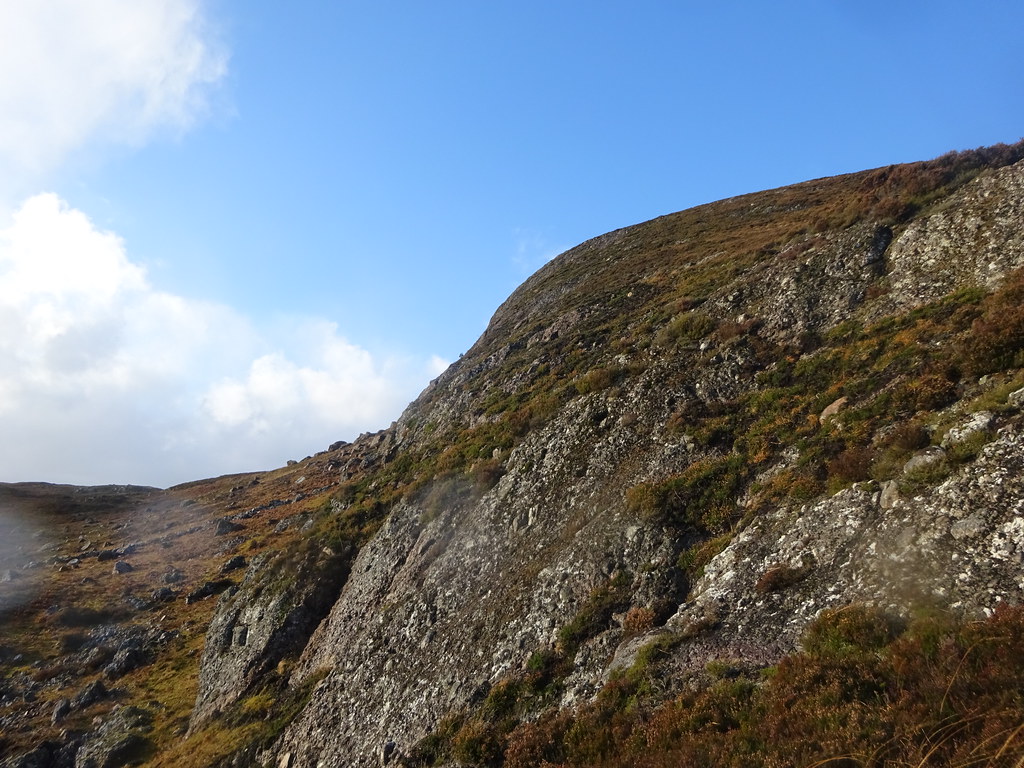 The further back I got from Cul Mor, the more impressive it looked. While it was never likely to challenge its Assynt namesake for impressiveness, it is definitely a local hill that I'll be back to again.

After following the deer fence for a short while, I crossed the other main track climbing out of Coire a' Chuil and picked up an old dyke leading me onto the plateau of Cul Beag. It was less impressive than Cul Mor but still with good views east to the Beauly Firth and Black Isle. 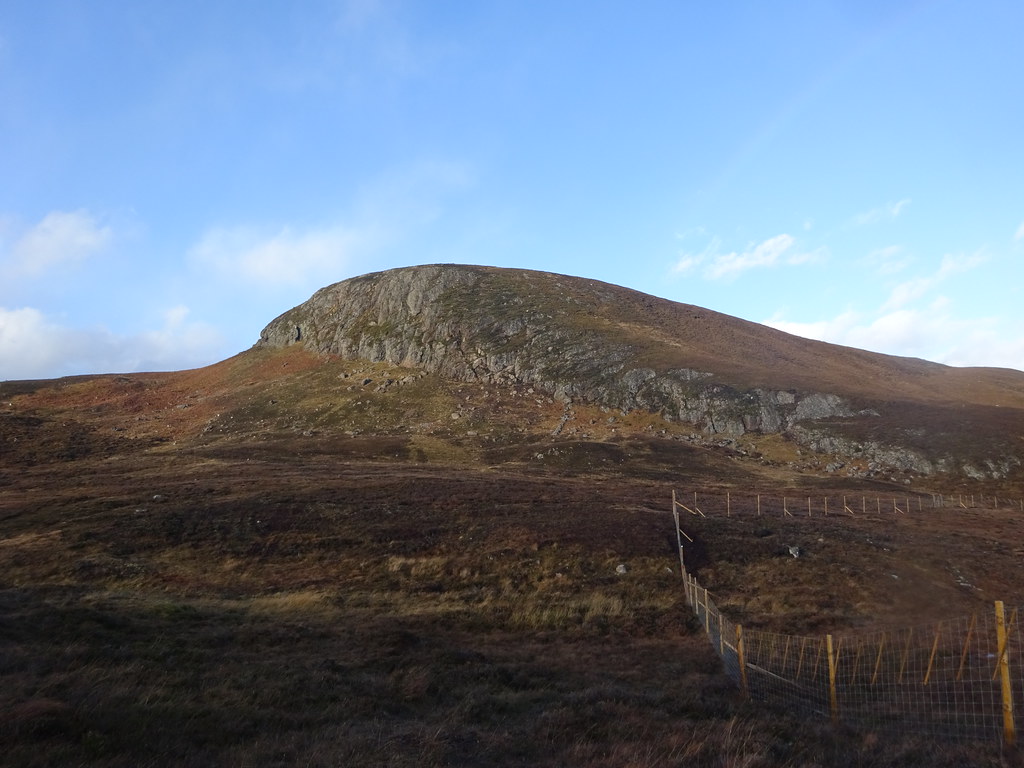 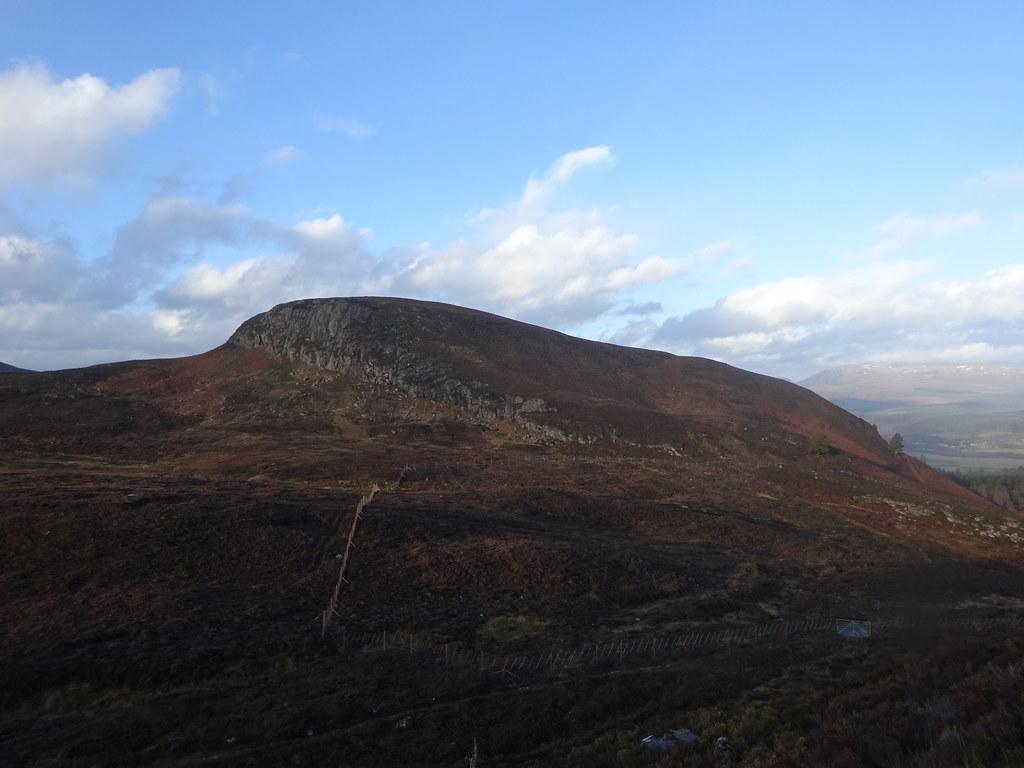 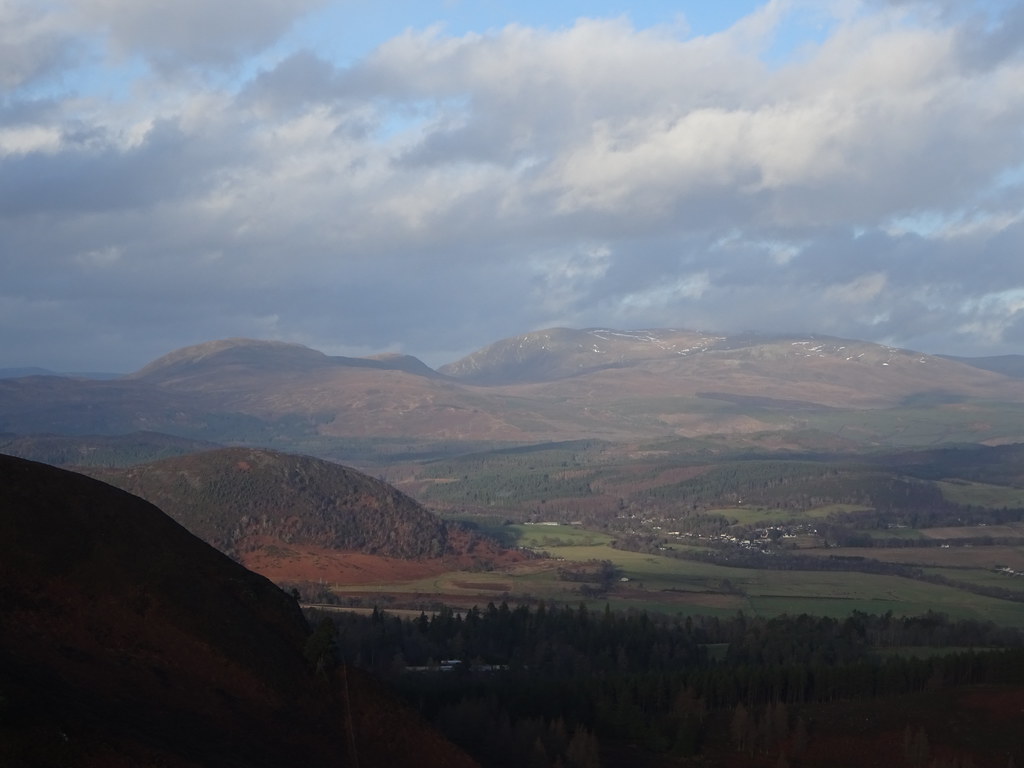 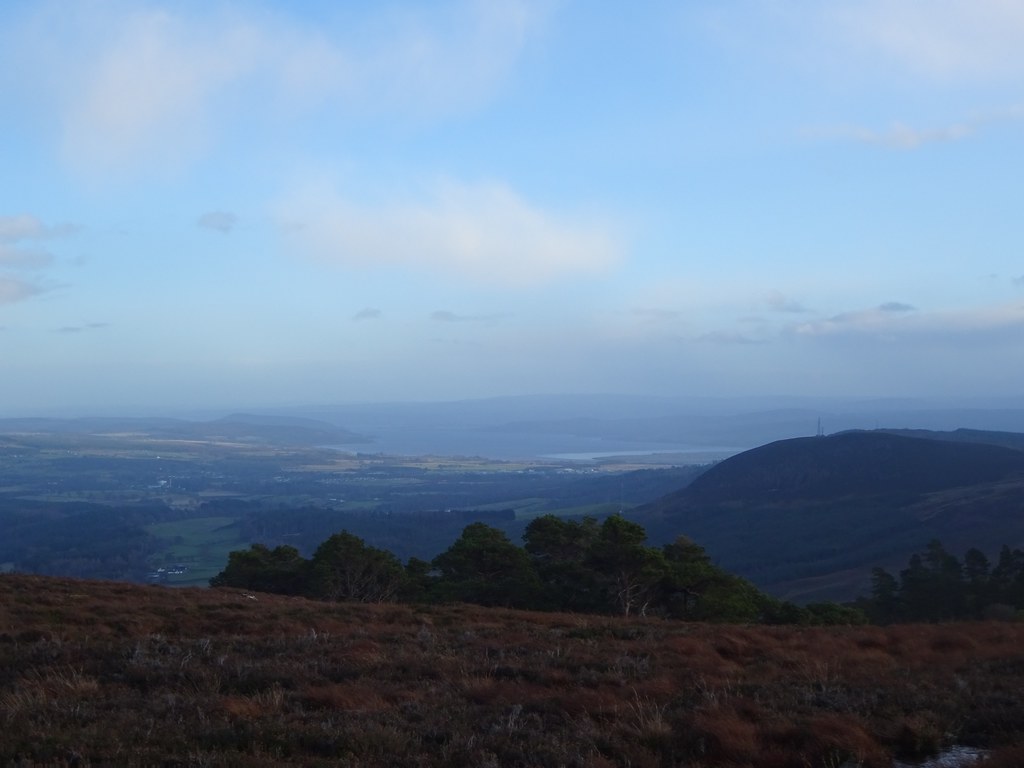 East to the Beauly Firth

My next objective was the long path up Gleann Goibhre from Aultgowrie - I had long ago spied this as a potential route to reach Beinn a' Bha'ch Ard from Muir of Ord on a long public transport assisted day out, but never actually got around to checking it out. I followed deer tracks at first, then made my own way across the heather to meet the path up on the moorland. At this point it was a reasonable vehicle track (although pretty wet from recent rain and snowmelt). 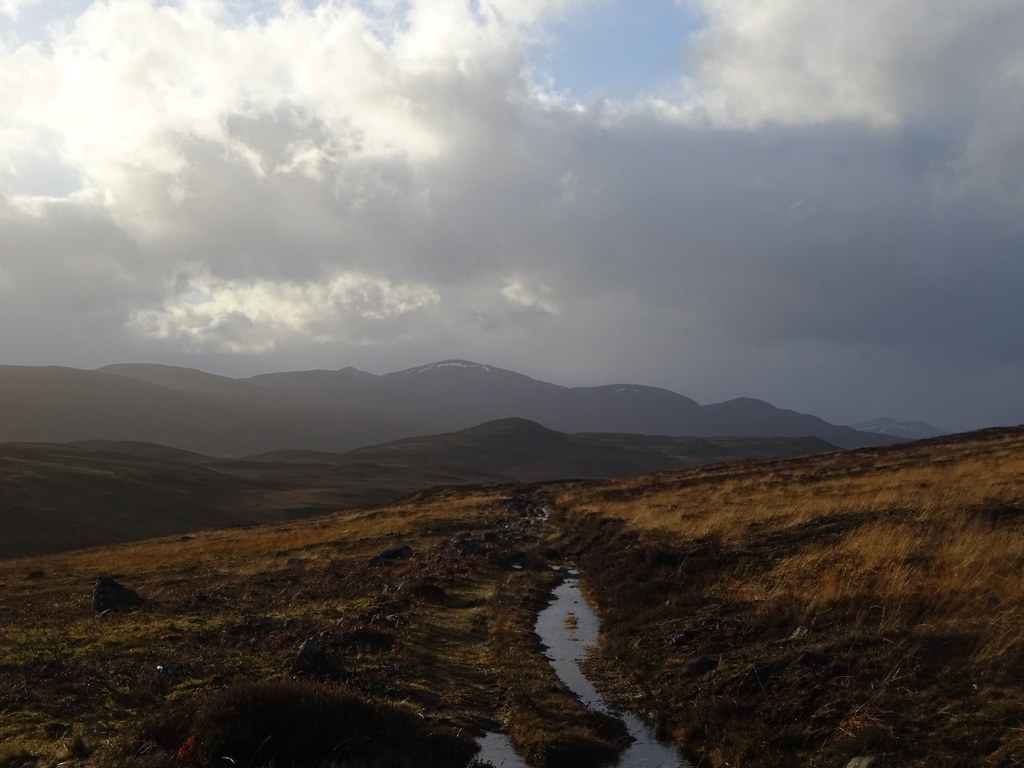 I left the good track after a mile or so to follow an almost non-existent path towards Tighachrochadair. The ground wasn't awful to this was OK. I wasn't sure if I'd be able to cross the river to reach the building, but this had been another spot that had intrigued me for years - an isolated farmstead hidden away up on the moorland. I had heard rumour of it being a bothy. 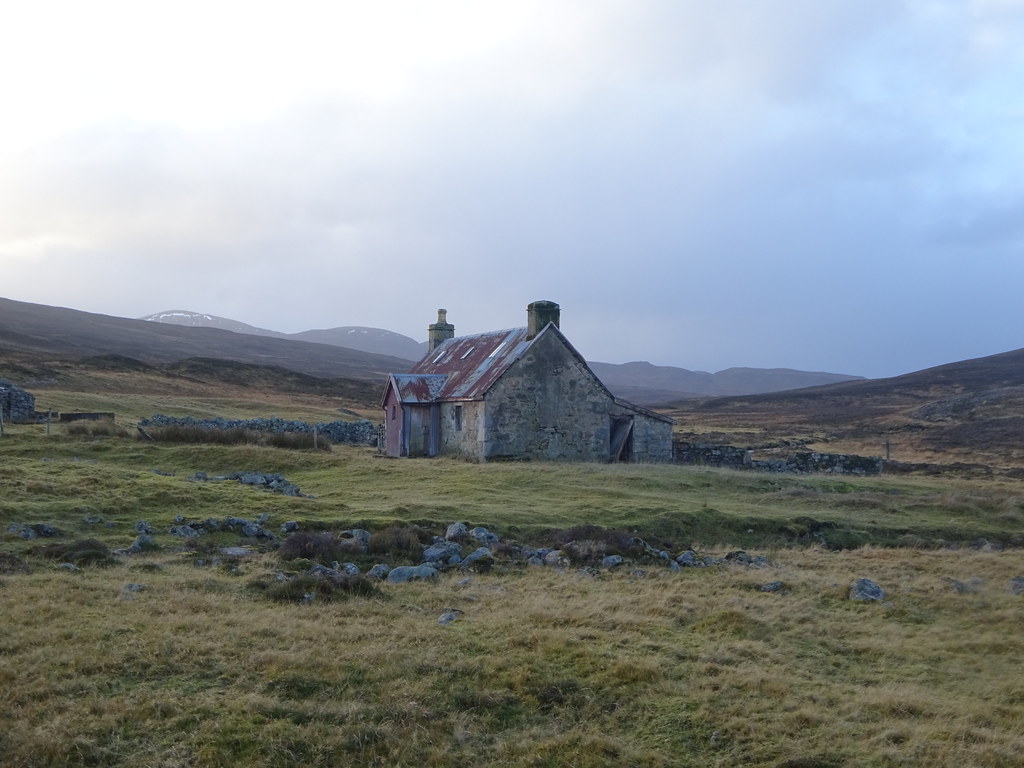 It was easy enough to get across the river for a closer look. The old farmhouse probably is used as a bothy but it is firmly locked. However there was an interesting photo display in the adjacent barn documenting the life of one of the last inhabitants and some of the other locals. I stopped outside for a late lunch before crossing back over the river to rejoin the track up the glen. 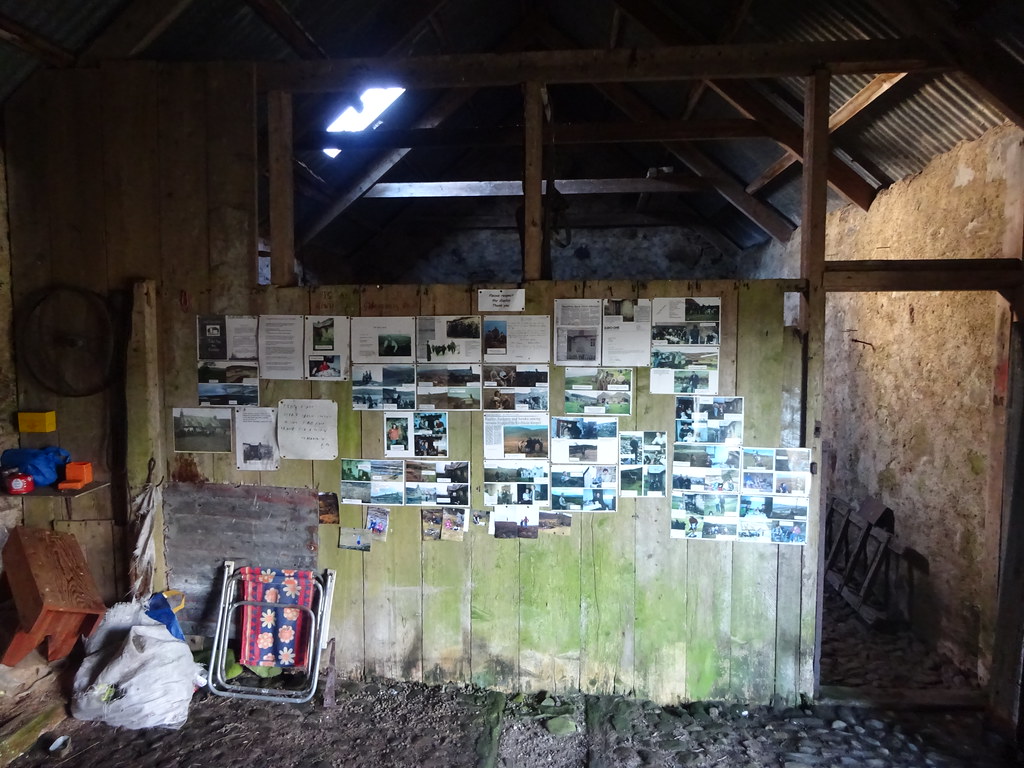 Display in the barn at Tighachrochadair 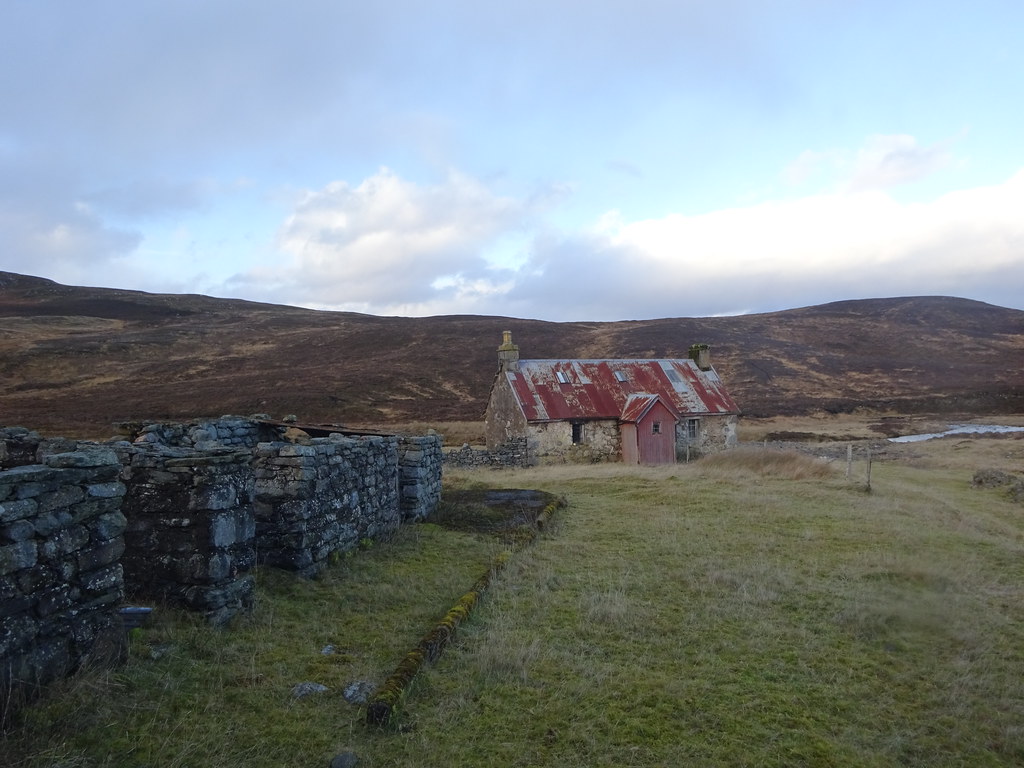 The connecting path was again mostly non-existent, and even the main track had turned to a path by this point, but once on it the going was easy. It seems that the paths in this area are largely kept from disappearing completely by mountain bikers these days rather than walkers - indeed my only other time in the vicinity had been mountain biking over from Struy to Loch Orrin in about 2006 (I hadn't diverted to Tighachrochadair that time). 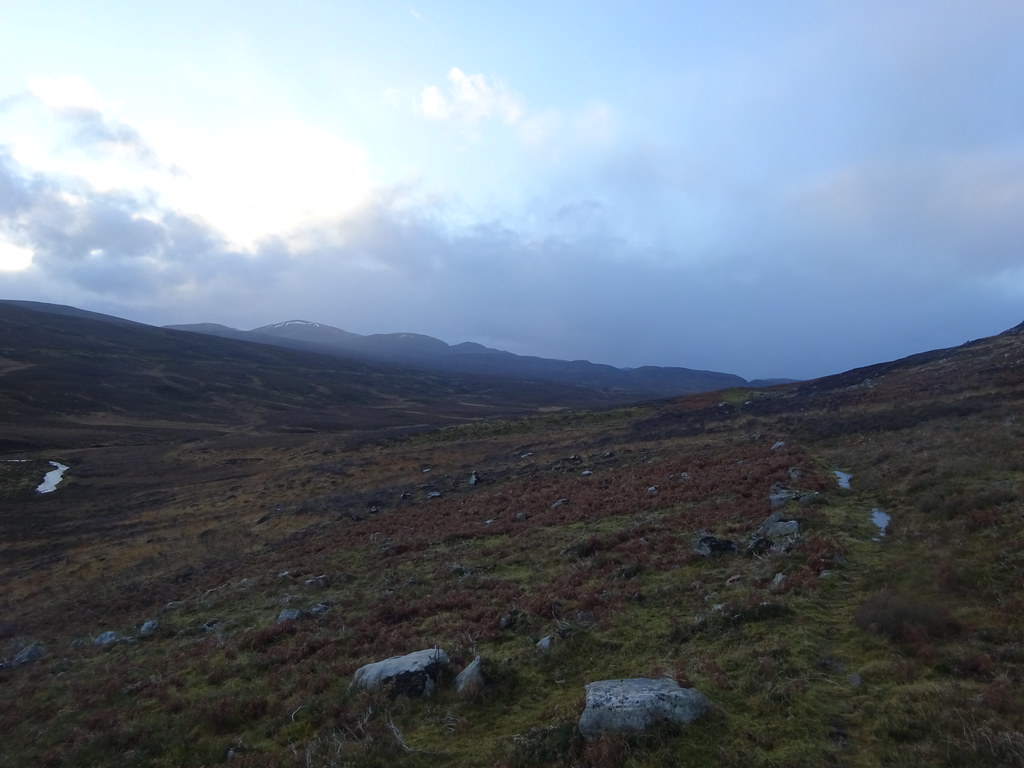 Back on the Gleann Goibhre path

Eventually the path joined the track that I'd previously mountain biked along - this follows an aqueduct which picks up many of the burns on the south side of Gleann Goibhre and deposits them into Loch Orrin. The track is well surfaced and pretty much signalled the end of any rough walking (although I did cut off a small loop of it at the extreme west of the route by going directly cross-country). There used to be a blockwork building along here that functioned as a bothy/shelter but it has now been demolished, leaving just a concrete base. 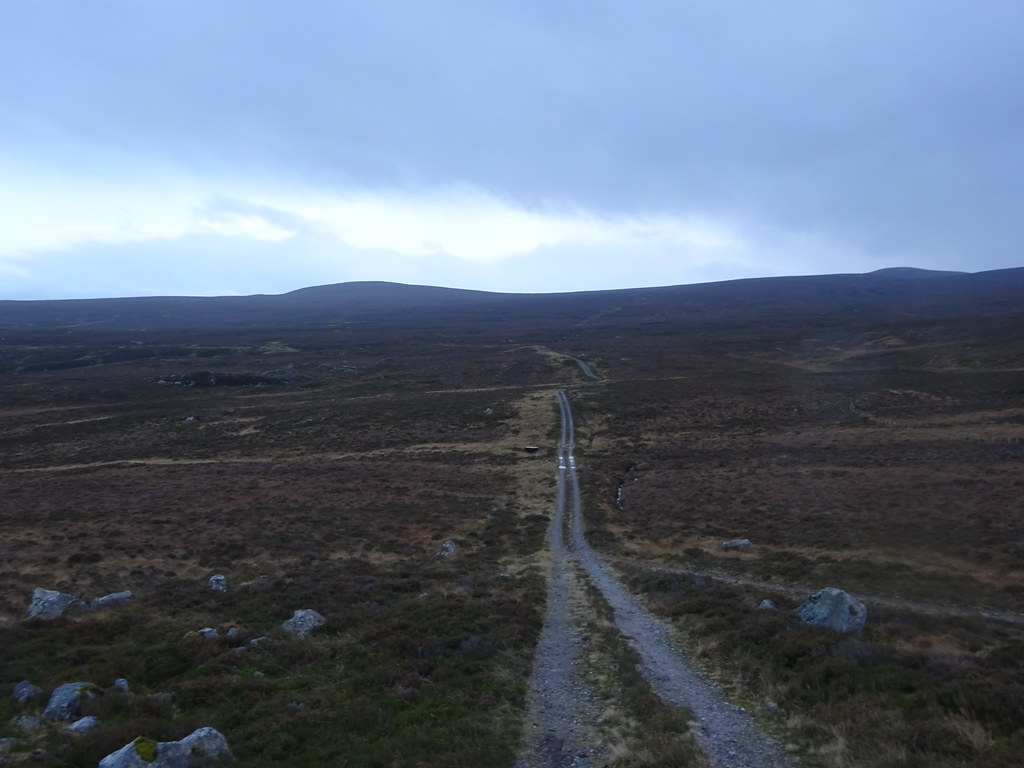 Hydro track at the head of Gleann Goibhre 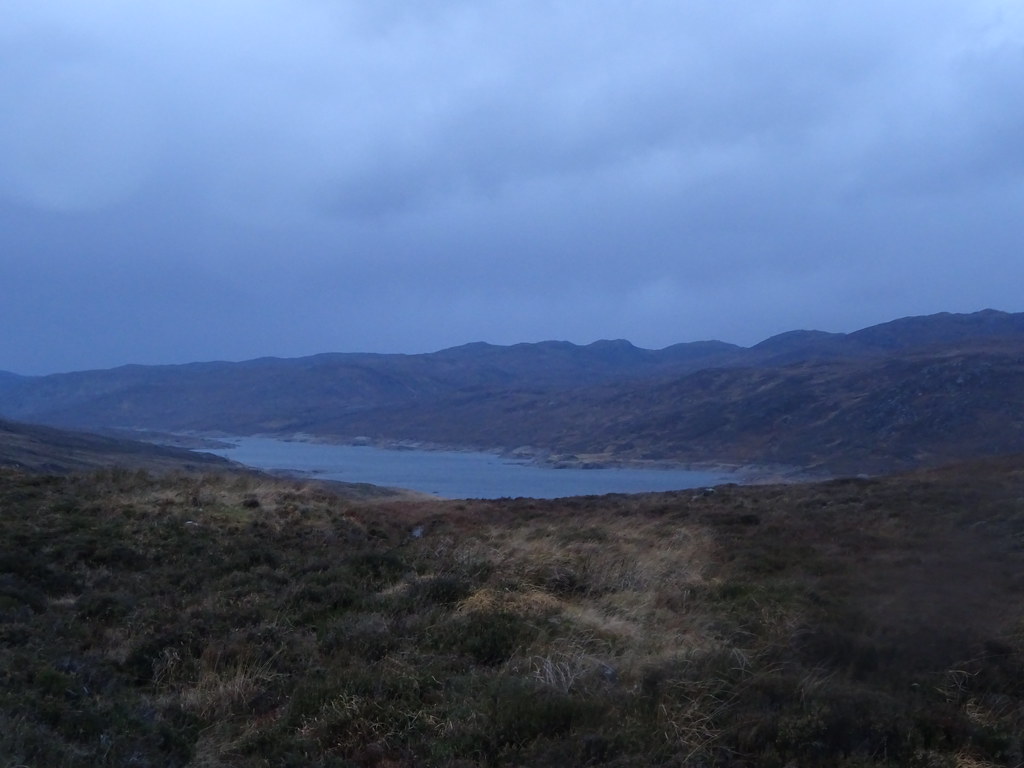 It took me longer to reach the Orrin dam than I expected as it is still a good mile from the high point of the route. By now it was almost dark but I knew the remainder of the route would be on tarmac. The main dam was bigger than I remembered. 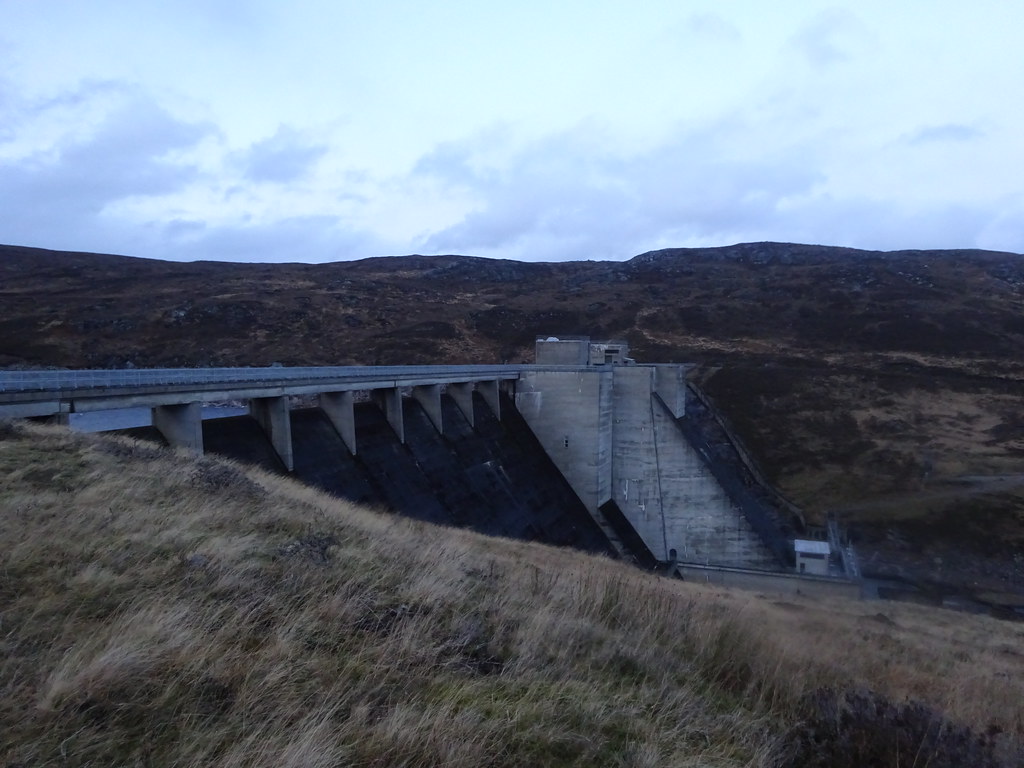 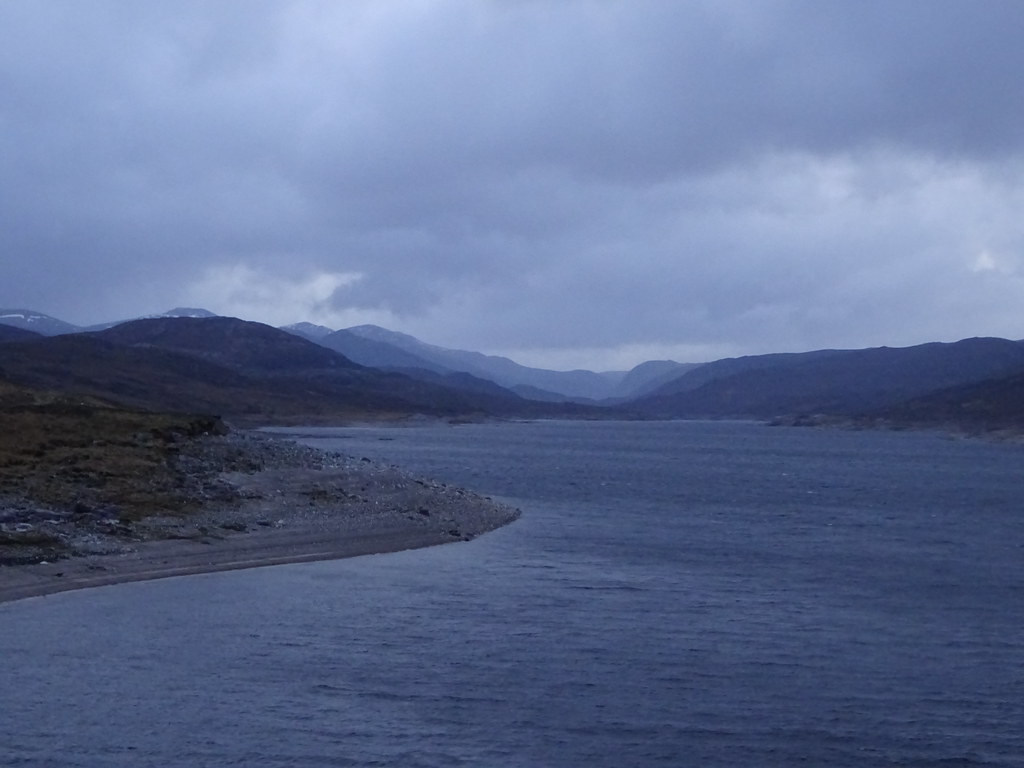 Loch Orrin and the Strathfarrar hills

The walk down Glen Orrin is probably in some of the nicest surroundings in this area, but it is also 5 miles along dull tarmac. Since I couldn't see much at this point, I pressed on to get back as soon as possible. In daylight there may be some interesting diversions to be made onto the moorland around the Fairburn windfarm to the north.

By the time I reached the car I was over an hour later than expected and it had been dark for a while. Fortunately I knew Jackie would have lost track of time so wouldn't be wondering where I was!

Great little hills, we call them "our local Culs".

There used to be a good car park in Aultgowrie, but the estate closed it when COVID restrictions started in 2020 - and it was never reopened. Sure, better if people park on road verges

We did some top-bagging around Fairburn windfarm in lockdown (my old TR HERE), but I agree, this area has potential. Good for windy days when higher hills are out of reach.

Happy New Year from me and Kevin