A wheely nice way to climb the Gaick Pass Corbetts

A wheely nice way to climb the Gaick Pass Corbetts

Corbetts included on this walk: An Dùn, Maol Creag an Loch (A' Chaoirnich)

Continuing the better than average summer weather in 2021, yet another period of high pressure was forecast for 4 or 5 days, so I searched online for any campsites that had vacancies - all full except for Cannich. That was quite fortunate as I hadn't climbed any of the Corbetts in that area.
So I set off bright and early from home in NW Cumbria on my 8th Corbett trip of the year and was soon heading up the A9 in glorious sunshine. I like to take in a hill or two on my way to where I'm going to be based, so the two Gaick Pass Corbetts were an ideal choice.
I exited at the sign for Trinafour and parked just off the minor road a few hundred metres from the junction. Setting off on the bike at 11am in warm sunshine, I crossed the busy A9 and went up the estate road signed for Gaick Pass. The going was good all the way to the derelict Sronphadruig Lodge where I locked up the bike by the end of the fence.
An Dun looked dauntingly steep straight ahead and so it proved. I crossed over the mere trickle of a river just beyond the lodge, then crossed it again further on at the foot of An Dun on stepping stones. I followed the intermittent path for most of the ascent and it was very steep in places but quite manageable. I stopped halfway up to rest, have some food and enjoy the views opening up to the south. At around 12:30pm, with a fair amount of cloud obscuring the views, I reached the south top and then walked over to the north top which is given the same spot height on the OS map, so either could be the true top! View south from halfway up An Dun Summit 'cairn' on An Dun

From the north top I gazed across to the seemingly impregnable west face of Maol Creag an Loch, and as others have done, decided that a grassy defile/rake just to the left of a large area of scree looked feasible. I certainly didn't fancy going back down An Dun's south ridge and climbing the other hill via its SW ridge - I do like a circular walk if it's possible! Creag an Loch from its northern end

So I set off down the north ridge which was nearly as steep as the ascent path - it wasn't a pleasant descent, as I steered around crags and steep drop-offs but eventually reached the northern end of Creag an Loch. I was aiming for the aforementioned grassy rake to the left of a large scree fan just level with the end of the loch, so I crossed the outflow of the loch and worked my way across to the steep hillside. Sometimes from a distance a steep hillside looks impossibly steep but is actually ok once you start up it - this one was very steep but by zigzagging, progress wasn't too hard, just a long slog. With much relief I reached the top of the climb and was pleased to see I was nearly level with the summit. Shortly I was at the tiny summit cairn (labelled as A' Chaoirnich on maps) and was glad the clouds of earlier had dissipated. 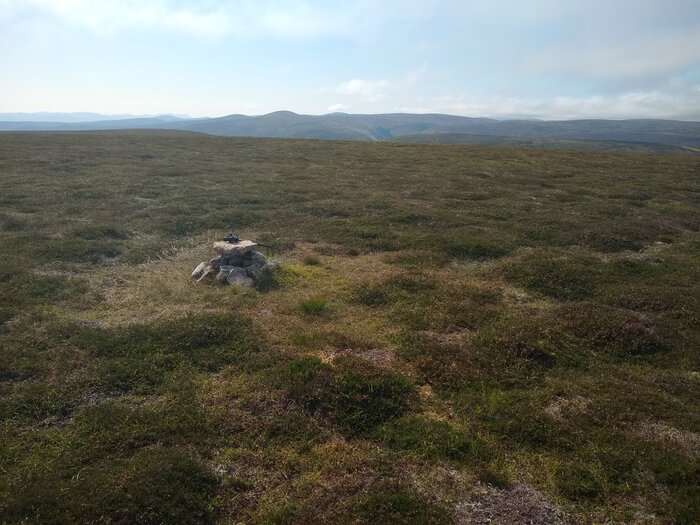 Even smaller summit cairn of Maol Creag an Loch After a brief rest and second lunch, I set off in a southerly direction and suddenly in front of me, about 200mtrs away, a very large herd of deer crossed from left to right. I took a few hurried photos with my phone but really needed a proper camera to zoom in on them. A bit further on, another smaller herd also crossed my path but again too far away to see details. I headed over to the southern top which is only 8mtrs lower than the true top but has the larger cairn. From there, I headed SW for a bit on easy slopes and an intermittent path and then descended more steeply towards the end of the loch. When I was level with the edge of the fenced-in woods, I zigzagged down a steep bit of heathery hillside to a flat area of peat hags which were thankfully mostly dry, then it was just a few minutes from there back to the bike.
It only took me 30 minutes to cycle the 9km back to the car which I reached at 4pm.