These two hills are usually climbed from the north from Corrie Hallie via Shenavall bothy, or from Gruinard to the northwest, but an easier and slightly shorter day is possible when climbing from Carnmore Lodge, just over the causeway at the east end of Fionn Loch, where I was camped.
The previous day I had driven from Glencoe to Poolewe then hiked in to the eastern end of Fionn Loch, stopping off en-route to climb Beinn Airigh Charr and then climbing Beinn Lair once I'd pitched my tent. After a good night's sleep I took my time over breakfast, waiting for the few early morning clouds to dissipate. At 8:45am, I set off across the causeway, passed Carnmore Lodge and then took the stony path up to the valley of the Allt Bruthach an Easain. To my right the impressive bulk of A'Mhaighdean soared and further along, its close neighbour, Ruadh Stac Mor came into sight. Within an hour of starting, the clouds had dissipated , and I enjoyed unbroken sunshine and blue skies for the rest of the day. 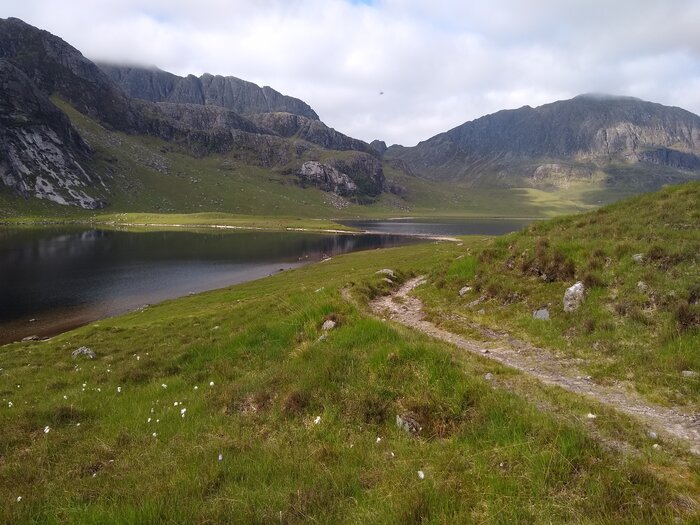 A'Mhaighdean above Dubh Loch from just above Carnmore Lodge

The path climbed gradually until reaching Lochan Feith Mhic'-illean, the sun glinting off the wavelets lifted by a gentle breeze and with the backdrop of the high peaks off to the east. A few stretches of sand got me thinking this would be a fabulous place to wild camp. Lochan Feith Mhic'-illean with Ruadh Stac Mòr on the right

Walking was easy with the path being mostly dry underfoot with just the occasional boggy section to steer round. Further on, the peaks of the two Beinn Deargs popped up over the hillside but still looked fairly distant. Eventually, the path veered round to the left and Loch Beinn Dearg appeared, with the two hills opposite. Looking east with Beinn a' Chlaidheimh in the distance

The path zigzagged down to a small cairn, where I veered off the path to the left and headed across large peat hags and boggy grassland to the head of the loch. I was hoping to find some sort of path on the northern side of the loch, but no joy. The day was hotting up so I topped up water supplies from the loch before making a slanting ascent on rough grass, heather and occasional rock outcrops to the bealach between the two hills.

At just after 12pm I topped out and set off NW to climb Beinn Dearg Beag first. This looked imposingly steep from a distance but was actually fine when up close - there were traces of a path but it was mostly a case of finding a way through boulders and rock slabs. I reached the small summit area after an hour and chatted to a couple of chaps who had come in from the Gruinard direction. A wonderful spot to rest and have lunch, looking out at the mountains and lochs, with the long stretch of An Teallach directly opposite looking very impressive. I managed to find more of a path on the way down (as is often the case!) and made it safely back to the flat area between the hills. Then, without pausing, I set off up the steep west face of Beinn Dearg Mòr, linking together grassy slopes and easy scrambling over rocky sections. Working my way round to the south side near the top, I reached the narrow summit plateau at 2:45pm. Met up again with the same two chaps who went off down to the northern end of the mountain looking for an alternative way down - I lost sight of them after a while and didn't see them again so presume they found a way down somehow. I stayed for a while at the top, enjoying the sunshine and tremendous views in all directions, including some amazing rocky cliffs just to the east of the summit. Summit with An Teallach behind Craggy prominence just east of summit - Beinn a' Chlaidheimh in mid-distance, the Fannaichs on horizon

Reluctantly, I set off down and was grateful to find a decent zigzagging path all the way down to the bealach. From there, I worked my way diagonally down the awkward slopes leading to the loch and then along the shore to the end, where I rejoined the incoming path for the 6km walk back to my tent. When I was just past the lochans I had the chance to climb Beinn a' Chaisgein Mor, just above on the right, however, I had climbed that previously some years before when doing the Fisherfield Munros, so decided to give it a miss - it certainly would have given me more great views, however my feet were telling me to just get back to the tent! Nearly back at the beginning

Feeling more than a little weary after two long days, I eventually arrived back at 6:45pm and stood in the loch to cool my aching feet. I had another long day planned for the next day, starting with the long walk-out, so just took it easy, eating and reading until time to turn in for the night.

On hindsight, this was one of the most enjoyable and satisfying days walking I had in 2021 - great weather, great scenery and excellent walking . Although I've now done all the Corbetts in that area (and Munros some years before), I'm sure I'll be back - it's a magical place and rewards everyone who makes the effort to get there.

Re: The two Fisherfield Beinn Deargs from Carnmore

A fine report on 2 amazing Hills

Re: The two Fisherfield Beinn Deargs from Carnmore

Many thanks Kev - yes they are real gems - still get goosebumps thinking about that day.