I had been getting bored with walking from home, but there was little I could do about it, since I didn’t have a driving license. I had a reminder from the DVLA that I needed an eye test in November. My sister said “That’s odd, your birthday is in May, I’ve just got a reminder for a January birthday. Check it.” I never like being bossed about by my elder sister, so it was a week or more until I did, and then discovered that I had been driving illegally since May. The new license took seven weeks to come from the eye-test while I was having nightmares about having to go and live in bus-land. When my father-in-law was finally put off the road, he used to drive his car up and down his very short drive, and then he would drag himself onto a bus, any bus. Since he couldn’t read their labels, each trip was a magical mystery tour. Would this be my plight? Then, the license arrived. First a visit to see daughter and grand-kids, then I could try a hill.
January 27th was a perfect day. I had read of someone who had not only done the Seven Fife Marilyns (as I had) but the top ten highest Fife hills. I had toyed with the idea of adding his Knock Hill, Saline Hill and Lumbennie hill to my round as he had, so this was a reconnoitre .
It didn’t start well. The lady at the farm at the bottom of the zig-zag track up Knock Hill said I couldn’t park there. It was private land and the tractors were in and out all the time. She directed me back to the Knock Hill racing circuit car park. 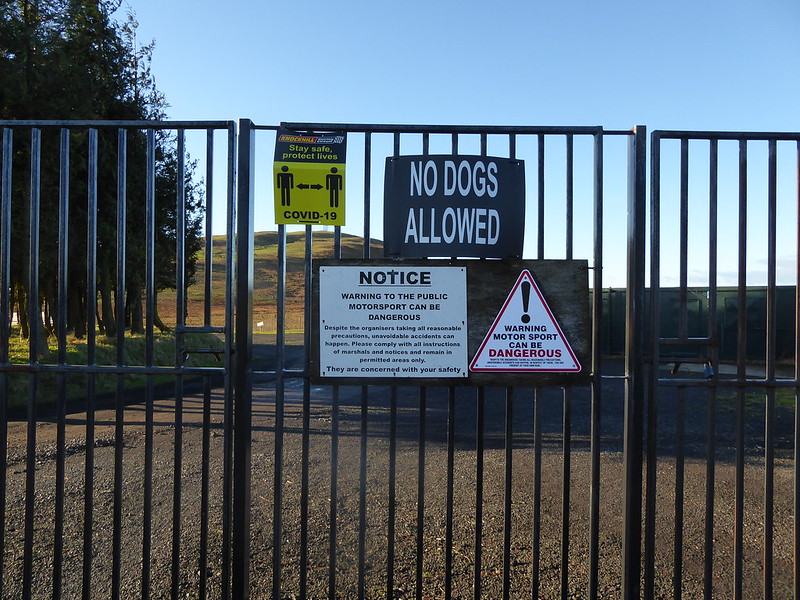 It didn’t add a great deal to the walk 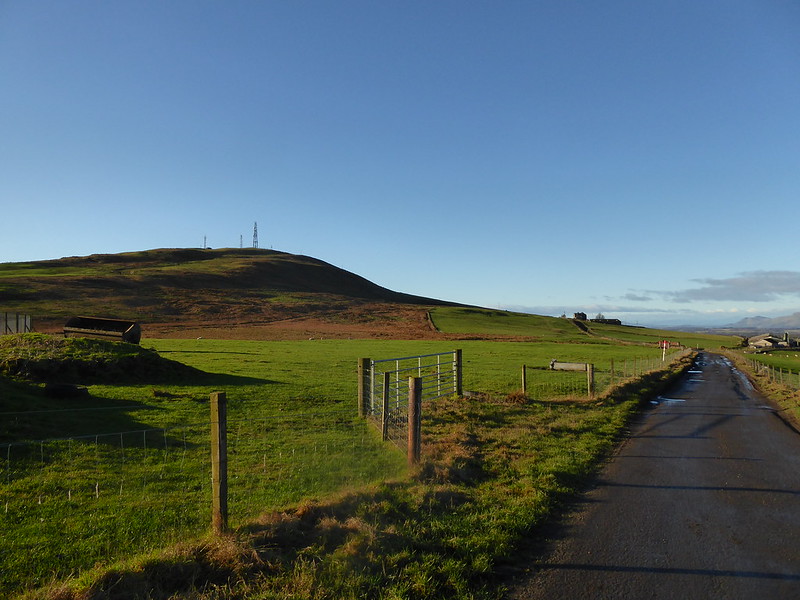 She also told me that the path up the hill from the door was off limits: that was private too. 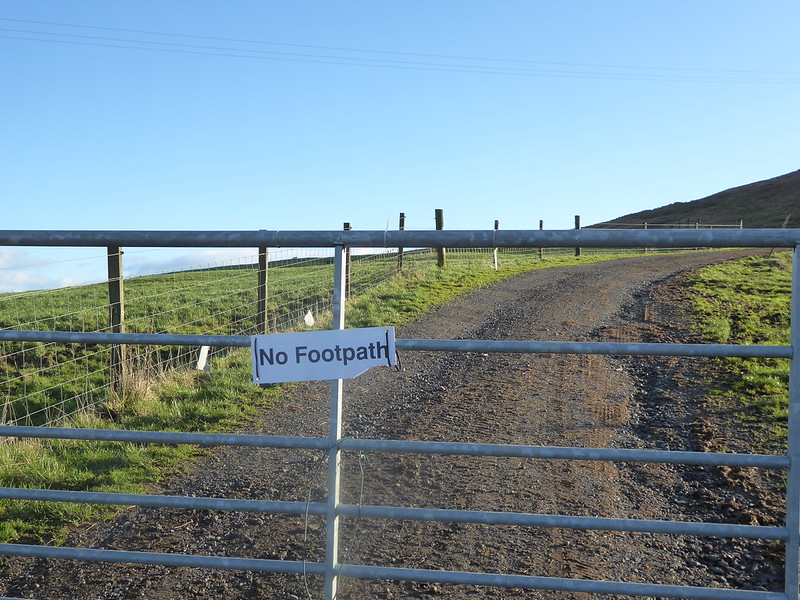 I remember climbing that way when I had been bagging all the Fife trig points, but we couldn’t have met anyone.
She directed me to the “right of way” going past the farm. The gate looked a bit unfriendly, so I just climbed it. 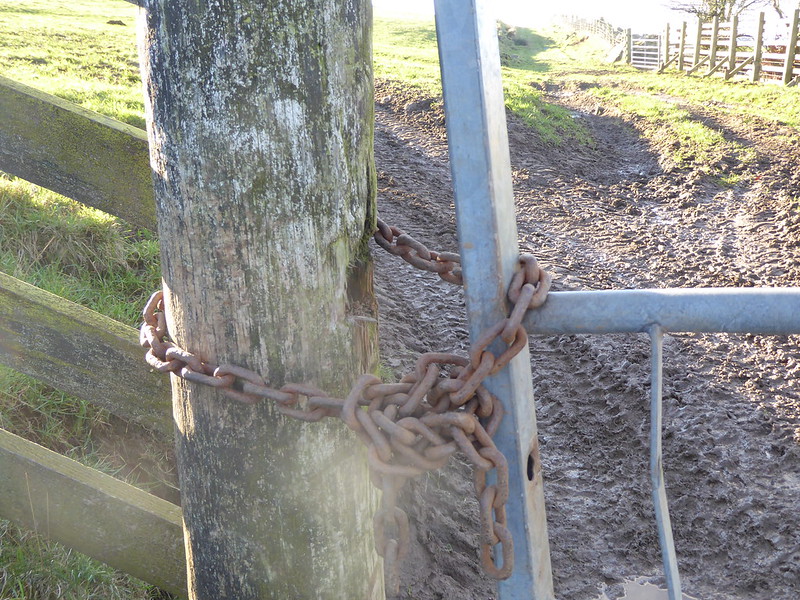 As I had thought of coming back that way, I set off. The muddy path turned into a climb, and I encountered a fence. There was no opening in it as might be expected in a “right of way”, so I climbed it. 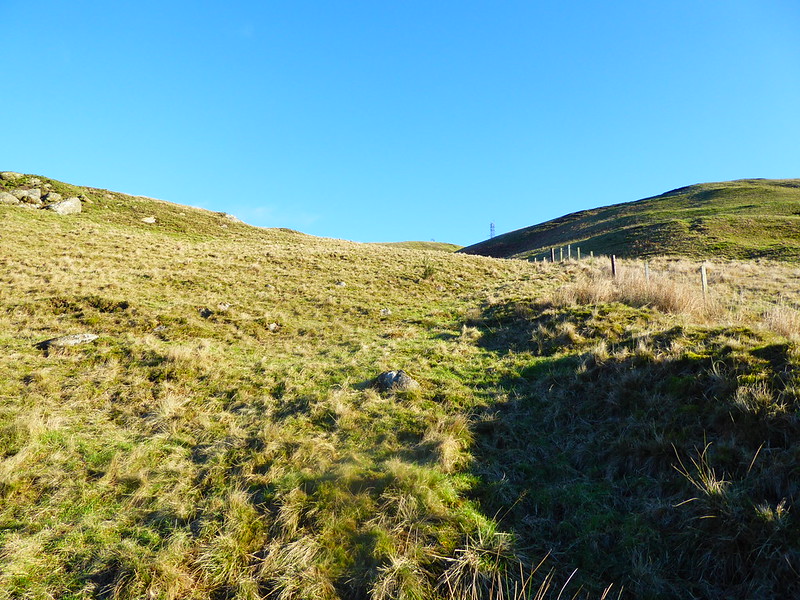 ATV tracks followed the cleft in the hill. 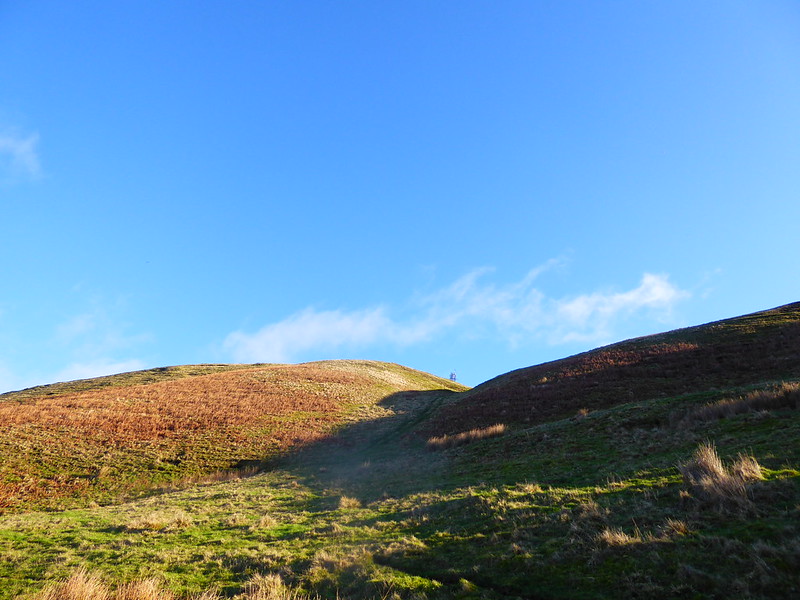 By then I was regretting forgetting to bring my stick, and also forgetting to change my photochromatic glasses…everything looked black. I took off my woolly hat and pulled my hood down which improved things a little.
At the top are masts, but it was possible to take a photo without getting them in. 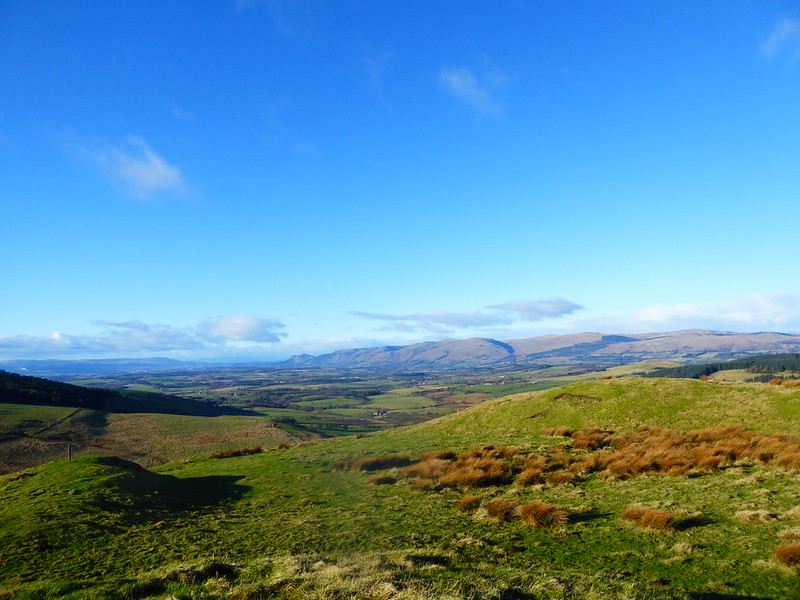 Looking ahead to East Cairn Hill and Saline Hill 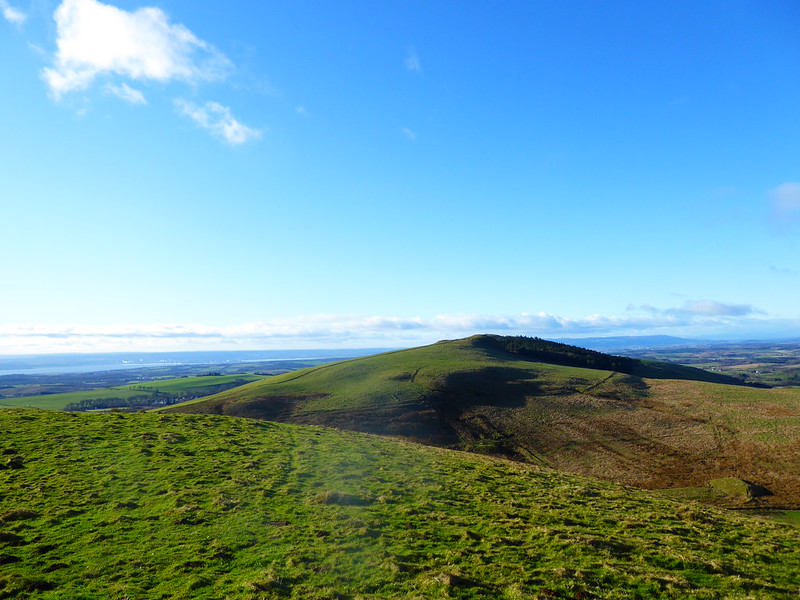 I was sure I remembered reading a TR on these hills, possibly Fife Flyer, and should have checked how they did it. I just went straight down without a path and hit the drainage ditch flowing downhill. It had been newly dug out with steep muddy sides and what looked like old fencing the other side. 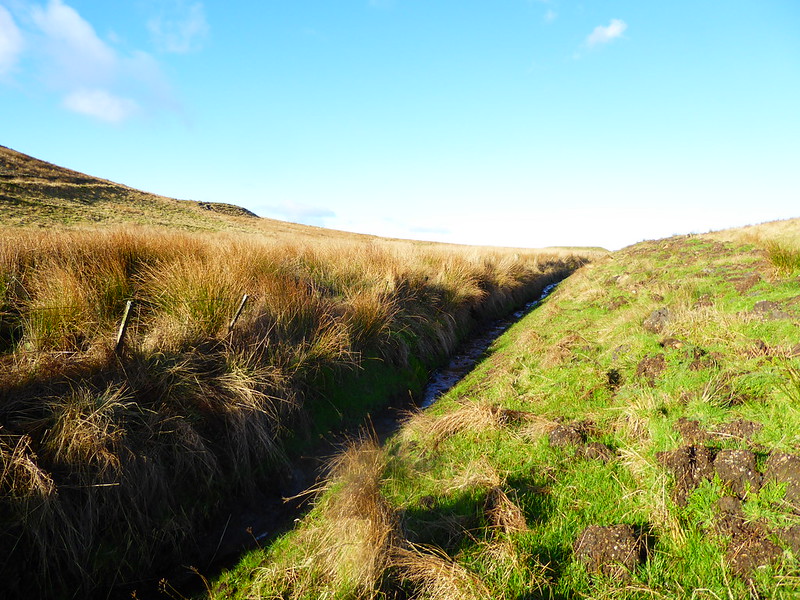 I walked upstream until a wooden extension to the earlier fence I had climbed went over the ditch
It was slow walk squelching through the rushes and my boots got filthy. 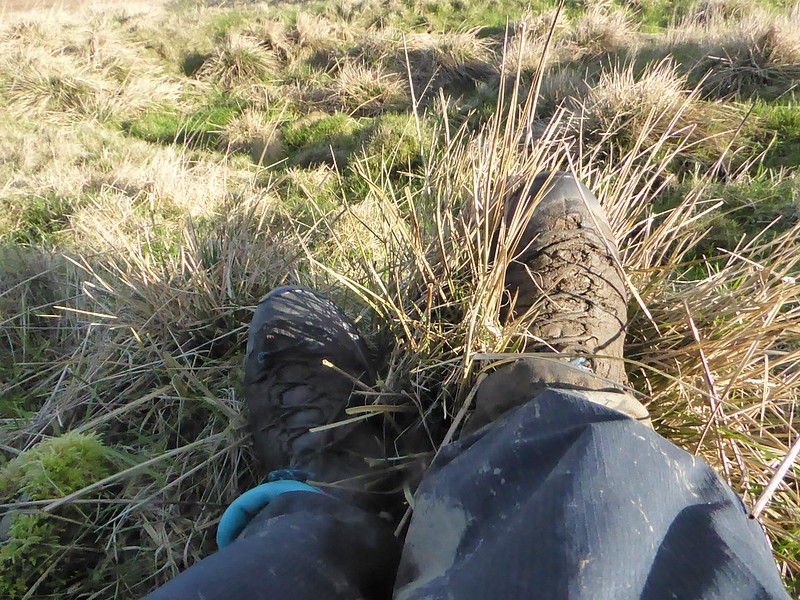 It wasn’t quite such a steep pull as Knock Hill 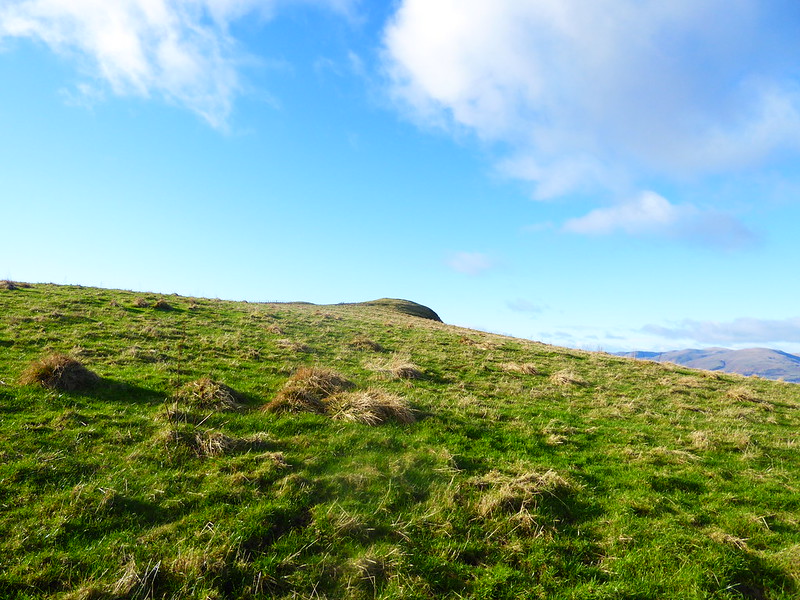 Nearly at East Cairn I spotted the dread barbed wire, so sat down to have lunch. Looking back. 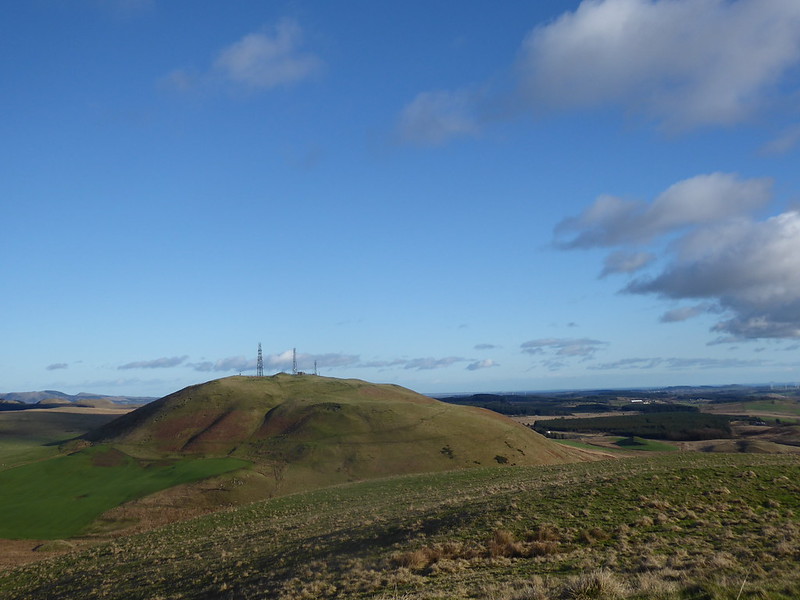 Had I been with R, one of us would have stripped off a fleece and added a sitting mat, and we would have got over one way or another
.However, I have developed a new wimpishness, and decided that the shadows were growing long, and it was time to go home. 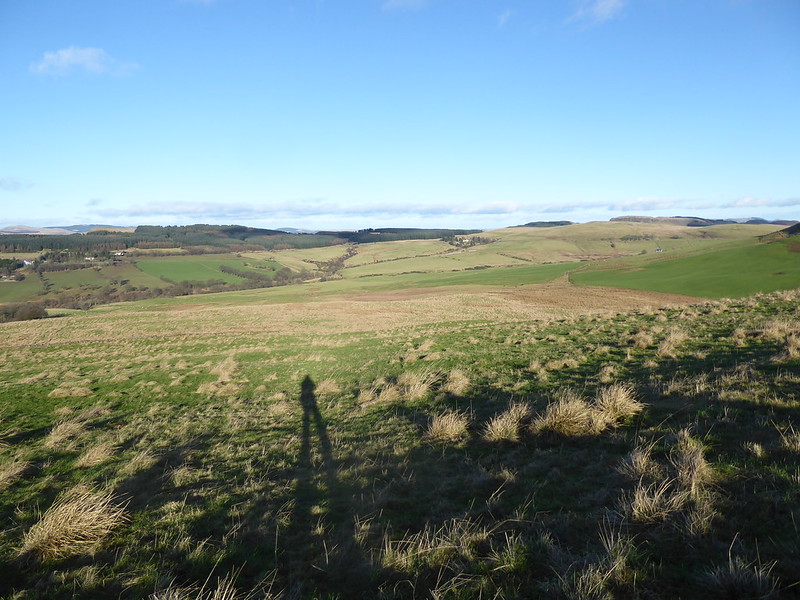 The thought of having to phone for help while tangled in barbed wire was not appealing. 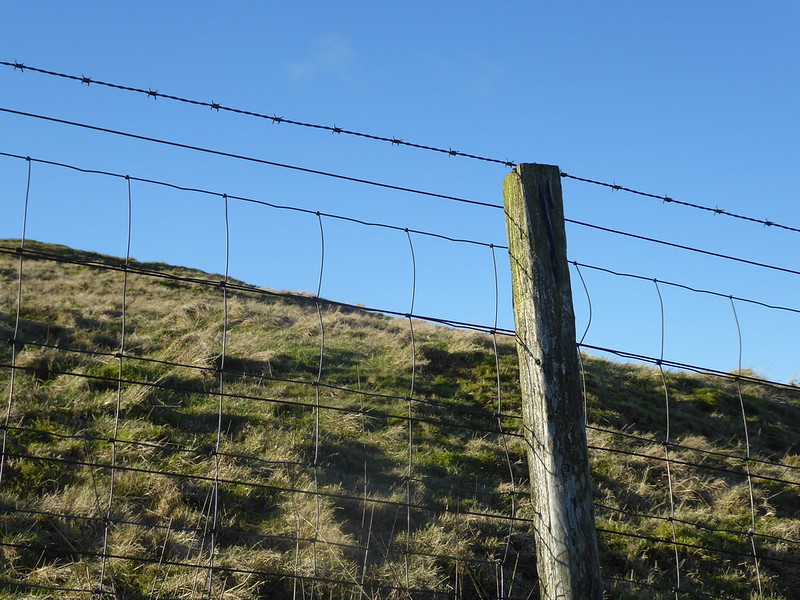 Another very wet section before I could get into reasonable walking and another crossing of the ditch in the same place.

It’s unfair to judge these sheep because they look like thugs, but I far prefer the black faced ones 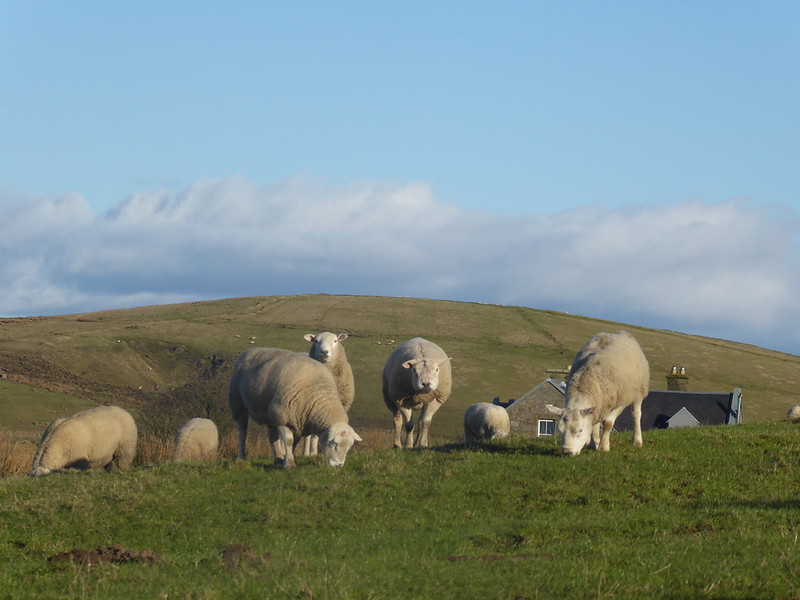 So I don’t think I will be adding these hills to the 7 Marilyns. Friends have already contacted me to suggest coming too in the summer and making it a fund raiser and having done them three times now, why not add a fourth?

Quite a challenge, well done - barbed wire, bogs, drainage ditches, private tracks, and gangster sheep - can see why you decided against adding them on. Still, at least it was nice day to get out and so much better than working from home

Sgurr wrote:It’s unfair to judge these sheep because they look like thugs,

Not unfair at all - that one in the middle looks like evil personified!

Respect for taking all that on - and at least you know the leave them out next time.

Excellent stuff, well done for getting out.
Interesting that you did the hills in the opposite direction, they are probably some of the better "Tumps" in Fife.
One thing we definitely don't miss now we are back among the bigger hills is barbed wire fences, in fact another thing is gorse bushes and plenty of it on lots of hills almost as bad as the fences.