I had looked out another easy Munro for today’s walk, something that would allow me to get up and down fairly quick and back home in time for the football that evening.

I left home at about 06:30 and headed towards Loch an Daimh. The drive up was beautiful. I have been up glen lyon countless times on the motorbike, heading towards Aberfeldy from Ben Lawers and have never driven up the glen in this direction. The scenery on the drive was majestic and was exciting me for the walk that lay ahead. Some deer I passed on the way up the glen

I reached the junction where I was to turn right to head up to the dam and after passing an old wooden gate, I was met with a newer looking metal one. Don’t let this fool you into the road being closed, it's only there to stop animals getting into the forest they are trying to regenerate and destroy it. A minute or two past the gate and I was at the dam. I parked up, got out the car and layered up with waterproofs. There was a strong breeze in the glen with some stronger gusts. What was it going to be like at the top I wondered?

Suited and booted I set off up the track and after about 5/10 minutes I saw to my right the track taking me off the rocky road I was on and up the side of the mountain. From the get go, the path was wet and boggy, nothing like what was to come though, but at least it was easy to follow. As I climbed, the views of the loch behind me were amazing. With Stucd an Lochain to other side of the loch the views were quite dramatic. The loch too was looking amazing tucked in between the surrounding mountains. A truly beautiful landscape with a quite remote feeling to it (even if the car is parked just at the bottom and there’s no walk in as such Looking up the mountain track Looking up Loch an Daimh

The climb up isn’t too steep at all but the path was fairly wet and in parts, total bog. Walking over some very wet ground, all of a sudden my foot went into the ground. Bog, mud, I don’t know but it was up to my knee anyway. Thank God for Gore-Tex. Continuing up the saturated track I reached the point where the gradient somewhat shallows and had to traverse the peat bog highway which sits on the side of this hill. The ground was covered in footsteps so there was no way of getting lost really. Surely all these boots prints were headed in the direction of the summit? Continuing up the track towards an impressive large rocky outcrop The peat bog highway. There were mnay parts like this, some larger than this one pictured

Having past the worst of the peatbog I reached the dip between Meall a' Phuil and the Meall Buidhe summit plateau and thankfully again the path dried out a bit and remained distinct. A quick walk up this last bit and I was on the plateau. Up here, more exposed, the wind really started to blow and I needed to get another layer on as I could feel the wind chilling me. I guess the wind was somewhere about 30 mph as it wasn’t quite enough to put my balance in doubt but I can honestly say I've never struggled more taking jackets off and putting them back on over more layers in my life.

Layered up I made the final short walk to the summit and after about 10/15 mins of walking and photo taking I had reached it. Sadly, no views from the top but this doesn’t spoil a day out in the mountains for me. What did make me a bit sad though was seeing the state of the summit. Cigarettes everywhere 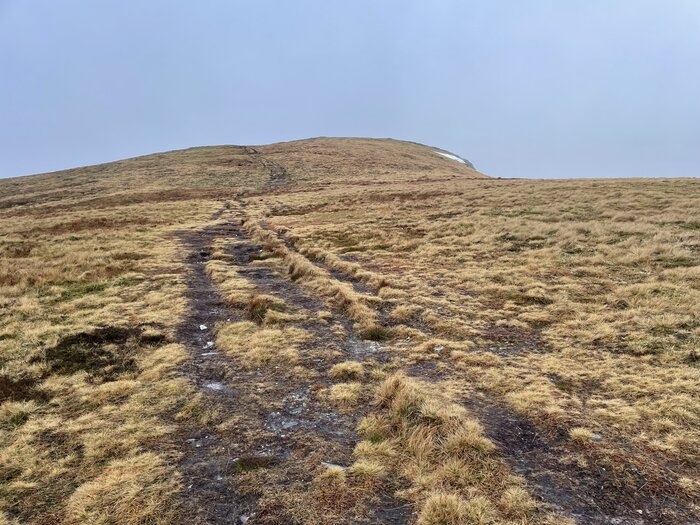 The final climb to the summit plateau Walking along to the summit Looking down into Glas Choire Two hours and fifteen minutes it took me to reach the summit (a far few photo stops on the way). I had an early lunch (was about 11:15) and the headed back down. I traced my footsteps back to the other side of the plateau and down to where the "peat boy highway" was.


Coming down through the clag I tried to retrace my footsteps but found myself on another path, one which I read about in Ralph Storers ultimate guide to the Munros. This path is another well-defined one (in most parts) once your on it but I reckon it can be a bit tricky to find, along with the other path down, in poor visibility. The featureless land where the peat bog highway is would be very easy to lose yourself in if you were here in the fog or dark without a map, compass and/or GPS. Heading down in the clag 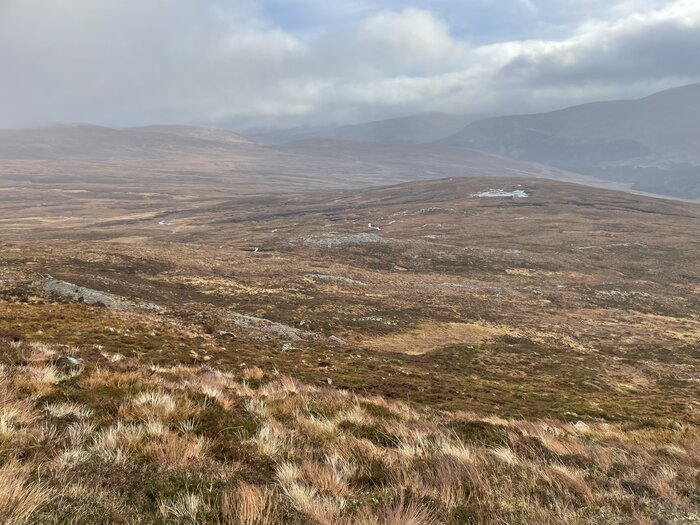 Looking over to the path I'd came up. Cant really see it unless you zoom in

As I continued down the side of the mountain, the views were again spectacular and I spotted some sheep being herded by a sheepdog on the slopes beside me. Amazing how these dogs do it. Reaching the bottom of the track and back to the rocky road at the bottom meant I was only five minutes or so from the car and at the end of the walk. 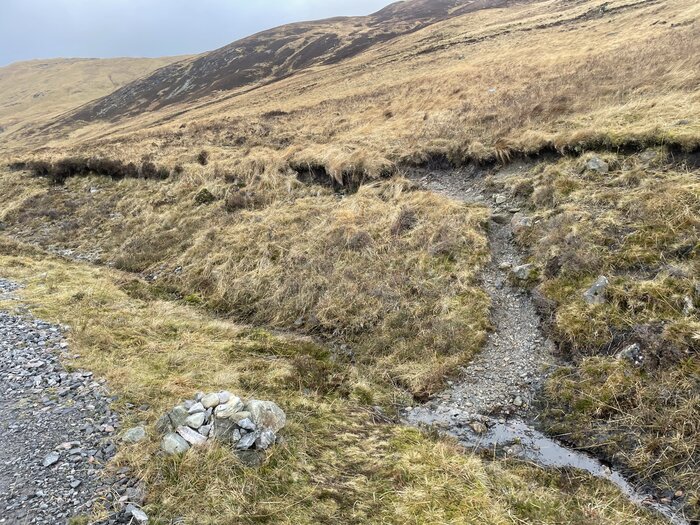 The start, or finish depending on what path you go up, of the path that I had came down. This is about a minute or two's walk past the path I had headed up, walking westward. 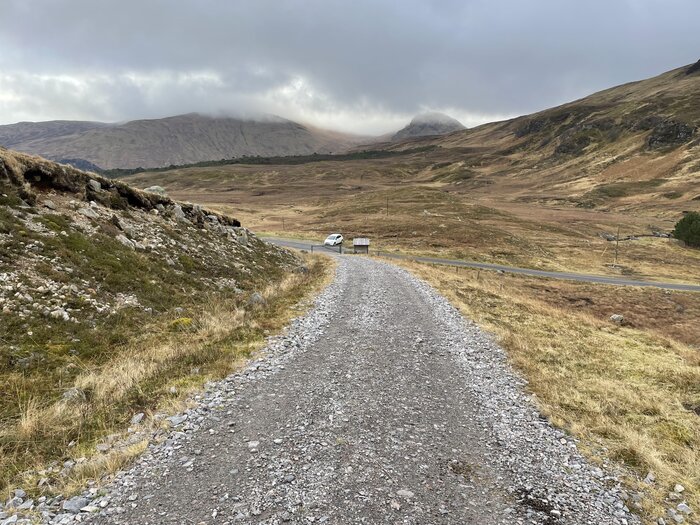 Back at the car. Mines was the only car there and I had the hill to myself all day

A quick one today & had I not have had plans that evening I would have been up Stucd an Lochain as well but it will remain for another day. I certainly won’t complain at having to visit this beautiful part of the country again.

Re: Galavanting in Glen Lyon

Nice report on an underrated hill. I enjoyed it even though like you I missed out on the summit views. I agree about the “peat bog highway” - on the way down I came out of it at the wrong place and had to work my way back to the path. A little mini-Bermuda Triangle.

Stucd an Lochain is I think worth keeping for a different day, and taking your time over it - it’s an easy but superb walk with great views near and far.