our_route.gpx Open full screen  NB: Walkhighlands is not responsible for the accuracy of gpx files in users posts
Thursday 23rd Sept.
A return to the Cairngorms, first time for a couple of years. With covid restrictions Backpacking trips had been few and far between, limited to a few 3 or 4 day Lakes trips. Those who know me, under this name and previous of Guinessman will know that my Backpacking trips are usually solo, however this time I had company, Steve who I had walked with for 17/18 years. I normally get the train for a trip but this time I took the car and we travelled from Newcastle on a lateish start and we were in Blair Atholl for 1pm parked up at the Old Bridge. I intended leaving the car for around 9 days so I put a few quid in the donation box. I knew tonight's camping spot, just beyond Forest Lodge, a spot I had used numerous times over the years so it a leisurely walk up Glen Tilt getting to the spot just before 6. I had recently changed my tent, from the TN Laser comp that I had used for 9 years to a Hilleberg Enan. Steve was using a recent purchase, a Nordisk Telemark 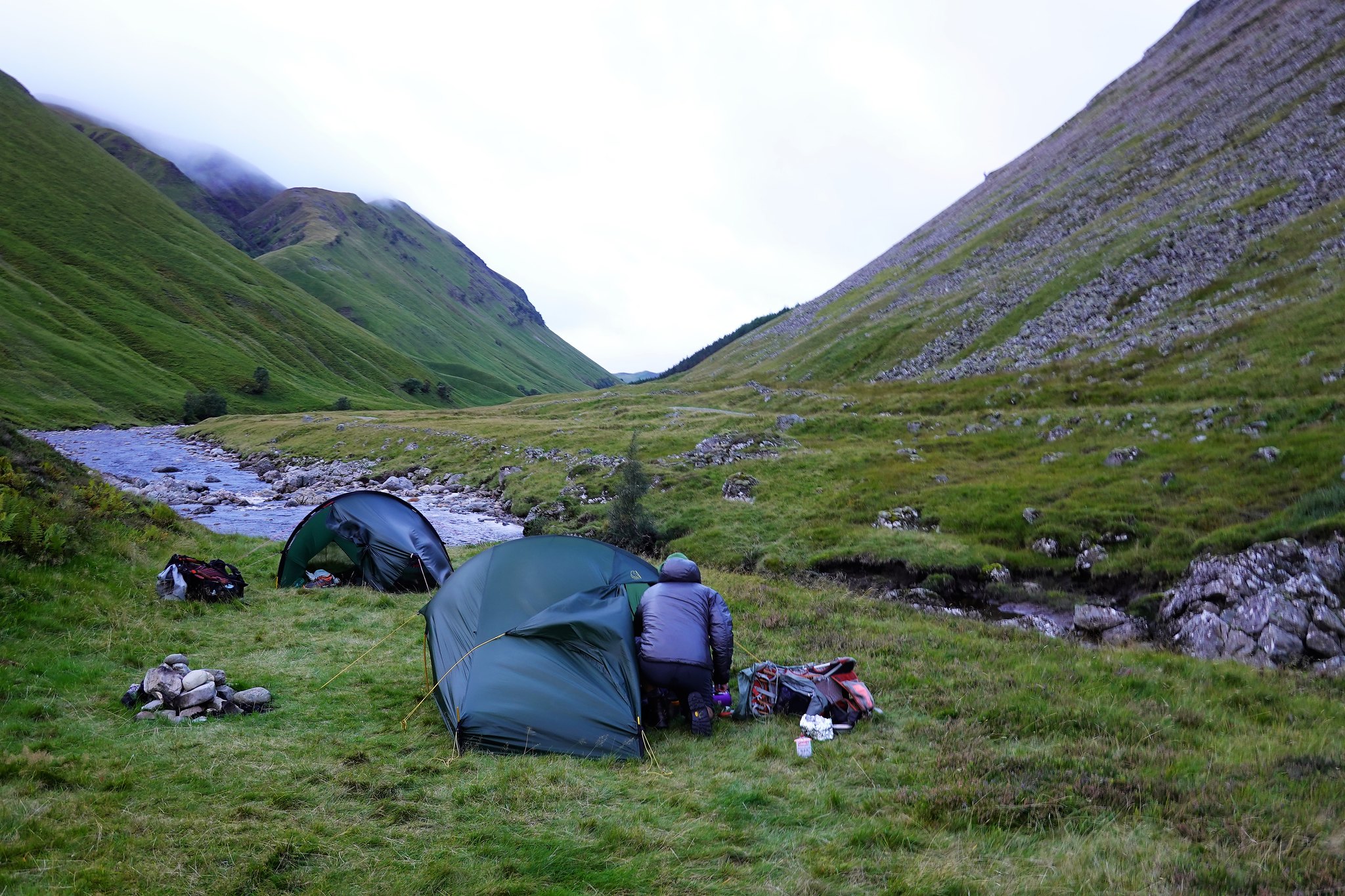 DSC01227 (2)
Friday 24th Sept.
Next morning dawned quite warm and still. We made our way up to the Bedford bridge and Fall Of Tarf then cut East across the hillside towards Fealar Lodge, a new section for me, then SE and then through the col between Carn an Righ and Mam Nan Cairn and onto to Loch Nan eun which would have been a fine camping spot but the plan was for a bit further, so it was an untracked contour of Creag Easgaidh on the north side and down to the Allt Elrig before an ascent of Coire Cladhach and onto Carna Gheoidh, Carn nan Sac and then onto the unnamed lochans to the NE. Steve found 2 decent camping spots up on the shoulder above the lochans. 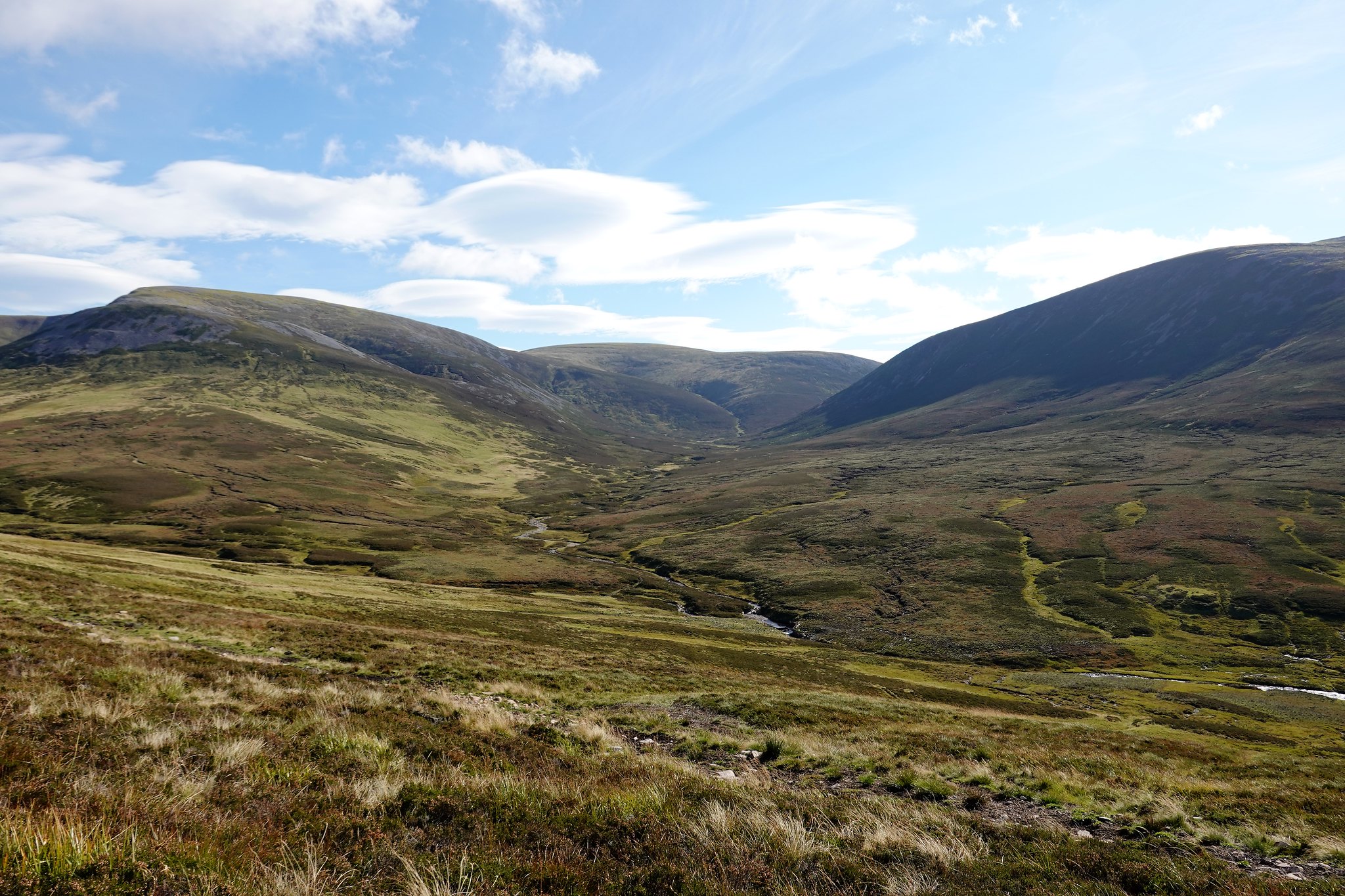 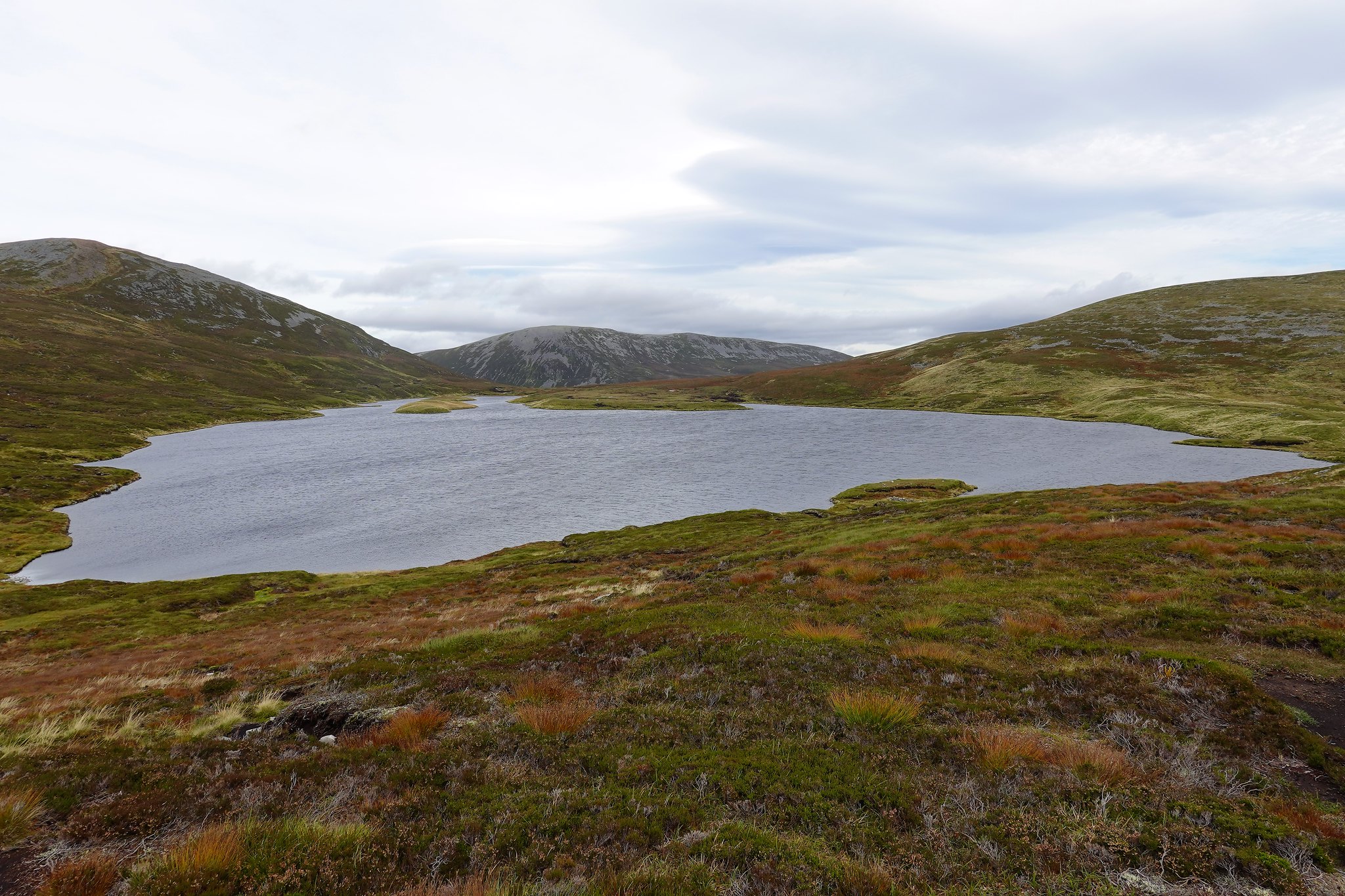 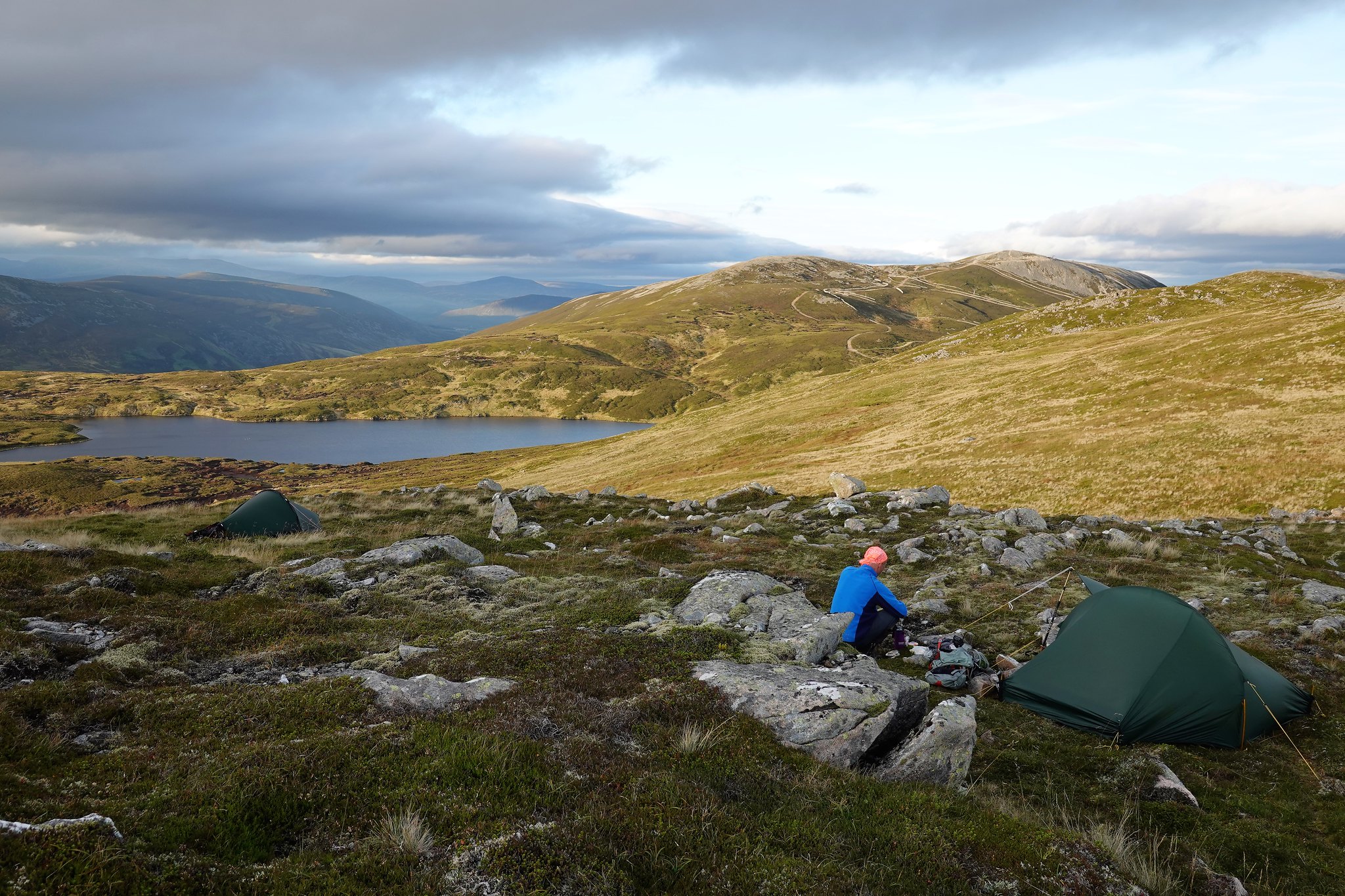 DSC01256 (2)
Saturday 25th Sept.
Saturday initially was clear as we got sorted and then made our way in the mist up onto the Cairnwell and then across into clear skies onto Carn Aosda. Loads of people around, these have to be amongst the most popular of all the munros. We made our way down to the car park area and used the cafe for a break. The hills had by now clouded over and as we made our way up onto Glas Maol the wind picked up considerably. The original plan had been to camp up by the Fafernie area so it looked as though that might have to be reconsidered. We stayed in the mist and wind as we made our way over to Cairn of Claise, Tom Buidhe, Tolmount and onto the Knaps of Fafernie. I had used OS locate a few times before and we did this time as well, but also a first for me, Steve had digital mappping so that came into use as well. I knew the directions but in the thick mist and featureless ground it would have hard work without either. We got to Fafernie and then started thinking about camping spots. Our plan had been to stay high to take in Broad Cairn and Cairn Bannoch either that night or in the morning and leave ourselves high for Lochnagar but the weather was foul so we walked NE and then dropped down to the high ground above the Dubh Loch for a high camp. Steve had developed a problem with his tent, one that never really got resolved. The small poles are in a sleeve on the corners from which they can be removed to form a large pole. When in situ however the tent wouldn't tension as the sleeves wouldn't stay high enough and consequently if there was a wind the tent wall billowed in wetting the insides. In the event we had try and forecast the wind directions to ease the problem. 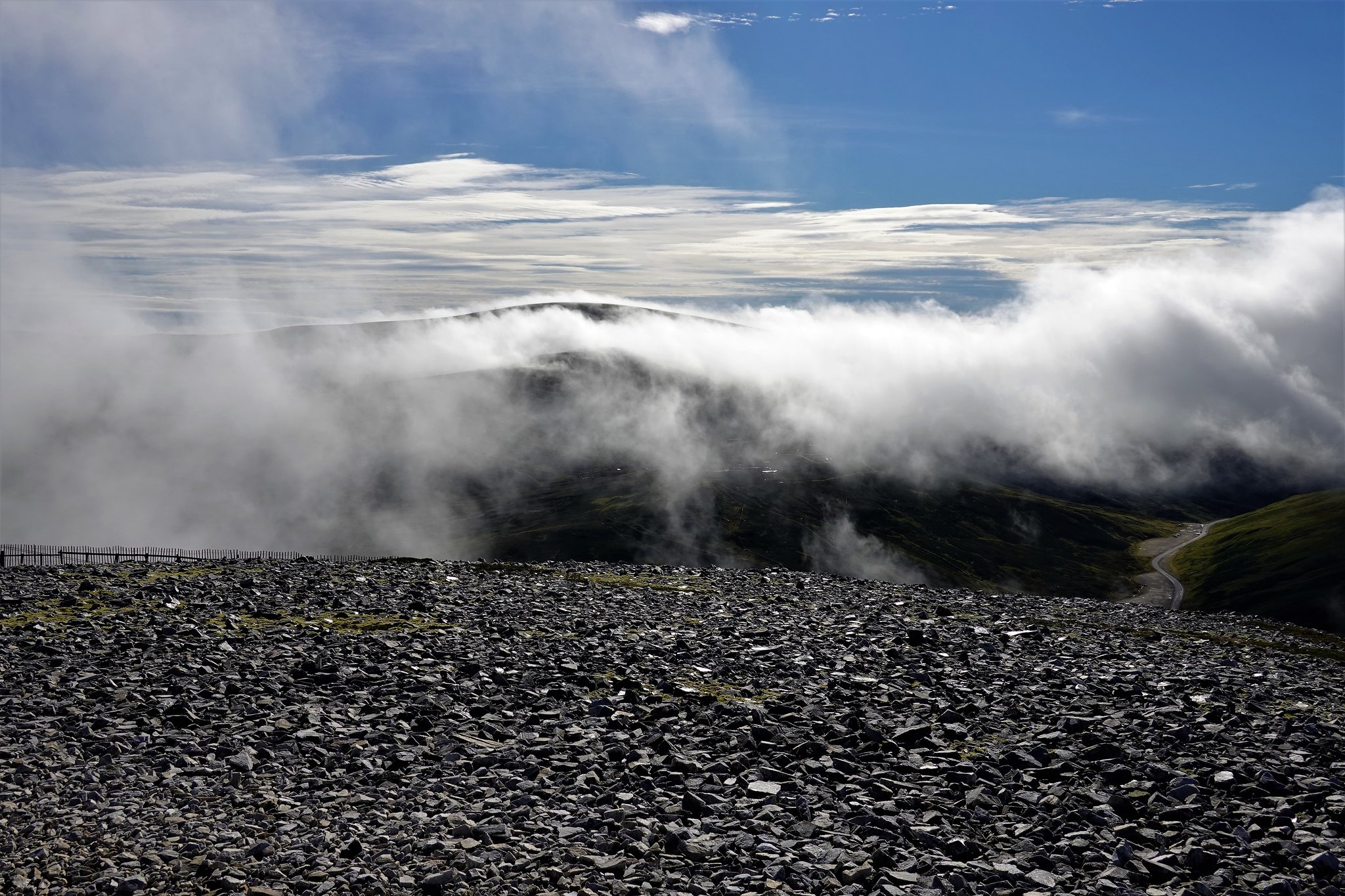 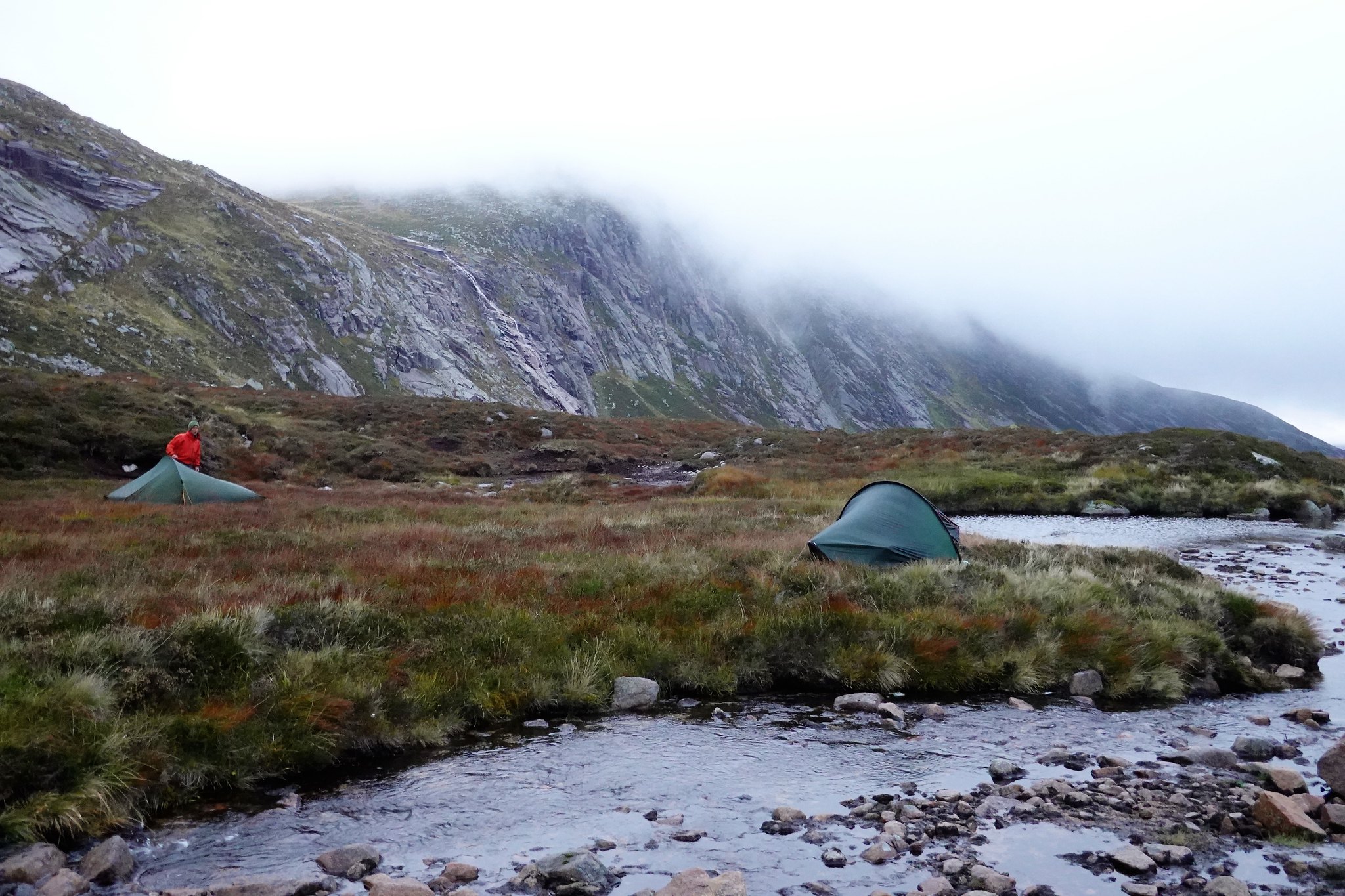 DSC01263 (2)
Sunday 26th Sept
Todays plan; if Broad Cairn and Cairn Bannoch had been already been done was to go onto Lochnagar, down to Gelder Shiel bothy and through to Breamar via Invercauld. We had a camping pod booked on the campsite so we could sorted out. The mist in the morning was down to our camping area and as we climbed up towards the contouring path around Carn an t-Sagairt Mor the wind started to gust heavily. With ourselves around 600/700 feet below the Lochnagar plateau I didn't see the point in going up there so we headed down to Loch Callater and the bothy and a slow stroll into Braemar. We got sorted and went for a few beers and on trying to get into the Fife, despite there been only 4 people in the bar we couldn't get in without a booking so we went to The Mews, the old Invercauld arms, which had Sky Sports on and were happy to serve us.
Monday 27th Sept.
The power had gone off during the night in the area due to the winds so it was a trip down to the bothy café, they had a generator, for breakfast. Fed and watered it was a road walk along to the Linn of Dee. Normally I would go over Victoria Bridge but it was closed to all traffic. The water levels were high at the Linn Of Dee, the highest I have seen. From there we made our way up Derry Lodge, calling into Bob Scotts for a rest. One person was in and in the 20 minutes we were in, I think we didn't get a chance to speak! We then went up Glen Derry. The levels of the burns were high and we had to detour several times in the lower glen before taking the path up to the Hutchinson hut. The initial plan had been for a high camp up by Loch Etchachan but the winds were strong by the bothy so we opted for a bothy stay. One person was in and 2 more joined later for a full bothy which with the fire on was toasty. 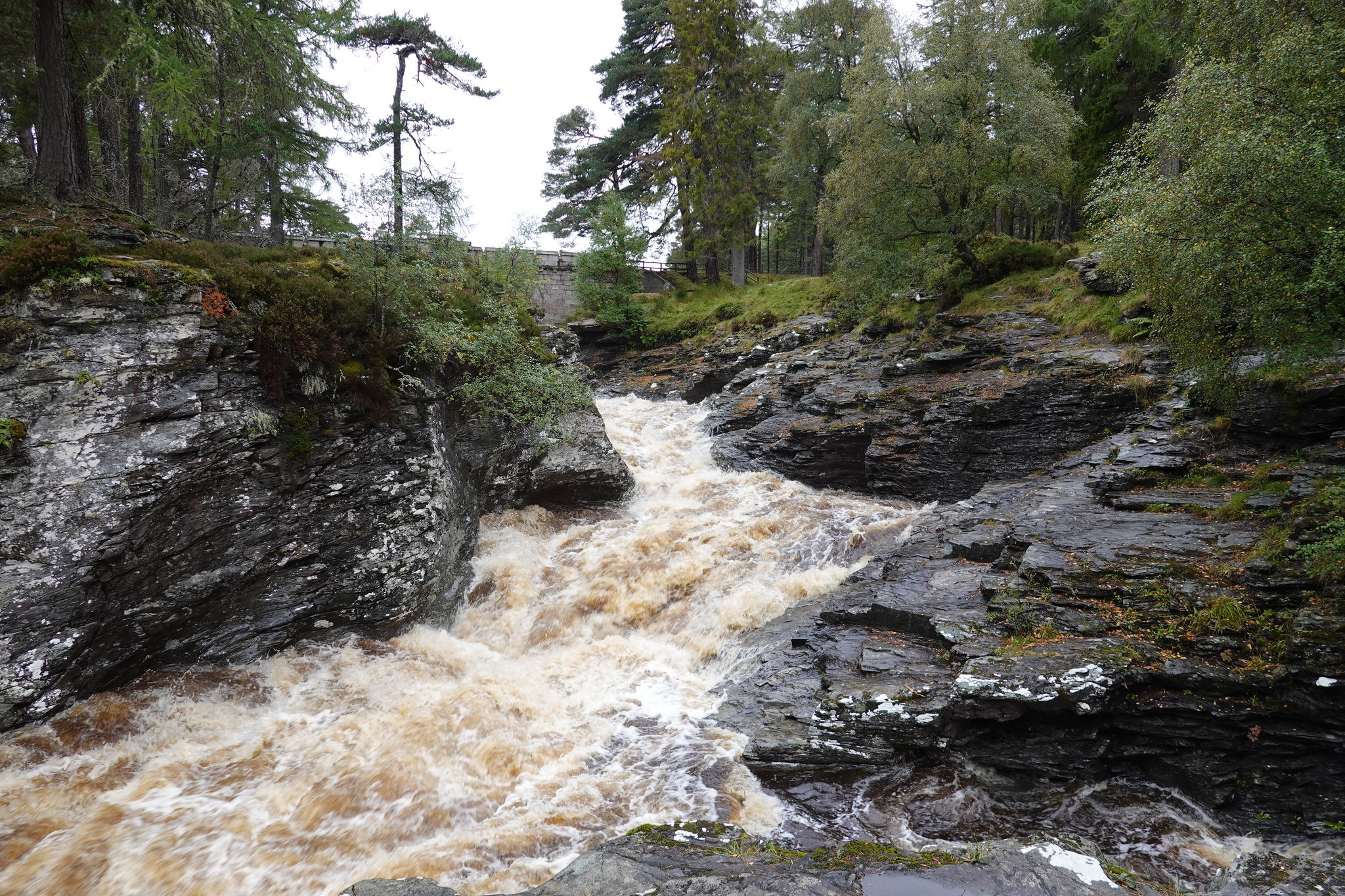 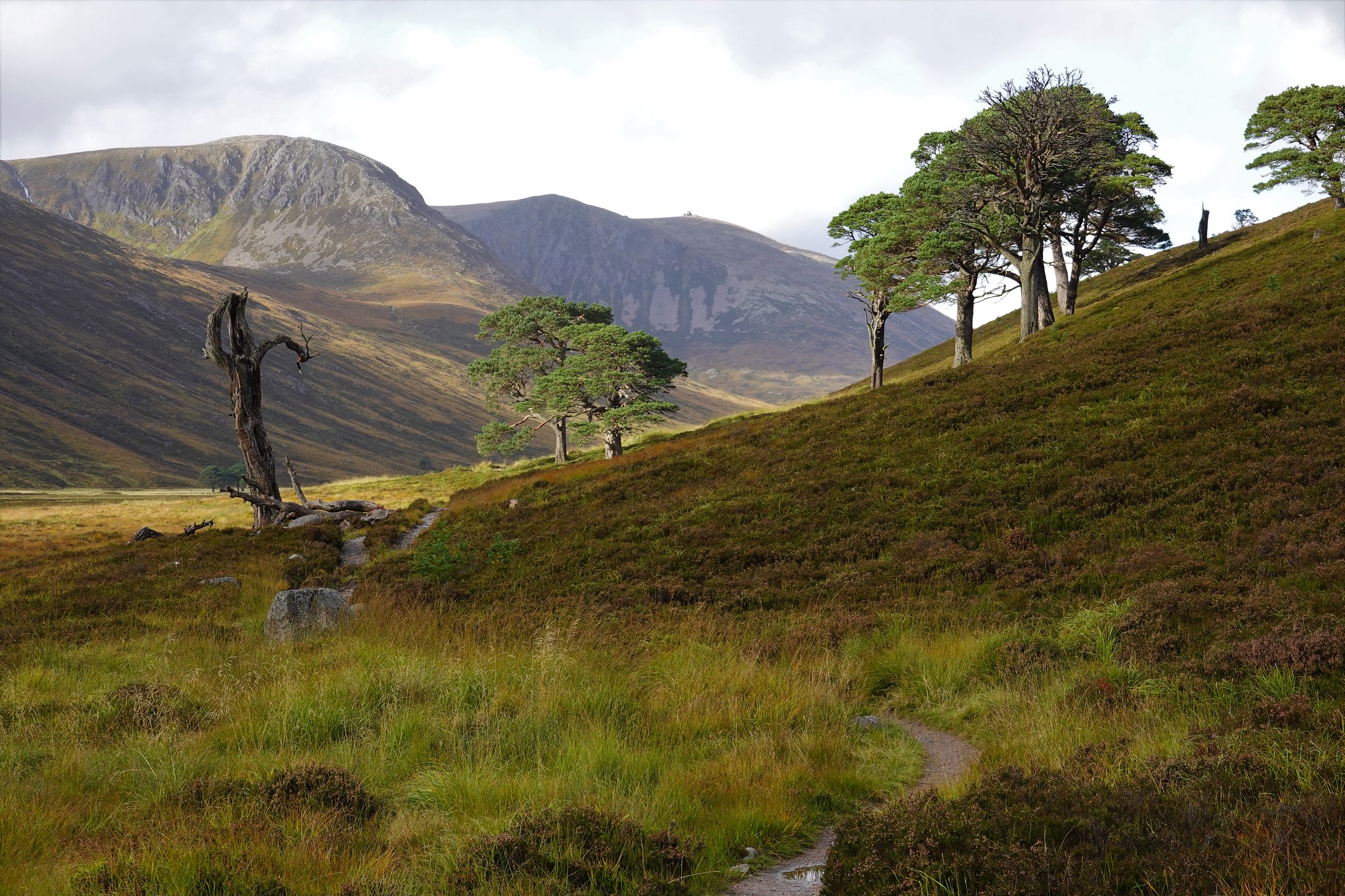 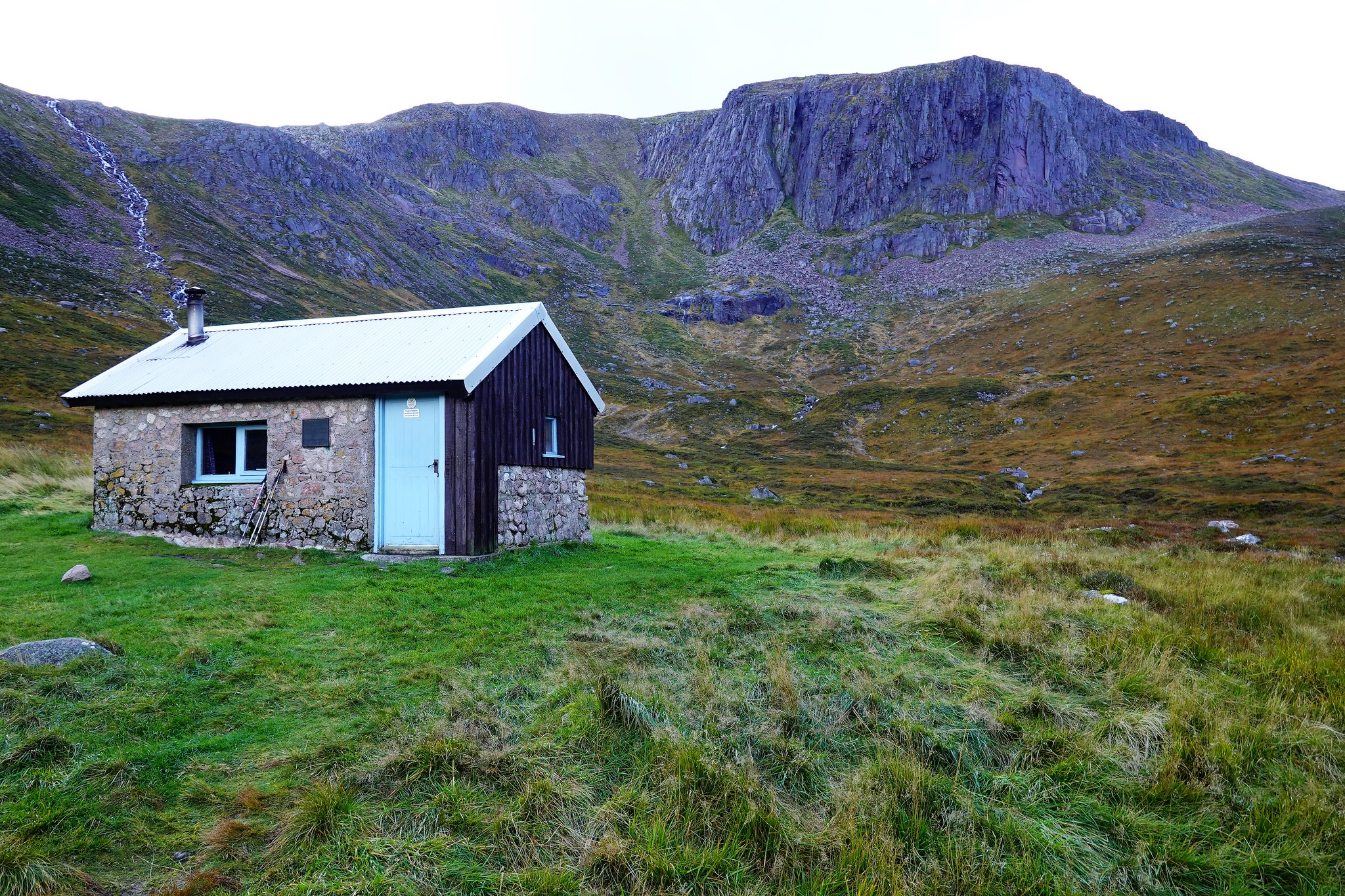 DSC01289 (2)
Tuesday 28Th Sept.
Tuesday morning and on a windy misty morning we made our way to the lochs and then, leaving the rucksacks made our way up Ben Mheadhoin and then returned before going up the Macdui path and again dumping the sacks before going onto Derry Cairngorm. The mist cleared on Derry Cairngorm but the winds were strong, the gusts at times making it difficult to stand. We then returned to the bags and found shelter for lunch before going up into the clouds onto Ben Macdui. I think that is Steve's second visit both without a view. Not hanging around we dropped down to the Tailear burn and onto Corrour bothy. There were 3 or 4 sacks in the bothy so we camped nearby. 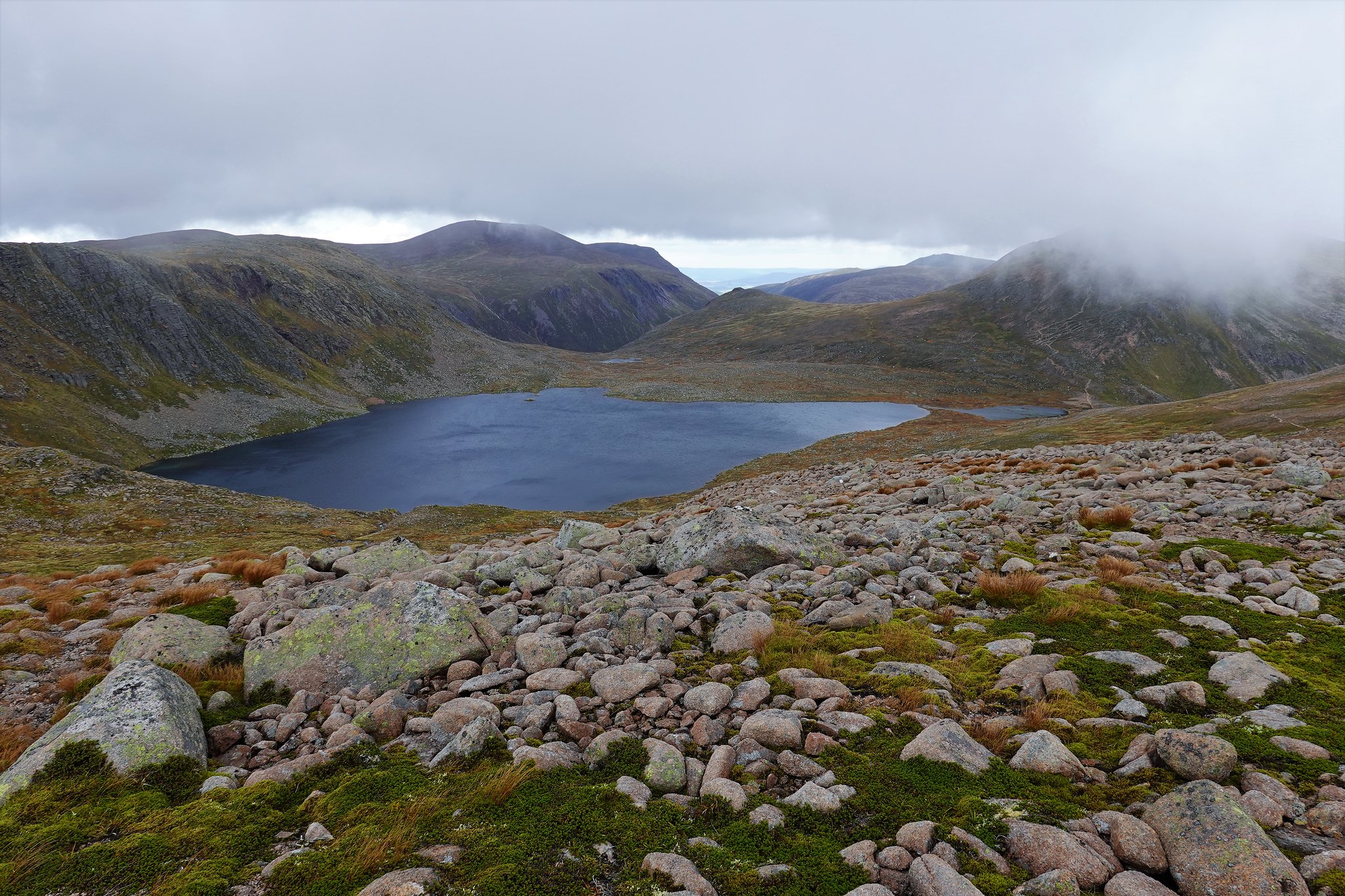 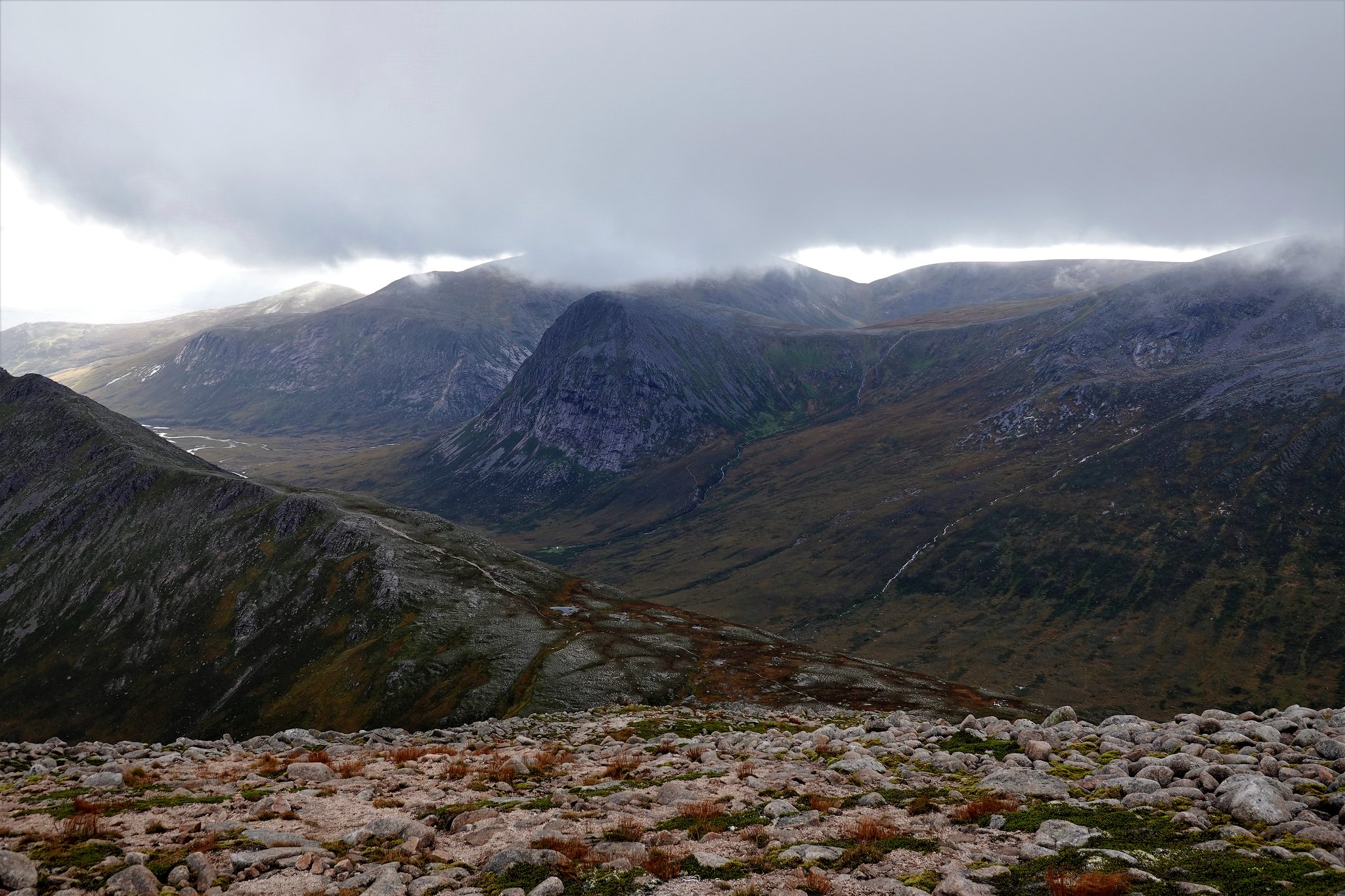 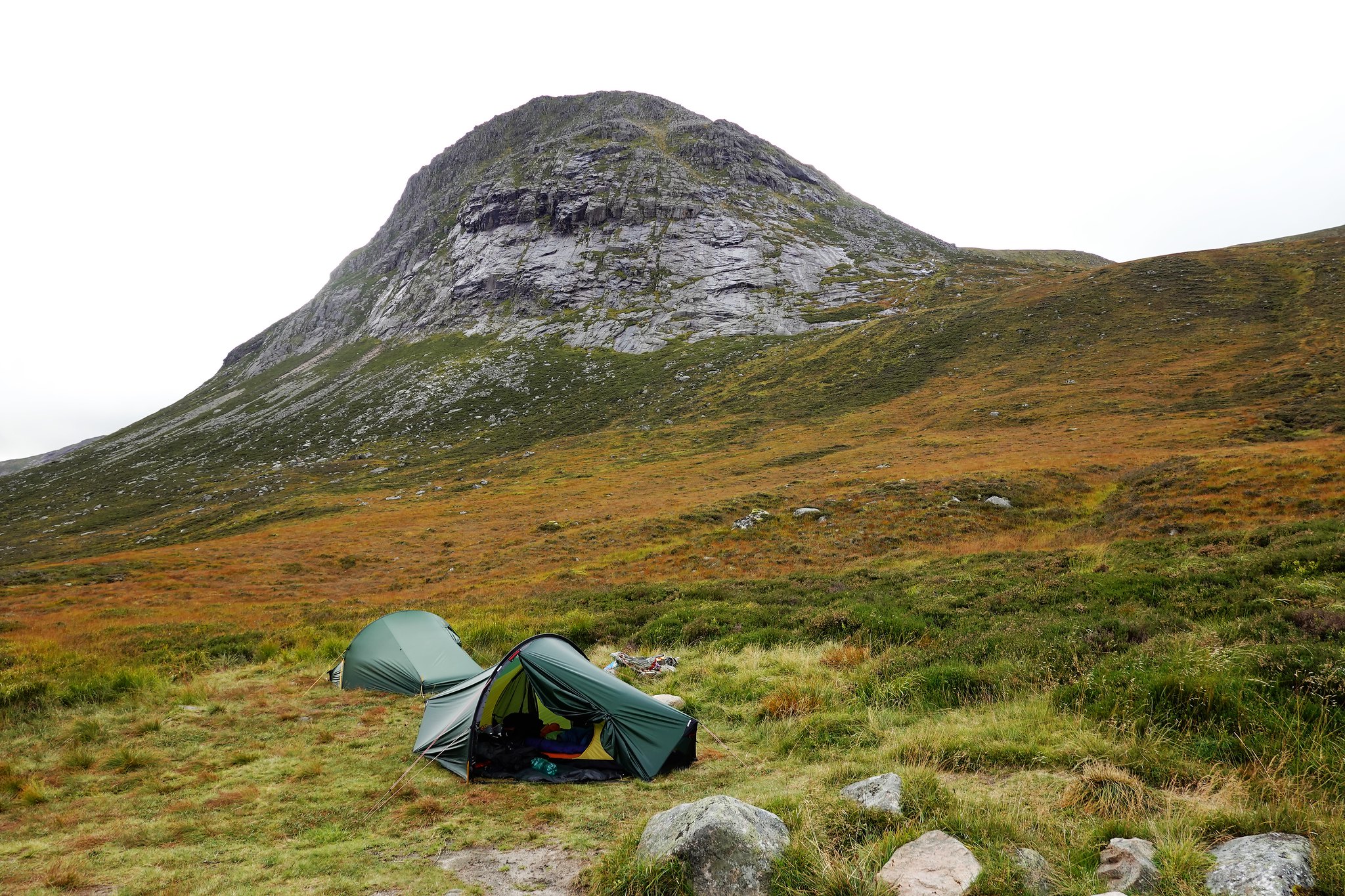 DSC01324 (2)
Wed 29Th Sept.
What turned out to be the final day. We had an early start, getting away for 8am up onto the Devils Point, before going to Cairn Toul. We took the bypass path on Cairn Toul, dumping the sacks on the far shoulder before going up onto the top. The weather was clear, cold and windy. I could see over the ground to the SW towards Feshie and began to think about the next 2 days walking which might involve some river crossings. We returned to the bags and made our way to Angels Peak and then around to the Falls of Dee and onto Braeriach before descending to site of the Sinclair hut and then a walk out to Coylumbridge and Aviemore where a room was booked at the YH 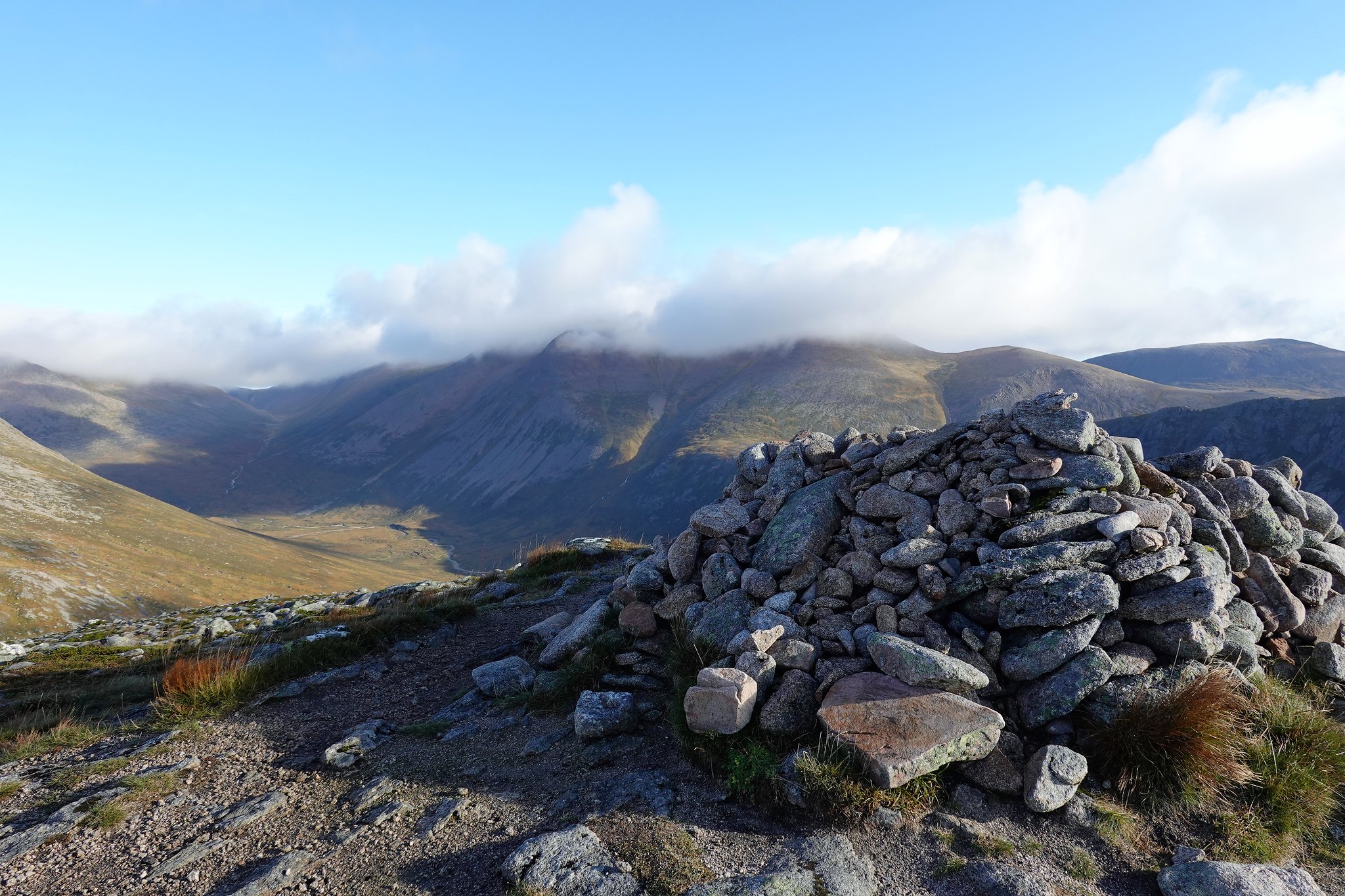 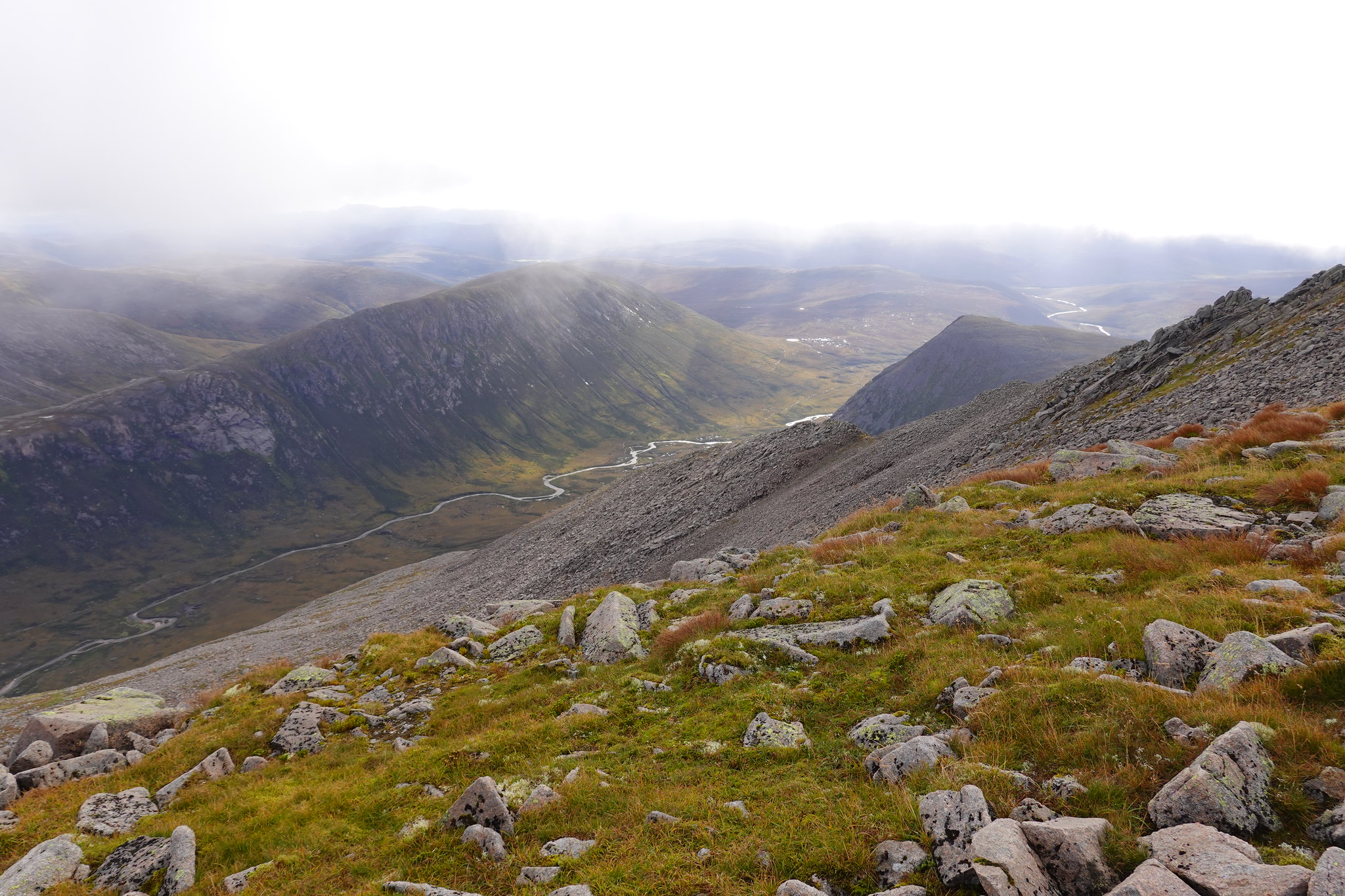 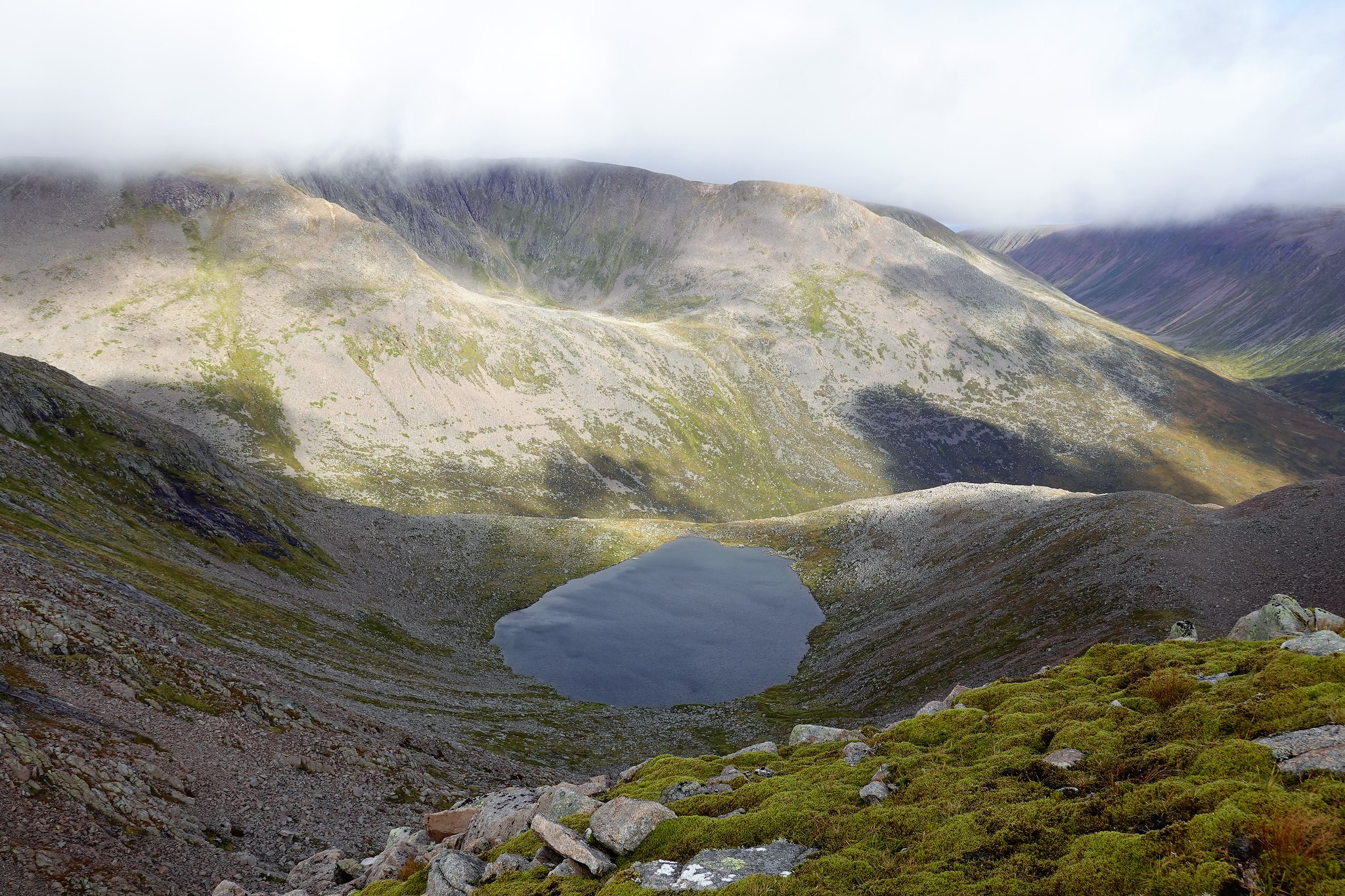 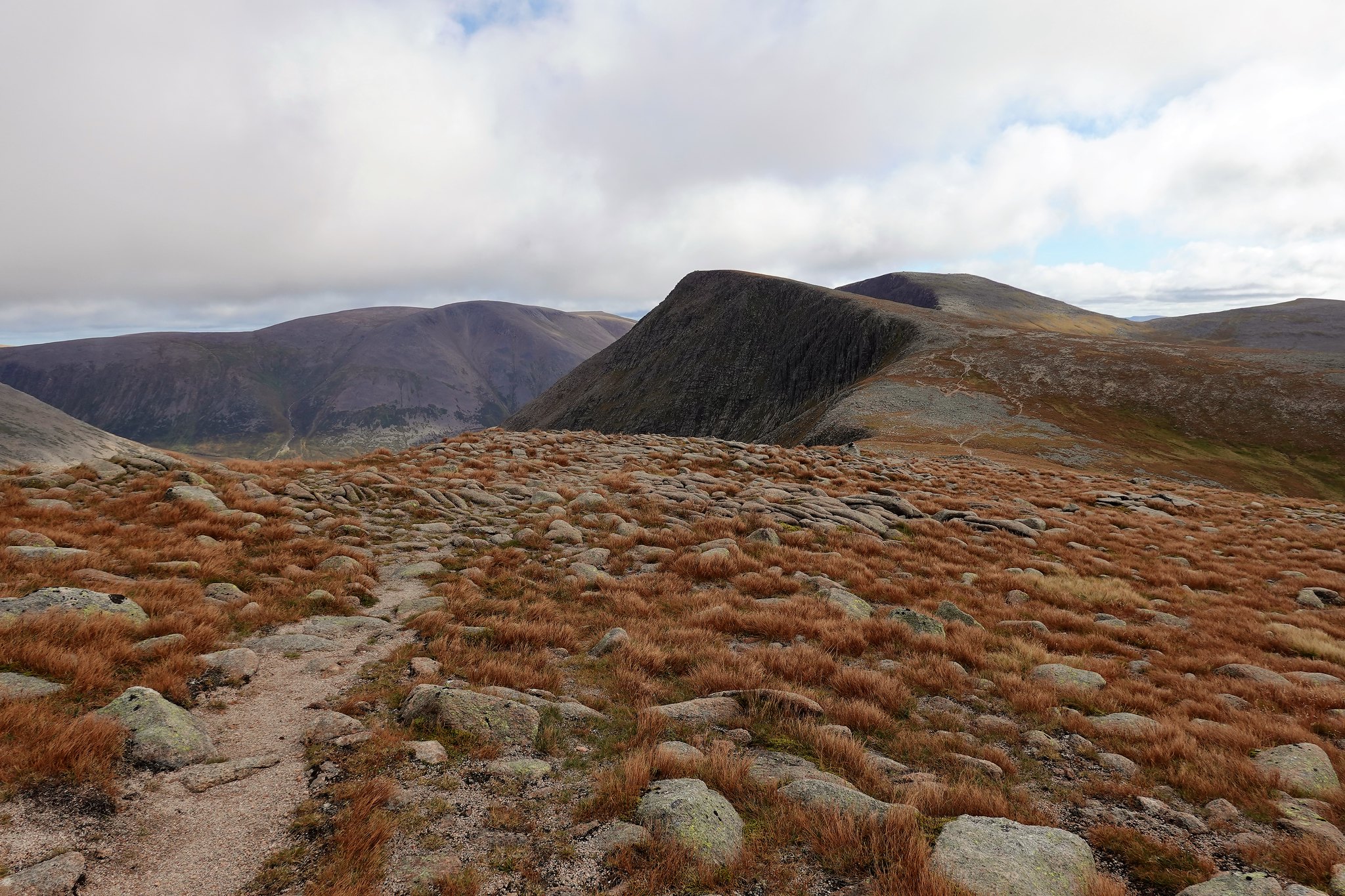 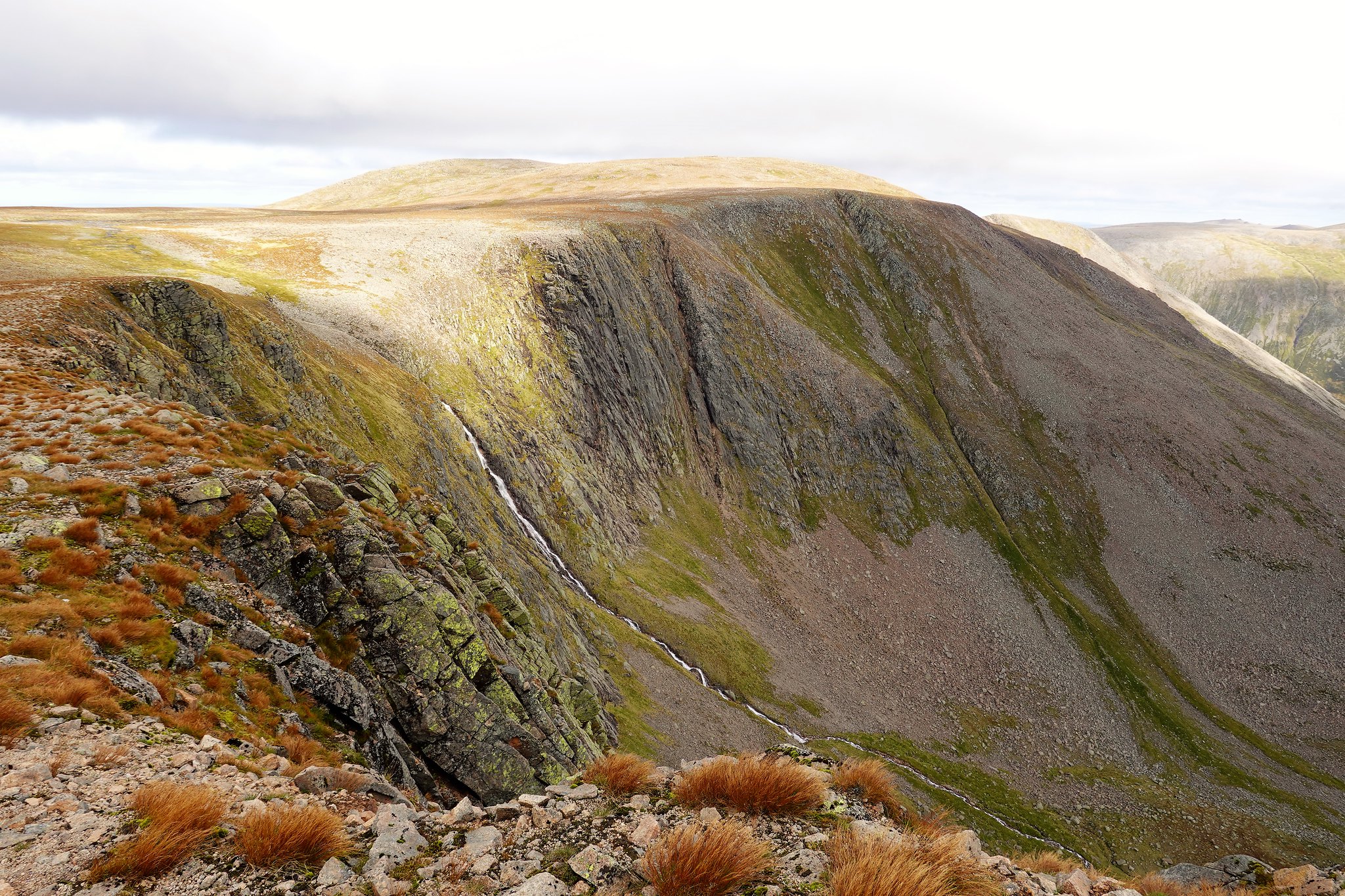 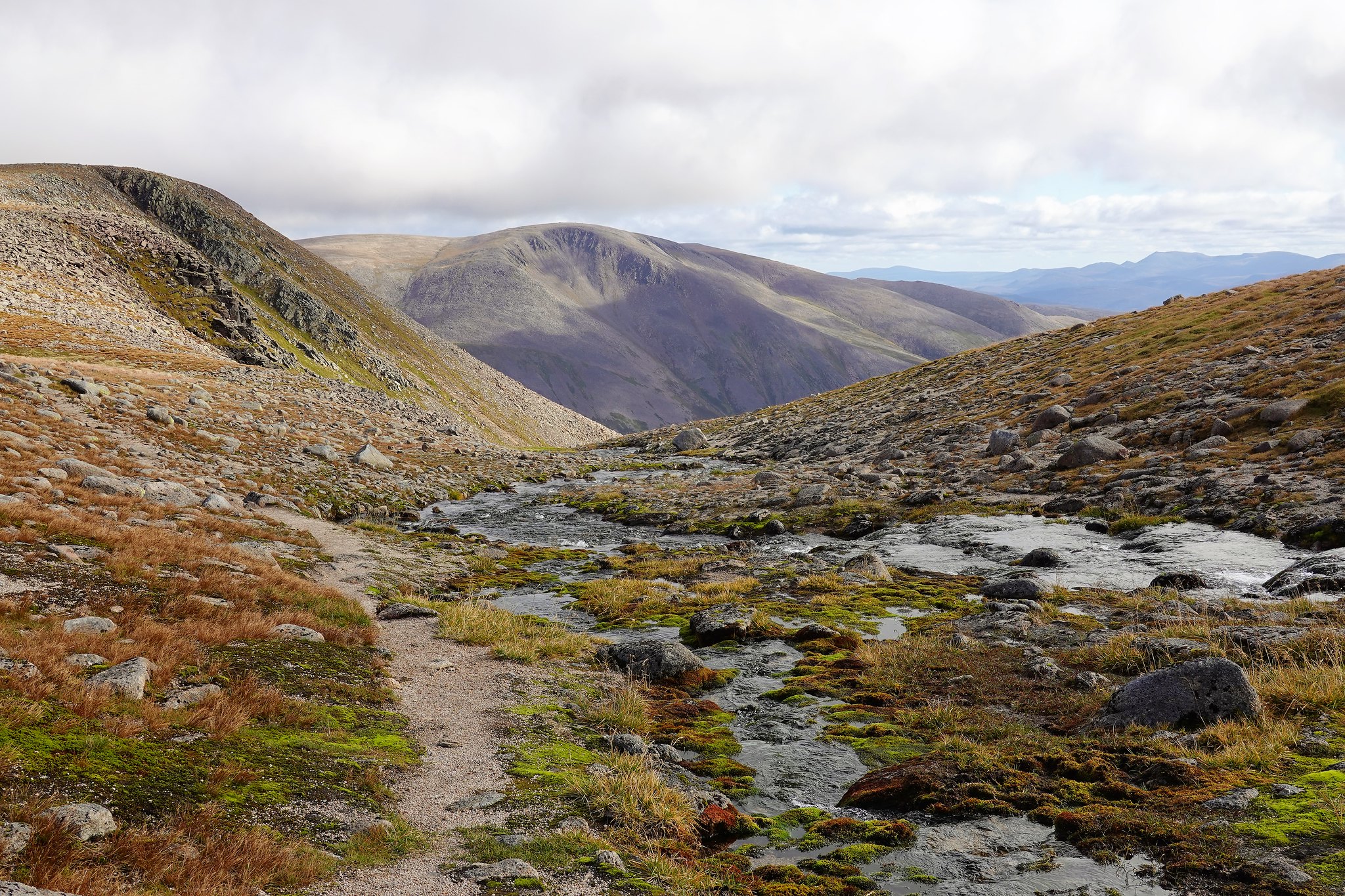 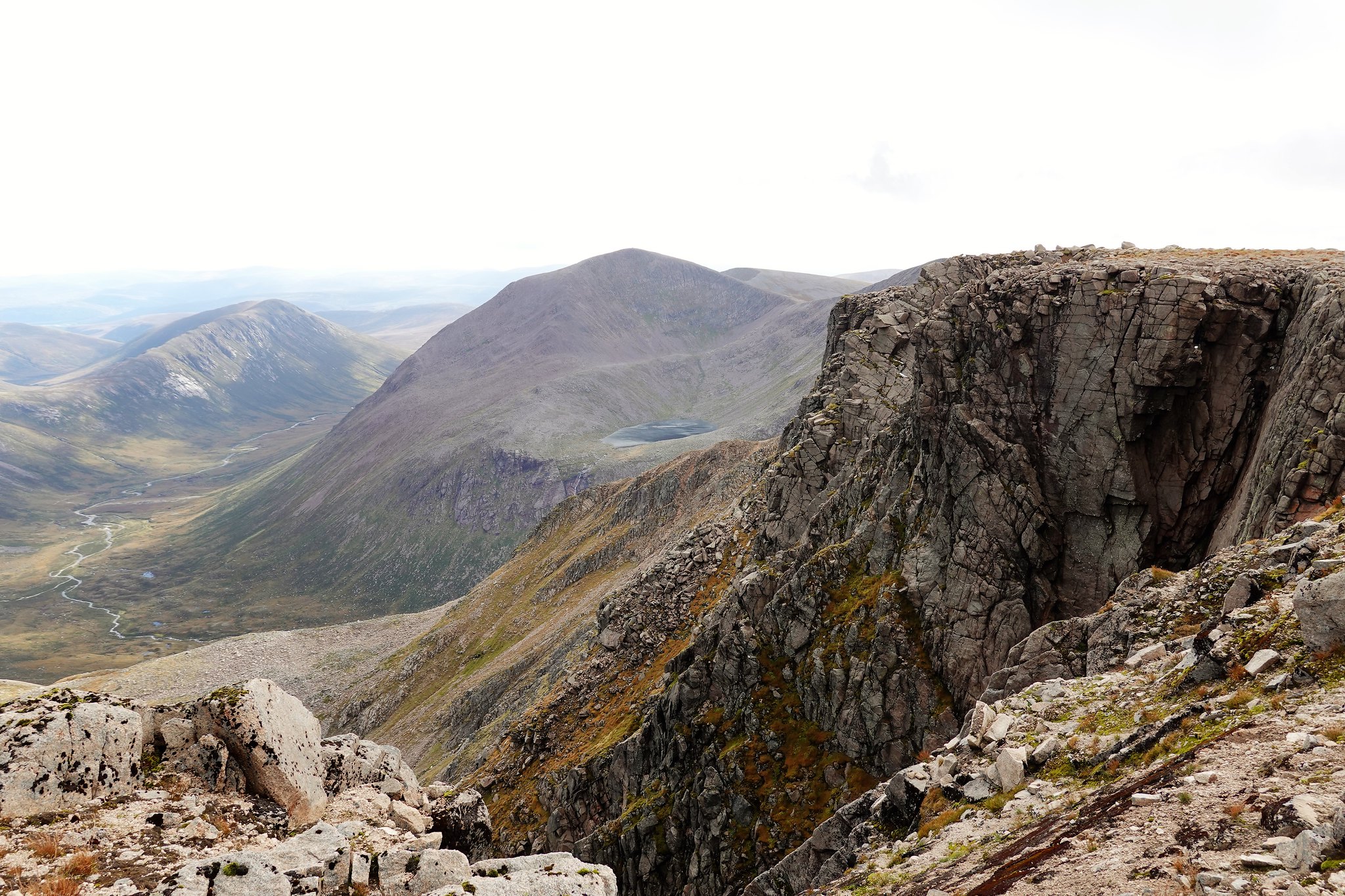 DSC01358 (2)
The initial plan had been to walk from Aviemore back to the car at Blair Atholl either by going Loch Eanaich, Monadh Mhor, Beinn Bhrotain and Glen Tilt or by Feshie, Minigaig, Glens Bruar and Banvie but in the event I felt ill during the night and made the decision to get the train back to Blair Atholl and get home. A wise decision as it turned out.

Re: A long overdue Cairngorm backpack

Good to see your occasional trip reports to here on WH. You always seem to enjoy your multi day walks in the Cairngorms Park. I had come across this report in another place. I too send notes of occasional my occasional activities to WF where I write as Vizzavona.

Re: A long overdue Cairngorm backpack

...your Glen Tilt camp spot looks very familiar ! Very like the view we had from one we used to use when my husband was involved with D of E groups. It was a fair old walk up the glen, I remember that.
We camped at Loch nan Eun one trip before doing two of the more remote Munros there.I was amazed to see an Osprey -twice - hunting above the loch though gulls chased it (quite amazed to see gulls too, so far inland but they seem to be everywhere these days.) Lovely spot.