The first edition of Chasing The One... as in, THE one bus/train I had to catch or I wouldn't make it back home. Made more difficult by the fact I didn't have access to Naismith back then, so I just combined two official routes, guessed how long the part I was interested in would take, and guessed more how much faster than the suggested time I could be. 8h04 is what I had at my disposal. Let's go! First along the tarmac, but joined by the lovely scenery and weather of Upper Deeside. 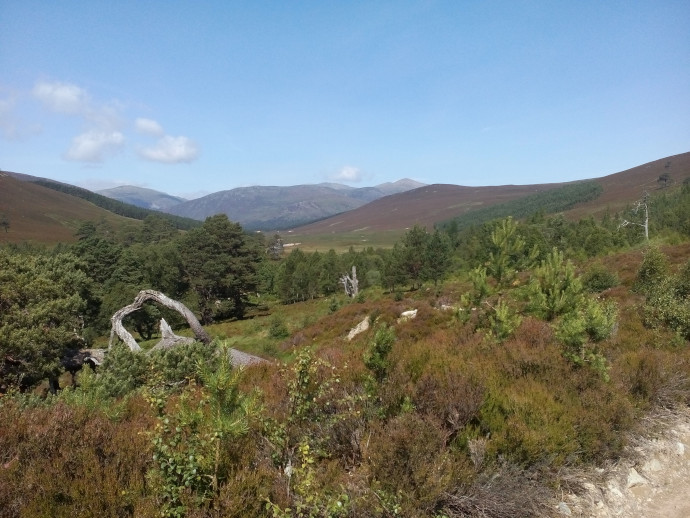 Crossing the Dee, I joined a track. After a short trek through the woodland, the views of the hills I was heading for were starting to open up in front of me. Derry Lodge was set in some absolutely lovely surroundings, just the place to take your family to on a nice day like this. And I was quickly falling in love with Gleann Laoigh Bheag as well. But there in front of me? Yeah, on the left, that was the slope of Sron Riach I was heading for.

After Sron Riach, I thought I was following a path, but it took me too far left, so I just went straight uphill, joined the major path, and ascended Ben Macdui. Quite windy and plateau-y, so a panorama is needed to get the grasp of what I saw... but man did I see a lot! The ones protruding the most in front are the other over-4000s of the Cairngorms (Braeriach et al), but the views were massive in each direction. A short trip down a totally weathered, stony grey area later, I made it to Lochan Buidhe, from where I was turning right to head for the second Munro of this trip: Cairn Gorm. 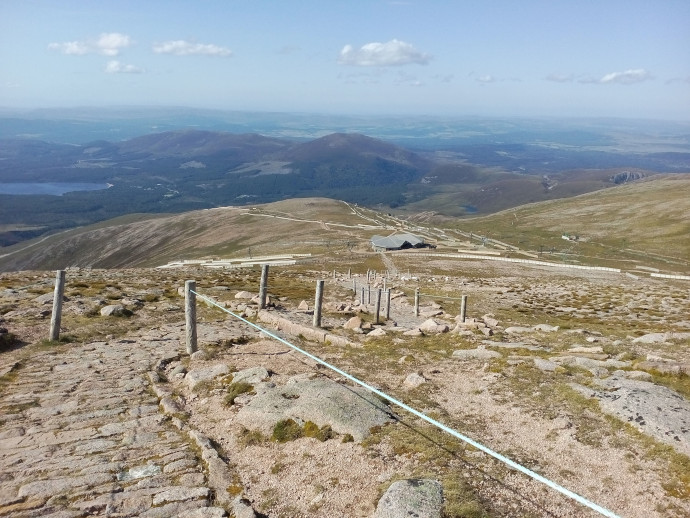 Made it to Cairn Gorm. Now I only had a little over an hour left until my bus would depart, so I was starting to get a bit nervous, but there was no need. Straight down the piste and on good paths, I reached the ski resort car park in some 45 minutes and could kick back and relax in the bus - or rather in the train an hour or so later.