This was the most absurd summit up to now that we have climbed up.

Two thirds of our walk were along Lairgs of Tain - Strathrory Link Track. The track links old drove roads "The Lairgs of Tain" and "Strathrory".
The rest was a rough walk through watery grass, tussocks, heather, young forest cover. There are some animal paths, but these were mostly full of water so were not very useful.
Not far from the "summit" is Navigation Pole where the Geocache "Trigopoly - Scotsburn Navigation Pole" is hidden.


20211008-Cnoc-an-t-Sabhail---West-from-Struie-road-Track.gpx Open full screen  NB: Walkhighlands is not responsible for the accuracy of gpx files in users posts

We started our walk from the car park at B9176 (Struie road). There is the start of "Lairgs of Tain - Strathrory Link Track".

The link track right behind the gate near the car park: 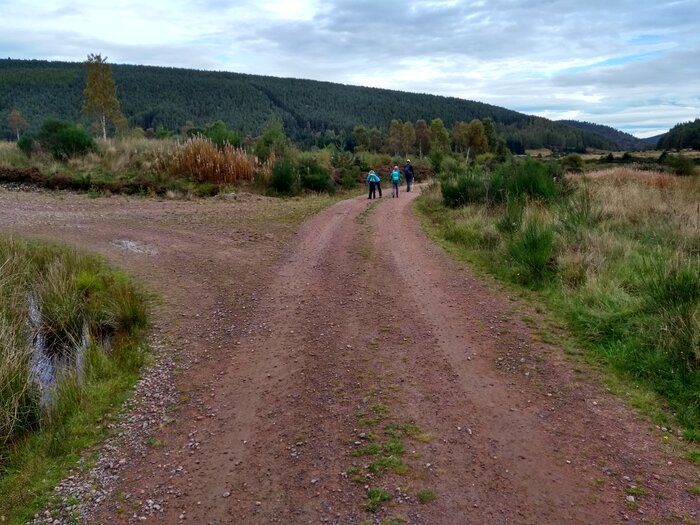 We walked over the bridge: On this turn to the right. (on the left there is a track to Loch Sheilah): ...and headed up to the NNE through the fire break: An animal path led trough the fire break but it was very watery, like a sponge, so we walked mostly alongside the path: At the end of the fire break there is a fence where we took to the right alongside the fence. There was a path but as "good" as in the fire break After 300 m we came to another fire break on the right side which is leading to the summit, to the South. The ground - spongey, tussocks, etc. I located the summit only with help of the GPS. It is not marked. There is nothing, absolutely nothing

. No cairn, no trigpoint, no view. Nothing. When I said "We are here" everybody started to laugh

. This is the most absurd summit that we have visited until now.

Conni on the summit (sitting on the baby Christmas tree From the summit we headed further to the South to Navigation Pole: From Navigation Pole, trying to follow an animal path across the fire break, we headed further to the SSW.
The fire break is a bit overgrown in some places, but still passable: After about 500 m we reached the link track and turned right to the NW, back to the car: On the way down we took a shortcut through the fire break which did not look very walkable from the bottom as it was densely populated with trees: The fire break was easily walkable, just a bit steep on the end. There was an animal path on the edge of the forest: The fire break ended in the "trees jam"

but we managed to find a way out. In the end, we walked more on the right between trees: How to find the Geocache

(letter above equals below, and vice versa)