Another short day with a good forecast presented itself and after carefully checking over the forecast Mrs R and I decided to set off to Glenshee and tackle Glas Tulaichean. I'd seen it from the north east on An Socach the week before and it looked inviting covered in snow. We parked at the Dalmunzie House Hotel and paid our £2 parking fee - definitely worth saving a 4 km road walk! And we set off up through Glenlochsie Farm and then up the valley following the dismantled railway. Stangely it starts off in the valley bottom just beside the road then seems to appear 10 metres higher up on the hillside to the right. 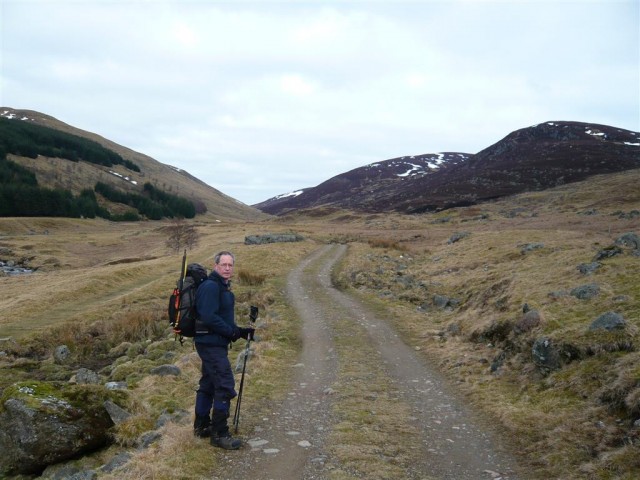 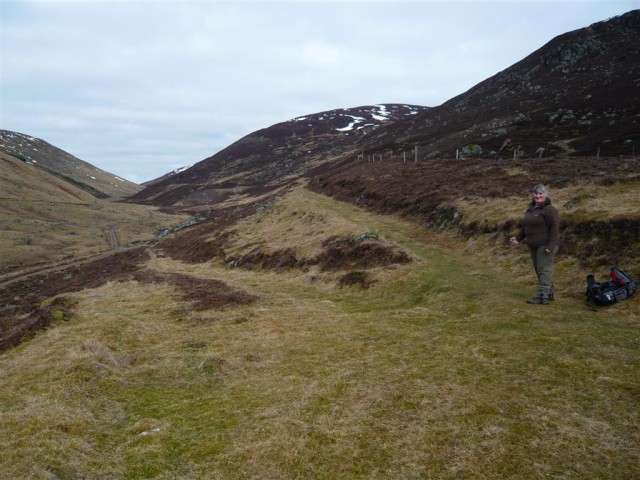 The railway at it's new level

Anyway we found the old track to be good walking and soon we came in sight of the old Glenlochsie Lodge. 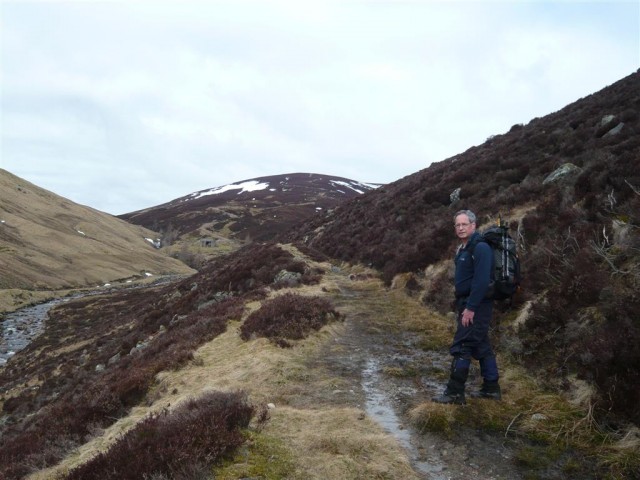 It has clearly seen better days. But it is now well avoided - one day the roof will come down probably when the snow is on it! Our way forward headed up the track onto the south ridge behind the lodge. 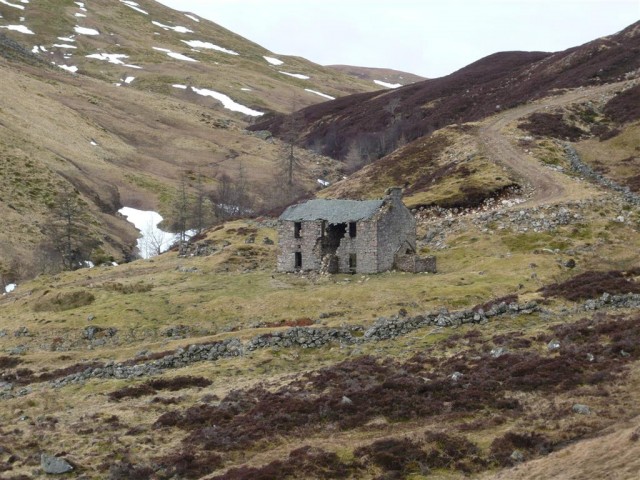 Glenlochsie Lodge with the track ahead

So it was all up hill from then on. I must admit that landrover tracks are not may favourite routes up hills. They do get you up there quickly - even when walking. But they always seem to make it seem a bit of a slog. Or is it just me? We even tried walking on the path beside the track but it still felt like walking beside a road! 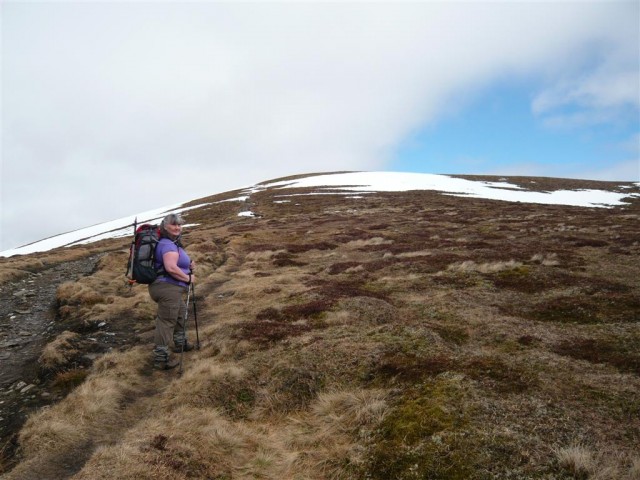 But in time we reached the top and were greeted by a friendly guy from Falkirk who had passed us on the way up. He kindly took our picture at the summit - which is much a much more civilsied way to get a group picture than setting the camera up on a rock! 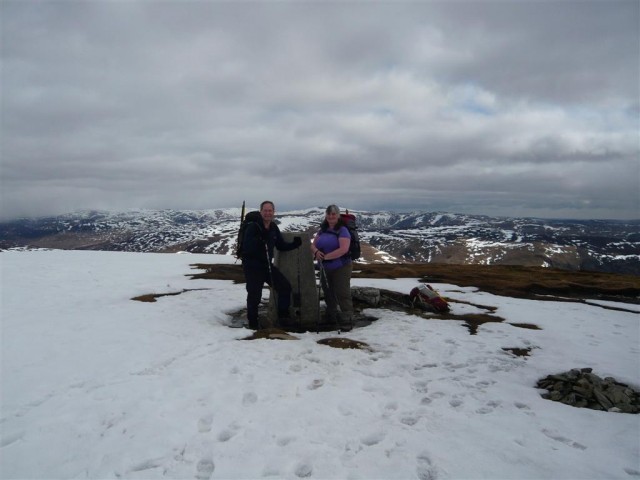 Despite threatening snow showers - which were not forecast - we got some great views from the summit and on the way down. 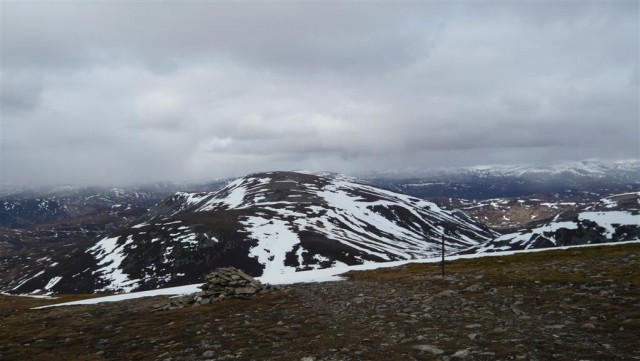 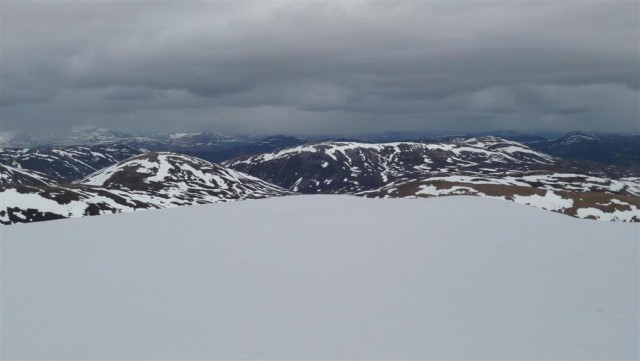 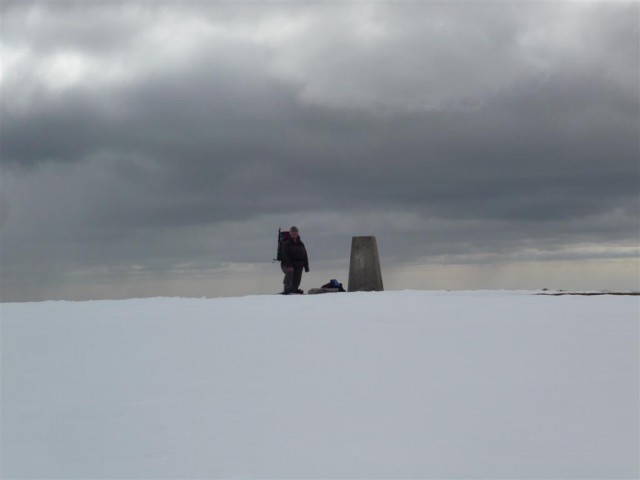 We decided to descend the SSE ridge which seemed to have a reasonable gradient and there was even some sort of vehicle track! There was still plenty of snow on the corrie rim. 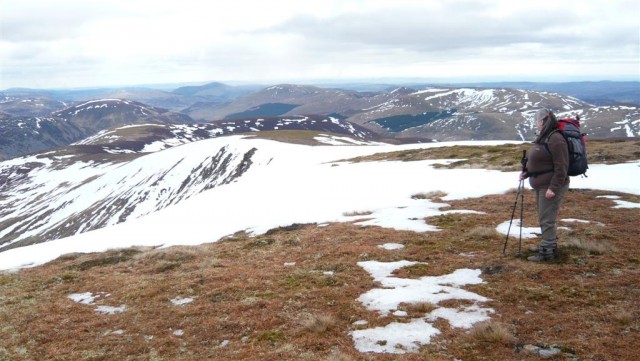 Heading for the South-Southeast ridge 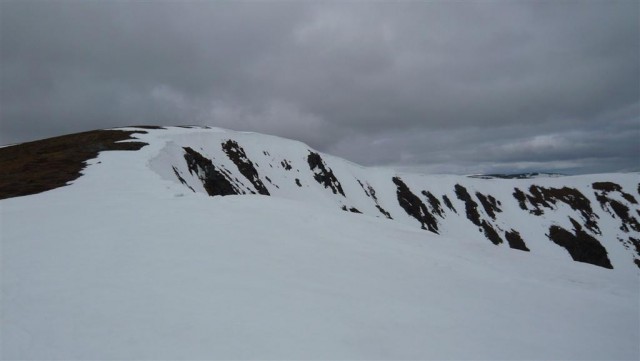 Snow on the Corrie rim

There were good views of the Ben Lawers range and Beinn A'Ghlo on the way down. 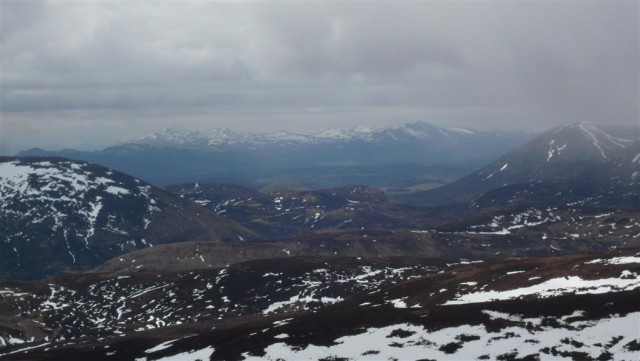 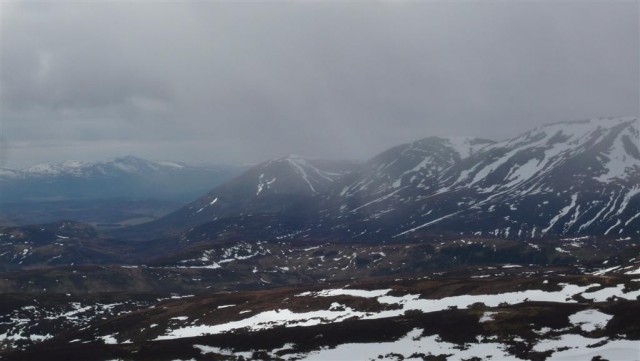 Even the hills of Fife could be seen in the distance 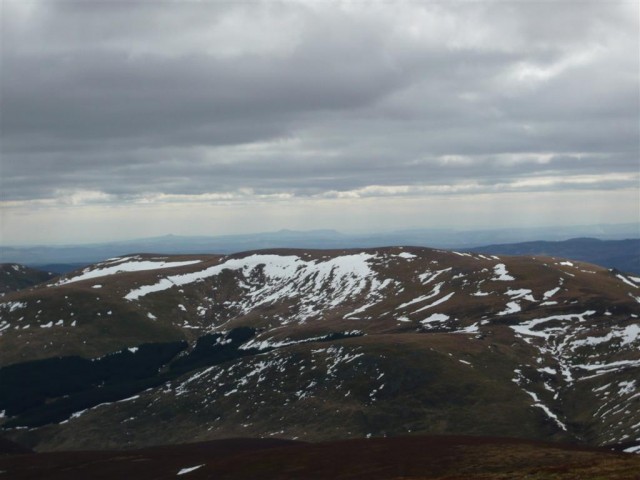 The descent down the SSE ridge proved a good route - but it did get a bit steeper and rather overgrown as we descended towards the lodge. But I might climb the hill this way next time - and avoid the track. 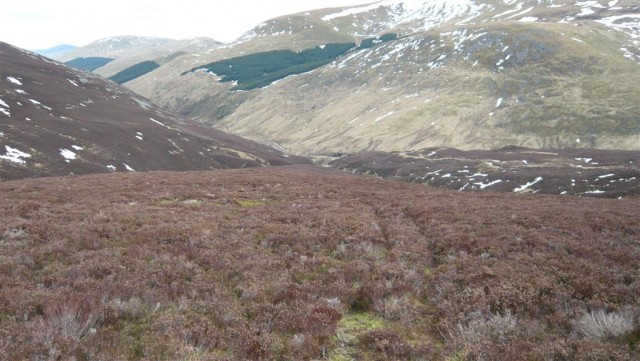 Down the SSE ridge

We even found a bridge - not as rickety as it looks

- which took us back to the track. 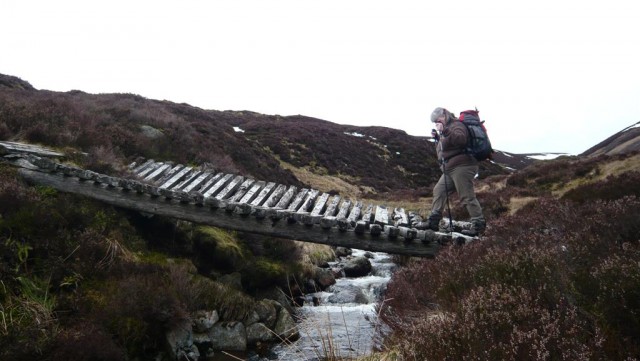 Soon it was back down the glen to the buffers - and then home! 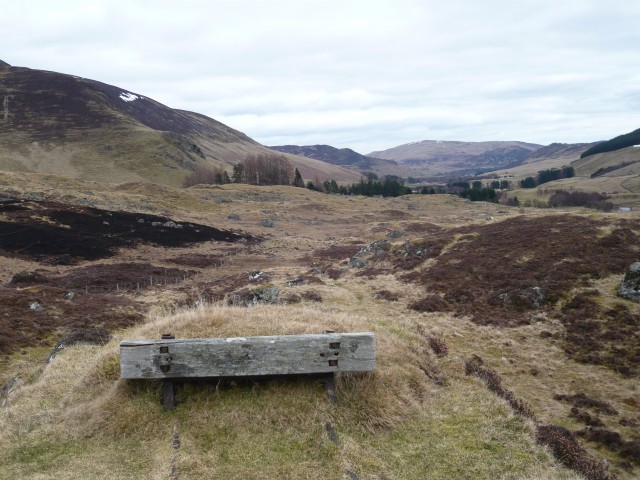 Looks like you had a great day and it's good to see the summit. It was really white and misty when we were there and I didn't realise the Coire edge was so close! Now I know why Bod put Ritchie on his lead and told me not to go beyond the trig point. We also considered coming down the same way you did but the weather really closed in on us and we decided to retrace our steps back to the lodge.

Great report and some cracking pics, that bridge sure does look rickety but I'll take your word for it

That looked a fine walk and the pictures did you proud.

Jockstar wrote:That looked a fine walk and the pictures did you proud.

Hi Jockstar! I have just realised that the date on my walk reset when I went in to edit the details. Sorry about that - I will put it right later. It was on 29 March when we ventured up there! So there's probably a lot less snow now! But you never know!

It's amazing how you can see the Lomond Hills from so many of the Munros. It could almost make you homesick.

But that Corrie rim was close Beannierocks! A few long steps onto the cornice and it would be easy to go wheee!

So you were wise to keep well away and keep Ritchie on the lead!

Just to clear up that Richie is Bod's dog and not mine - though he can come home with me anytime !!

That was me trying to reply to two people at once, Jockstar. Ritchie is, of course, Bod and Bennierocks' dog and I think they plan to keep him.

Last I heard Ritchie had bagged over 30 Munros! Very impressive!

Having a giggle at you guys! And the railway line that you have discussed (like the buffer Redrock!), it was used purely for the estate to take guests up to the Lodge to return later with persons and carcases. Presumably an odd bottle of whisky made it up those there rails of pre 1956ish. We found all this out whilst frequenting the bar at Dalmunzie for 1/2 hour before retreating to The Spittal for a bar meal. A fine way to finish off a fine Glenshee mountain day. Cool pics, particularly the bridge and the buffer as it always good to supplement the the mountain expanses with the features and fun details.