MWIS promise me reasonable weather with the odd chance of a shower today, that's good enough for me so it's boots and bag packed and off toward Glen Esk for a walk to Mount Battock.

Following WH advice I park at Millden close to the payphone sited there, but instead of following the 'burn of turret' as advised I crossed the road bridge and commenced my walk by going through the open gate adjacent to the road 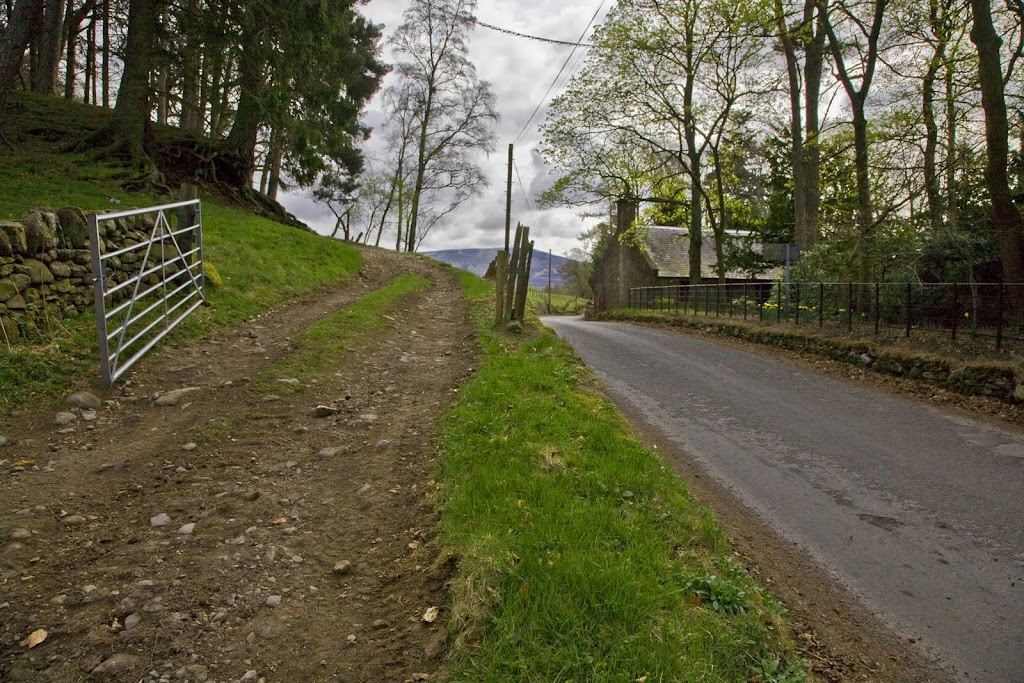 There is a good track and it turns quickly away from the road.

In a very short time there is a chink of blue sky threatening to break through. 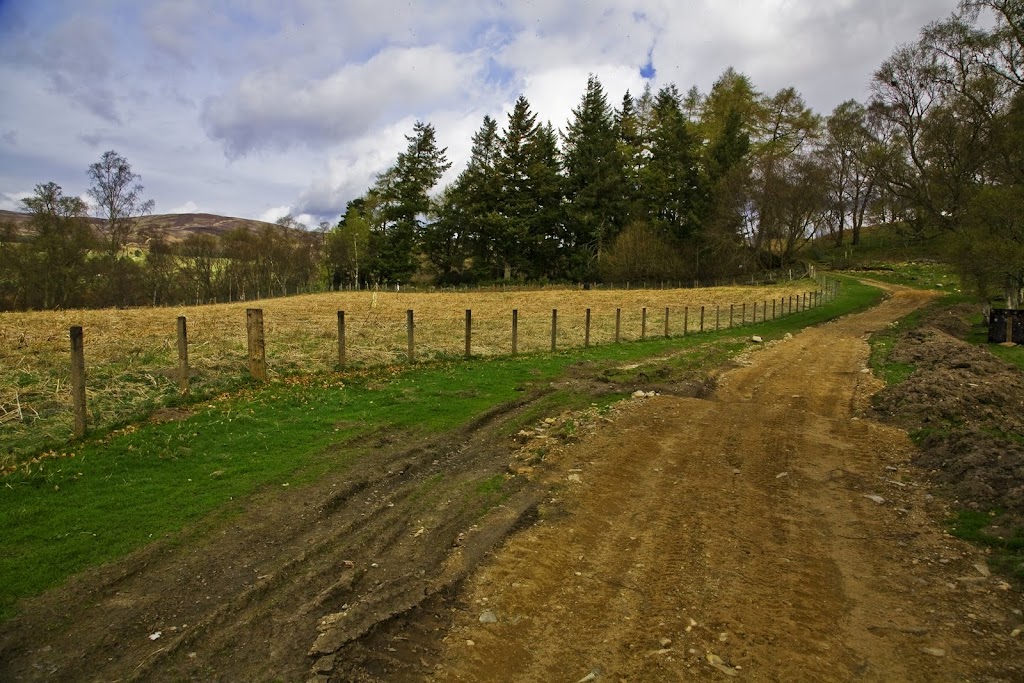 The track climbs at a comfortable pace out toward Mount Battock

looking back toward Millden across Glen Esk 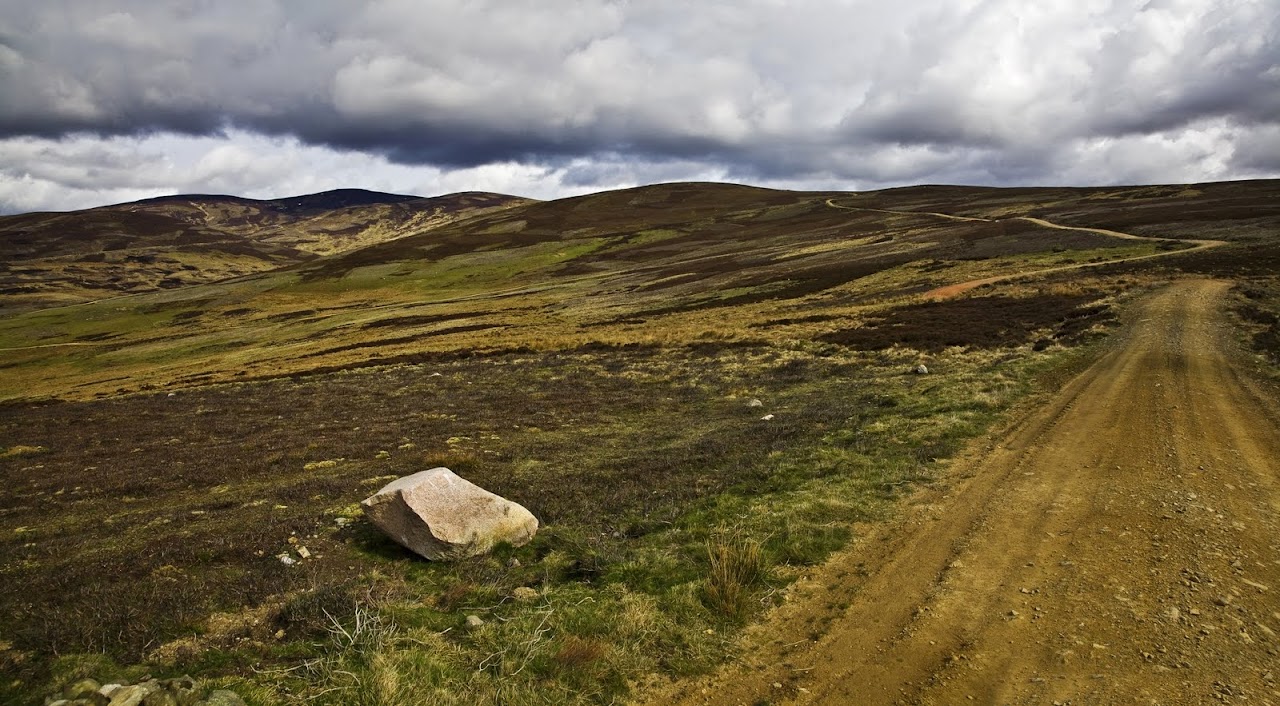 Passing through a steel gate 1km on and turning to look across the valley shows I am walking along the edge of the cloud line....hopefully it will stay to the east 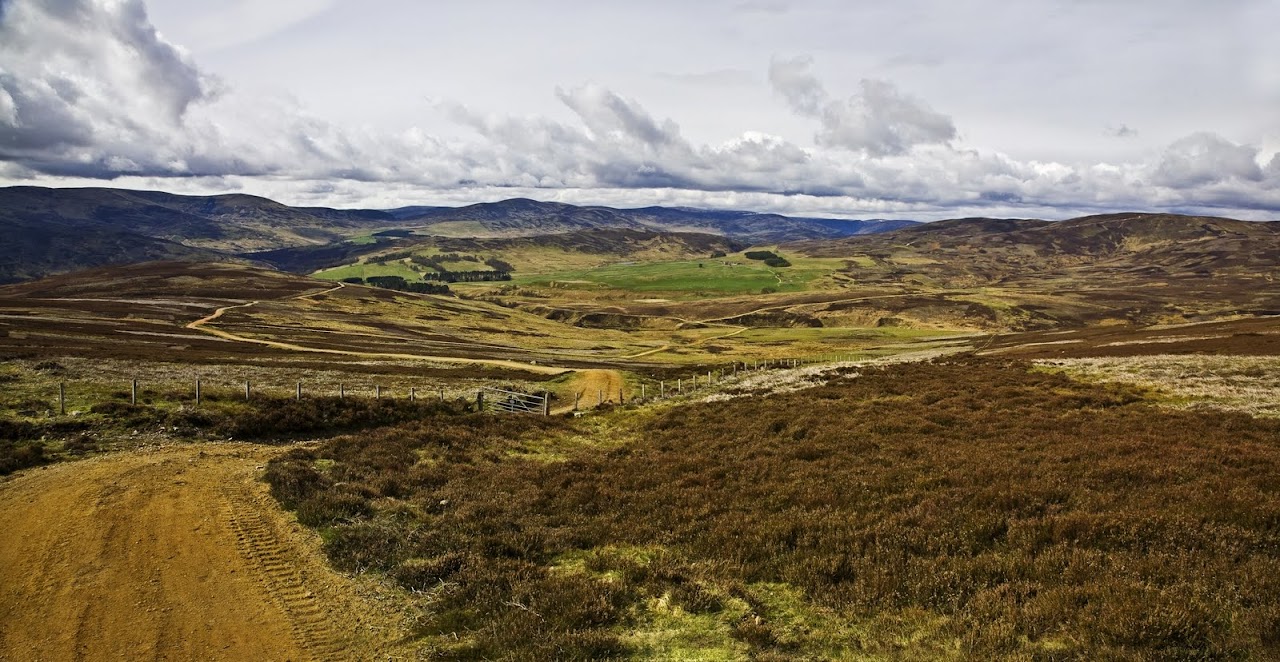 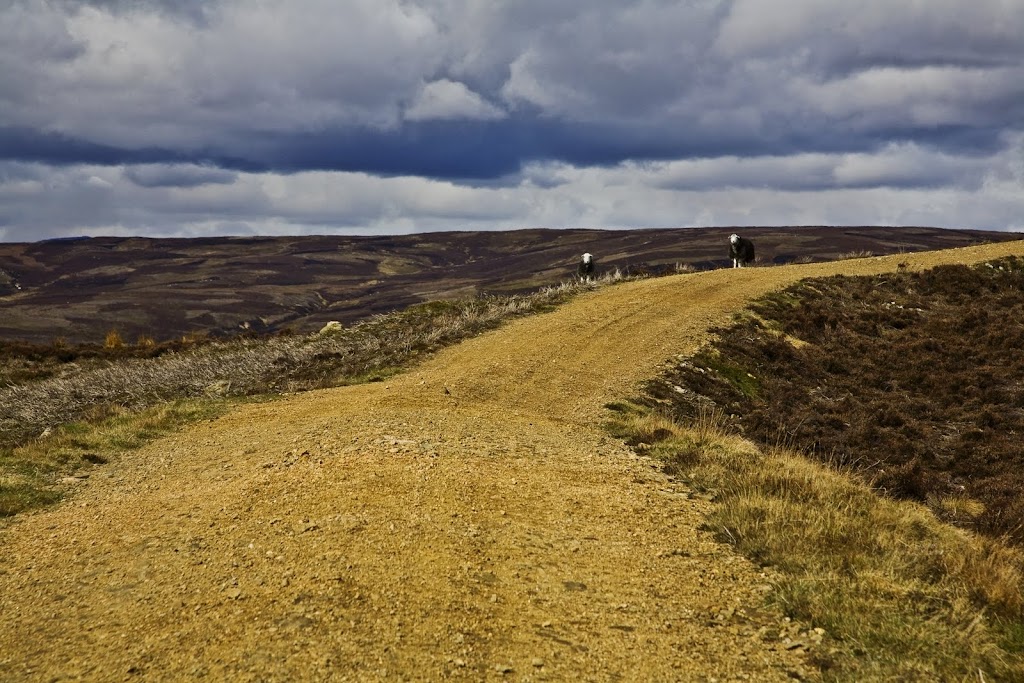 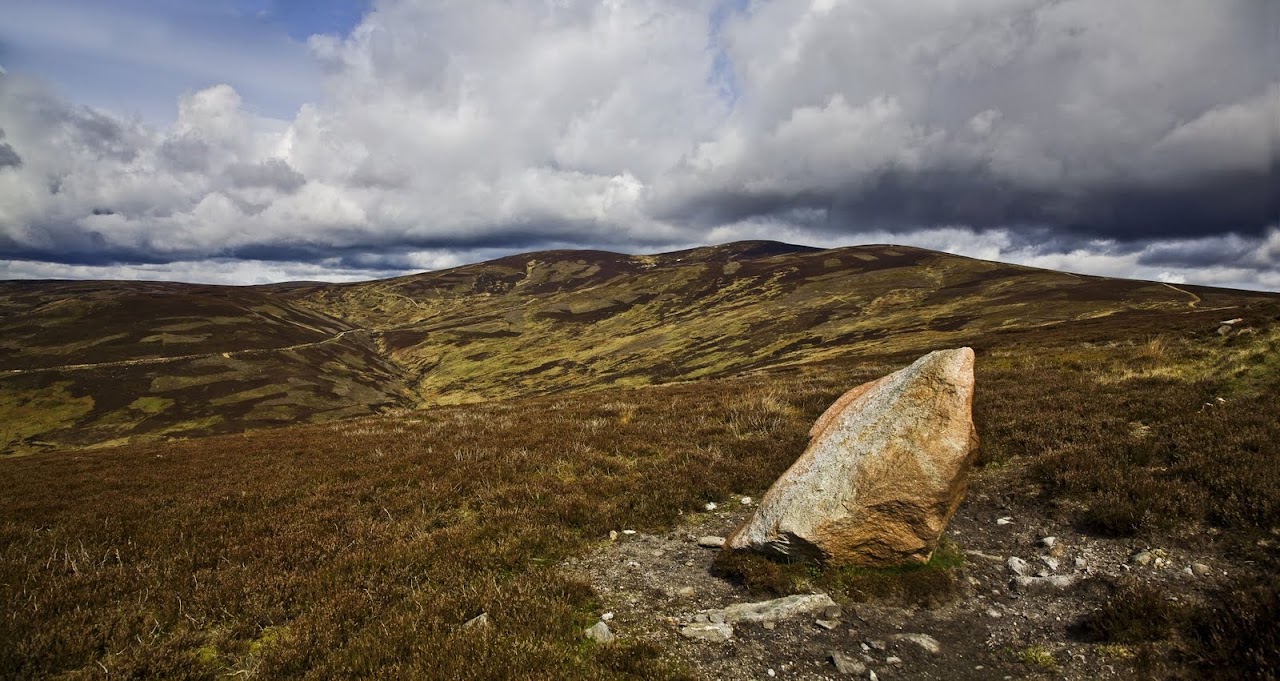 I am now seriously thinking about crouching beside that landrover and having a cuppa whilst it passes...but still no rain 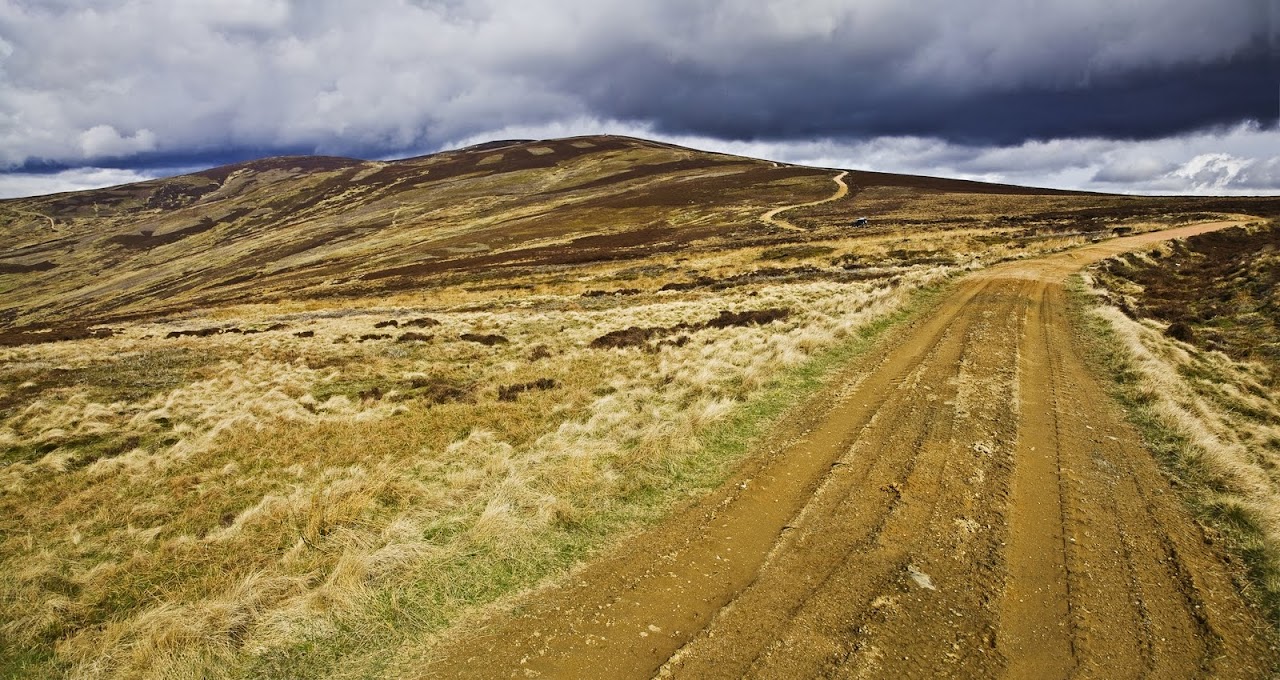 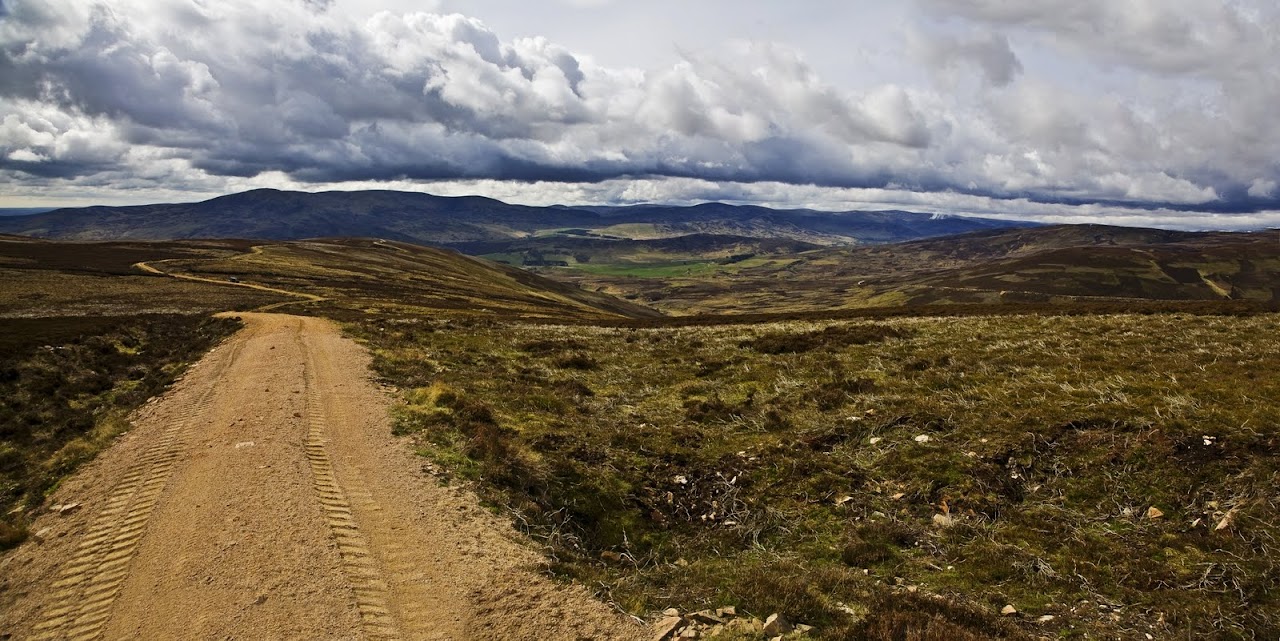 The whole area seems so barren all of a sudden as the clouds become heavier with rain, there is nothing around here for shelter

looking west I can't help but think... is it possible to go anywhere around here without Lochnagar getting in on your photo's

Oh.......that's interesting, I feel like running back down and getting the bloke in the digger and pointing out that he missed a bit.... 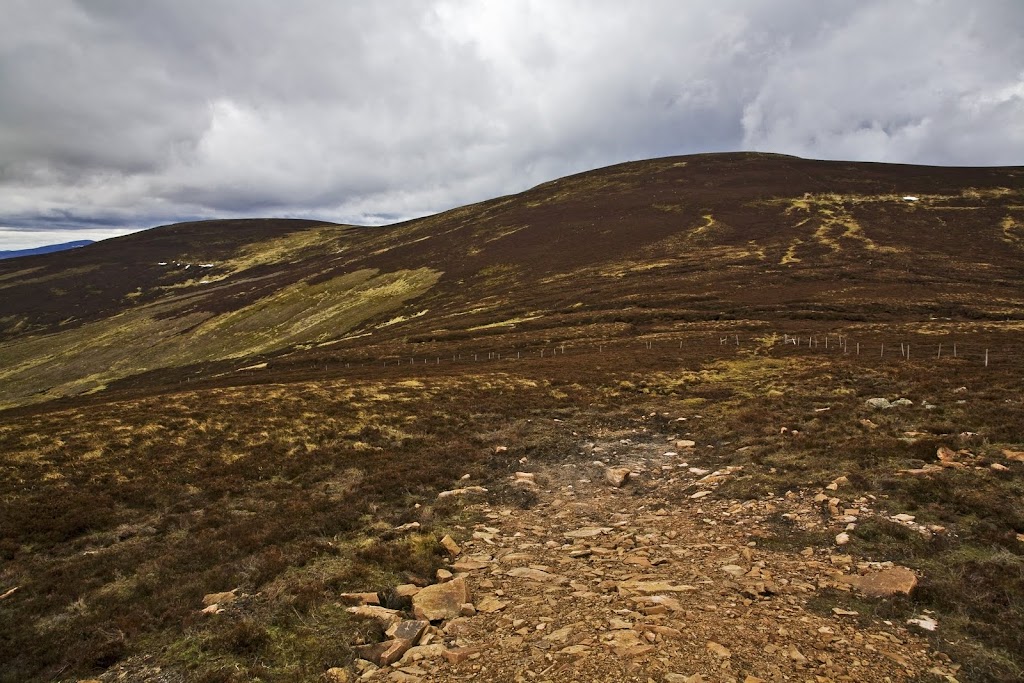 A little hag hopping to the summit then, but its dry (still) so no problem 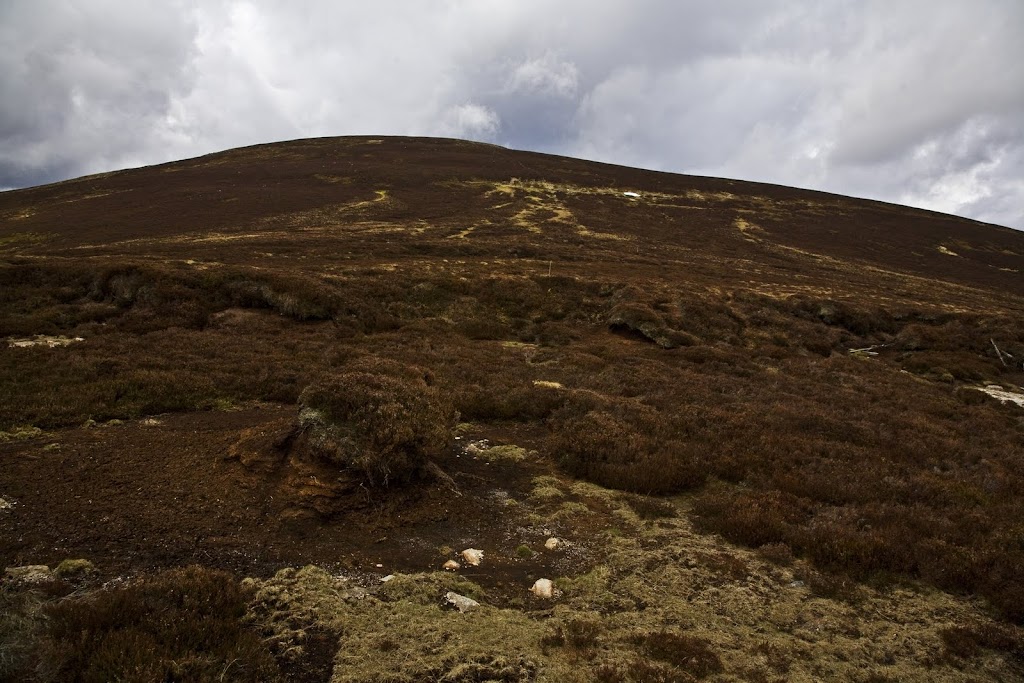 We had a short chat about the usual and the three of them headed off the way I came, they also told me the walk from Clachnaben to Mount Battock was a horrible, wet, hag ridden, journey from hell...or something like that, anyway suffice to say it's probably best avoided for a while. They hadn't come that way today but had done that walk recently. On departure the first of the three fell whilst stepping over a small wire fence at the summit, as the second went to his aid the third guy moved to a spot where the wire was much lower....then fell over it too

I confess a blurted out a short laugh involuntarily so 'Sorry fella' .........but it was kinda funny....no offence meant 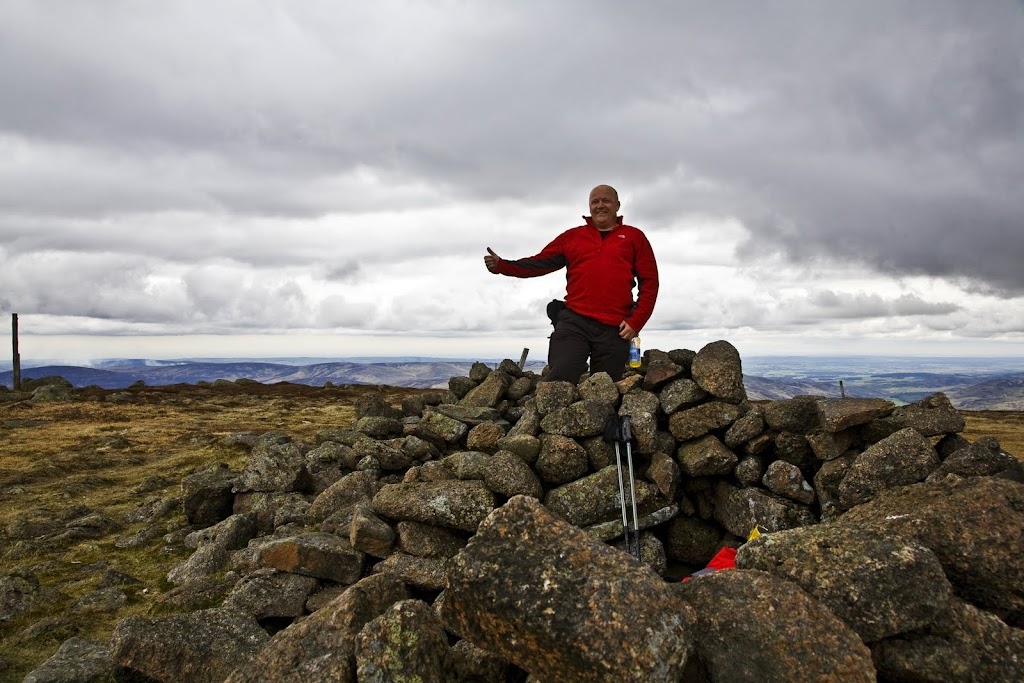 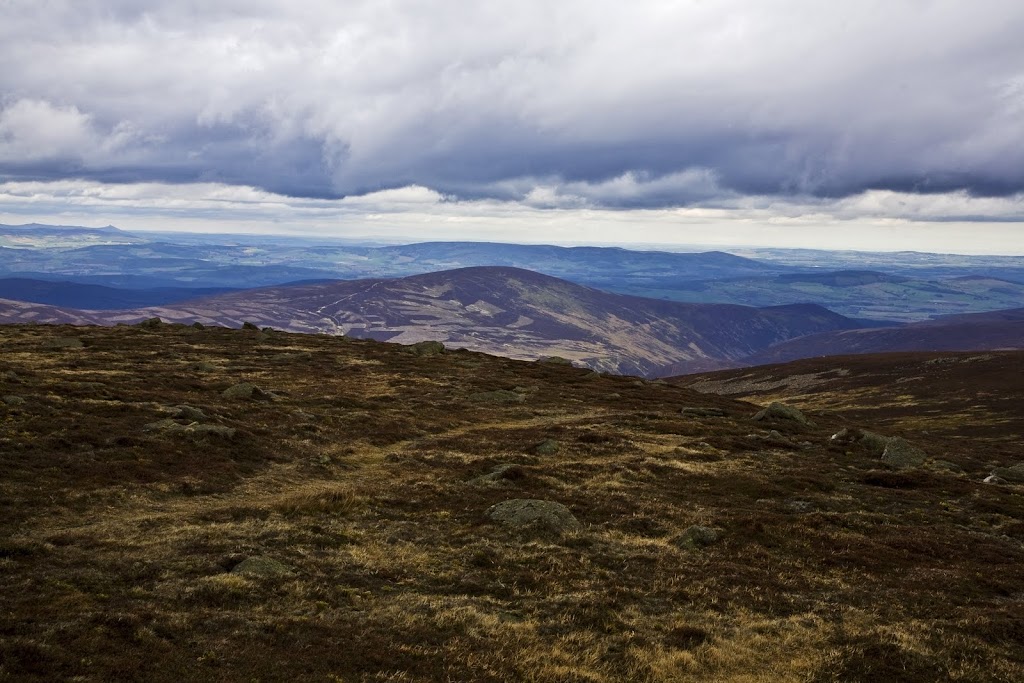 to the west is the beast that is Lochnagar.......soon ya bleeder....soon 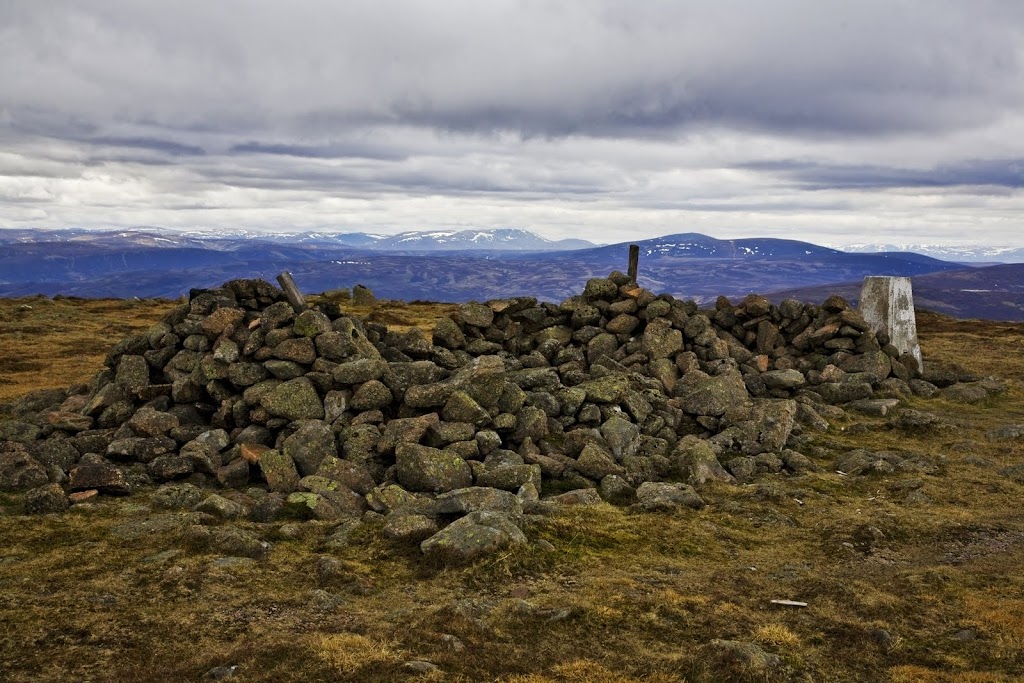 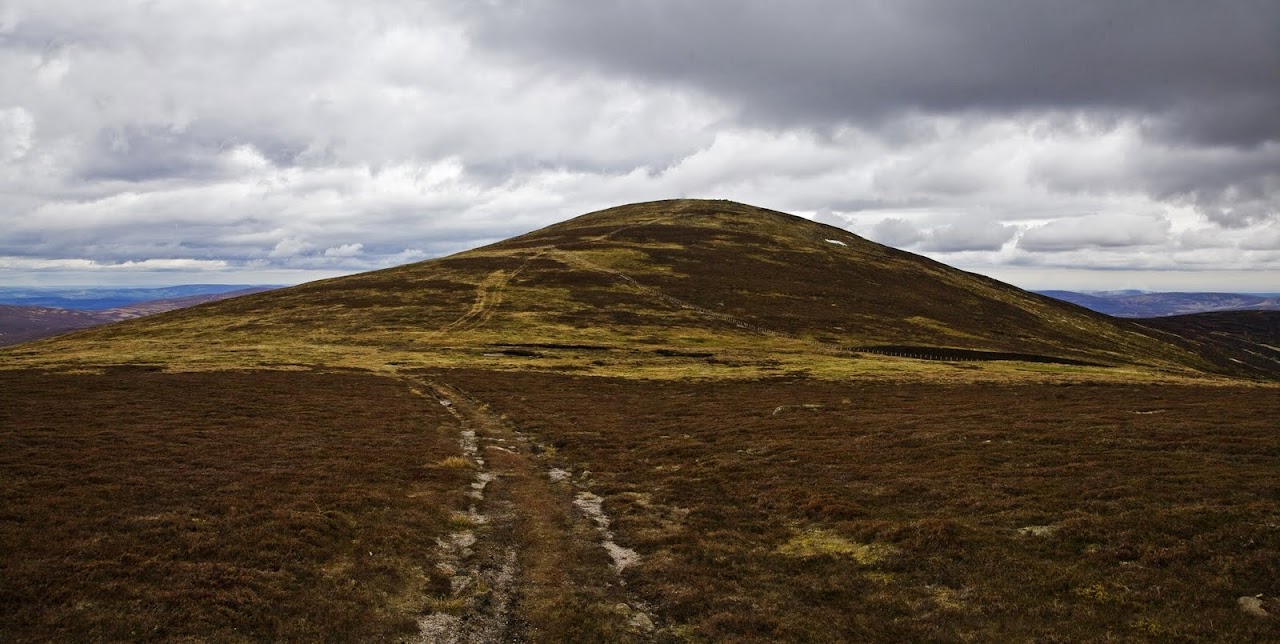 The track twists and turns a little through the heather 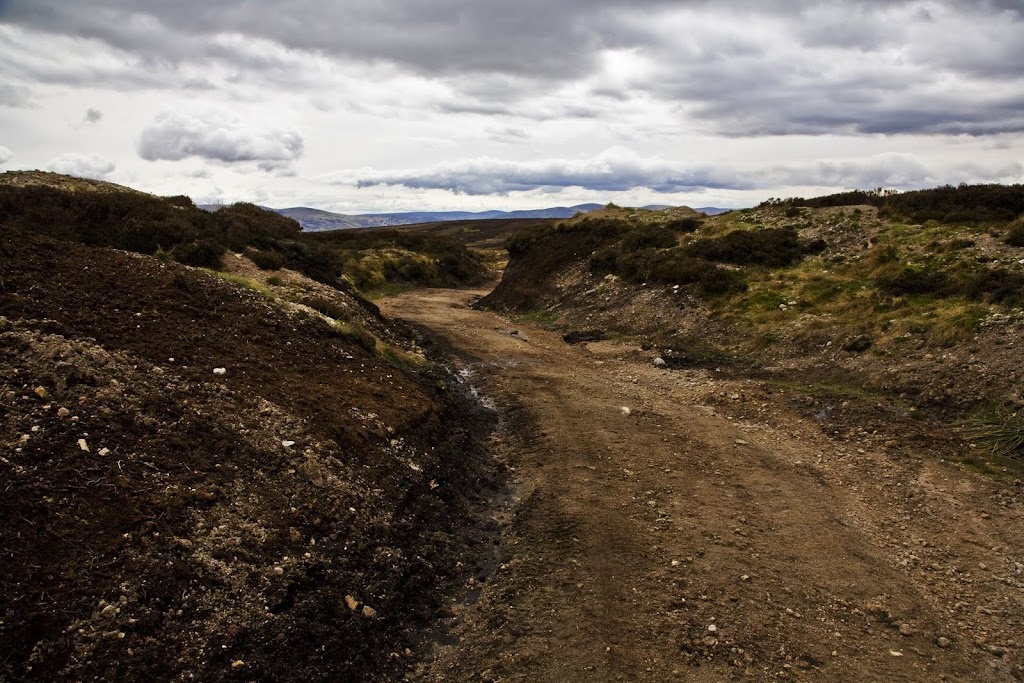 and Glen Esk to the south

Some fancy stonework here which goes a good way to explaining why there are so many grouse in this valley, you can't go more than a few yard without one scaring up beside you 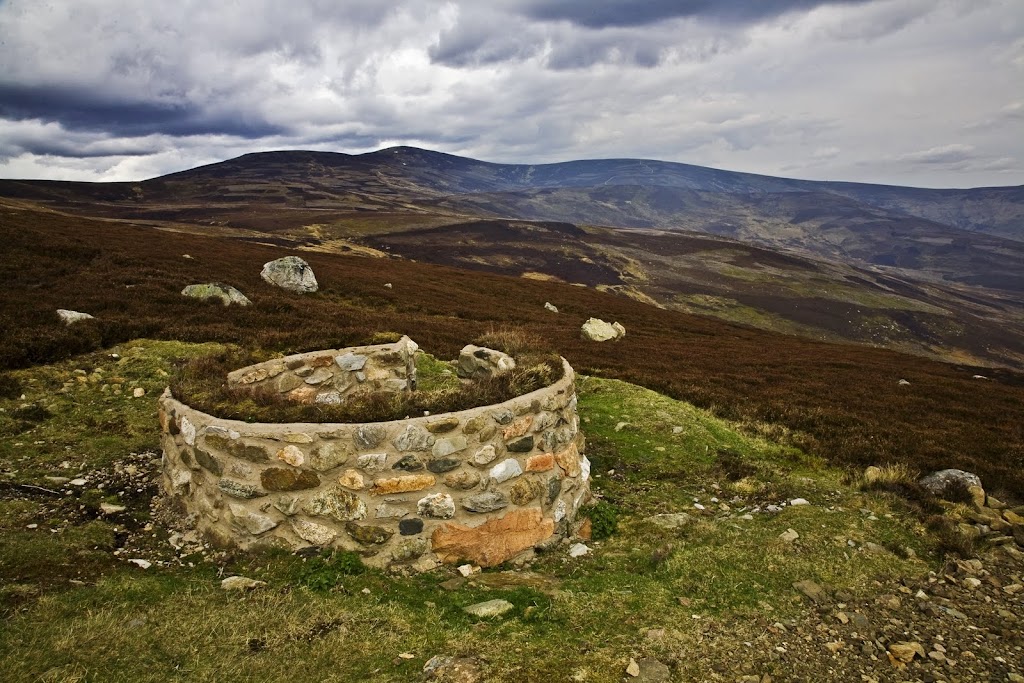 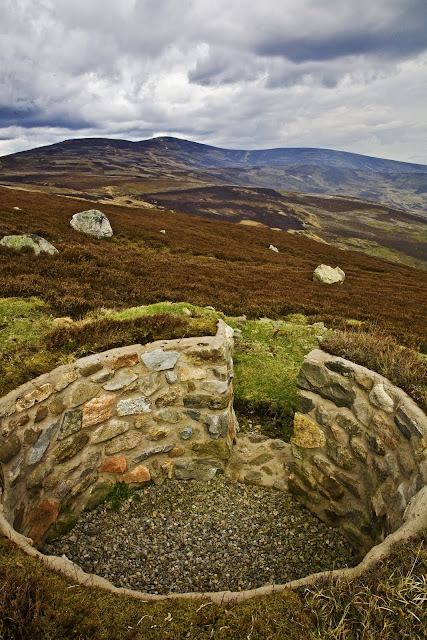 looking back up there is a little blue sky again and it seems I have escaped the rain once more...

Past the small farm with the constantly barking dogs.... 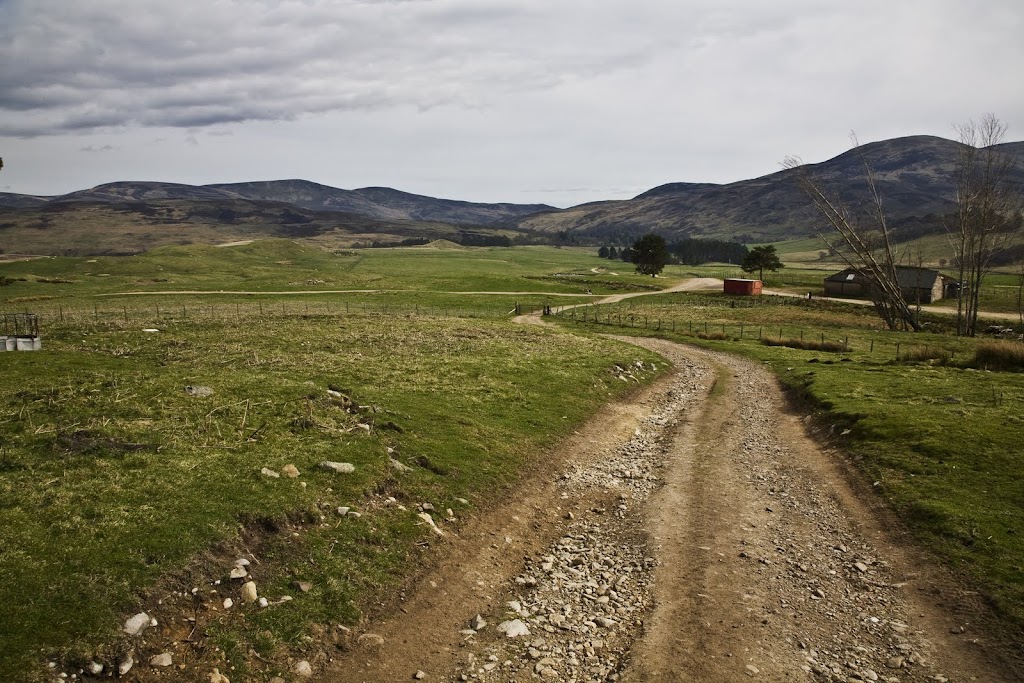 Before I could get this shot, this small water-hole was surrounded by oyster-catchers, I've never seen so many in one place, I felt bad for scaring them off 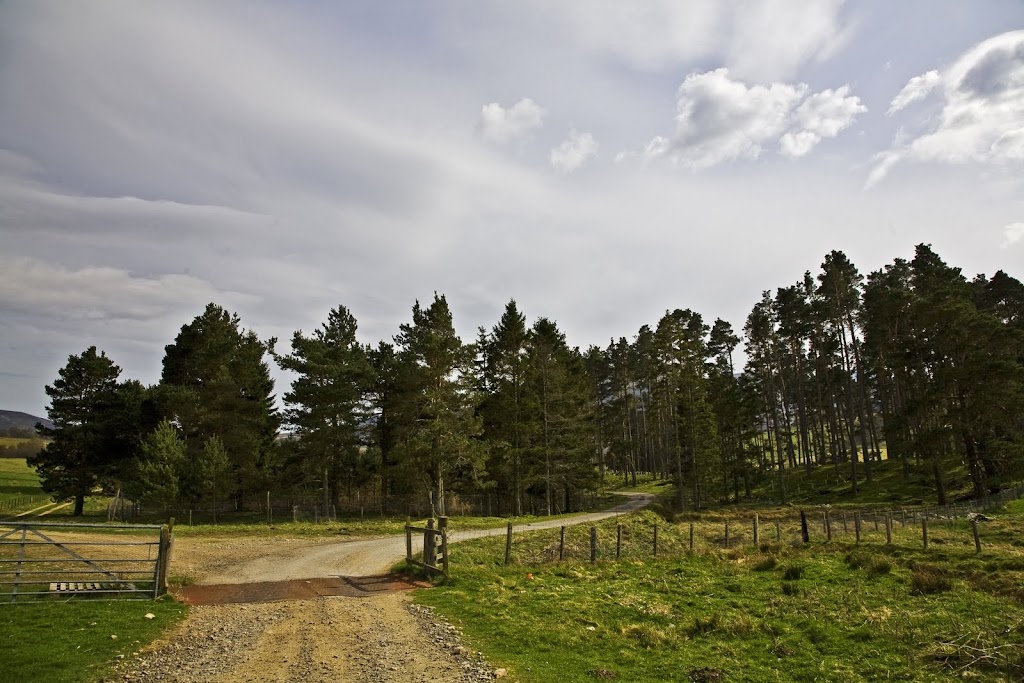 it passes through this beautifully situated farmhouse 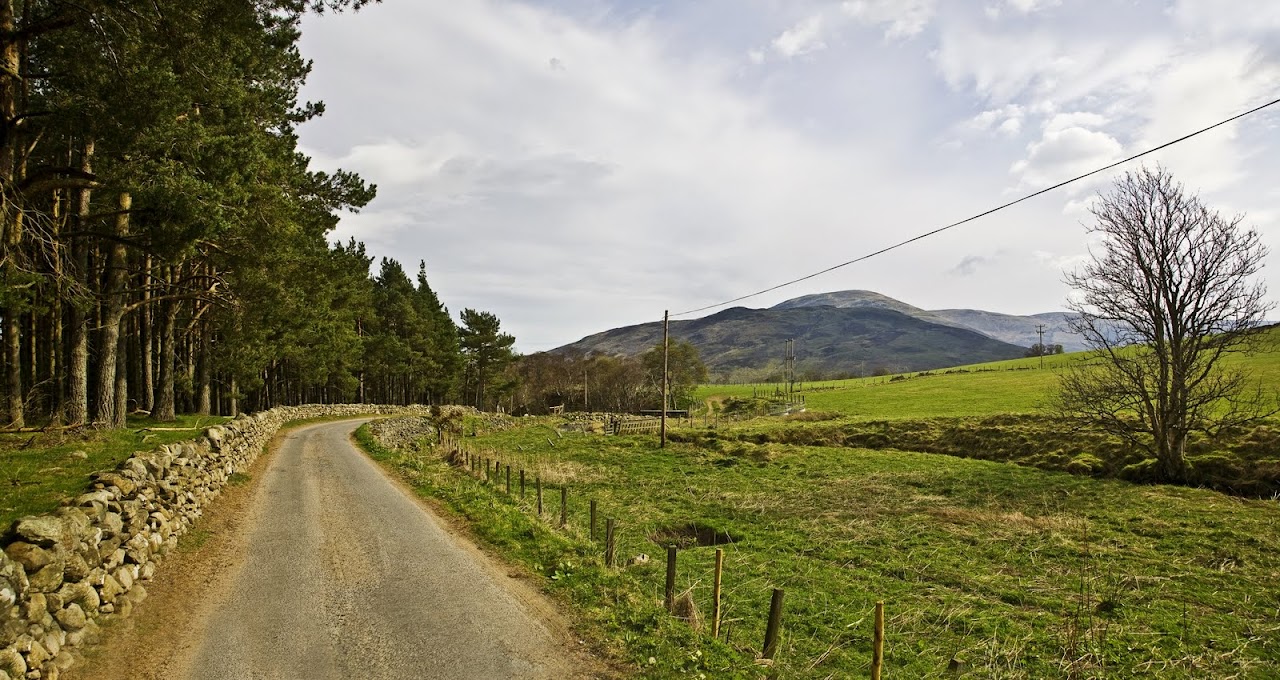 Over the bridge with the embankment covered in spring flowers 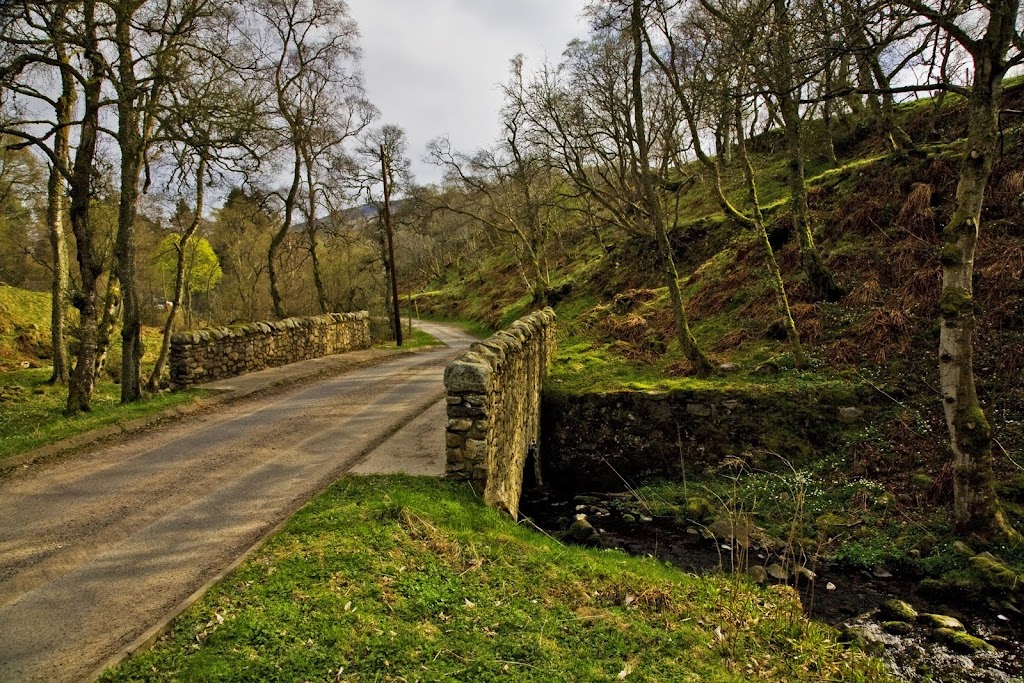 And there it is, the payphone and the car 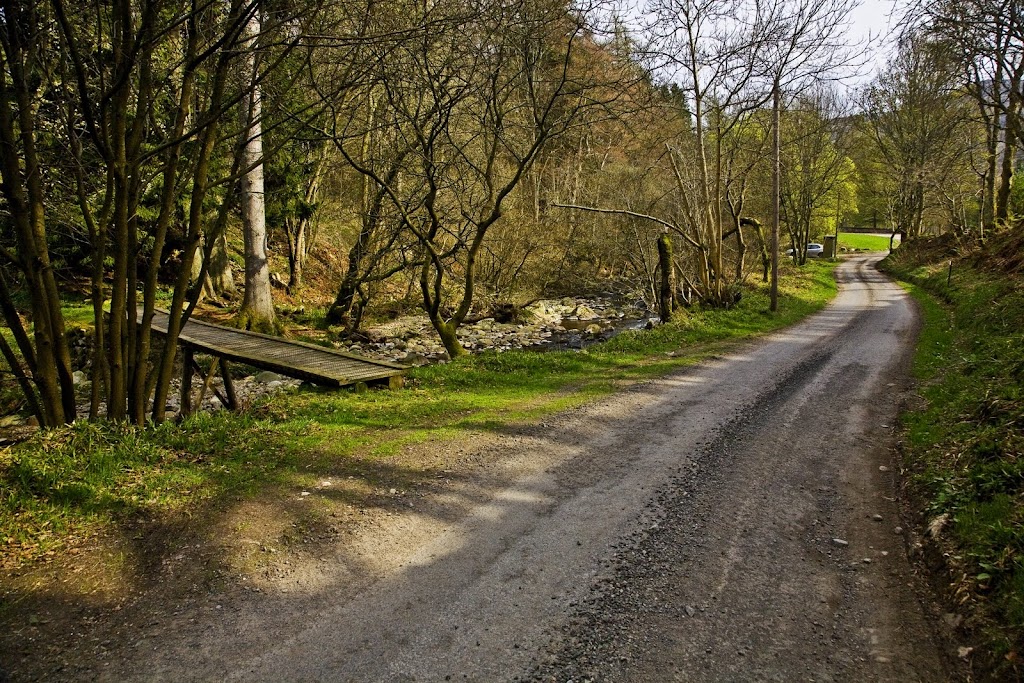 A really enjoyable walk which upon reflection, I could have extended much further.....maybe next time; at least the rain didn't get me

Did you come across any cattle on the walk? I'm a dog owner, and the last time I was there I went up and over Clachnaben and across the rough. It was in late summer, and it was fairly dry underfoot.

Thanks Iain, no sign of any cattle but plenty of sheep in the early stages of the walk and an awful lot of signs saying 'Dogs must be kept on a lead'

I really enjoy reading your reports especially as some of your walks I wouldn't even have considered or known about, but after your cracking reports and photos, its has made me look at different routes and hills for future walks.

I really enjoy reading your reports especially as some of your walks I wouldn't even have considered or known about, but after your cracking reports and photos, its has made me look at different routes and hills for future walks.

Thanks macq23, I try to capture the whole walk so people can see what it is actually like along the way, glad it helps you discover new territory. It's that kind of thing that makes it worthwhile taking and posting all those pics.

...now that I've moved from being a 'lurker' to actually posting, I must say many thanks....I took the exact same route this morning, which was made all the easier after seeing all of your detailed photo's....

...the Hill of Saughs was a bit of a struggle, glad I took my poles....and then once on top of Mount Battock it was time to hide from the rain and steady wind-chill...

...definitely a '3-layer-thermal-Buff-type-of-day' until I dropped back down from Mount Een...evetually skirting alongside Blackcraigs farm....a sheep-dog came running up to me ('oh feck, this can't be good').....and gave me a doggie-hello then ran away again (phew!)...

...a great walk, and didn't see anyone else around....very enjoyable...

Cairnbeg wrote:...now that I've moved from being a 'lurker' to actually posting, I must say many thanks....I took the exact same route this morning, which was made all the easier after seeing all of your detailed photo's....

thanks Cairnbeg - its always good to know the reports are helpful, shame about the rain at the summit but sounds like you had a good day anyway, particularly as there were no other people around