After yesterday's misty adventure in Langdale I crossed everything and hoped for no clag. It didn't work

After spending 20 minutes driving around Kentmere looking for a parking space (not easy to find up there!) I set off from the car and headed for Garburn Pass. This is a nice start to a long walk as it's a good path and not too sharp an incline.

By the time I reached the pass I was once again in the fog and had no idea what was in front of me as this was my first walk in these Fells. I picked-up the old Roman road and trudged on knowing it would take me to the first 5 summits of the day. The ascent from Garburn to Yoke is quite steep in places and it didn't help my morale not being able to see the target. I didn't hang around on Yoke as it was quite cold and bashed on to the next summit, Ill Bell. I had read Wainwright's description and was slightly wary of what I would find up there but it was very straightforward both up and down, despite the lack of visibility. Foswick was the same story.

Just as I left Foswick the fog cleared and I got a good view of the ridge and the steep path up to Thornthwaite Crag and its magnificent tall cairn pillar. The fells behind me were still shrouded in mist so I ploughed on into the sunshine.

By the time I reached Thornthwaite Crag it was clear in all directions so I had my first view of what I had just come over. I'm glad it was foggy when I did

Next was High Street - a big disappointment really as it has no features to speak of. After a short break for tea and cake (very civilised) I set off for Mardale Ill Bell, which is more of a descent than a climb going in this direction. There is then a steep drop down the stone steps to the col before striking up the steep 500ft ascent to Harter Fell. This was a really nice part of the walk and the last serious ascent of the day.

) is a bit dreary. Just a long trudge through some wet ground but has some magnificent views east and west and down into Kentmere Common. The descent from Shipman Knotts is straightforward but quite long on tired legs and feet. I was glad that the parking space I found was on the east side of Kentmere as it meant I didn't have to drop right down into the valley and back up towards the church. Worth bearing this in mind if you are doing the horseshoe clockwise.

The batteries were dead in my camera when I took it out the bag so I only managed to get one clear photograph on my BlackBerry. This is Kentmere Common with Yoke, Ill Bell, Foswick, Thornthwaite Crag, the front face of High Street and Harter Fell from left to right. 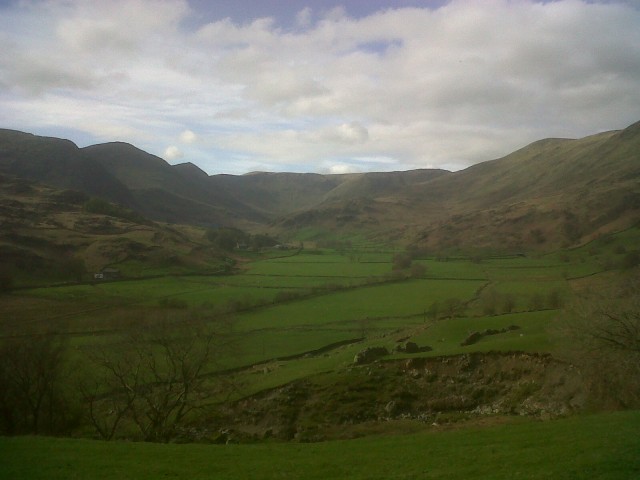 Well done on a quick 50 Derek, did that horseshoe in hot clear weather, very spectacular, you'll soon catch me up

It's an excellent round to do. I did this last year but didn't realise Shipman Knotts was a Wainwrght so I'll have to pop back one day to bag it. Pity about the camera though, I've taken to carrying two fully charged sets of batteries such is my paranoia about not getting pics of my day. Ive been like that ever since I went up a cable car to a mountain top in Austria on a gloriously sunny day with views to die for only for camera to die after 1 shot!