Late March brought unseasonably warm and sunny weather, along with the frustrating news of engineering works closing the West Highland Line, threatening to ruin my plan for a couple of easy days bagging the Loch Ossian Munros with an overnight at Loch Ossian hostel, which I'd booked a few weeks earlier, oblivious to the railway closure.

This called for an alternative and more adventurous plan. As I had the bike in the van already it seemed sensible to look at bike-in options, and I had heard about how great the track was from Moy Lodge into the Corrour Estate. So that became the plan, for a long distance raid into Loch Ossian - bag Beinn na Lap on the way in to Loch Ossian Hostel and pick off Carn Dearg and Sgor Gaibhre on the way out.

The cycle in from Laggan starts with a long grind up through forestry, where clearance works are ongoing, so I got to taste the dust of passing logging trucks as they too ground their way up the hill. Getting out of the forest and over the highpoint, amazing views opened up of Strath Ossian and the hills I'd be climbing over the next two days. 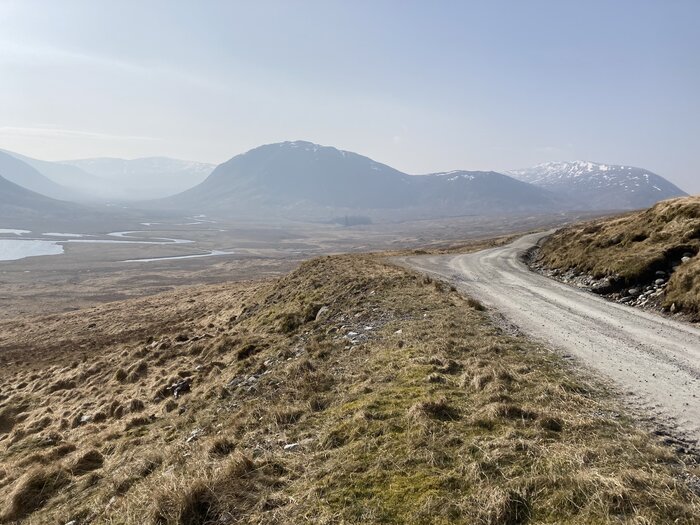 The track continues to rise gently almost all the way to Corrour Lodge, and I knew I could look forward to the return ride out again the following day, provided the weather help up. I locked my bike to the railings close to Corrour Lodge and started a short walk along the estate track on the northern side of the Loch enjoying the views across the Loch to tomorrows hills. I could have been in Canada or Alaska!! 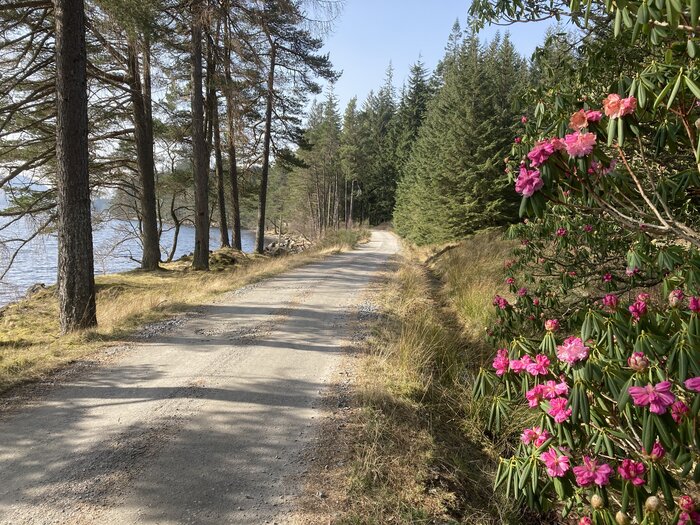 I was aiming for a small path I had read about which follows the eastern bank of the Allt Loch na Lap through the forest to a small footbridge giving access to the open moor. 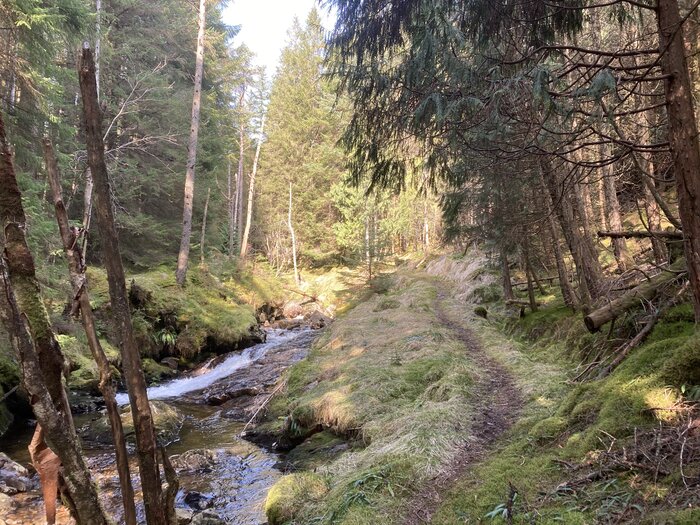 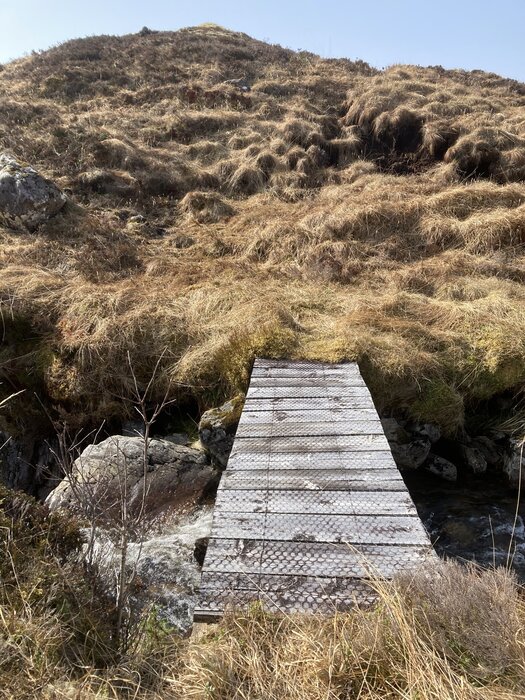 Once across the footbridge, all that remains is a 450m climb across pathless ground, boggy at first, but becoming increasingly rocky as the summit approaches. Rising over the final band of rocks, protected by a rock hard band of snow, the summit cairn and shelter appears, revealing views across the Grey Corries to Ben Nevis, resplendent in their winter coats, whilst I was down to just a t shirt and sunnies. 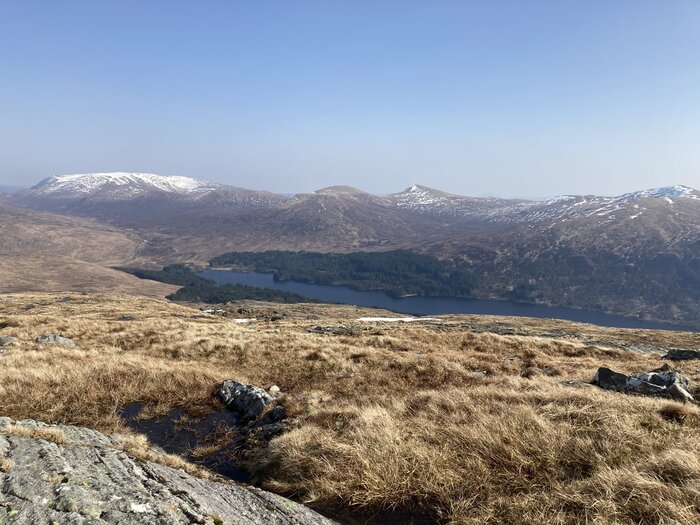 View back down and over Loch Ossian 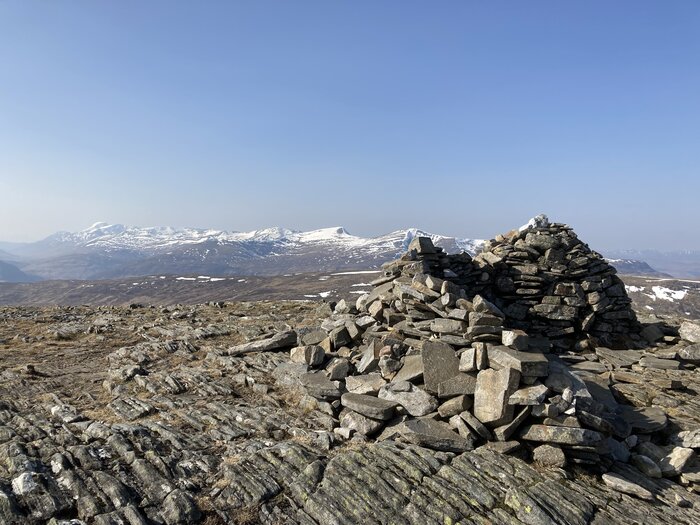 View to the Ben from the summit

With plenty of time to get to the hostel before opening time, and the afternoon sun in full summer mode, I felt no need to rush and explored the summit before slowly starting to make my way down towards Corrour via Cean Caol Beinn na Lap, picking up and then losing the path which most walkers will use to climb the hill from the train station. There was even time for a half hour snooze in the sunshine, looking over the vast expanse of Rannoch Moor. 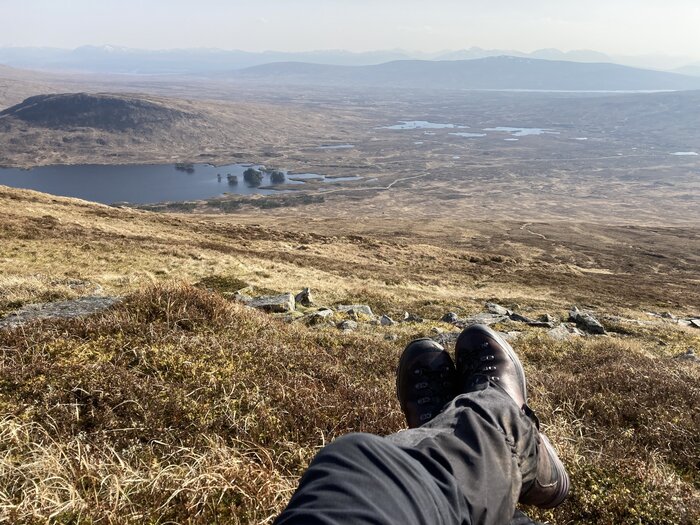 The late afternoon sun was so warm and the weather so perfect, I expected the hostel to be packed, completely forgetting that the closure of the railway for engineering works had cut this already remote spot off from the rest of Scotland. I was relieved to reach the hostel after 24km and couldn't believe it when Jan the warden told me I had the place to myself. 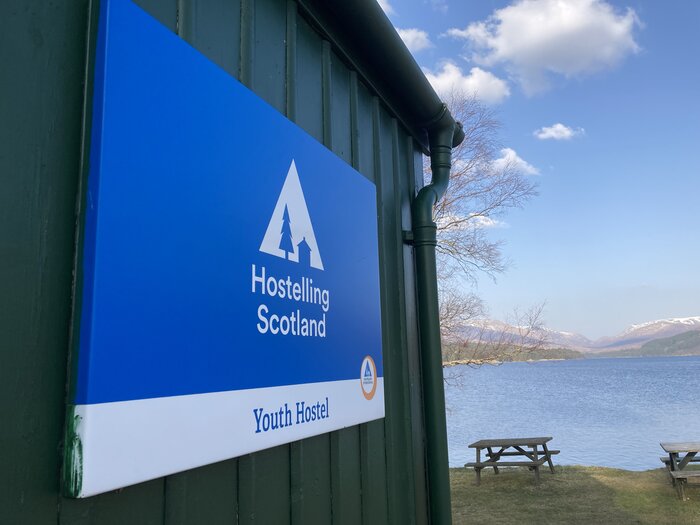 With 24 beds in two dorm rooms, including hot showers, compost toilets and a self catering kitchen, the hostel provided the perfect spot to enjoy my isolation with some lovely home comforts. I ate my tea on a bench outside and watched the sun set behind the Mamores.

Up bright and early the following morning, I still had the small matter of two Munros and a long way home to deal with. Cloud had formed overnight and descended onto the tops, sitting at about 700m, and I took the high road from the hostel, part of the original Road to the Isles, up to Peter's Rock and on up the shoulder of Carn Dearg. I was able to follow a poorly defined path in the heather from directly opposite Peters Rock, which aided my ascent most of the way up to 800m. 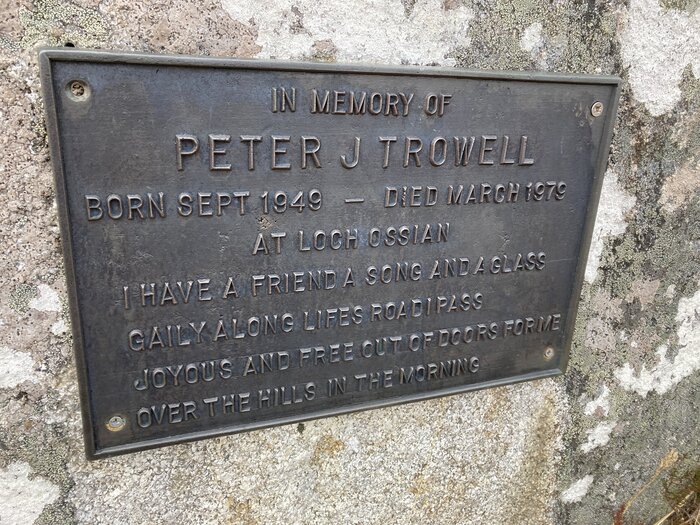 Heading upwards into the cloud and mist, it became a plod as my heavy legs were still suffering a little, as this was now my fourth day out in a row (I'd been in Knoydart for 2 days prior to coming to Corrour). As I approached the summit of Carn Dearg I began day dreaming about the view I should be seeing off to the South over Rannoch Moor when, just as I touched the summit cairn, the clouds parted and blew away to the north, leaving me to sit and eat a late breakfast enjoying the vista I had been dreaming of only moments before. I had found the secret button on the cairn which opens the curtain of cloud. I've been on many summits, begging for the clouds to clear, but this must be the only time its actually happened. As if the sun gods had given me enough for the day, the mist rolled in again as I dropped down to the Mam Ban, and once again I began to accept that I'd complete the day in the clag. It's a simple short drop and 220m climb back up to Sgor Gaibhre and it was here that I spotted the only other person I'd seen on the hill in the last four days. They must be doing the hills from the Rannoch side, as that's the only other sensible options with the railway closed. They were a mile of so behind me, so I didn't hang around for a chat.

My luck was in once again, as the clouds blew through as I reached the my final Munro of the trip, Sgor Gaibhre, and remained clear for the rest of the day. Descending off Sgor Gaibhre, I contoured around the west side of Sgor Choinnich to avoid any reascent and descended through the pathless heather, steeply at times, via Meall Nathrach Mor to the estate track just before Corrour Lodge. The Corrour Estate and the lodge itself have an interesting history, most of which I picked up from a very good book I read at the hostel, but I couldn't reconcile my interest in the history with my dislike of the hunting, shooting and fishing brigade. Anyway, I can't leave without acknowledging the efforts the estate have gone to in order to welcome walkers and cyclists, even though they do have some of the most expensive holiday cottages in the Highlands!!!!! Not for the likes of you and me!!!

I collected my bike from by the lodge and set off down the estate track back to Laggan, in a state of childish euphoria, whooping with delight as the road descended, further aided by a tailwind, and reflecting on a perfect trip. The great view back from where I'd come - Strath Ossian

Could be in Canada - but happy to be in Scotland

Instead of ruining my trip the unforeseen closure of the railway had forced me to change my plans and sent me on a wonderful two day adventure, filled with warmth, solitude and perfectly timed reveals of some of the best wilderness views in the Highlands. I'd thoroughly recommend this route to anyone. Don't rush in and tackle the easy hills in the easiest possible way - find your own adventures, push your boundaries and you'll always be rewarded with special moments, tired legs and awesome memories. The trail always provides.

Re: Turning 3 Easy Munros into an Epic Adventure

Having travelled arround Alberta and BC,Scotland just looks like a miniture of that beautiful part of the world.