Lochnagar - back in Munro business

Lochnagar - back in Munro business


After about a month and a half of climbing Corbetts and Grahams we finally conquered another Munro - and what a magnificent one! Sunday morning welcomed us with lovely sunshine and as we drove down from Inverness to Ballater it still looked good. I was ready for adventures

The start/finish point was at the car park at the end of the public road up Glen Muick (£3 daily charge). Parking was busy, quite a few walkers aiming for Lochnagar. The sky was crystal-clear blue, birds were singing... Hoooray, spring is here to stay!!

Actually, after a few miles of walking uphill it felt more like summer

our_route.gpx Open full screen  NB: Walkhighlands is not responsible for the accuracy of gpx files in users posts
We crossed Glen Muick then followed a path through the woods, which soon became a track again and offered a very nice climb beside a stream. The tops of Mekle Pap and Cuidhe Crom dominated the view. The Cairngorms on the horizon making their first appearance :)

As we continued our climb, we turned to the main path towards Lochangar, which branches off from the track to the left. After hopping over a few stones we ascended to the bealach between the main bulk of Lochnagar and the outlier Meikle Pap. There were still patches of snow along the way, but if weather stays as sunny and warm as it was on Sunday, it will soon disappear. As soon as we reached the col, a wonderful panorama of the Lochnagar cliffs opened up before our very eyes - one of the best views I've seen so far in Scotland.

Simply stunning! I couldn't resist staying on the col for a few minutes and simply sinking in the scenery... After some time spent enjoying the views to the corrie, we headed up for the Ladder, a steep slope full of large boulders. It looks a bit scary from below but as I walked up I found it quite easy. After a short push uphill I reached the wide Lochnagar plateau and looked behind me searching for Kevin - he was still half way down the slope, with his camcorder on. When he joined me after a few minutes, he said:
"Sorry to be so late. I was making a very scary movie for your dad!"
Well, my father has never climbed anything higher than a ladder up his loft and he keeps telling me I'm completely bananas. Another movie of his daughter scrambling up a boulder field would be a real shake for him - I better keep it for myself The director of "Very scary movie"

We took another short break to take more pics and admire the views once again: Lochnagar Loch and the white peaks of Cairngorms 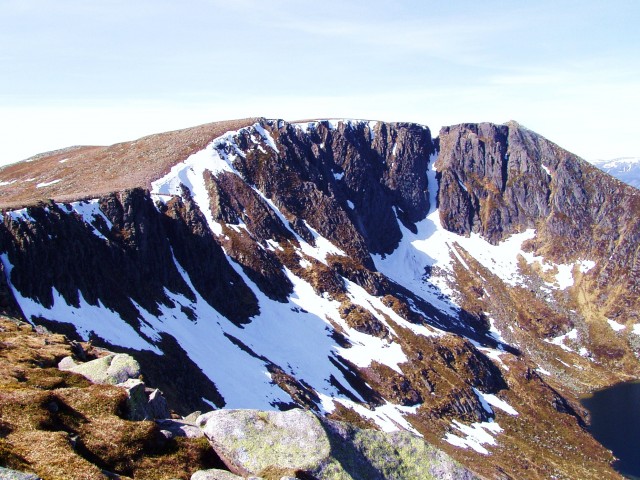 The cliffs once again The path along the cliffs that leads to the Munro summit

The final climb up to the summit cairn of Cac Carn Beag, past the smaller cairn of Carn Cac Mor was now straightforward. We had a great time lurking around the cliff edge, taking more pics from different places along the plateau... Looking back from the top of Cac Carn Mor The two summit cairns, Cac Carn Beag one to the right 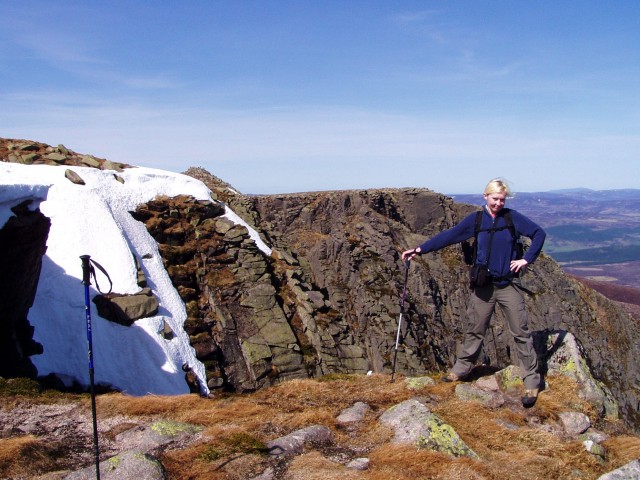 Eventually we walked up to the trig point, situated on a big rocky outcrop. After having some fun with the indicator marking directions for other hills, we decided it was time for lunch Kevin by the trig point Loch nan Eun and the cliffs of Carn'a Choire Bhoidheach The indicator may be also used as a seat :)))

As a return route we took a path down the Glas Allt glen. A lovely detour and a good opportunity to visit lovely waterfalls. It would all be perfect but for very aggressive wasps flying around. One of those little beasts gave me a nasty sting The path down Glas Allt 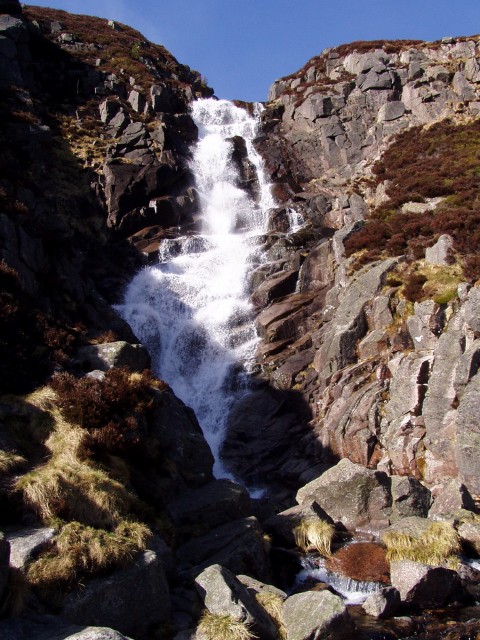 The falls from below

We finished our route by following the path down to the track that circles Loch Muick. The final walk along the loch shore gave us some more good views to end a well spent day The banks of Loch Muick

Enjoyed reading your report. Your pics really capture the scenery well, I feel like I'm there. I've climbed Lochnagar 3 times and haven't had weather as clear as you did - brilliant day.

Great report panther, this is my all time favourite mountain, for a number of reasons. You managed some cracking photos, done this twice now though not for a few years and both times the weather was very bad with little or no views to be had! Planning another trip up soon so fingers crossed eh? Keep them coming.

Great stuff, love those photos and the snow that still remains.

Lochnagar on a cracking day - well done and nice choice

Excellent photos. Love the pictures of the Loch with the snowy cliffs in a horseshoe. Beautiful weather. Nice.

Fantastic,great report and pics - I did Lochnagar from Glen Muick on Monday and took photo's from just about every spot you took them

, I too stopped and stared from the col at that beautiful corrie but confess to walking 'around' to the summit cairn after the ladder (near killed me getting up there

) will be posting mine tomorrow

Walked the full circuit with my brother-in-law last year and has to go down as my most favourite, epic munro bagging expedition so far. The scenery when you get a clear day as you did is jaw dropping.

It seems you were the only people there at that point. Lucky you. We had about ten people around us at the summit, all vying for photo's at the trig.

Nice report and photo's, just be careful which one's you show your dad!