On Saturday 30th May in stunning conditions we had the intention of bagging ourselves 7 Wainwrights over 16 miles and completing a loop around the entirety of Great Langdale Head, here’s the report and some pictures of our long but rewarding day;

We started from Dungeon Ghyll Hotel and walked the short but steep climb up Stickle Ghyll to the tarn under Pavey Ark.
Due to the extremely nice weather and the popularity of Landale the first part of our day felt more like a slog around the M25 there were so many people. Once we reached the tarn we turned our attention towards Jacks Rake which I had seen in Sue’s post (viewtopic.php?f=16&t=747) Jacks Rake at the bottom

My friends Border Terrier ‘Oscar’ was with us and we both wondered how he would fair with the scramble ahead. Needless to say we had nothing to worry about, he shot up the Rake with little problem. I’ve tried to get the pictures of the tricky bits but like Sue pointed out, its a little difficult snapping away when your clinging on by your finger nails! Once at the top we headed across to Harrison Stickle, Loft Crag and Pike of Stickle. 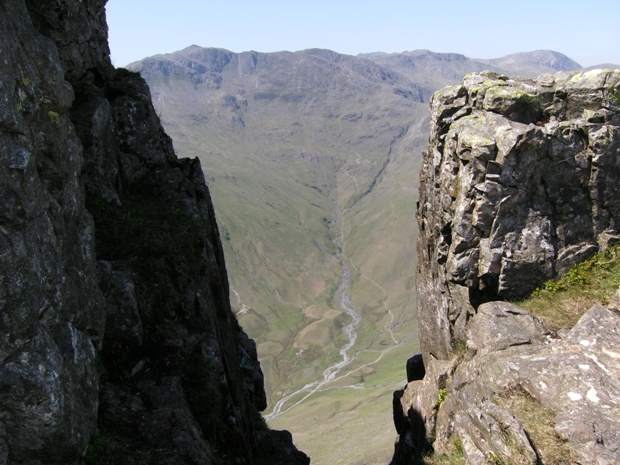 These were rewarding as they offered us some great views back down into Langdale, the crowds had also eased somewhat which made our walking a little easier too. After Pike of Stickle we had a pleasant and swift walk across the grassy slopes between Rossett Crag, High Raise and Upper Langstrath towards Angle Tarn. Parts of this walk were quite wet with peat bog sections to navigate. I’m only please we weren’t there in wetter conditions as I’d imagine this would be a tedious section. We made Angle Tarn our lunch stop and what a lovely stop it was. With boots kicked off and fresh air around our hot feet we made ready for the assault on Esk Pike and Bow Fell, the latter being the highest on our route at 902m

As we climbed to the shelter between Allan Crags and Great End we were rewarded with stunning views down into Great Moss and also the Scafell range towering above. Looking up towards the summit of Esk Pike 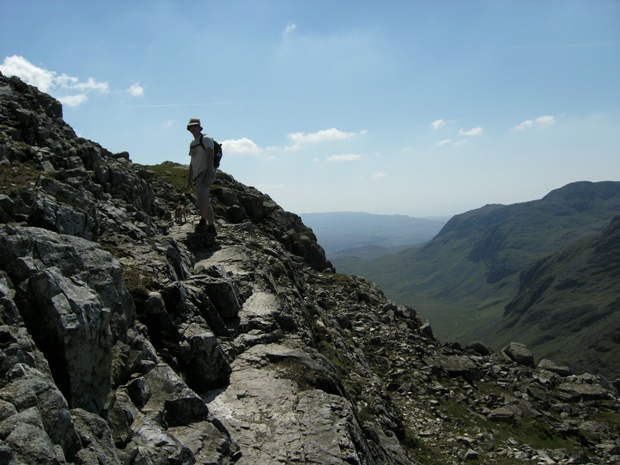 getting 'lofty' on the way to Esk Pike

Esk Pike was reached with no problems save for the heat and we were now starting to feel the mileage we had done so far. From the summit we could clearly see our next challenge and the route to it – Bow Fell. Approaching from the N/W as we did gave us a steady climb from Ore Gap which didn’t trouble us too much. The summit was quite busy but not half as busy as it looked when we saw Scafell Pike! The summiteers on Bow Fell with the Scafell range behind We came off Bow Fell and headed towards our penultimate set of summits on Crigle Crags where we had to negotiate another scramble. Oscar had to be manhandled down as the 12foot drop was too much even for a mountain hardened Border Terrier. Cringle Crags afforded some great views over the peaks we had done even though the sun was westing and our legs were feeling the strain. Looking back at the peaks already done

We could see our last summit ahead of us – Pike of Blisco. Although we were both hot and with aching legs we decided that we came to do 7 and 7 we would do – Oscar looked at us with those soulful eyes and if dogs could speak, I’m sure he would have asked for the car keys and a couple of quid for a pint and been quite happy to take the shorter route back to the car!! looking back at the Langdale Pikes from Blisco's descent route

None the less we summited Blisco late in the afternoon and with the satisfaction that we had conquered the entire Langdale range headed down to the car. Our totals were 16 miles and 9 Wainwrights on a very hot day in the Lakes

Great report and boy they are a hard 7 Wainwrights, hope no one from the RSPCA reads that and sees what you did to Oscar, good job they are a hardy breed. I thought Crinkle Crags was hard work, we did it the other way from Dungeon Ghyll, we will be going for a week soon so my husband is sorting out routes to do,once again great report and glad you conquered Jacks Rake

Glad you enjoyed the report Sue – and yes you are right they were hard Wainwrights to do; especially in the heat we had last Saturday. Its Tuesday now and my calf’s are still aching from all those climbs. As for Oscar – I’m not too sure he will be as enthusiastic the next time my friends calls “come on, walkies”

Seriously though, he’s absolutely fine and like you say; Borders are a hardy breed

Now that would make for one long days walk

Hi Paul, looked out a photo of me at the top of the Bad Step on Crinkle Crags, we were going the opposite way to you so the summit or Long Top was next, hubby went around Good picture Sue, thanks for digging that out - like most pictures taken, the camera never really shows the angles or gradients as they really are, you must have had quite a stretch reaching some of the hand holds if you were going ‘up’ the bad step. Little wonder Hubby went around.

Like getting older – we had gravity helping us come down

I seem to remember you could slither through a hole beneath the chockstone on the left, or has that got blocked up?

It must have got blocked up – I don’t recall seeing a hole but then again, that’s not to say one doesn’t exist

How long has it been since you were in that area Paul?

Maybe 8 years since I was last in Great Langdale, but probably 12 or more since I last crossed Crinkle Crags... must be getting old

There's no way through now, have a dvd with the great Eric Robson and he says there used to be a way through, I suppose that stuff has been washed down into that area, take care, Sue

Feel tired just reading this report, have been round both sides of Langdale,separately I hasten to add, our route up Pike o' Blisco was done in Feb a few years ago when every stream was frozen solid, and the tops covered in snow. It made the "tricky bit" on Crinkle Crags most entertaining, not that we described it that way at the time, coming down from Ore Gap we encountered huge sheets of ice, and a party of bewildered American college kids - God help America!We arrived at Angle Tarn to find it frozen solid quite a sight!Our next trip later the same year in summer saw us head up towards High Raise from top of pass - terrible blisters that day - with similar weather to you guys, coming down off the Pikes like two Olympic athletes .... to New Dungeon Ghyll Bar I hasten to add to quench HUGE thirsts.