Share your personal walking route experiences in Scotland, and comment on other peoples' reports.
Warning Please note that hillwalking when there is snow lying requires an ice-axe, crampons and the knowledge, experience and skill to use them correctly. Summer routes may not be viable or appropriate in winter. See winter information on our skills and safety pages for more information.
Post a reply
53 posts • Page 1 of 4 • 1, 2, 3, 4


It may not seem like much to you 'baggers' but to me this was a real landmark. After my arrival in Aberdeenshire from the US, Lochnagar became a symbol of recovery for me, I told my wife that I would get up there before summer and that when I did the leg was (at long last) fixed. No matter what summit you make in Aberdeenshire, the familiar corrie of Lochnagar teases you from afar and it reached a stage where I was beginning to feel 'haunted' by it. So I needed to get it done.......

Well.............Monday the 18th April was the day; I set off for the car park at the Spittle of Glen Muick with genuine excitement at the thought of making the summit of this leviathan. The day was made better almost immediately with a sign on the pay and display machine that said "both machines are out of order, have an enjoyable day" £3.00 saved before I even got the boots on

A couple asked me directions whilst I was doing the boot's/ tea / map check thing at the car, turns out they were from Buffalo New York, as I had stayed there for a couple of nights we related well and ended up having a 1/2 hour reminisce about their city and my trip to Niagara Falls that had taken me there, and their trip to Scotland that brought us together at Loch Muick. It was a nice laid back start to a beautiful day.

I set off along the track past the visitor centre as I have done so often on walks around the loch with my wife, but this time I turned right and headed NW toward my 'Nemesis', even from here it looks down upon you as you begin your walk. 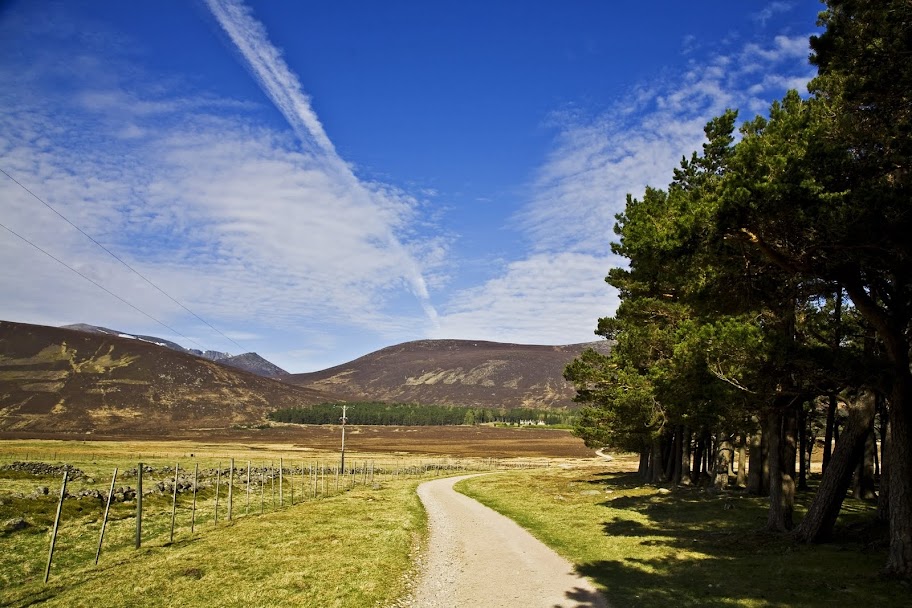 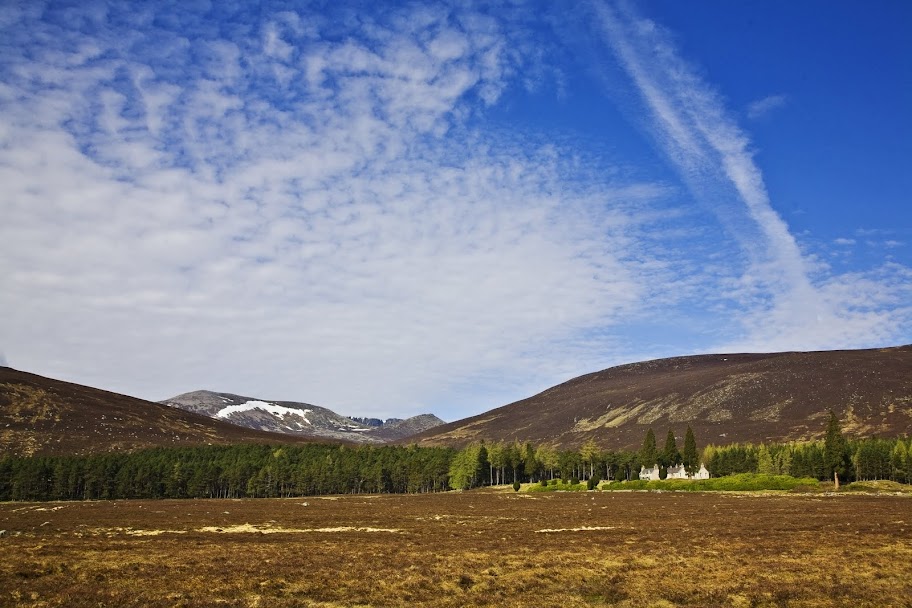 The path then cuts through a small, short wooded section which gave a welcome break from the sunshine today 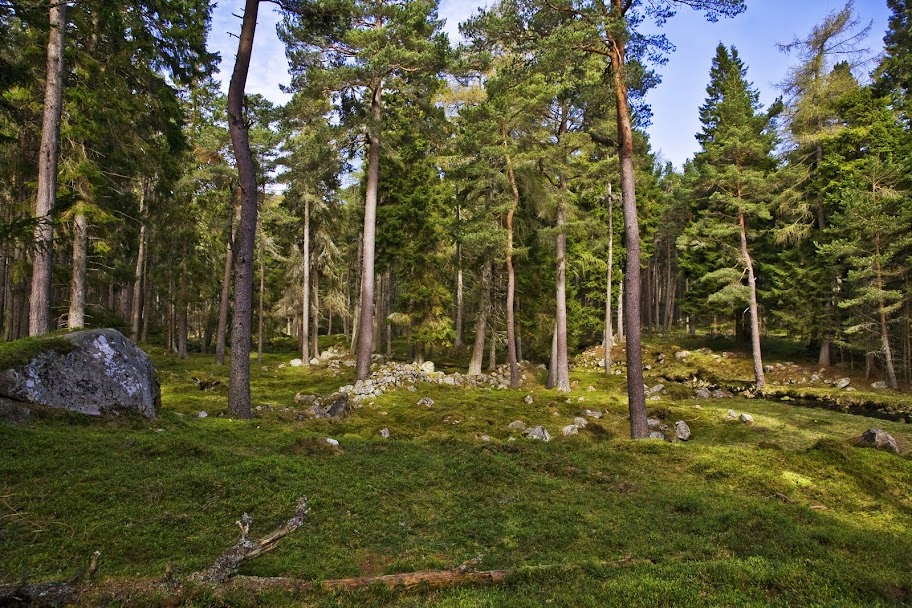 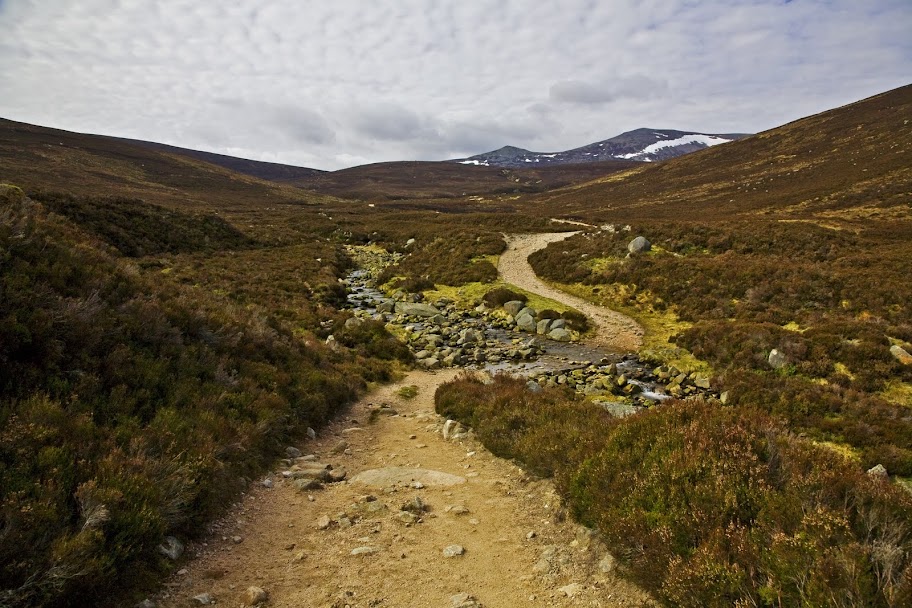 I hate it when I have to descend before ascending .....grrrrrrr 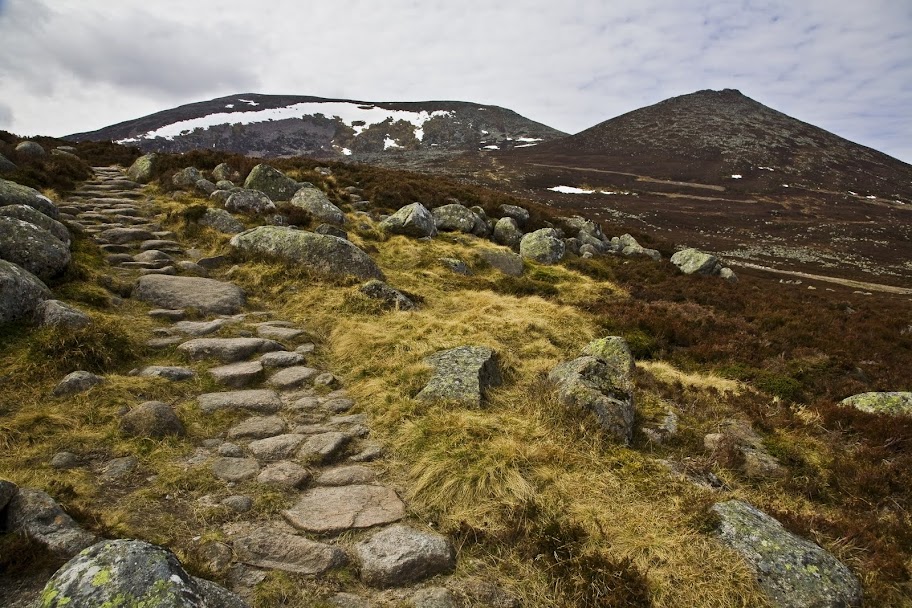 but that path gets a little 'lost' in places

He stopped for a chat and we walked a while together, turns out he does Lochnagar once a week to keep fit

but on reaching a good path again it was apparent that I was holding the guy up, I told him to get going and I'd see him up top later 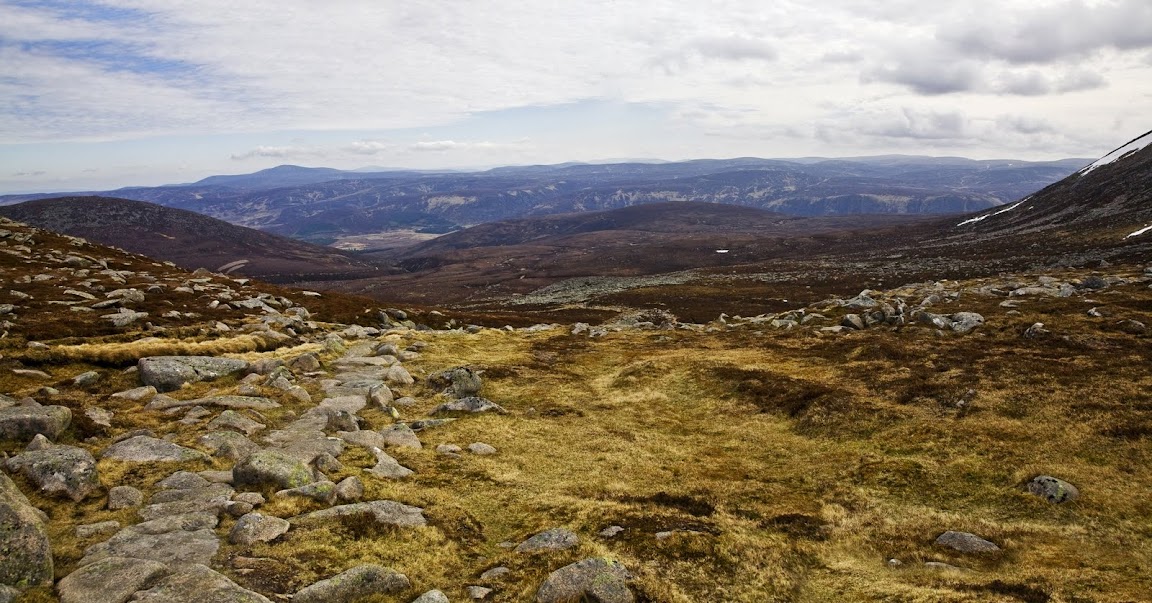 The first view of the corrie over the top of the col almost made me run toward it ......... almost

and then finally, there it is, the clouds have draped themselves over the nice blue sky but I don't care

Looking at the guy I spoke to earlier climbing the 'ladder' left me thinking I may have taken on too much, looking across to the summit cairn and trig point perhaps I had been a little too keen to get up here. I sat and had a drink and thought what the hell, I'm carrying on. As I ascend I look back to see 3 more intrepid walkers coming up behind me

I stayed at this spot a while munching an orange and taking in the view, there was almost no wind and a pleasant temperature

then another set of well constructed steps to ascend again 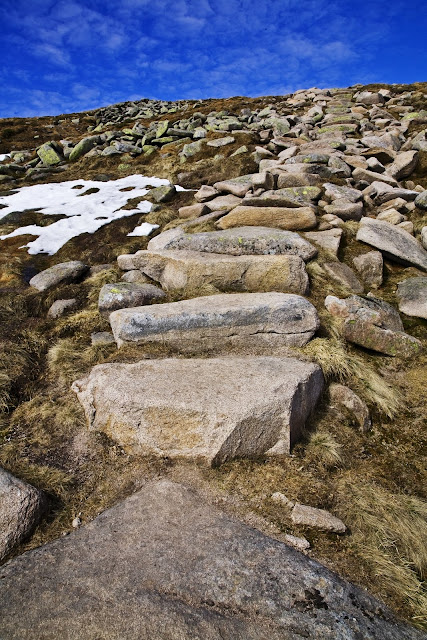 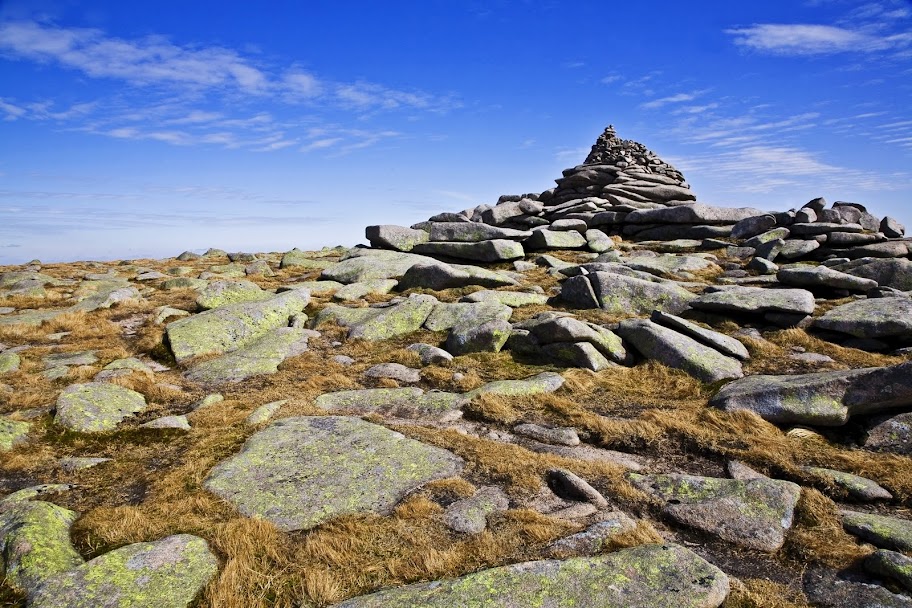 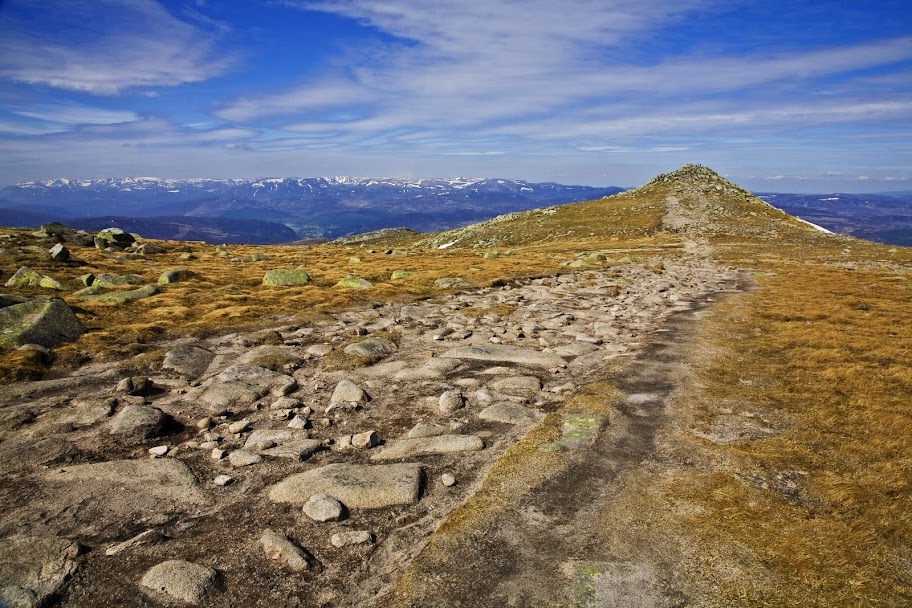 The views are spectacular, looking SE toward Meikle Pap 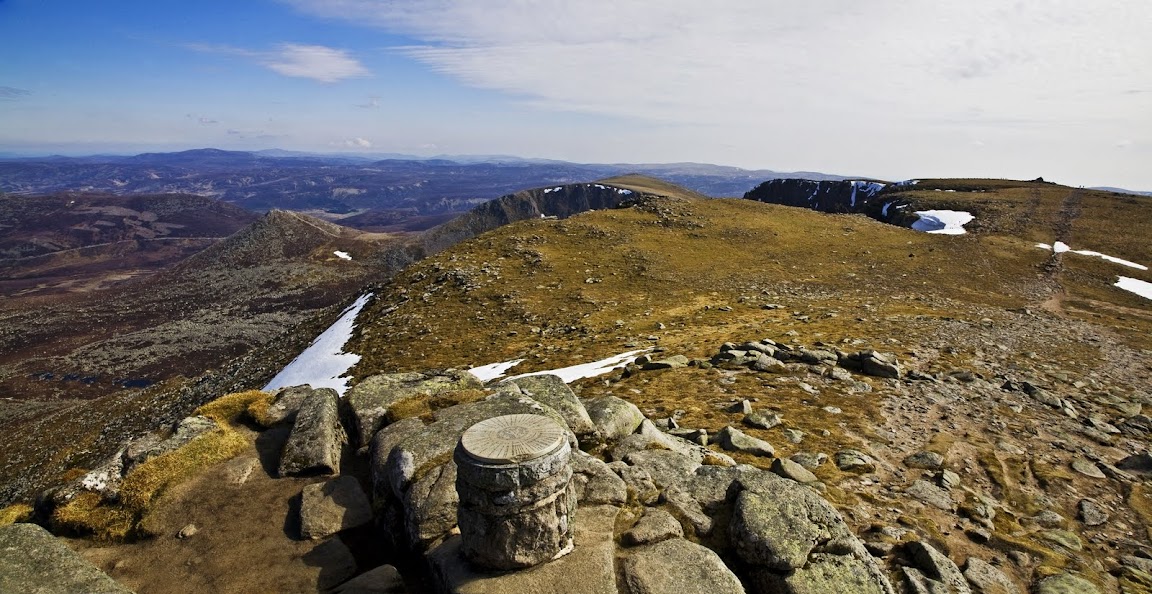 Can't even tell that it almost killed me getting up here 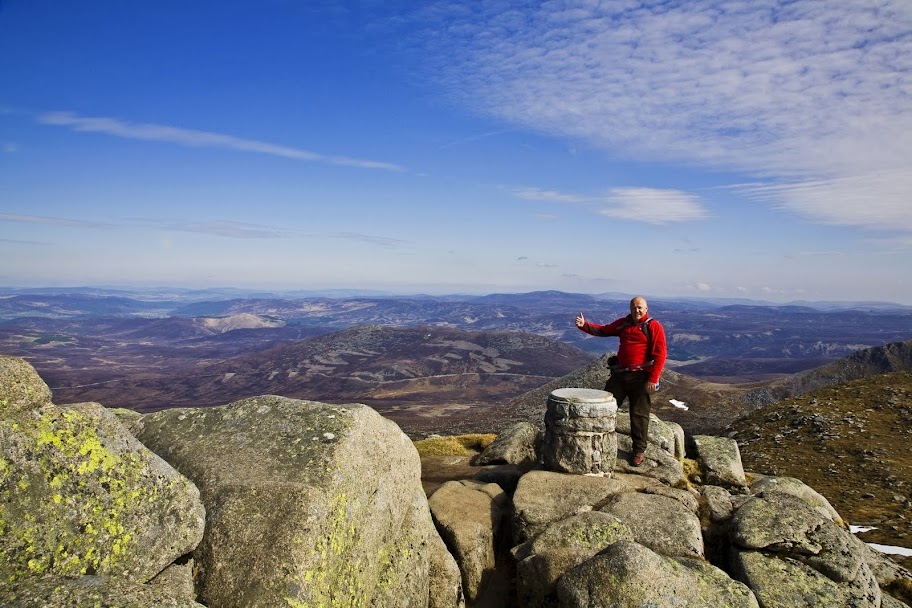 looking over Loch nan Eun toward the white mounth circuit

and one at the trig point...well rested now 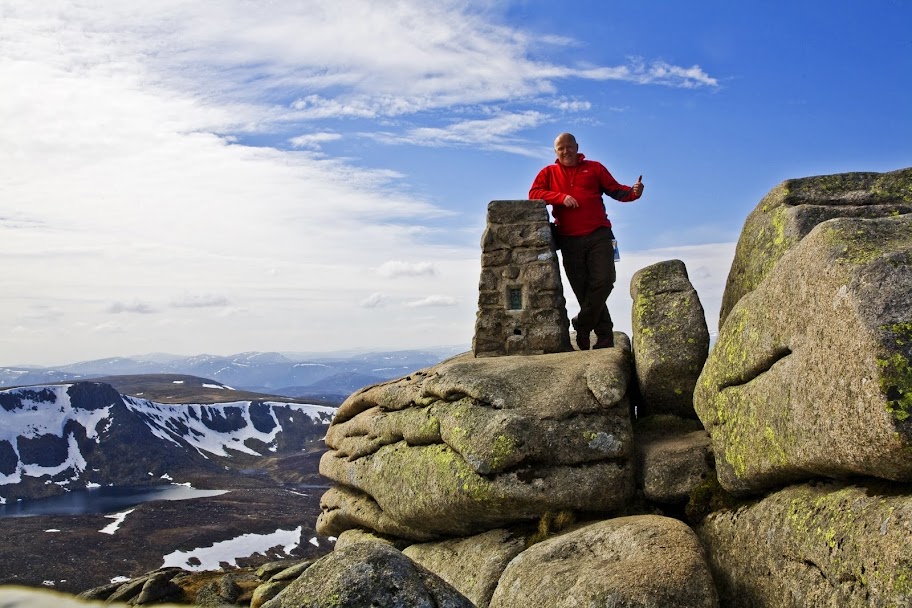 We have all see this now I reckon 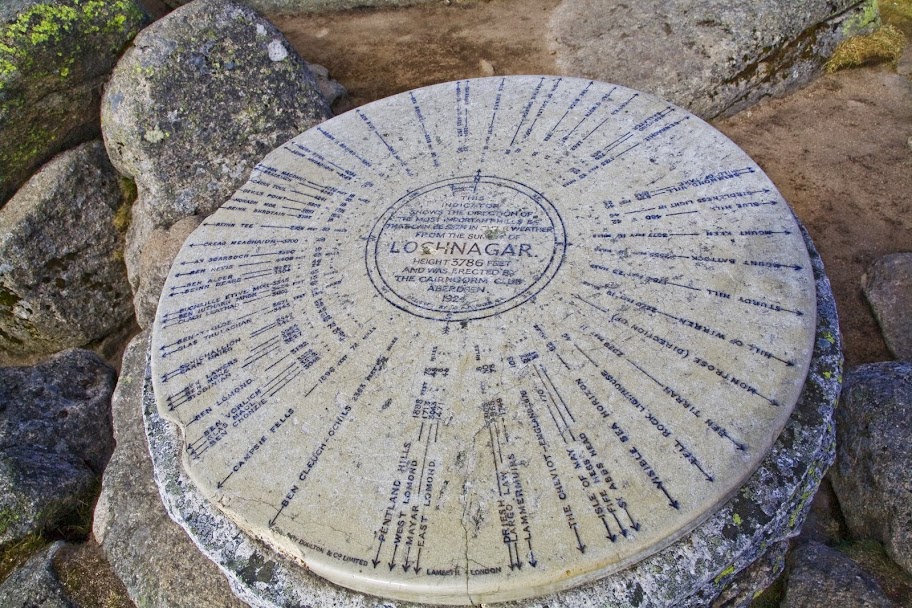 Here's the two of them together and the view NW

after a great 20 mins or so, tea, snacks and photos and with 6 people on the way to the summit I set off down again, heading toward the corrie rim for a few more photos

whichever direction you chose the views extend for miles, this shot looks north across the balmoral forest in the warm spring sunshine this is heaven 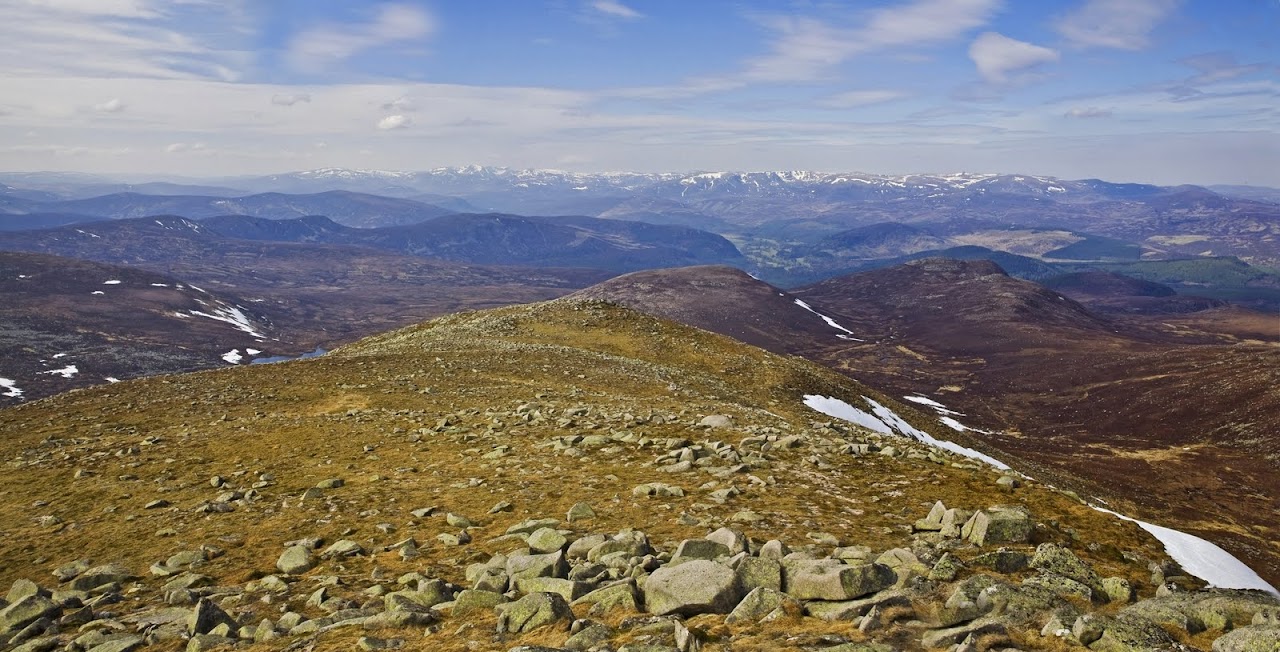 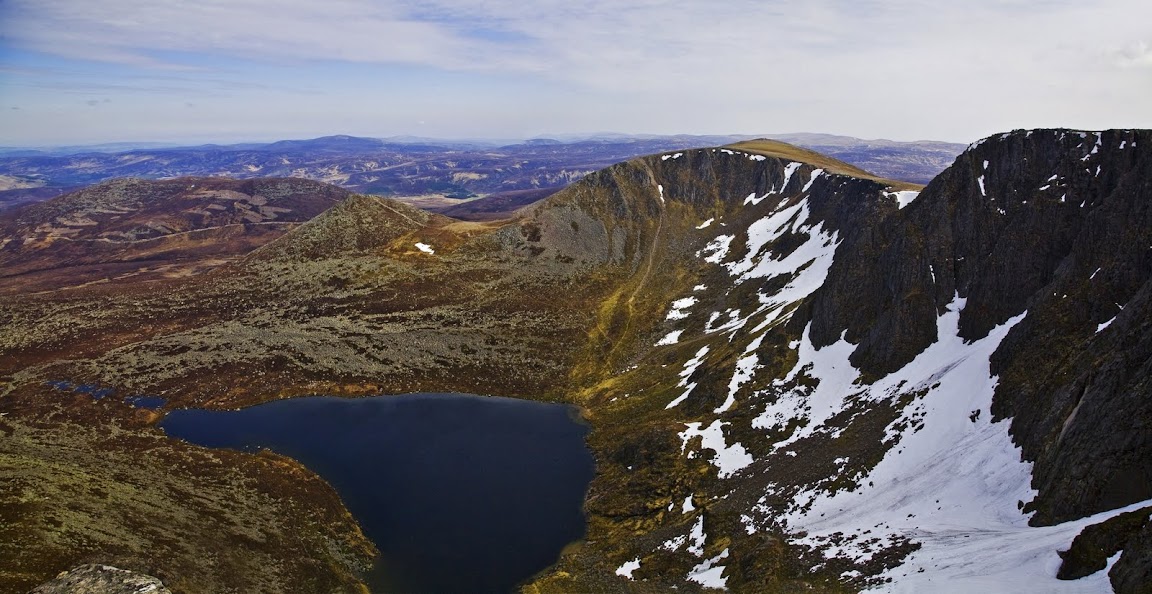 This one is a vertical panorama , the first one I have ever done and I love it, it allows you to see much more vertical than a standard panorama 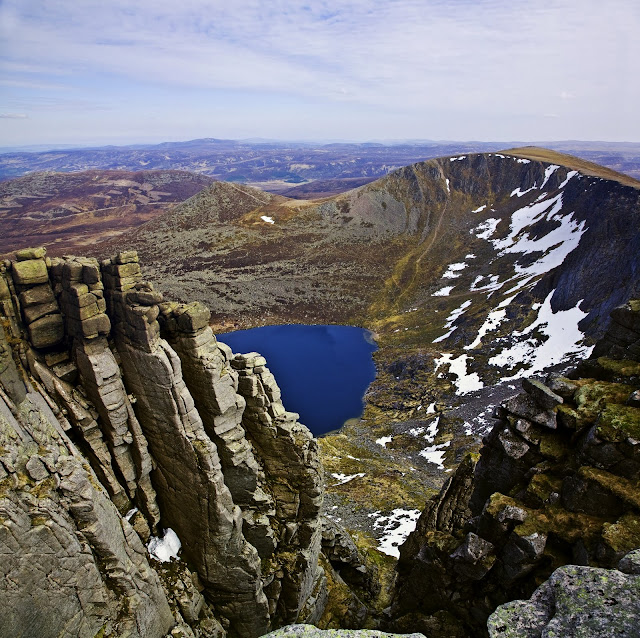 here's the second one I've ever done 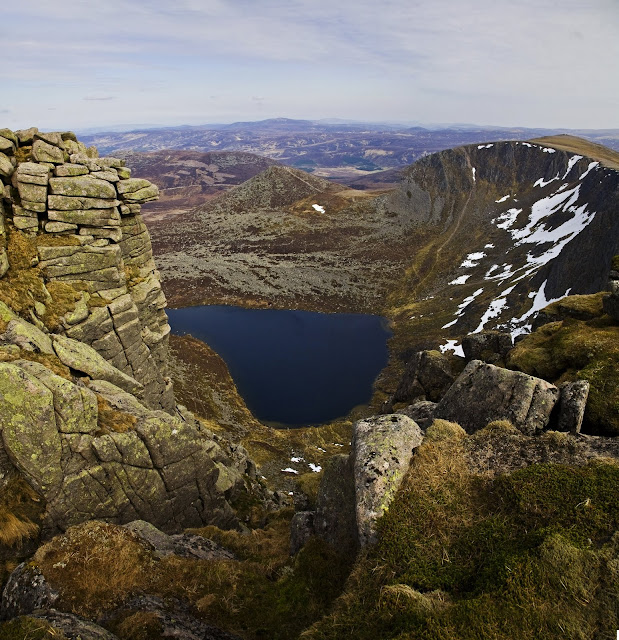 I was almost tempted to make a descent from the west buttress down and back around the loch as it didn't look too steep, but thought I'd better not push my luck 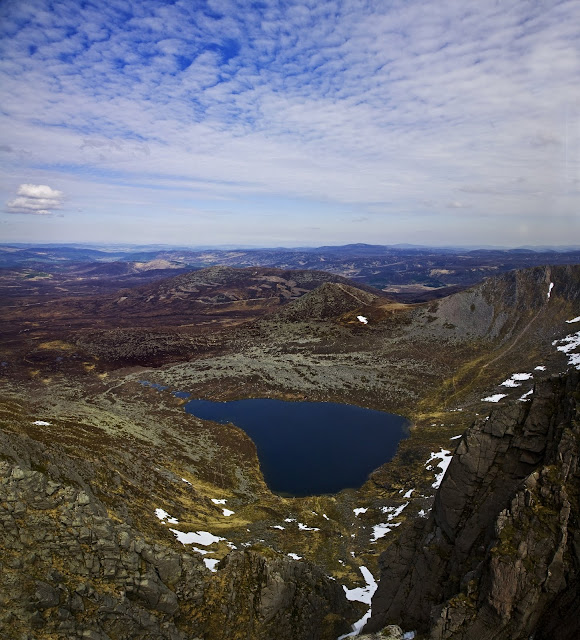 I started toward Carn a' Choire Nhoidheach with something in my head along the lines of "its only another 5k" (there and back) and that would be another double.......

thankfully something snapped me back to reality as I watched couple of walkers in the distance slowing during their ascent of that hill; I turned and headed back around the hill and the path toward home 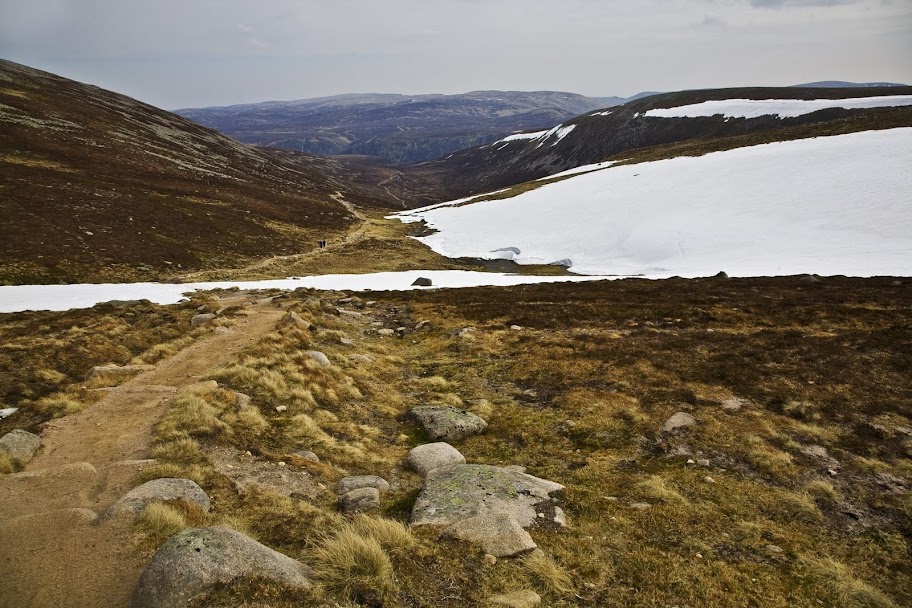 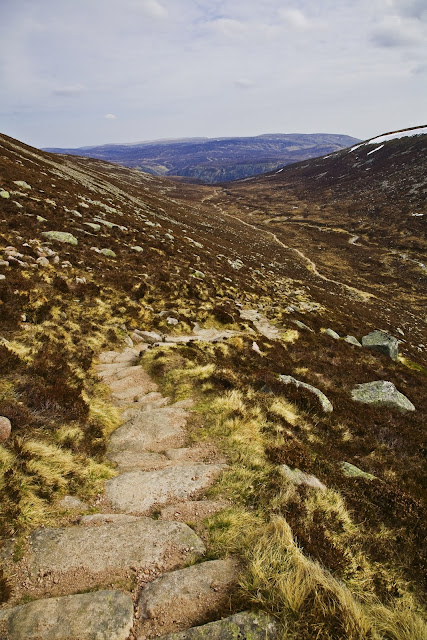 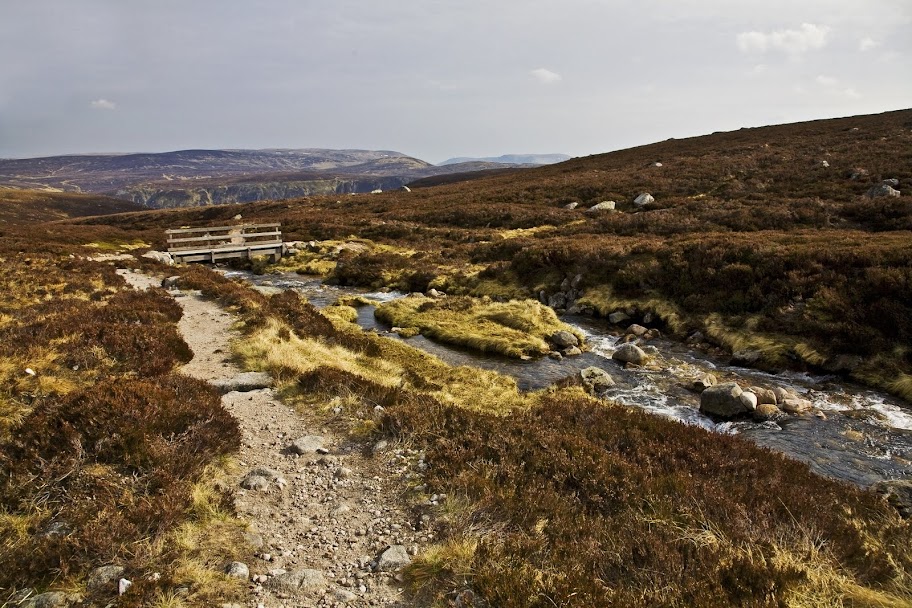 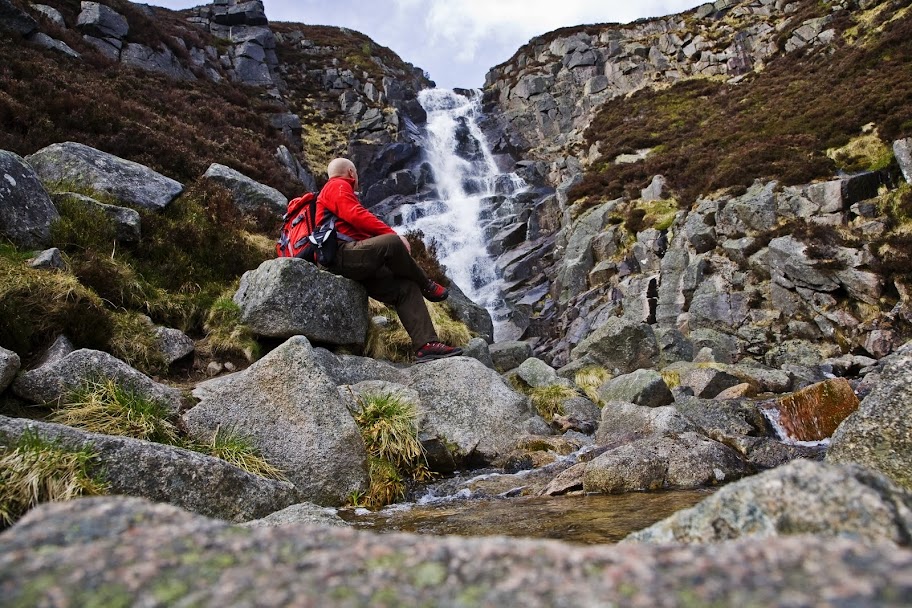 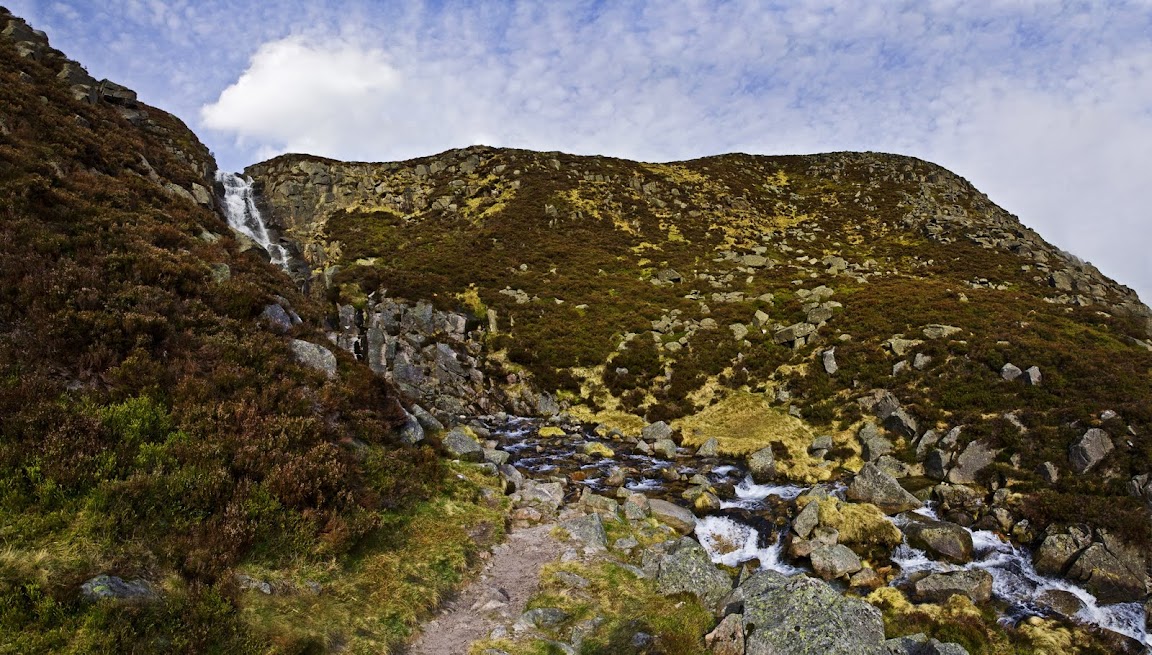 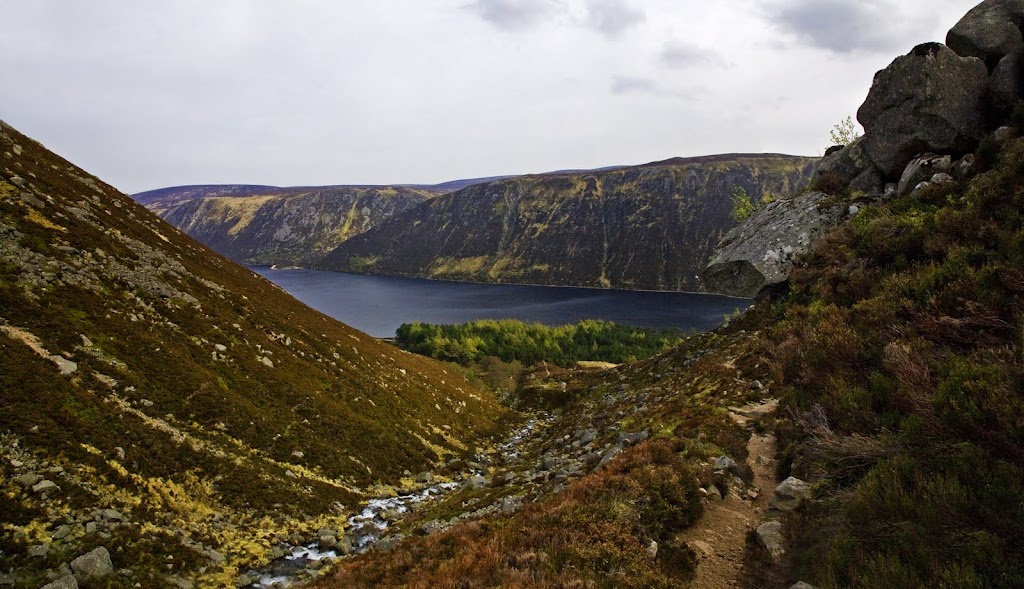 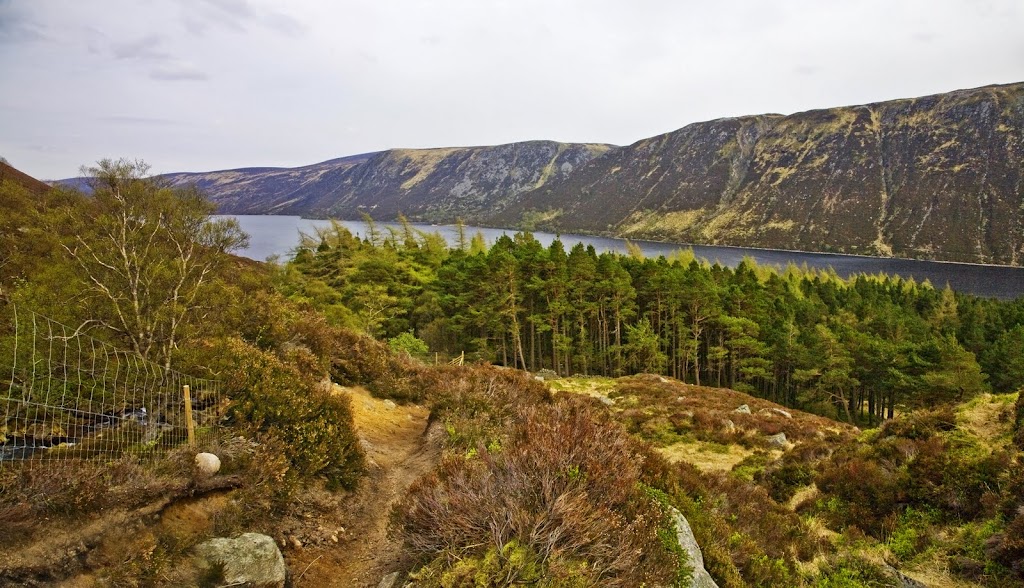 In the wood I took the bridge heading NE and away from the lodge, I didn't visit as I have seen it many times and never been asked in for a cuppa 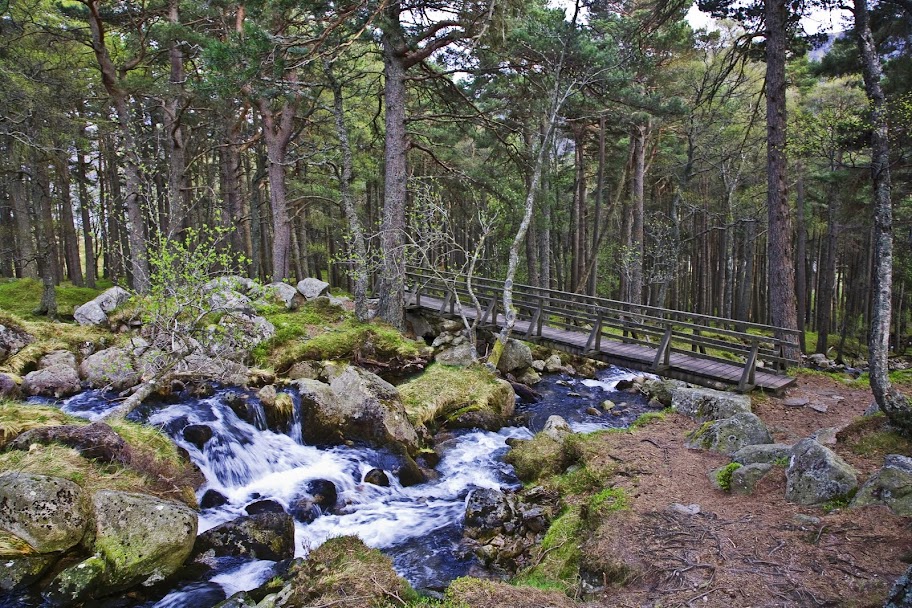 The woods open out to a disappointing track hemmed in by deer fence on one side and the steep glen side on the other, its just a hard pounding road along the loch to the boathouse 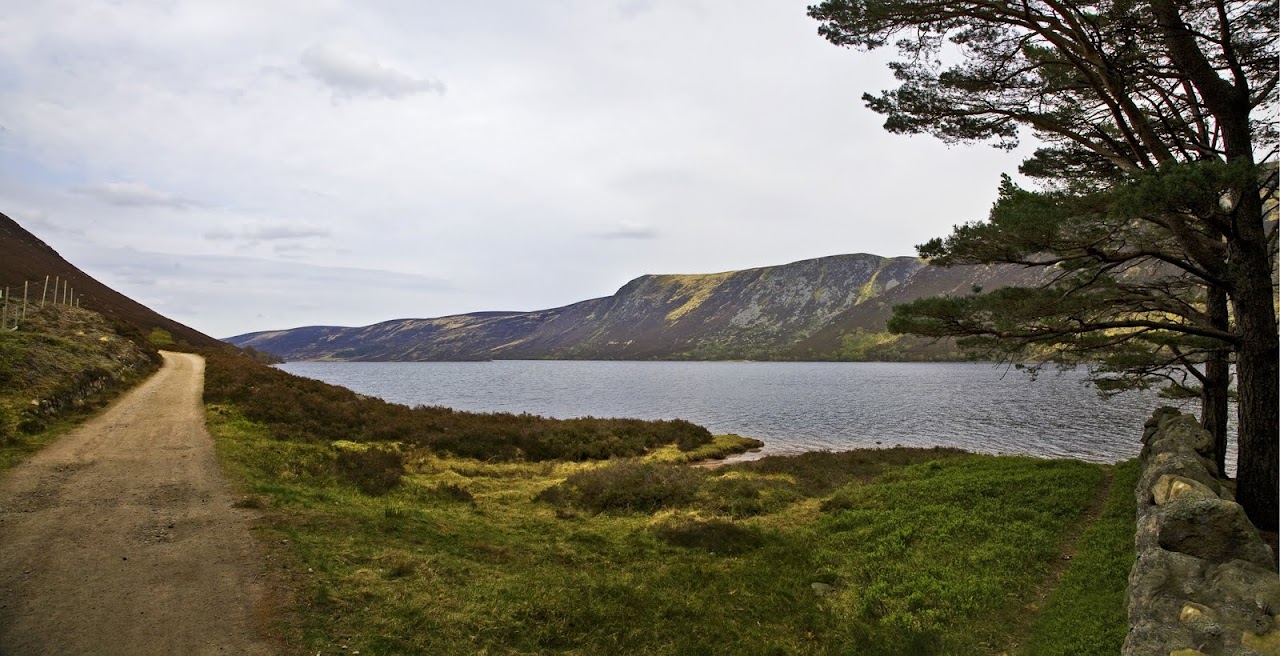 past the beach...tempting to have a little paddle here but can't be bothered to undo/redo boots

once across its a left turn and just 1k to go

just before heading into the car park I take a last look at lochnagar peering at me over little pap, I can even make out a little piece of the corrie to the left of Meikle Pap 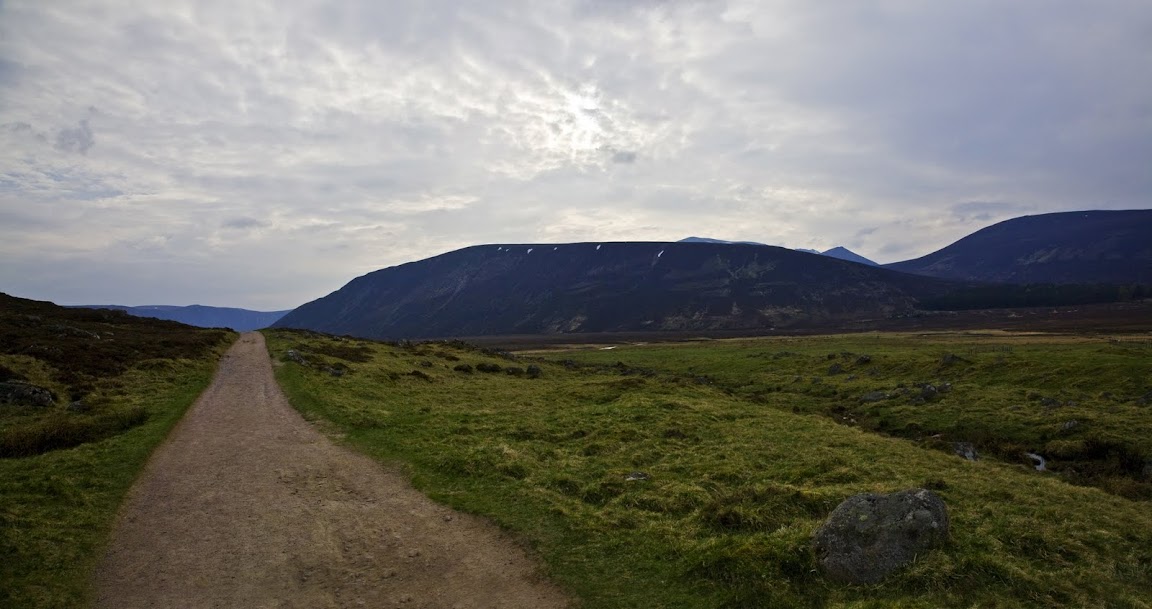 So my nemesis defeated, the leg/foot holding up well - I think I am as fully fixed as I'm going to be - now its just fitness.

This was a fantastic walk, stunning views all around the Cairngorms, beautiful weather and all the time in the world to enjoy it....fantastic

Classic stuff Chris and well done. I did the 5 hills there on a similar day last spring, wish I had thought to do a vertical pano - your's are excellent of the coire below the summit. Next time I walk with Gammy I'd like for you to come, you seem to have a knack for getting excellent skies, so maybe you could help balance out Gammy's knack for clag

Classic stuff Chris and well done. I did the 6 hills (Stretch done 5

) there on a similar day last spring. Mind you there was a ton of snow around and for a while we were in a whiteout. Your photos are excellent. Great stuff.

Classic stuff Chris and well done. I did the 5 hills there on a similar day last spring, wish I had thought to do a vertical pano - your's are excellent of the coire below the summit. Next time I walk with Gammy I'd like for you to come, you seem to have a knack for getting excellent skies, so maybe you could help balance out Gammy's knack for clag

Thanks Stretch, got lucky with the sky on this one as it did go a bit white and cloudless on a couple of occasions. Reckon I'll have to decline your kind offer as every report I read of you and Gammy in the hills its always p**sing down at some point.

Classic stuff Chris and well done. I did the 6 hills (Stretch done 5 ) there on a similar day last spring. Mind you there was a ton of snow around and for a while we were in a whiteout. Your photos are excellent. Great stuff.

No no no Chris, one is fine. Its a lovely munro to do on a good day. Truth is Lochnagar and the Corbett is harder than the walk around the other 4 munros. Its just a long walk. I am sure you would have no trouble extending your walks. Anyway just enjoy.

Some lovely photos there Chris, taking them all must have added 2hours onto your walk

Congratulations on achieving your landmark

Johnny Corbett wrote:Some lovely photos there Chris, taking them all must have added 2hours onto your walk

Congratulations on achieving your landmark

thanks JC - the photos are a big part of it for me, though to be honest when I decide I'm going to take one its only about 5-10 seconds to de-holster the camera, check settings and shoot.....I do need 2 hours for my constant breaks though - I'm great on the flat but steep hills

...I may have the wrong hobby

Cracking pics of a cracking hill

Was looking nice from the NW at the weekend

That was a superb report Chris, with terrific pictures especially at the edge of the corrie (that rock looked fab...!) Glad you got up there, how's the legs today?

Congratulations Chris - I know how much that meant to you

So pleased that your leg has now healed

"England thy beauties are tame and domestic
To one who has travelled the mountains afar.
Oh for the crags that are wild and majestic,
the deep haunting beauty of dark Lochnagar"

Cracking photos Chris - looks like you got the weather for good views aswell. I'm hoping to do Lochnagar in May so those pics should ensure i don't get lost!

. Brings back some great memories of this hill. Like Stretch, I did the 5 but will be back soon to do this route

. Also love the vertical pano shots - think I'll be giving them a go this weekend

Well done on achieving your landmark - now, what's next...?